Austin Long hands off to Bryce Johnson during Sweetwater’s game against Signal Mountain on Friday, Nov. 1. 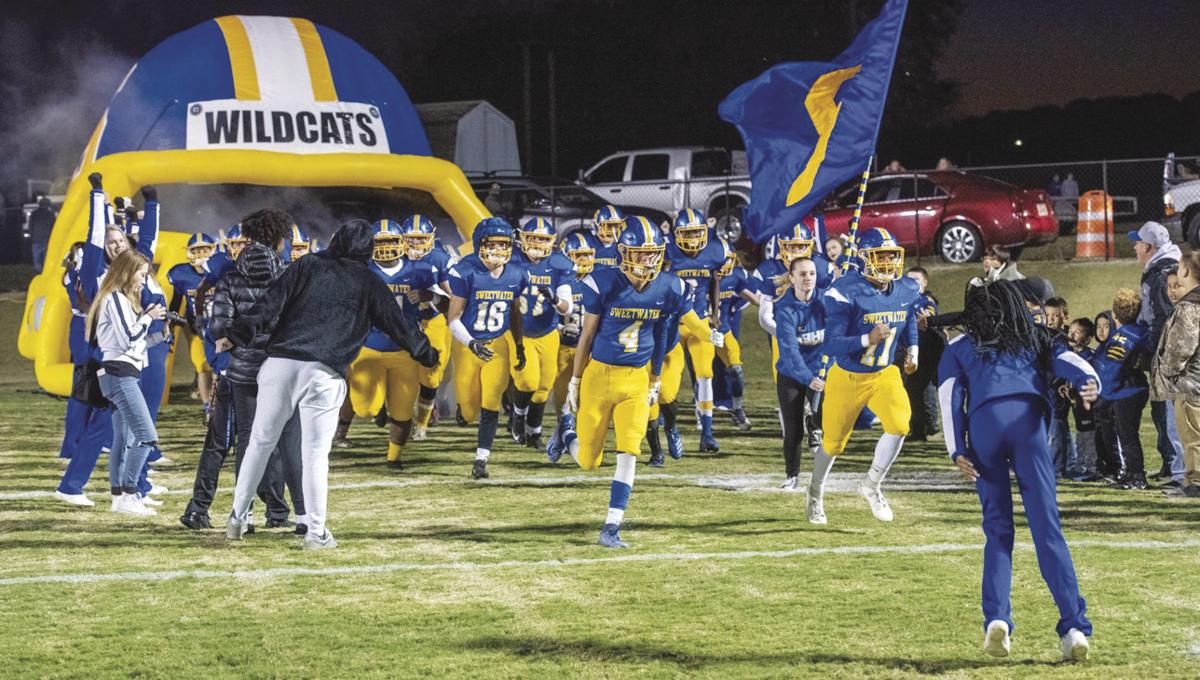 The Sweetwater High School football team runs onto the field during the Wildcats’ game against Signal Mountain on Friday, Nov. 1.

The Wildcats rallied from a 10-point deficit in the fourth quarter to force overtime and eventually pick up a 30-27 win on Senior Night. Sweetwater clinched third place in Region 3-3A with the victory.

“They fought all year,” Sweetwater head coach Mike Martin said. “I can’t even explain that. From what we went through in the third quarter to completely lose our composure and then to battle back, that tells you a little about our kids. This group has fought all year.”

Running back Drew Hicks lined up in the Wildcat formation to open the game and the first snap sailed over his head, where Hicks ran and fell on the ball.

Junior quarterback Austin Long resumed his normal position in the shotgun, only to see the second snap of the drive go flying over his outstretched arms as well. Then it happened to Long again.

The first three errant snaps resulted in a fourth-and-40 for Sweetwater (7-3, 3-2 Region 3-3A), which is generally a potent recipe on a cold November night.

Bryce Johnson would save the day on the defensive side of the ball — an omen for what would come later in the game. Johnson swooped in on third-and-goal, sacking Signal Mountain’s quarterback and forcing a field goal.

“We talked about it at halftime. That may end up winning us the game,” Martin said. “We could not have started the game any worse. I have never been a part of what you just saw. Three snaps over our head and then we punt it 10 yards out of bounds.

“For us to hold to three (points), that was huge.”

The teams traded blows for the rest of the opening half, as Sweetwater held a 14-10 lead at intermission.

Just as the first half had started, the Wildcats came out of the locker room and got off to a bad start. Signal Mountain drove the ball into the red zone and the Wildcats lost their composure.

Sweetwater was flagged for an unsportsmanlike penalty four times in the ensuing minutes, as Signal Mountain took advantage and punched the ball into the end zone to take the lead. The Wildcats gave up another touchdown late in the third quarter, putting them in a 24-14 hole.

Long did not panic, driving Sweetwater down the field on the first possession of the fourth quarter. Ben Brackett knocked in a 19-yard field goal to cut Signal Mountain’s lead to 24-17.

The Wildcats followed their offensive drive by forcing a turnover on downs on the other side of the field, giving their offense one shot to tie the game. Long took advantage, executing a 13-play, 68-yard drive.

University of Wyoming football to play at Texas in 2023

Long capped it off with a quarterback sneak on the goal line and Brackett calmly kicked the game-tying extra point with 38 seconds left in regulation.

Signal Mountain appeared poised to retake control on the opening possession of overtime, but Johnson leapt over the offensive line on third-and-goal a la Troy Polamalu, forcing a three-yard loss. The Eagles would kick a field goal to take a 27-24 lead.

“Our defensive guys know on that play on the half-yard-line, the only chance there is to get penetration,” Martin said. “You’ve gotta take a chance, and Bryce took a chance and dove over and grabbed his legs.”

Johnson wasted no time in sealing the game on Sweetwater’s ensuing offensive possession, as he carried multiple Signal Mountain defenders into the end zone for the game-winning touchdown on second-down.

The Wildcats’ seniors could very well have left their home field for the final time.

“I’m proud as heck of them,” Martin said. “There’s a chance that we could get back here in the playoffs, but if not, I’m proud that they can say they won their last game at Sweetwater High School.”