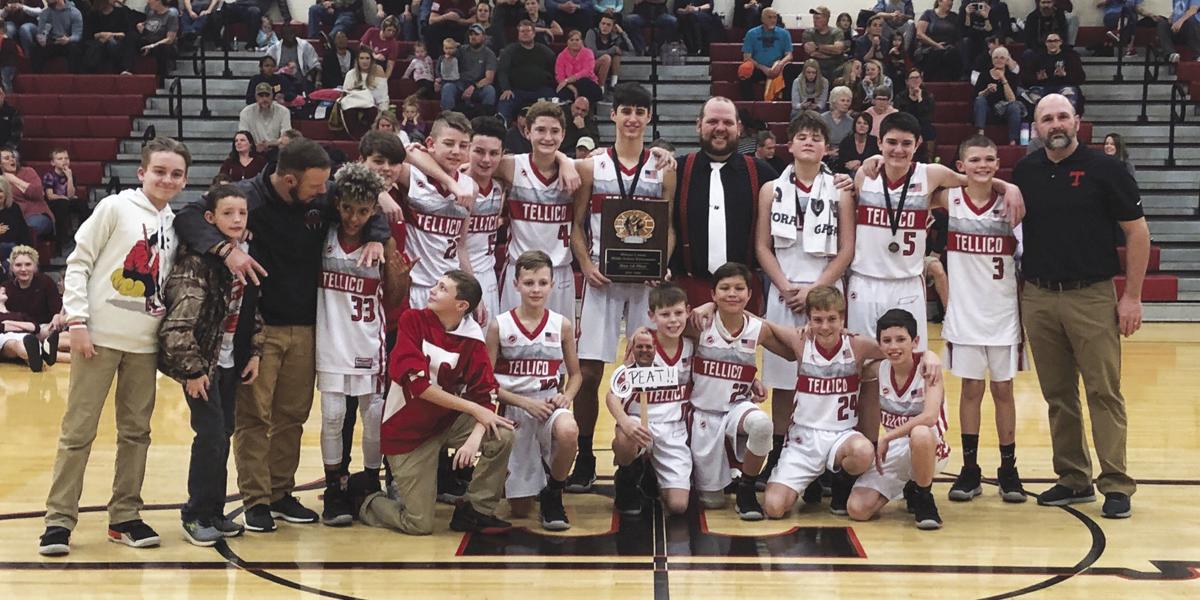 They wanted more. And they got it.

Tellico went 2-0 in the Monroe County Middle School Basketball Tournament through Friday and Saturday, easily dispatching Rural Vale in the first round before besting Madisonville in the championship game to claim its sixth straight title.

“The boys have (come) to work every day and did what we asked,” TPJHS head boys basketball coach Brad Abernathy said. “Unbelievable that we have won six in a row; it’s (come) from our boys buying in and not backing down from anyone.

“Our boys have formed a brotherhood and it matters to all of them, past and present. Meant a lot tonight to have a bunch of former players there supporting our boys.”

Madisonville’s boys found victory in their initial game of the tournament on Friday.

Vonore led 7-5 at the conclusion of a close first quarter, but the Eagles took a 20-16 lead during a quick, exhilarating second period filled with back-and-forth 3-point makes.

Madisonville stayed in control throughout the fourth period, not allowing Vonore room to cut through the deficit. The Eagles advanced to the championship round with the 38-30 victory.

The Cubs cruised to a Friday win to open their tournament tenure.

Tellico gained control early, shutting down Rural Vale’s offense. The Panthers’ first and only points of the quarter came on a buzzer-beating jump shot, ending the period with a 11-2 Cubs lead.

With Tellico’s height allowing for lots of rebounds and the Cubs connecting on multiple 3-pointers, they carved out a 28-8 halftime lead, followed by a 39-15 advantage by the end of the third quarter.

Get to know the Wisconsin Badgers' 2020 basketball scholarship recruits

The Panthers managed just four points in the fourth period as Tellico found it easy going, notching the 47-19 win and punching its ticket to the championship round.

Saturday was the Aaron Hunt show for Vonore.

He scored 15 points to push Vonore to a third-place finish in the tournament, hitting a jump shot less than 20 seconds into a quarter that saw the Blue Devils go up 13-4.

Hunt continued to lead Vonore offensively, and the Blue Devils notched a 35-8 lead by halftime. Vonore kept making easy work of it from there, heading into the fourth quarter with a 37-12 advantage and coasting to the 41-17 win.

Hunt led Vonore in scoring, followed by Ashton Stamey with 10. Allen Matthews had five points for Rural Vale, and Peyton Dodson and Riley Burnett had four.

The tournament’s finale was close for a while, but like everything else on the weekend, it all eventually fell Tellico’s way.

Madisonville went out to an early lead, but the Cubs came back to cut the deficit to two points, 8-6, at the conclusion of the first period.

Tellico tied the game, then took the advantage, during the second quarter; the Cubs were led by Chadwick Davis, who played with energy, defending opposing players tightly and finding lanes to score.

“Chadwick Davis was big time tonight,” Abernathy said. “Was all over the floor, tough as nails and refused to give an inch.”

The Cubs entered halftime ahead, 18-16, but the Eagles knotted the score, 18-18, once play resumed. The momentum quickly swung back to Tellico’s favor, though, as the Cubs retook the advantage soon after.

Davis swished a buzzer-beating 3-pointer to push Tellico to a 34-25 lead at the end of the third quarter.

The fourth period was all Cubs, as Tellico notched a double-digit lead and held control throughout the rest of the game, winning 51-37 and claiming its sixth consecutive tournament championship.

Davis was Tellico’s leading scorer with 17 points, while Rylan Woods had nine. Trent Peak had an impressive performance for Madisonville, totaling 24 points.

“So proud of the boys from the 37385,” Abernathy said. “They play smart, play hard and play together.”