Shown here is an ad for Harry T. Burn during his run for governor. 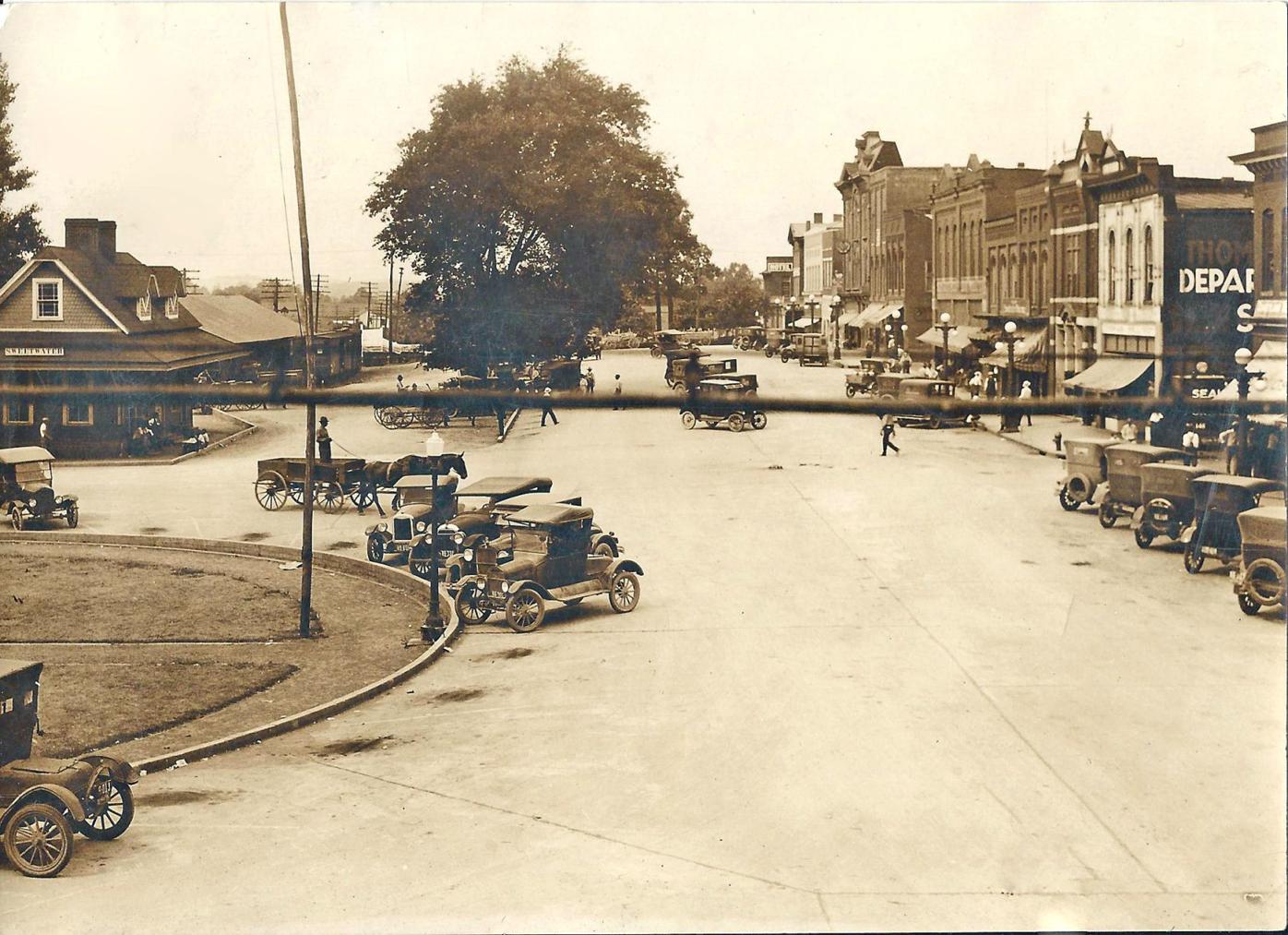 Shown here is the view of Main Street in Sweetwater from Harry T. Burn’s former law office in the 1920s.

Shown here is an ad for Harry T. Burn during his run for governor.

Shown here is the view of Main Street in Sweetwater from Harry T. Burn’s former law office in the 1920s.

Michael was raised in northern McMinn County on a farm between Sweetwater and Niota. He was the junior partner in a new law firm: Burn and Michael, Attorneys. His partner was Harry Thomas Burn, a native of Niota.

Harry T. Burn was a local hero who had made national headlines for his role in the ratification of the 19th Amendment to the U.S. Constitution. In August 1920, the Tennessee General Assembly convened for an “extraordinary” session to take action on the 19th Amendment.

If it were ratified, it would enfranchise millions of American women. The U.S. Congress proposed the amendment in June 1919. The amendment only needed one more state (3/4 of the then 48 states) to become national law. The ability to vote of millions of women across the country were in the hands of Tennessee’s state legislators.

Burn was the oldest of four children born to James Lafayette “Jim” Burn and Febb Ensminger Burn. The family lived on the corner of Main Street and Burn Road (the home no longer stands and is now the site of the fellowship hall of the First Baptist Church of Niota).

Jim Burn was the stationmaster at the Niota Depot and Febb Burn, who had worked as a teacher, ran the household. By 1918, Harry Burn’s sister Sara and father Jim had passed away. A week before his 23rd birthday, he won election as a Republican to represent McMinn County in the state House of Representatives. During this session, Burn voted for the “limited suffrage” bill that became law in April 1919.

This bill recognized the right for women to vote in Tennessee’s municipal and presidential elections.

When Burn left for the extraordinary session in August 1920, he had planned to vote to ratify the 19th Amendment. Upon his arrival in Nashville, both pro- and anti-suffrage forces attempted to influence his vote. He received telegrams from his constituents back home in McMinn County misleading him about the district’s stance on woman suffrage.

One telegram claimed that “over 90%” of the people in the district opposed suffrage. Despite the fact that national political figures wrote to him urging him to vote yes, Burn faced immense pressure from politicians in Nashville that threatened to end his political career if he voted for suffrage.

A few days into the extraordinary session, Burn appeared to have moved over to the anti-suffrage side. His move terrified the suffragists who had worked so hard to get the amendment proposed.

When approached by the suffragists, Burn told them that he could not “pledge” himself at the moment, but promised that he would “do nothing to hurt them.” Unconvinced by his assurance, the suffragists had little faith he would help their cause.

Although not a political activist, Febb Burn had been following the woman suffrage campaign for years. When she read the newspapers over the weekend of Aug. 14-15, she read a “bitter” speech given by State Sen. Herschel Candler (her own district’s senator and her son’s mentor) blasting the idea of women voting.

Taking a break from her daily farm work, she sat down in her “little chair” on the front porch and wrote a letter to her son. Having run out of ink, she wrote the letter in pencil.

The most famous line of this now legendary letter read: “Hurrah and vote for suffrage and don’t keep them in doubt. I noticed Chandler’s (sic) speech. It was very bitter. I have been watching to see how she stood, but have not seen anything yet.”

Her other son Jack (my great-grandfather) took the letter to the Niota Post Office, addressed it in ink, and mailed it to his brother Harry at the state capitol.

The timing of the arrival of this letter in Nashville could not have been more impeccable. On the morning of Wednesday, Aug. 18, 1920, a House page delivered

the letter to Harry Burn on the steps of the state capitol.

At 10 a.m., the state House of Representatives convened. House Speaker Seth Walker, who had recently betrayed the suffragists and joined the side of the antis, called for a vote to “table” the resolution to ratify the amendment.

Walker and many of the state legislators wished to delay action on the resolution to avoid taking a stand on the issue. After all, election day was less than three months away.

Burn believed in woman suffrage and wanted to vote yes. He also wanted to have a future in politics and thought that his district was staunchly opposed to the amendment.

The threats against his political career were also on his mind. He was content to delay action on the amendment until the next regular legislative session in January 1921. He was not even sure he would be reelected in November.

In his mind, tabling the amendment seemed to be the most prudent course of action.However, Walker’s next move changed everything.

He thought he had the votes to kill the amendment for good. He called for a vote on the “merits” of the resolution to ratify. A 48-48 tie would shoot the amendment down in the state, maybe even in the country.

Every other southern state had already rejected the amendment. If Tennessee voted it down, millions of American women would not be able to vote in the 1920 general election and the amendment’s momentum would have slowed even more.

Burn had promised to not hurt the cause of the suffragists. Taking his mother’s advice, Burn voted “aye” on the “merits” of the resolution to ratify the amendment.

This broke the tie and the amendment was ratified. It was pandemonium in the state House chamber as the suffragists celebrated their victory, 72 years in the making.

Harry Burn did not arrive at this pivotal opportunity by himself. In 1848, when his grandfather was growing up on a farm in the Mount Harmony community in McMinn County, Elizabeth Cady Stanton led a group of hundreds of women at the

They demanded the right to vote and stated: “all men and women are created equal.” Stanton’s best friend was Susan B. Anthony, a fellow social reformer and suffragist. One year before Febb Burn was born, Anthony voted illegally in the 1872 election and was later convicted in court.

While Harry Burn worked as a railroader, Alice Paul and Sue Shelton White were jailed for protesting discrimination against women in front of the White House during World War I.

Carrie Chapman Catt, president of the National American Woman Suffrage Association, worked for decades to organize lobbying campaigns and deliver speeches helping to win the vote for women across the country.

The culmination of the efforts of these women resulted in Tennessee being able to ratify the 19th Amendment. Harry Burn was fortunate to be able to play a small, but crucial role.

Despite what many books and newspapers have printed over the years, Burn was not chased by an angry mob of anti-suffragists after casting his deciding vote.

He fought back against accusations of bribery and told his colleagues on the house floor that “a mother’s advice is always safest for a boy to follow.”

The story of Burn’s deciding vote was reported on the front page of newspapers across the country.

After a close reelection in November 1920, Burn served a second term in the state house.

Sweetwater to open up his own firm with his junior partner: Winfred Earl Michael, nicknamed “W.E.”

The second floor of the Scruggs Building (New Block) housed Burn and Michael’s law offices. They had a great view of Main Street facing southwest. Hunter’s Café is now located below their former office space.

In 1930, at Michael’s urging, Burn made an unsuccessful run for governor of Tennessee. Michael served as his campaign manager and their law offices served as campaign headquarters.

Harry Burn lived in a home on McCaslin Avenue and later lived in a room at the Hotel James Monroe before he moved back to his antebellum Niota home.

Burn married Ellen Cottrell in 1937 and the couple raised their son, Harry T. Burn, Jr., in the community. Ellen Burn briefly taught in Madisonville and later taught English at

Burn once called Sweetwater “the best small town in America.”

In 1948, Burn won election to the state Senate in 1948, representing Monroe, McMinn, Bradley and Polk counties.

Due to some of Burn’s local legislation, he had a falling-out with W.E. Michael. Michael vehemently opposed Burn’s bills to ban the sale of beer in Sweetwater. Burn also caused controversy over his legislation to expand the city limits.

Burn secured successful legislation to improve the highways and build a new school in Sweetwater. After two terms in the state Senate, Burn left Sweetwater to work in Rockwood.

By the 1960s, Michael won election to the state legislature and practiced law with his late son, Van R. Michael, and later with J. Reid Dixon.

An examination of Burn’s life and career demonstrates that his impact on the lives of his fellow Tennesseans extends beyond his deciding vote to ratify the 19th Amendment.

Burn remained active in state politics until his death in 1977. He lies at rest in the Niota City Cemetery.

Harry Burn was my great-granduncle. My new book, “Tennessee Statesman Harry T. Burn: Woman Suffrage, Free Elections and a Life of Service,” was published in August by The History Press.

The book is available at www.arcadiapublishing.com and is for sale at Barnes and Noble, Books-a-Million and various museums in Tennessee.

I wrote the book to chronicle Burn’s life in a single-source for the historical record, to debunk the apocryphal stories about his vote for suffrage, and to help celebrate the upcoming centennial of the 19th Amendment.

I teach social studies in Lenoir City and this is my first book. I believe us East Tennesseans are fortunate to have such a legendary figure as part of our history.