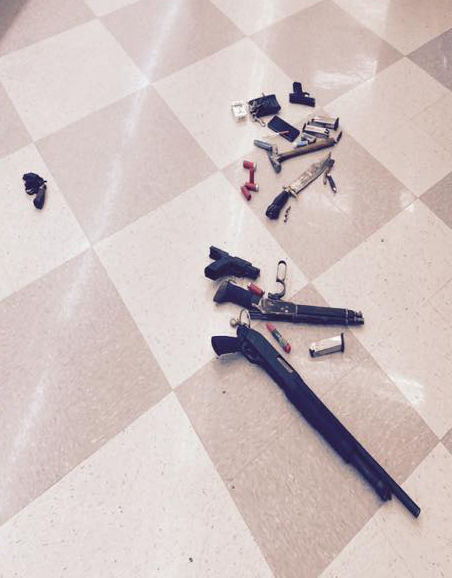 Shown here are the firearms, ammunition and knives reportedly confiscated from two suspects during a burglary of Ingles on Sunday. 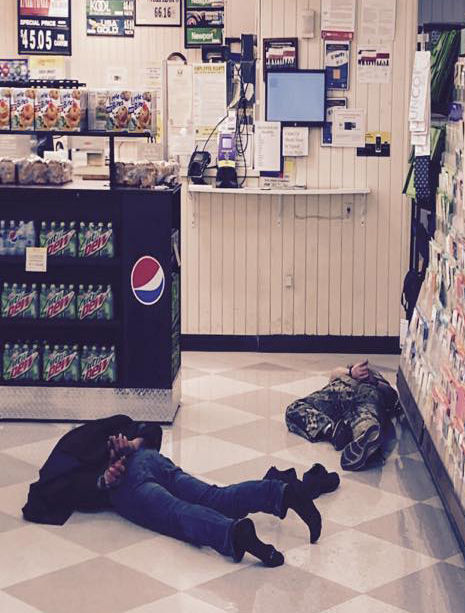 Shown here are the suspects arrested during the reported burglary at Ingles in Madisonville Sunday.

Shown here are the firearms, ammunition and knives reportedly confiscated from two suspects during a burglary of Ingles on Sunday.

Shown here are the suspects arrested during the reported burglary at Ingles in Madisonville Sunday.

A burglary at Ingles in Madisonville over the weekend that apparently started over a dispute led two men to be taken into custody.

At almost 6 a.m. on Sunday, Madisonville Police Department officers were dispatched to the Ingles, located at 4629 Highway 411, on the call that there were two men armed with firearms. The two men – identified as Vitus Harrington Boring, 39, of Madisonville, and Steven Ronald Vance, 33, with no address listed – reportedly made entry into the business while it was closed and an altercation ensued.

Present during this, according to authorities, were several Ingles’ employees, who called 911. Officers quickly arrived and gave verbal commands with weapons drawn to both the men.

The suspects were then taken into custody without further incident.

“No injuries were reported to any of the employees, suspects or officers thanks to the calm and very informative work done by the Monroe County E-911 Center,” stated a news release from the Police Department.

A total of five firearms were reportedly located, along with ammo and several knifes.

“This is a prime example of no matter what day or time, a violent crime such as this can occur at a moment’s notice,” the release continued. “We are very proud of the actions of both members of our night and day shifts, and believe their quick response saved lives this morning.”

According to the report from the incident, Boring and Vance had been visiting a mutual friend at a residence on Pine Street when an argument began over one of the men previously shooting the other with one of the guns.

As a result of the argument, Vance reportedly left the residence and Boring followed, with both ending up in the Ingles’ parking lot.

Once there, the men allegedly continued their argument as they entered the store, which was not yet open.

The men continued arguing inside the store with “firearms brandished” until police arrived on scene.