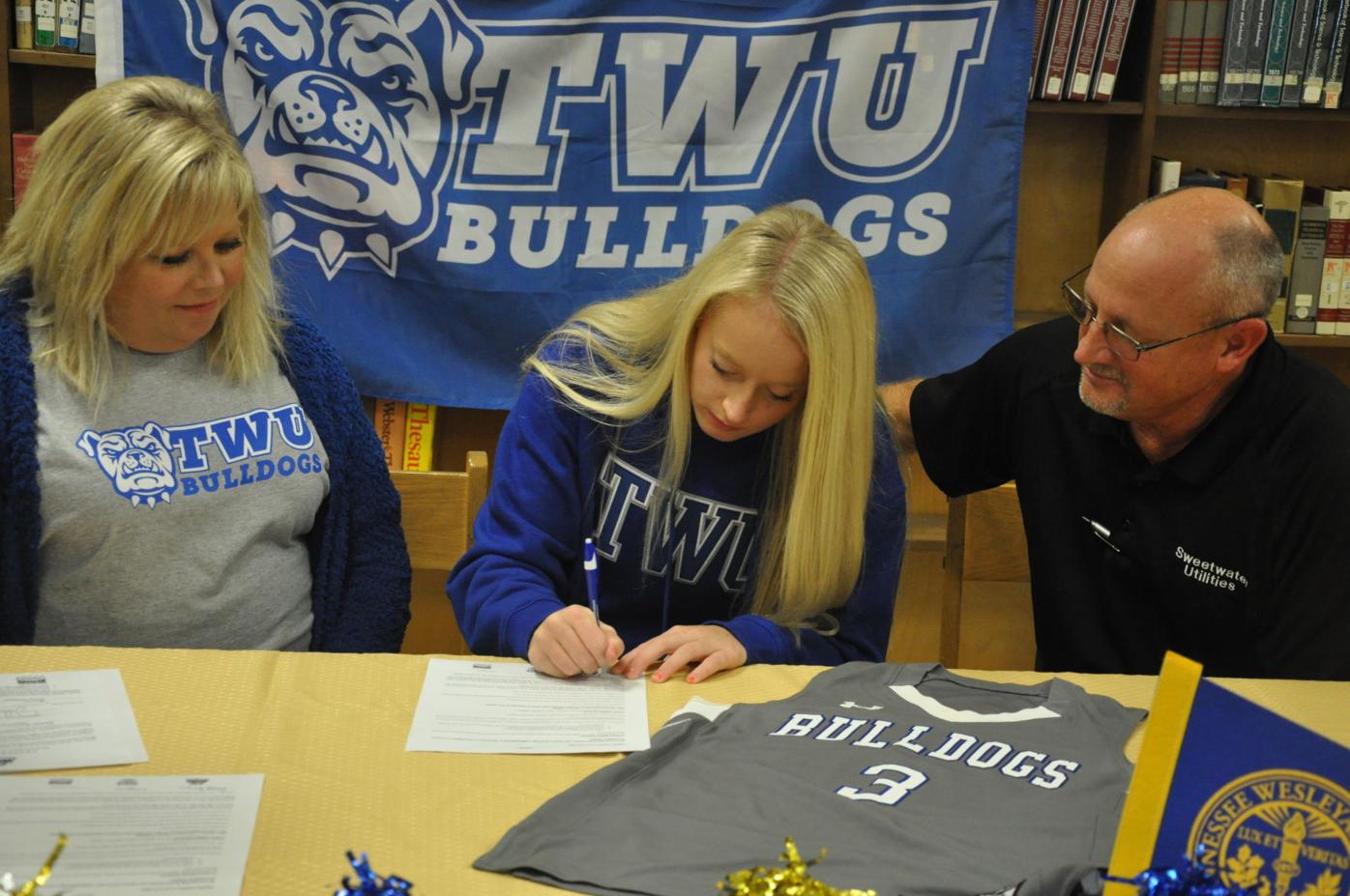 Abbey Barr (center) signs her letter of intent with Tennessee Wesleyan women’s basketball. Her parents, Becky Barr and Richard Barr, sit along side her at Sweetwater High School on Thursday. 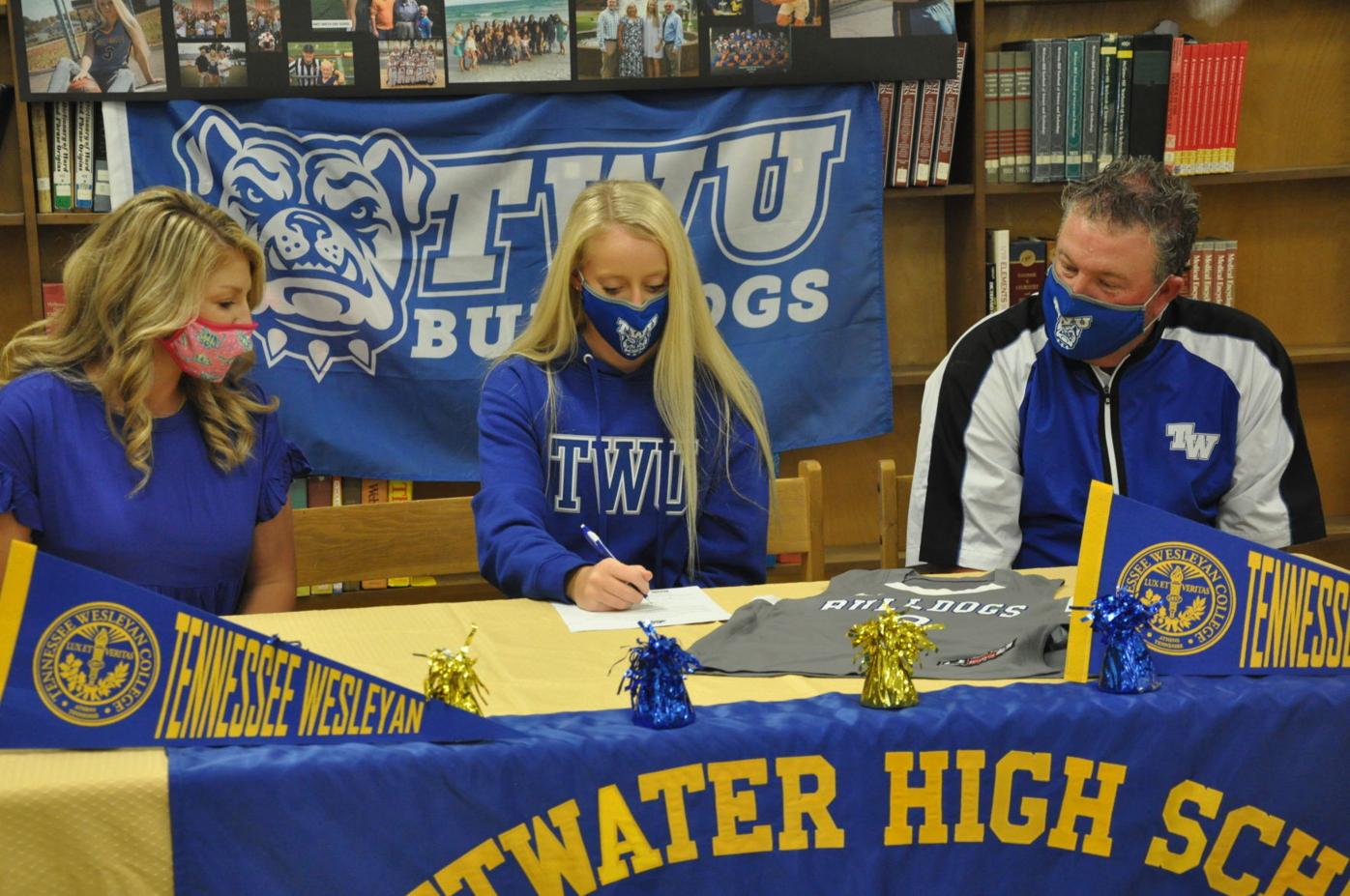 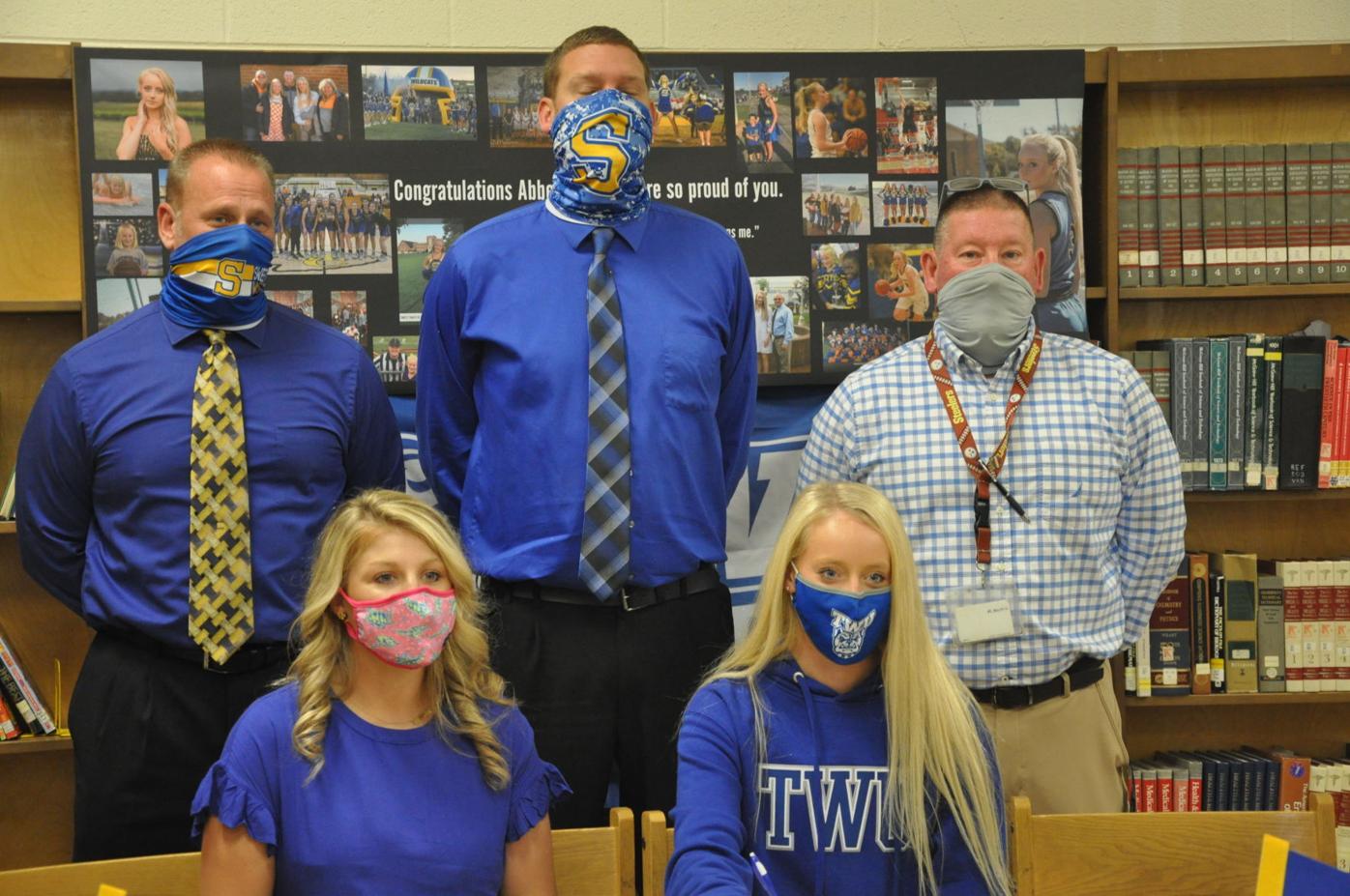 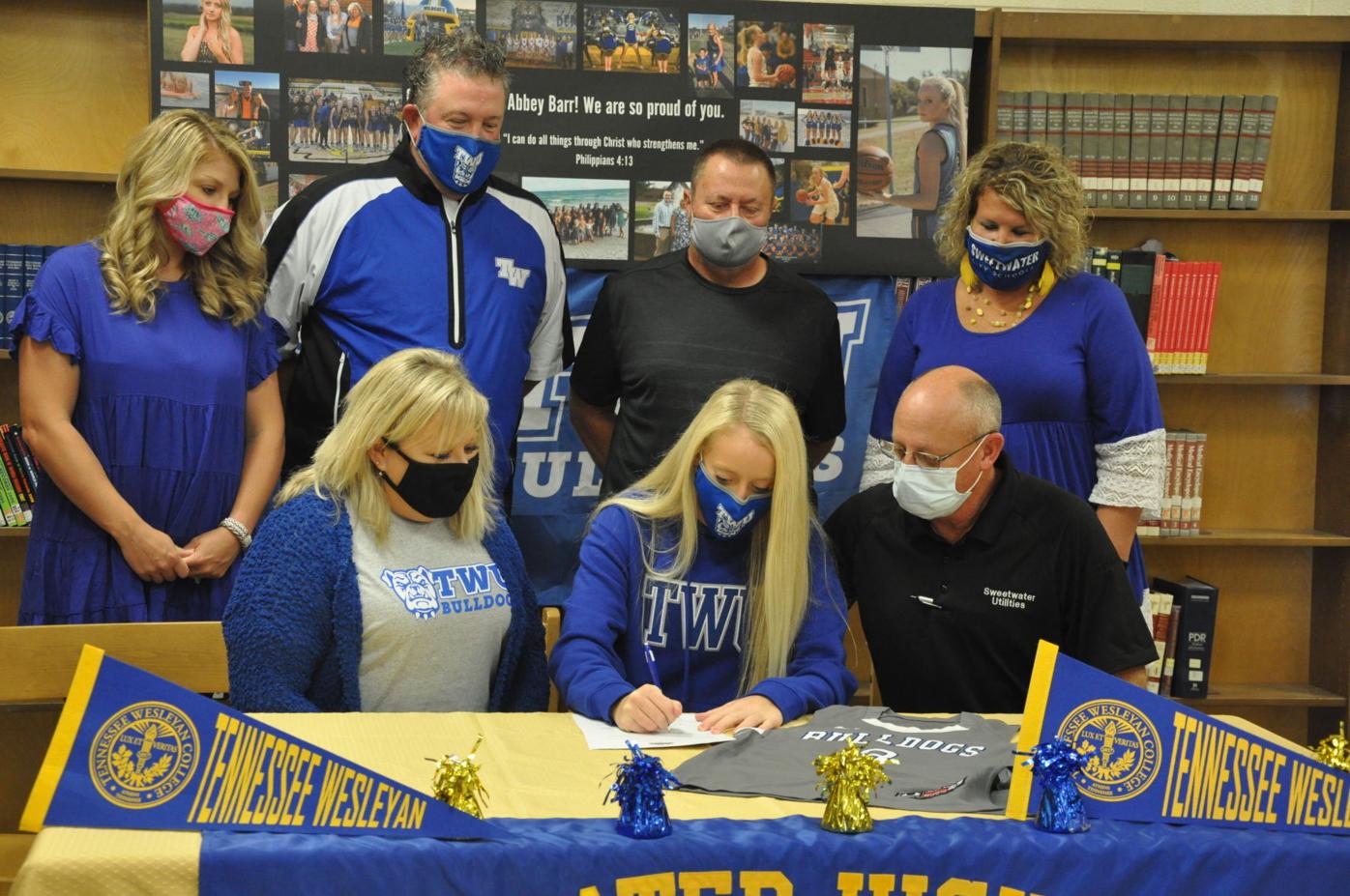 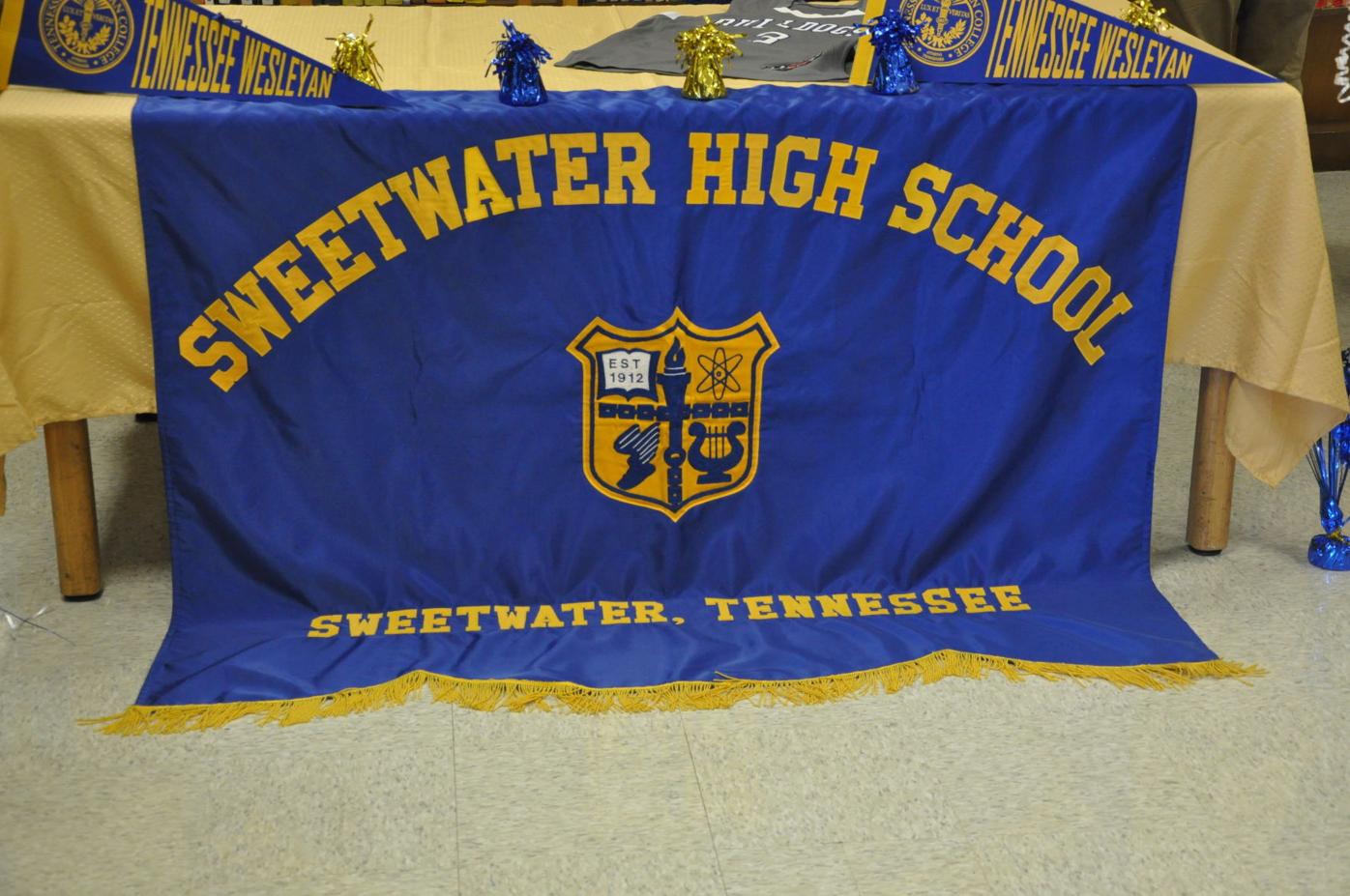 A Sweetwater high school banner rests on a table on Thursday, Oct. 22.

Abbey Barr (center) signs her letter of intent with Tennessee Wesleyan women’s basketball. Her parents, Becky Barr and Richard Barr, sit along side her at Sweetwater High School on Thursday.

A Sweetwater high school banner rests on a table on Thursday, Oct. 22.

Abbey Barr, in front of limited friends and family due to COVID-19 restrictions, took the next step in her career as a basketball player.

The Sweetwater senior signed her letter of intent, ensuring that she will be joining five other girls she played with growing up at Tennessee Wesleyan University in Athens.

“It feels pretty good. I have worked hard and I still have a lot to learn,” Barr said. “I am excited to carry it on to college and learn under (TWU Jeff Rice).”

For Barr, keeping things local with Rice was a big factor in her decision.

“They recruit local and it is close. Coach Rice gave offers to me and five others girls that I played AAU with and that was something I really looked forward to was staying close to home and playing with those girls,” Barr said.

The feeling on the other side is more of the same.

“The main thing is she is local. We try to sign all the best local kids that we can,” Rice said. “We feel like we are getting a good one with Abbey. (She is) a kid who can handle the basketball, shoot the basketball, she plays at high level for a long time. Her high school coach, Heather, has done a good job with her and she has gotten better as she has played. She has played with a great AAU coach in Jon. We think the sky is the limit for her. She can come in and play a lot and have a good four-year career.”

With Barr, TWU is picking up an experienced shooter who carries four years of experience as a starter with her.

“She has good size for a point guard. She shoots it really well and she plays real hard. I think she embodies that really well. She handles and shoots well. I think her best basketball is ahead of her,” Rice said.

However, Rice and TWU had their eye on her before she stepped onto the Wildcats’ court.

“She has been coming to camp at Wesleyan since she was little,” Rice said. “I probably first saw her fifth or sixth grade. You can just tell with some kids that those are the kids you are probably going to be recruiting in six to seven years. She has progressed very nicely, has gotten better along the way, and that is what we are hoping for over the next four years.”

Before Barr bursts beyond to her career as a Bulldog, she’ll play out her senior season with Sweetwater.

“We know that this took a lot of hard work and effort and a ton of practices and games to get to this point,” Sweetwater girls Coach Heather Jaramillo said. “We could not be more proud of who she is as a player and what she brings to our team on and off the court, in her walk with Christ, and what she does in the classroom. We can’t wait to watch her play at the next level.”

Jaramillo, a former Sweetwater and TWU standout herself, saw Barr as a special talent early into her playing days.

“She came in as a freshman and I told her from day one she has no choice but to be our starting point guard,” Jaramillo said. “She stepped into that role and it takes some time being a freshman point guard, but let me tell you she never hesitated. It took a little bit to give her confidence when you are playing seniors as a freshman, but she took the challenge head on. I never had to worry if I was going to have to count on her or not.”

Coming into that role, Barr had to learn quick and she had to learn fast. The unique situation of playing against talent that has had more time to develop and grow can quickly turn into a daunting task, but Barr showed she can handle it.

“Starting as a freshman, I think, brings less pressure because you are seen as a freshman. I think the more pressure comes when you’re a senior and you’ve started for four years,” Jaramillo said. “As a player, she has evolved and continued to grow. She is attacking and she has great ball handling skills, and obviously she is a good shooter. She has the full package when it comes to who you want leading your team.”

Flash forward three years and she has turned into the centerpiece of a Wildcat team that seeks to improve on two consecutive appearances in the region quarterfinals. Barr is going to be key to those goals with what she offers as a senior on the court.

“She brings fire and spunk. She is the point guard so she is obviously the leader of our team. How she portrays herself on the court is how everyone is going to follow and we know that we can count in her to bring that,” Jaramillo added. “I have watched her over the last two years how much leadership she is bringing over workouts and practices. We are looking forward to what she is going to give our team this season.”

Of course, reaching this point has not been easy. To play at the next level, Barr had to dedicate much of her life to basketball. Shooting hoops and working on her handling was not subjected to the preseason and practice. It was a yearlong endeavor.

In working on that, she met a few of her future teammates playing AAU.

“She is dedicated in playing AAU too,” Jaramillo said. “When you see a player who wants to play all the time and you know is not afraid to put in the work then you know they can excel at the next level. She loves the game so much, that when you eat, breathe and sleep it is no problem going to the next level. She has always played spring, summer, fall, winter so we know she can continue on at the next level.”

Off the court, Barr is going to major in Pre-Occupational Therapy, with intentions of becoming an occupational therapist.

“I always wanted to go into healthcare and I have been job shadowing in high school. Just wanting to work with kids and adults to get the range of motion back in their body is something I think is really cool,” Barr said.

Rice, who enters his 15th season at TWU, has been sticking to the theme for some time, a theme that got started before he arrived at James L. Robb Gymnasium.

“Coach Harrison (predecessor for 25 years) signed the best local kids he could and I think I have done that with both sports, men’s golf as well,” Rice said. “That is important to me is the local kids who I think are really good players have the chance to have a good program to go to and play and a place where family and friends can come and watch them play. That is kind of the main thing I want us to be is to get the best local kids we can, keep them here and be a good basketball team.”

TWU’s women’s basketball roster for the 2020-21 season is comprised entirely of local talent. All 14 players come from East Tennessee and Mikalee Martin and Shelby Watson of Sweetwater and Chloe Yearwood already represent Monroe County on the squad. The farthest player on the roster hometown is under 80 miles from campus.

“We feel really good (about our recruiting class),” Rice said. “Abbey is the first one we got signed and we have four commitments from kids from Meigs County. That gets our local theme of wanting to keep kids close to home and, hopefully, play in front of a full gym.”