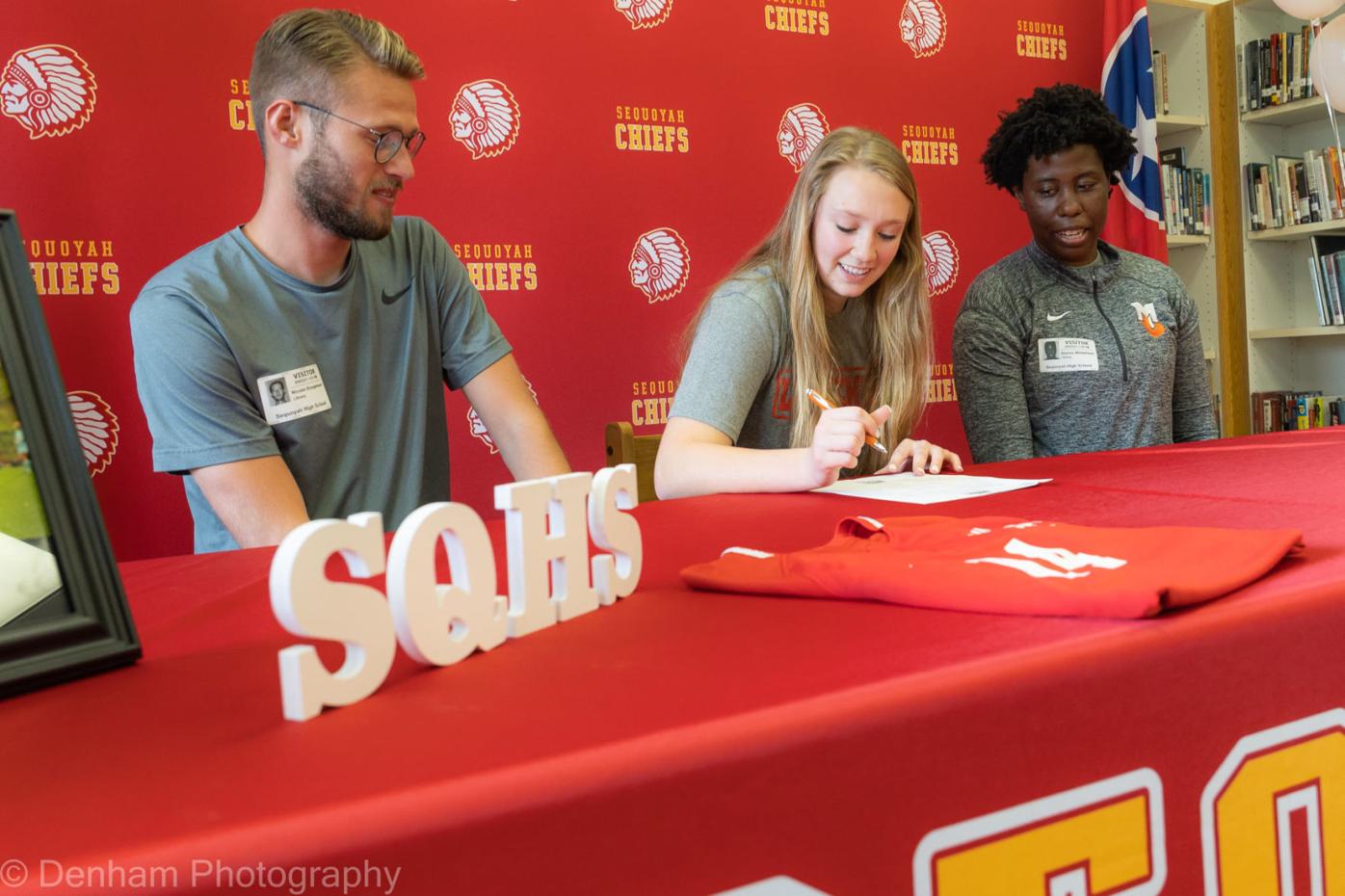 Kenzie Wilke (center) signs to play soccer at Milligan University along with Milligan coaches Nick Boegemann (from left) and Alyssa Whitehead on May 3 in Madisonville. 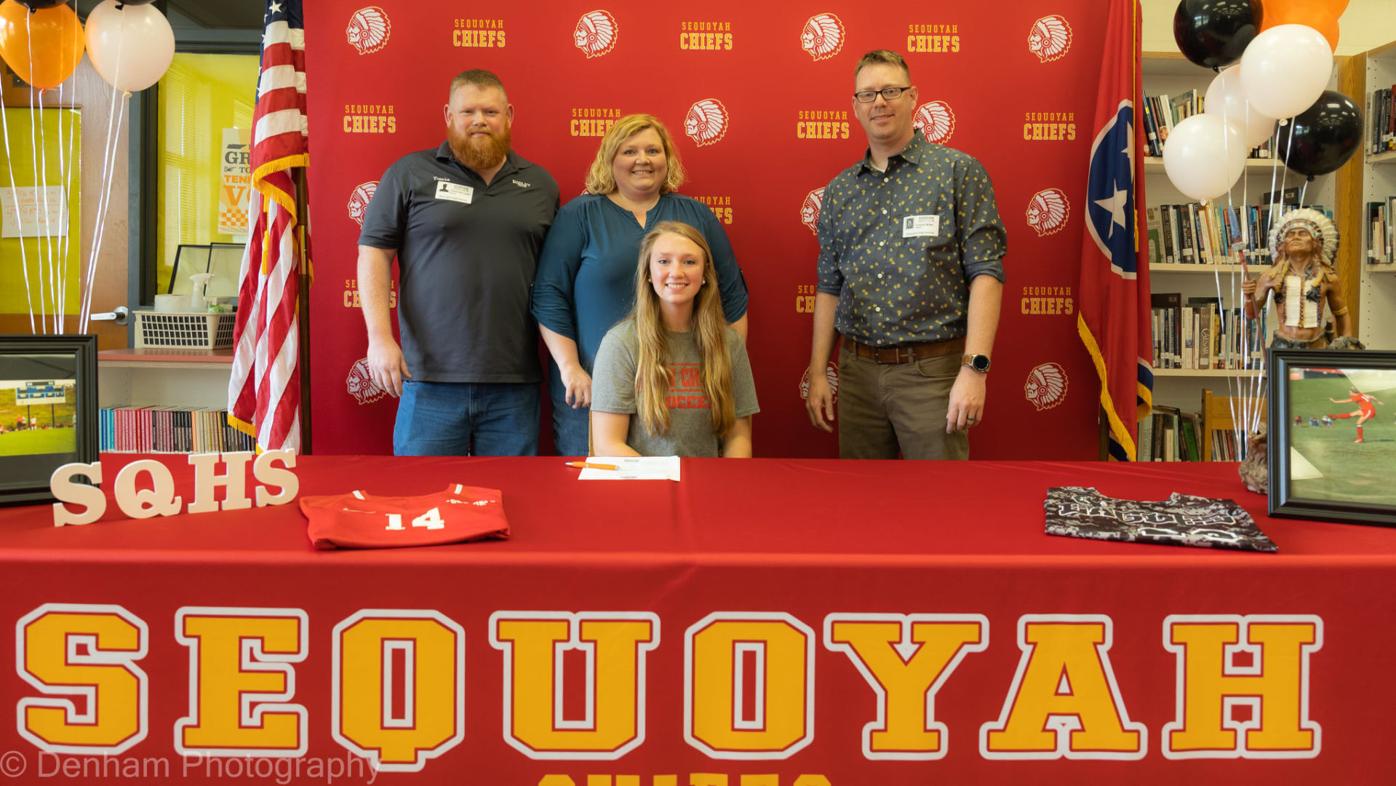 Kenzie Wilke (center) poses for a photo with (from left) Travis Williams, Sherry Williams and Freddie Wike after Kenzie Wikle signed to play soccer at Milligan University on May 3 in Madisonville.

Kenzie Wilke (center) signs to play soccer at Milligan University along with Milligan coaches Nick Boegemann (from left) and Alyssa Whitehead on May 3 in Madisonville.

Kenzie Wilke (center) poses for a photo with (from left) Travis Williams, Sherry Williams and Freddie Wike after Kenzie Wikle signed to play soccer at Milligan University on May 3 in Madisonville.

At the time she didn’t know what the game would give to her, but over the past few weeks she has seen what it is capable of.

The Lady Chiefs’ senior captain signed with Milligan University to continue her playing career. As the center back steps forward to the next level, she reflects on the memories and friendships that she didn’t know were coming her way when she first put on a pair of shin guards.

“Absolutely the friendships (stand out). I bonded with these girls ever since freshman year,” Wilke said. “They have become my best friends since. Early morning practices and games, being together all the time … they have grown to be my sisters. That is what I am going to miss.”

Over the past couple of months, Wilke started to get serious about playing at the next level. That meant looking back at what made her excel with Sequoyah. Wilke didn’t mind taking the physical challenges and the role of organizing the Lady Chiefs defensively. In doing that, she set herself up for success, but also turned into an example for the younger players on the roster.

“(It was) realizing that I had such an impact on the younger people, like freshmen coming up to me and telling me that they appreciated me and that I really helped them to push themselves. I feel like that is one of the things that inspires me so much,” Wilke said. “It really calls for me to help out, take over and be a captain. I feel like I need to not only teach them how to play, but how to treat other players.”

Luckily for Wilke, that leadership mentality is what Alyssa Whitehead was looking for heading into her first season in charge at Milligan.

“I think (she is a) natural leader. She is just an awesome person,” Whitehead said. “For us culture is very important and she has all the pieces of the puzzle for that. She came to our camp. Sometimes when you see a player play you know they are a good fit, and that is how we feel about her. Her presence, her energy and her work rate are going to be great for our program and our team.”

Whitehead plans to slide her new signee into the backline and expects Wilke to be involved early into her career with Buffalo soccer.

“We see her as a center back or an outside back,” Whitehead said. “For me, going from high school to college is a big transition, but I think she is the type of person who can see what is going on around her and adapt quickly. I see her as a leader — that is probably scary coming in as a freshman, but I think she has the natural quality to do that.”

Despite starting her playing career as a freshman in high school, Wilke showed her ability to be a gamechanger early, according to Sequoyah Coach Lindsay Liszeski.

“Kenzie has showed a lot of promise since the beginning,” Liszeski said. “We have had her all four years and every year she has shown great improvement. I don’t know if there was one defining moment, but for four years we watched her grow and progress as a person and an athlete.”

School's out for summer, but Huskers in for busy, compacted 'third quarter' of 2021

Wilke, who also fielded offers from South College and Tennessee Wesleyan, started to get involved once she got comfortable on the field. That growth as an athlete gave the familiarity to take over a game defensively.

“I like to take over,” Wilke said. “I want to be the one calling out and being involved. I like the leadership — I know it can be nerve racking as a freshman, but I like to help out the team in that way.”

Liszeski got to oversee that growth over the past few years. Watching it has been special to the staff at Sequoyah.

“It has been awesome (watching her grow as a player),” Liszeski said. “This is exciting for us because this is the first player that we have had in this round of coaching at Sequoyah High School that has signed and moved on to play college soccer.”

Wilke expects the game to get faster moving to the next level, but the challenge is something that she looks forward to.

There were multiple reasons that Wilke felt comfortable with the Elizabethton-based school. One of those was the staff with the NAIA Appalachian Athletic Conference program.

“They’re very involved and supportive. I really liked how responsive they were,” Wilke said. “I think that is very necessary when you go to play a sport in college. I liked that they are able to be there for me for support and to be available to talk to me whenever I need.”

Another was the relationship of the team. Similar to the bonds at the high school level, the way that Wilke observed how the squad worked stood out to her.

“I think Milligan soccer is very strong — very team-oriented. I like the closeness of the team and how supportive they are,” Wilke said.

Wilke will major in biology and what Milligan had to offer in that field was promising to her. She saw the beauty of the campus and the programs enough to get her to commit.

“(The campus) is very beautiful. I really liked the church and everything — it is very nice and gorgeous there. They have a nice lab — they have a very nice biology program and the soccer field is real nice. All of it is gorgeous up there,” Wilke said. “The coaches and the environment there were very comforting — especially for my major. I think it is somewhere that is really going to help me grow.”