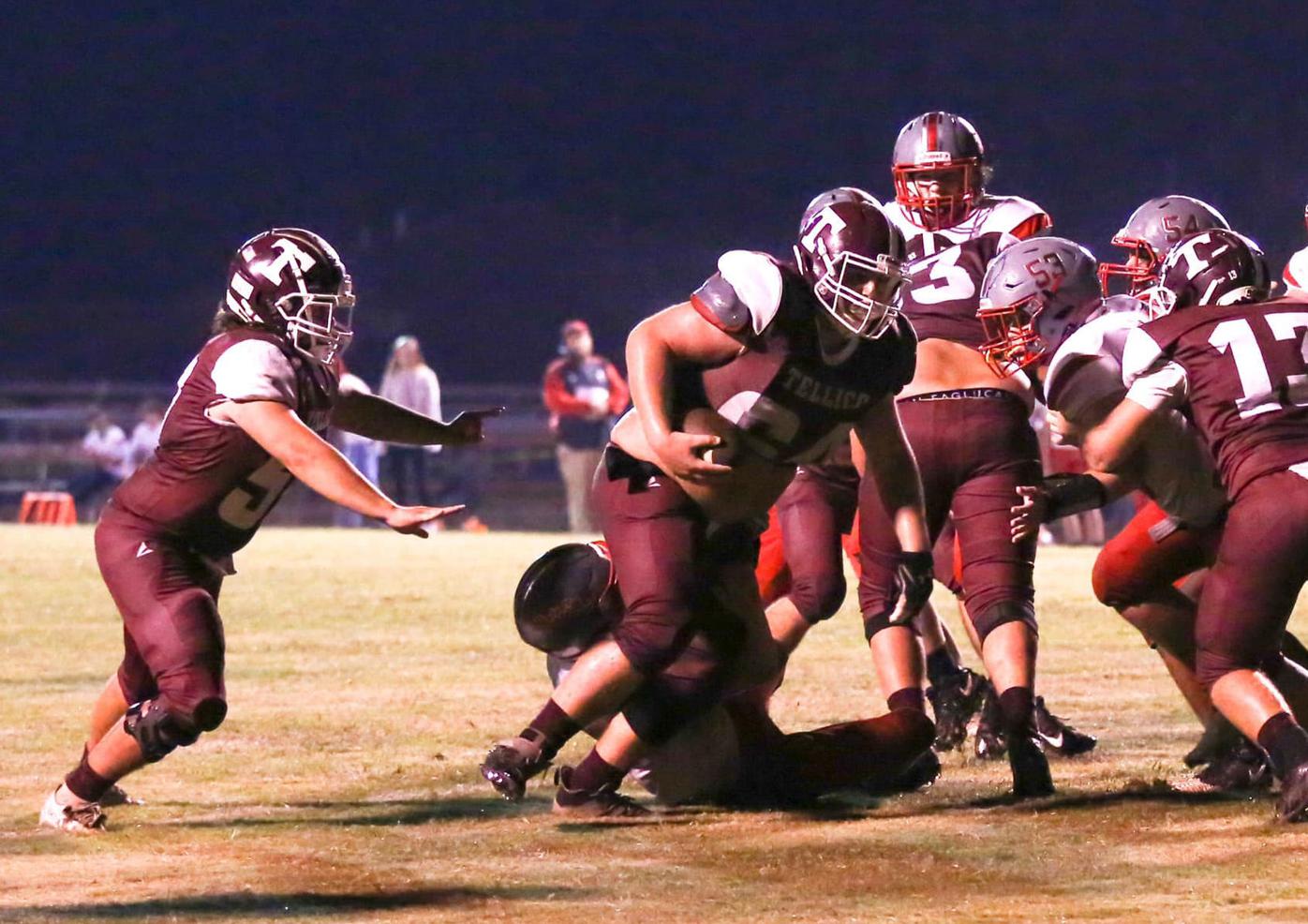 Tellico Plains’ Landen Phillips (center) runs in a score during the Bears’ 46-8 win over Copper Basin on Sept. 24 in Tellico Plains. 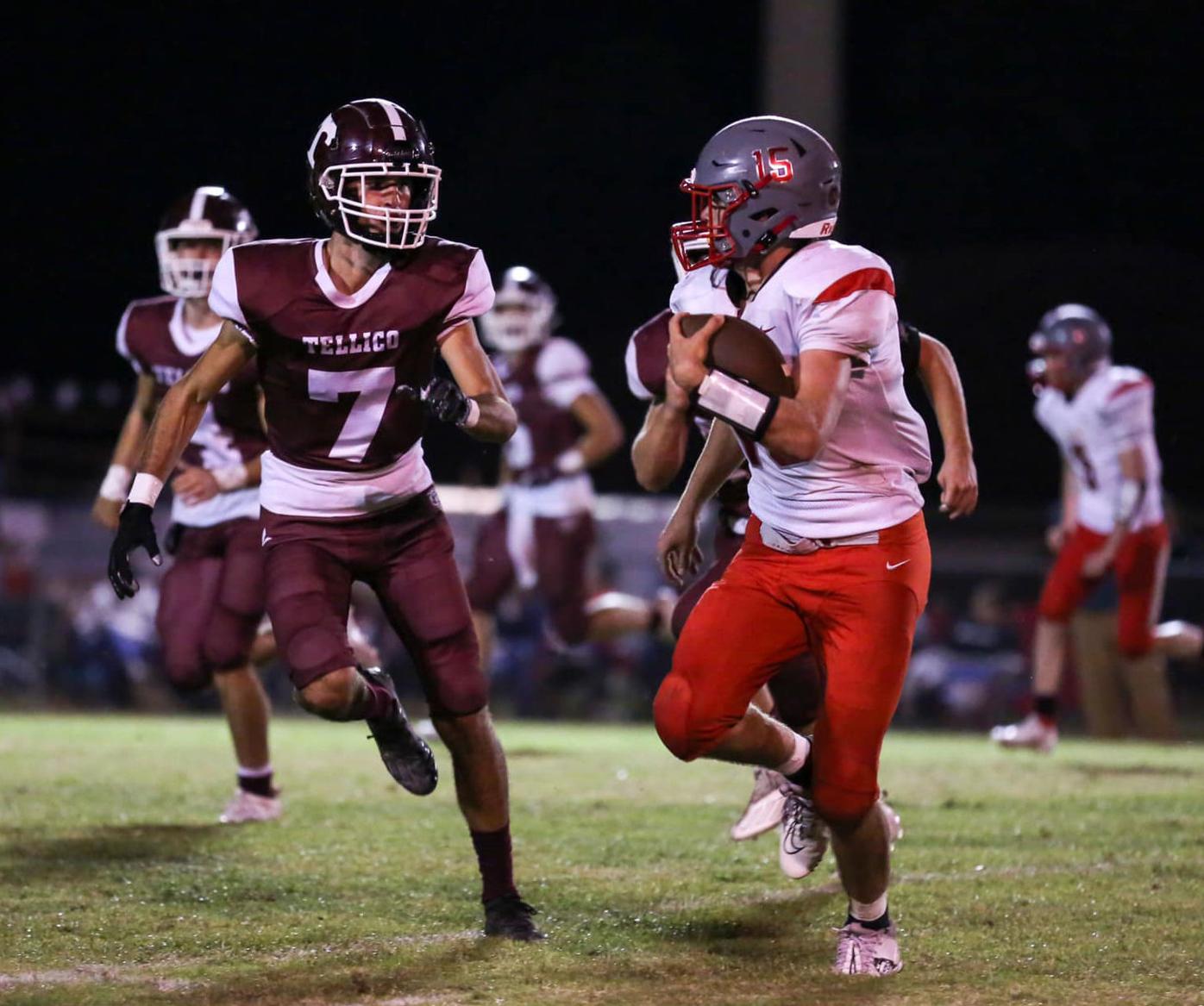 Tellico Plains’ Burgess Tate (7) looks to make a play during the Bears’ 46-8 win over Copper Basin on Sept. 24 in Tellico Plains. 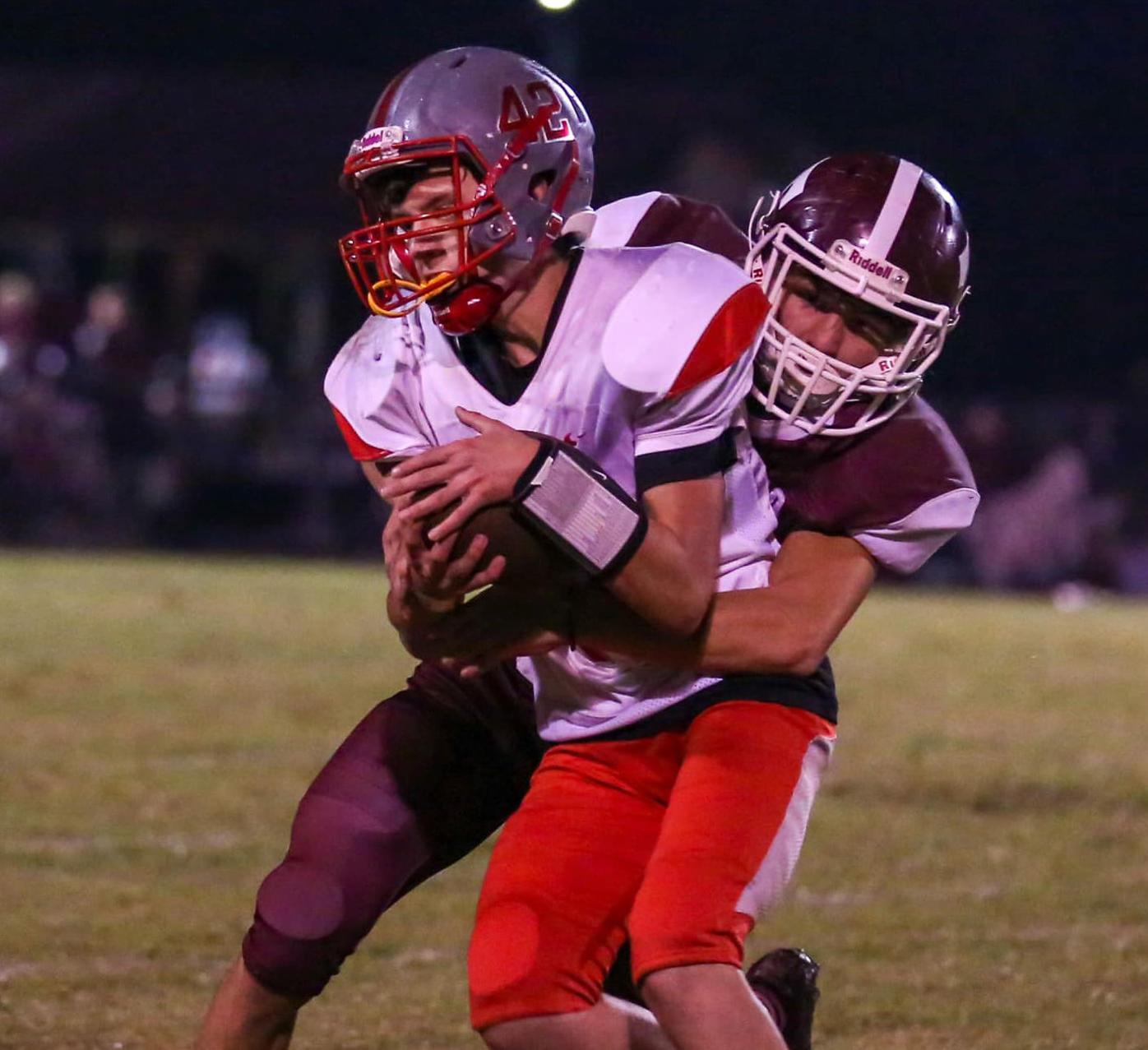 Tellico Plains' Haiden Thomas looks to make a tackle during the Bears' 46-8 win over Copper Basin on Sept. 24 in Tellico Plains.

Tellico Plains’ Landen Phillips (center) runs in a score during the Bears’ 46-8 win over Copper Basin on Sept. 24 in Tellico Plains.

Tellico Plains’ Burgess Tate (7) looks to make a play during the Bears’ 46-8 win over Copper Basin on Sept. 24 in Tellico Plains.

Tellico Plains' Haiden Thomas looks to make a tackle during the Bears' 46-8 win over Copper Basin on Sept. 24 in Tellico Plains.

Landen Phillips’ touchdown capped off a fun night for the Bears in Tellico Plains against Copper Basin. The senior lineman’s score culminated a fireworks show as the Bears’ 46-8 win got them back onto winning ways.

Coming off of a pair of losses — a nailbiter at Midway and a blowout against Meigs County — Tellico Plains’ (3-2) performance was the perfect turnaround ahead of a crucial chunk of their region schedule.

“We finally played a solid football game without turnovers and penalties. We played a complete game — to our potential,” Rechtorovic said. “We have just kept grinding and staying on them about getting better and improving each day. It was the little things that we had to keep working on to be a complete ball club.”

The night’s centerpiece moment was Phillips’ score. As a 6-foot-3, 300 pound center he does not run the ball much. But from seven yards out early into the fourth quarter the senior made a memory he can tell for some time.

“The offensive linemen go through most of their high school career without any form of acknowledgement. Throughout the course of the year I try to get the seniors … let them live the dream and hand them the football off,” Rechtorovic said. “Something fun and something that all the kids on the team really like. When he scored, all the kids on the team … There were kids jumping up and down. It was crazy. Something good for the kids, it’s someone who does not get recognized for all the hard work he puts in. I try to let the o-linemen live the dream … they all think they can run the ball anyway.”

Phillips has had a big role to step into his senior season — replacing Chase “Diesel” Hunt in the middle of the offensive line. The senior’s size is not the determining factor of what he means to Rechtorovic’s team though.

Michael Thomas could be a couple weeks away from Saints return: report

College football on TV: This week's lineup and your best bets

But Phillips was not the only star of the game. The Bears’ starting line — weighing in well over half a ton — executed and bought enough time for six passing touchdowns and over 250 yards for the Tellico Plains offense.

“They did a good job protecting in the passing game and giving time to throw the football. (They) opened up some holes to run the ball. We’ve been working on the little details to be the complete ballclub that we envisioned ourselves being,” Rechtorovic said. “Coach Bobby (Hinton) does an excellent job with the offensive line. They just keep working, grinding and trying to get better.”

“(Last night) was a very solid performance. Everyone played well, everybody got involved in the passing game. All our receivers caught a pass. We’ve been trying to open up things to get everyone involved,” Rechtorovic said. “Ethan and Major are a big part of what we do, but we have other folks who we need to step up and contribute. They did a good job last night getting on the stat board.”

Senior Ethan Thomas and junior Damian Webb got involved in the receptions as well, along with sophomore Burgess Tate. Senior Mikiah Jenkins hauled in a pair of two-point conversion receptions.

Defensively, the Bears held Copper Basin (1-3) to one score — the lowest since their 20-0 shutout against Sequoyah in Week 1. A one score game was a strong response against a Cougars team that scored 56 points on the Bears a year ago.

“We just have hard nosed kids who enjoy playing defense,” Rechtorovic said. “For the most part, they do their job to the best of their abilities and that is all that I can ask them. They play hard on defense … they’re blue collar work ethic kind of folk.”

Tellico Plains heads into an important part of their season — three Region 3-2A games in 21 days. The Bears will travel to Marion County for a 7 p.m. kickoff against Marion County (4-0) before hosting Polk County (2-2) on Oct. 8 and traveling to Bledsoe County (2-2) a week later.