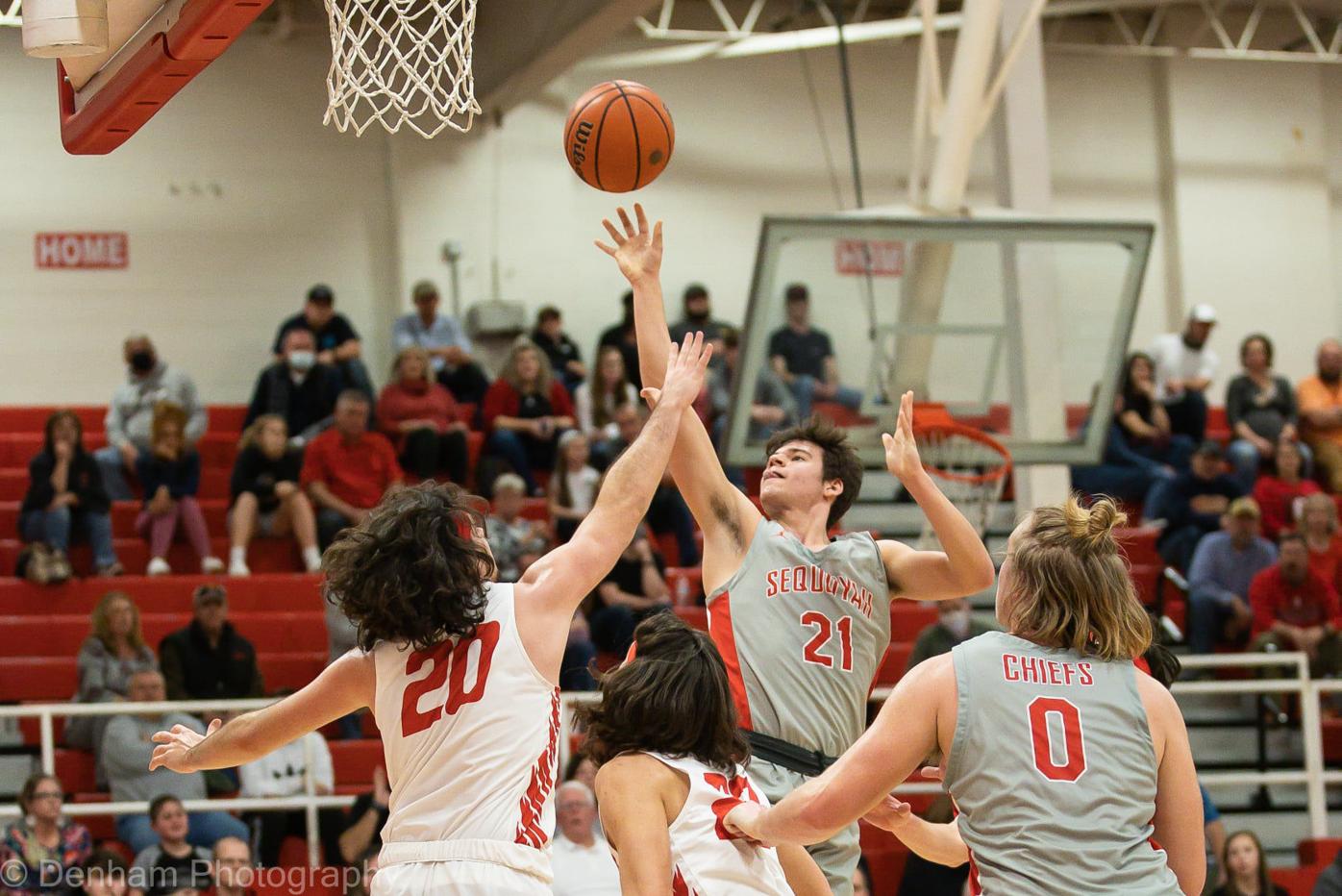 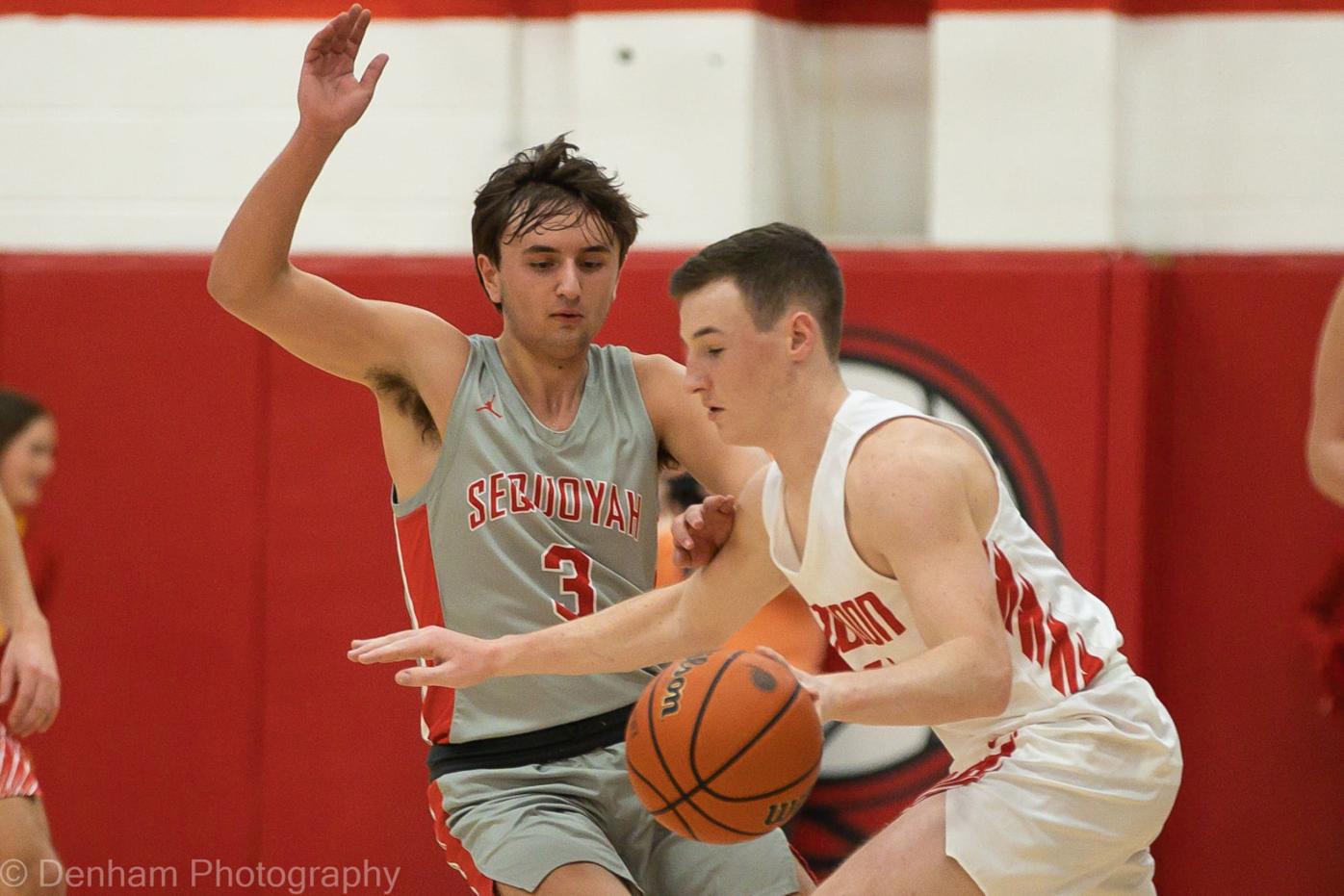 Cooper Strickland (back) defends against Loudon's Keaton Harig in Sequoyah's 53-50 loss in the District 5-AA Championship game on Feb. 23 in Loudon. 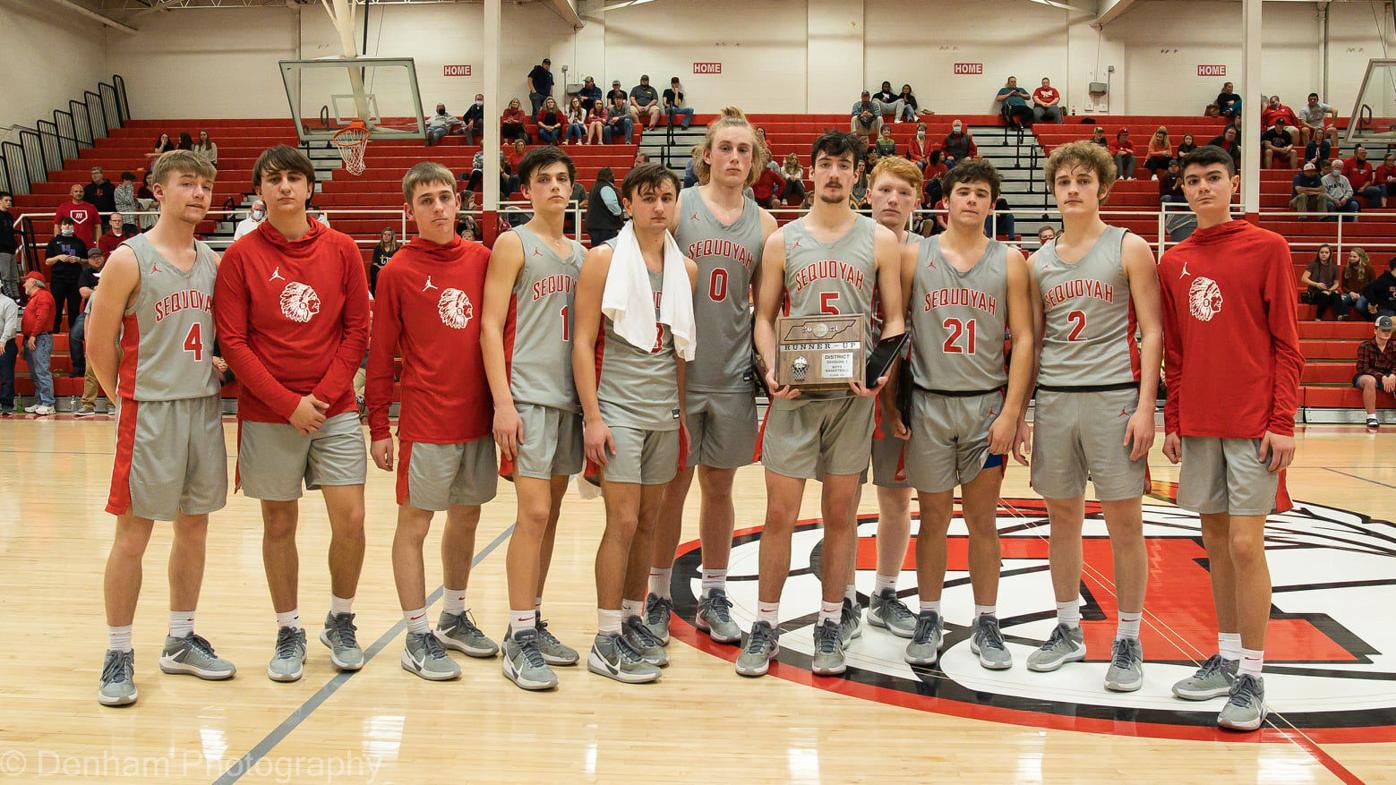 Cooper Strickland (back) defends against Loudon's Keaton Harig in Sequoyah's 53-50 loss in the District 5-AA Championship game on Feb. 23 in Loudon.

LOUDON — Caleb Sloan’s 3-pointer rolled around the rim nearly twice before tilting inside the net as time expired. The only problem; Sequoyah needed a six-point basket — leaving them short of their first district crown in 10 years.

Sequoyah trailed 23-16 late in the second quarter before kicking into overdrive. The Chiefs closed out the first half on an 8-0 run to stretch in front of Loudon 24-23 at the break. While Jackson Kuberka, and surprise threat off the bench Asher Dalton, got to the rim — four points each — what helped the guests was how they stepped up off the ball.

To force themselves back into the championship, the Chiefs had to slow Loudon’s scoring — mainly Jackson Williams, who had 13 points at the point. That worked to close out the quarter, but did not last long.

Loudon stormed to a 7-2 run to start the second half and a 16-7 third quarter that dug the Chiefs back down to the hole they were in the second quarter.

“I don’t know if it was the limelight of the game or what. We came here earlier in the season, and it was a big game — we played really well,” Sequoyah Coach Andy Pennington said. “Thank goodness Asher Dalton came off the bench, I thought he played really good for us. I thought when he came in the game there was a glaring difference in how hard he was playing compared to the rest of the other guys. I don’t know if it was nerves or what — it was very out of character for us. That is going to get your butt beat.”

Kuberka had two points in the third quarter — and four in the fourth - leading him to a team high 13 points. Sloan followed with 12 points while Dalton and Dillon Stakely had 10 points each.

While the Chiefs did get a lid on Loudon’s Williams in the second half, Donovan Blankenship burst open.

Blankenship had 13 points in the second half — add his two free throws in the first quarter for a game high 15 points. He also created problems for Sequoyah on the boards, grabbing 14 rebounds — four less than Sequoyah’s team total.

“It is frustraiting, because I thought we stood on both ends and ball watched a lot — I don’t know if they were resting or what. Going back to Asher, it was a glaring difference in how hard he was playing compared to everybody else. We go in close and got the lead back. Asher was doing more than just his four points. The kid was playing hard and he was rebounding,” Pennington said. “We just came out in the second half, and man, the first three minutes of the second half we have been preaching all year is huge. It just was not our night. It wasn’t God’s plan and I am at peace with it. That’s what I tried to tell them — we had a great season, keep your heads up.”

However, Sequoyah showed their capabilities and why they were able to beat Loudon in Loudon in late January.

In the middle of the fourth quarter, Stakely knocked down a deep 3-pointer in a possession that was proceeded by a layup to cut Loudon’s lead to three. Stakely then grabbed a rebound and got the ball up to Kuberka, who turned the sequence into a 7-0 run and a 1-point deficit. Stakely led the Chiefs with seven rebounds.

Then Blankenship found his footing. He added a basket — Loudon’s first from the floor in the fourth quarter — at the 2:50 mark followed by two more points from Broady Harrison — who finished with 13 — to kill Sequoyah’s momentum.

All the hosts had to do at that point was knock down their free throws to seal the evening up.

Kuberka, Stakely and Dalton were named to the All-Tournament team.

As runners-up in District 5-AA, the Chiefs will host District 6-AA’s Red Bank in the Region 3-AA Quarterfinals.

“Red Bank has a couple of pieces they did not have (when Sequoyah played them). I watched them last night, and I think we match up better with them than Brainerd. It is at home. I tried to tell the kids (in the locker room) don’t let this one game ruin this great season we have had. We have not had a winning season in eight years — this bunch has had a great season. We got rewarded with a region game at home against a team that we already beat and, honestly, I think we match up well with. Why not go win that and get a region semifinal game and a chance to go to substate,” Pennington said.

“We went on the road and beat them — that doesn’t happen. I don’t care if it is in November or when it was — it is in their heads that they got their butts beat. They come to our place, and I think we match up with them — we will see what happens.”