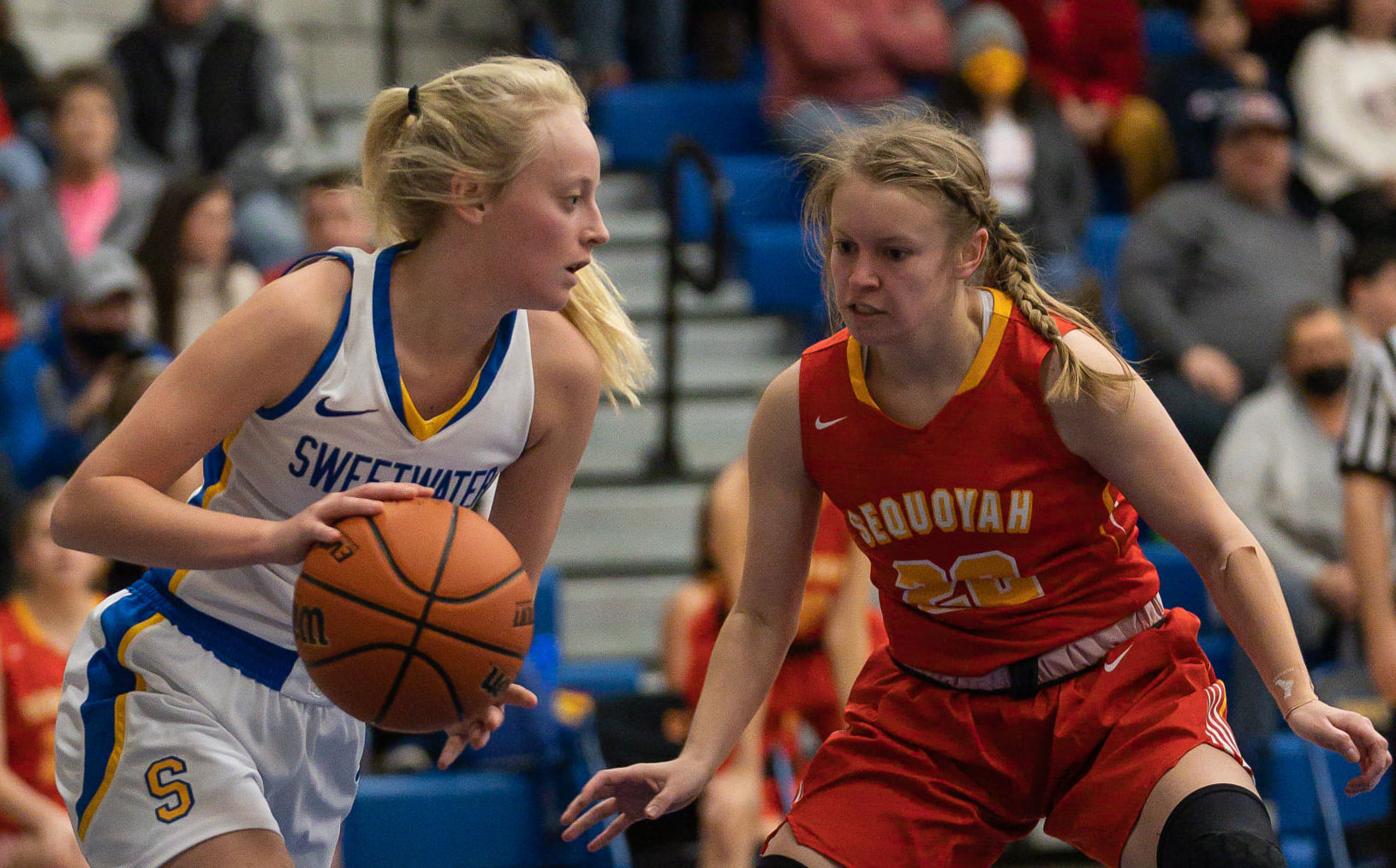 Abbey Barr (left) moves the ball for Sweetwater against Sequoyah’s Hanna Carroll in the Lady Cats’ 35-33 loss in the District 5-AA First Round on Feb. 16 in Sweetwater. 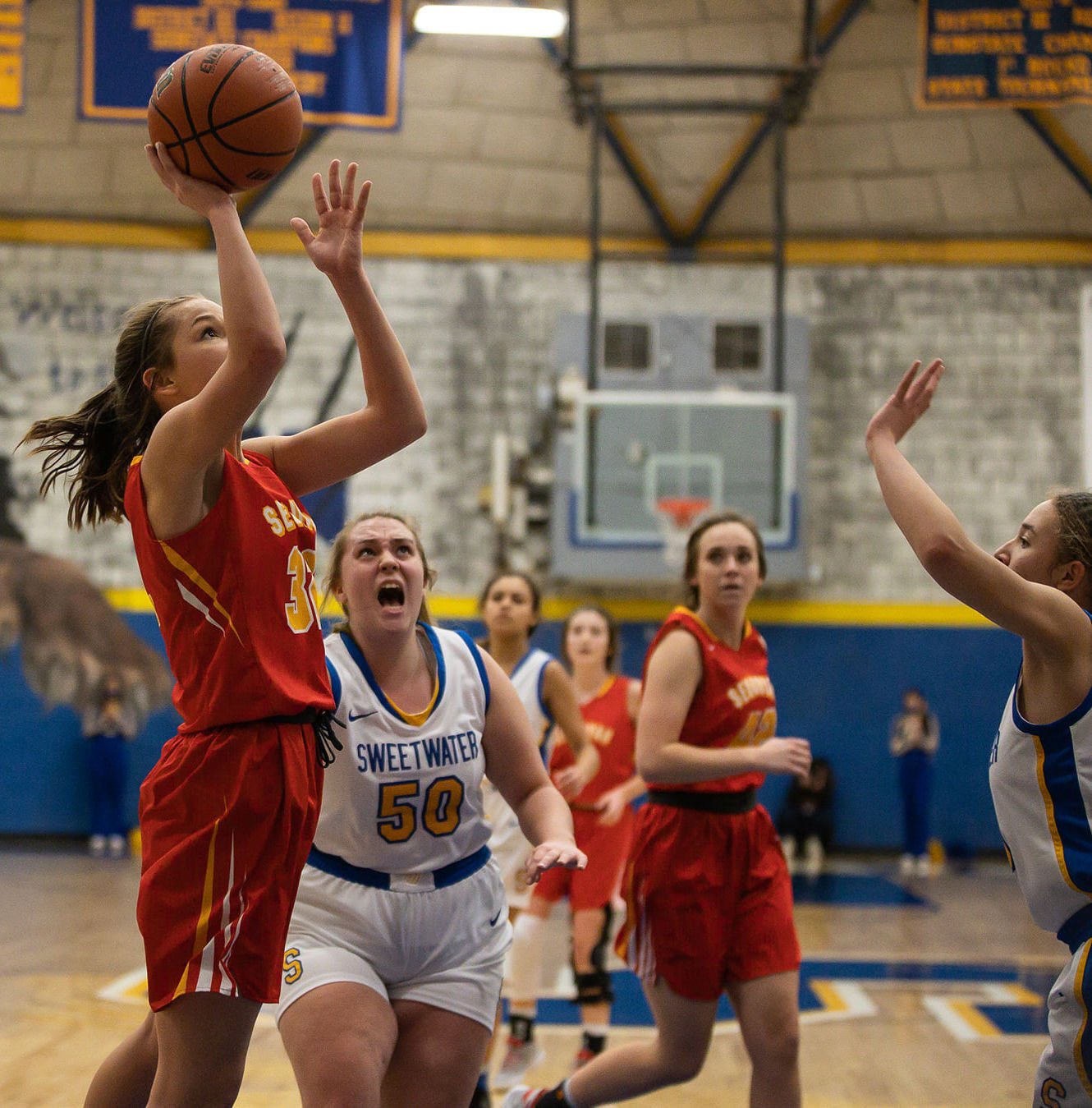 Brooklyn James goes to the basket for Sequoyah in the Lady Chiefs’ 35-33 win over Sweetwater in the District 5-AA First Round on Feb. 16 in Sweetwater. 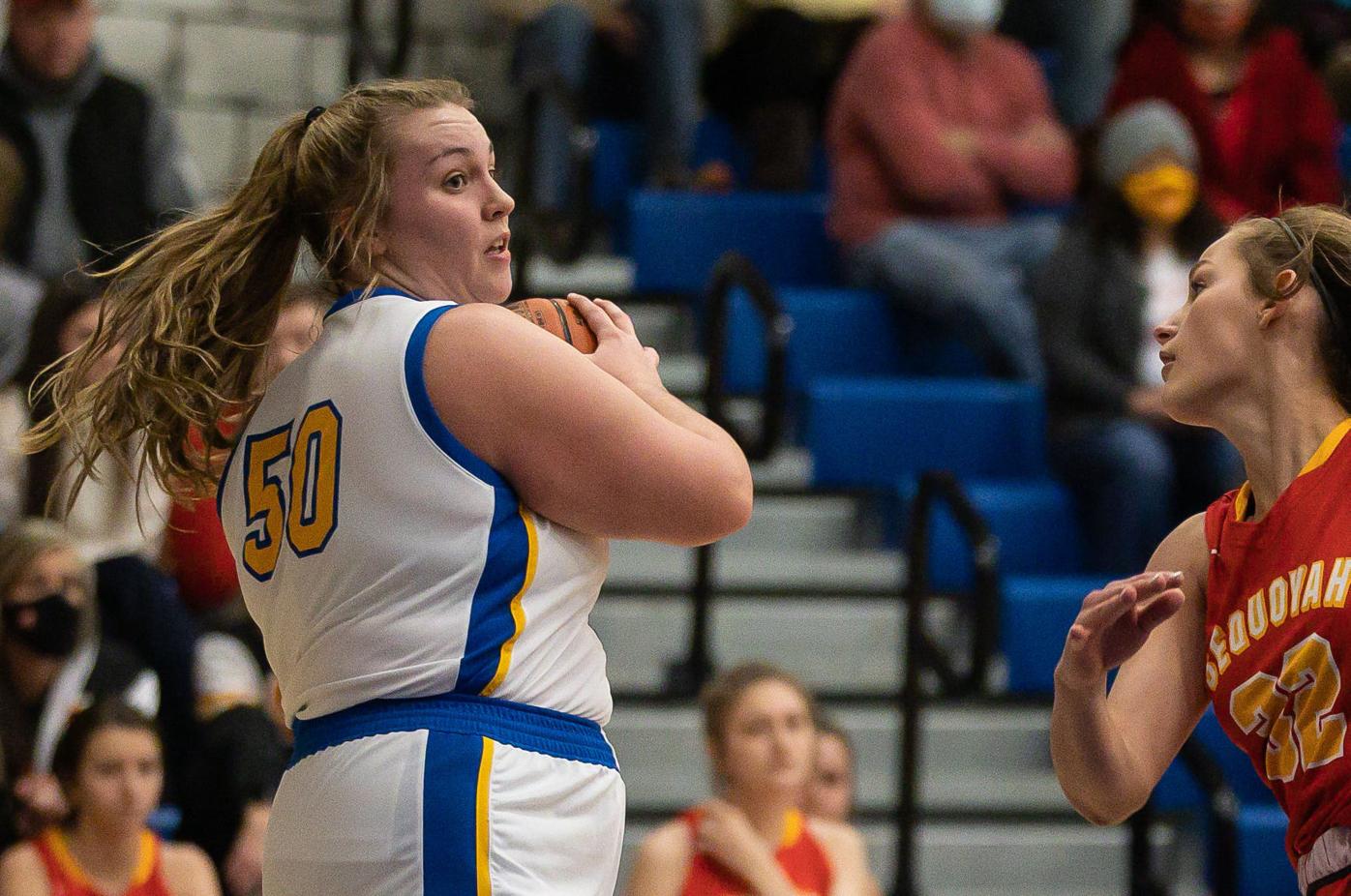 Emily Allen (left) looks for a pass for Sweetwater in the Lady Cats’ 35-33 loss to Sequoyah in the District 5-AA First Round on Feb. 16 in Sweetwater. 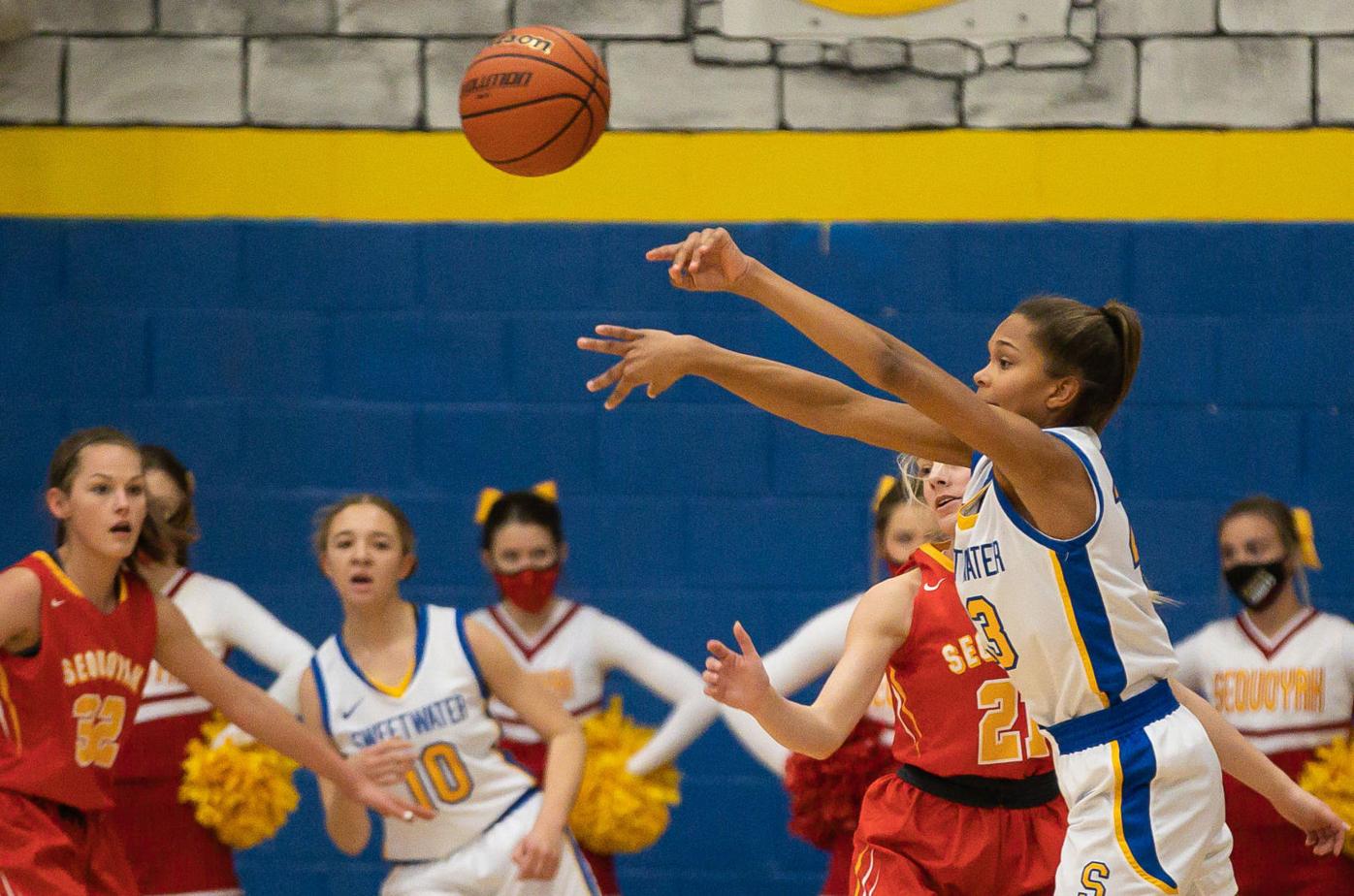 Keke Norfolk (right) passes the ball for Sweetwater in the Lady Cats’ 35-33 loss to Sequoyah in the District 5-AA First Round on Feb. 16 in Sweetwater.

Abbey Barr (left) moves the ball for Sweetwater against Sequoyah’s Hanna Carroll in the Lady Cats’ 35-33 loss in the District 5-AA First Round on Feb. 16 in Sweetwater.

Brooklyn James goes to the basket for Sequoyah in the Lady Chiefs’ 35-33 win over Sweetwater in the District 5-AA First Round on Feb. 16 in Sweetwater.

Emily Allen (left) looks for a pass for Sweetwater in the Lady Cats’ 35-33 loss to Sequoyah in the District 5-AA First Round on Feb. 16 in Sweetwater.

Keke Norfolk (right) passes the ball for Sweetwater in the Lady Cats’ 35-33 loss to Sequoyah in the District 5-AA First Round on Feb. 16 in Sweetwater.

Standing near the key, the senior glanced up to the clock and saw eight seconds flash — she knew she had to make a play.

James took the ball to the basket, banking in the go ahead shot off the glass and in. With that basket, Sequoyah beat Sweetwater 35-33 in the opening round of the District 5-AA tournament.

“There were a lot of emotions running through that because she believed in me, and my team was behind me to lift me up,” James said. “We knew that where the time was going that we needed to get a shot up and we needed those two points. If we had a tied game we had to get into certain defenses. The emotions running through that — it was a lot of pressure. I wanted the ball and (Hanna) got it to me, and she said she knew I would hit it.”

After a long debate on how much time needed to be put on the clock, Sweetwater had 8.4 seconds to respond — they lost three of those trying to get up the court.

Sequoyah set into a specially designed defense that had the intent of cutting off all space to Abbey Barr and Trinity Upton. Barr couldn’t find any room and the ball made its way to Gracie Hart. The Lady Cats were unable to get a shot off.

“It was actually a play that we have been practicing — we just did not execute it,” Sweetwater Coach Heather Jaramillo said. “It would have been a shot for Abbey (Barr), but we did not get there. We did not go through it. We did not get to where we needed to be, and that is what happens — it is what it is.”

The Lady Chiefs did a strong job on the defensive side — holding Sweetwater to the lowest score of the season between the two teams. They also held the duo of Barr and Upton to a combined 15 points.

“We knew we had to stop Barr and Upton,” Sequoyah Coach Allyson Bowers said. “Those two are what make their offense flow. One thing we did well in the first game with them was changing defenses constantly. We kind of got away from that when we played them a week ago. That was one of things to come back into this. We added a defense where we are denying Upton and Barr the ball. Defense wins ball games, and I think that is probably one of the best defensive stands I think I have seen my team play.”

Sequoyah only had three leads during the game. They started early up 4-2 then quickly fell behind 11-6. The Lady Chiefs did not go ahead again until late in the third quarter. A large part of that was Sweetwater isolating Abbey Borden offensively.

The senior averages 10 points per game, but was held to a lone free throw on the night. However, like the all-district player she is, Borden found other ways to get more involved in the game. She led the game in rebounding with seven.

“I think she stepped up majorly defensively,” Bowers said. “That was a challenge I had to her in the beginning of tonight’s game — I told her you have to let your defense create offense. I could not have asked for a better job when Brooklyn got in foul trouble. (Borden) was my only big that I had to put on the boards and she took over at those times. She responded each time she hit the floor.”

With Borden unable to get to the basket the Lady Chiefs had to find points elsewhere. Carroll knocked down a 3-pointer to start the second half, but James led the line.

James had the baskets that gave Sequoyah each of their leads and also six points in the fourth quarter.

“Her continual attitude to attack the glass,” Bowers said. “In the beginning — I do not think she was very confident in if she could finish those shots. Her teammates and my staff had continued to push her, and to build that confidence. I think that helps Abbey in the long run, and they compliment each other very well.”

Sweetwater had a tough time scoring in the fourth quarter. Emily Allen had an early basket, but the guests sparked an 8-0 run with points from James and Lynsey Gunter.

“We just did not finish like we should have,” Jaramillo said. “We did not take care of the basketball, and we did not execute the little things. That is what happens when we do not execute the things we talk about like we are supposed to do.”

The third quarter was even tougher on Sweetwater’s offense. Alaysia Macon knocked down the first basket of the second half with nearly four minutes already played. The Lady Cats, despite losing at the glass, managed to keep Sequoyah in tough angles that only allowed five points for the Lady Chiefs in the third quarter.

Barr was held to nine points — five points below her season average — and finished with five rebounds.

Allen, another Sweetwater senior, led the Lady Cats with 12 points — a season high, benefiting from the focus on Barr and Upton.

Sweetwater has three seniors on the roster: Barr, Allen and Reagan Moree.

“(The seniors) are going to be hard to replace,” Jaramillo said. “There is not really anyone on our team right now that can fill their position 100%, and (the underclassmen) have big shoes to fill. That says something about them as players and what they mean to this program. We are going to miss them. They are assets to us, and I wish them the best of luck in all that they do.”

The defeat marks the first time since Jaramillo took over in Sweetwater that the Lady Cats will not reach the region tournament.

With the night points Barr scored against Sequoyah, she surpassed 1,000 career points in her final appearance for Sweetwater. The senior averaged 15 ppg in the 2020-21 season — featuring a high of 31 against Loudon. Barr also scored 29 points against the Knoxville Ambassadors, 22 against the First Baptist Academy and 20 against East Hamilton and Loudon in their second meeting.

Barr will be recognized with an official 1,000-point ball in the Sweetwater High School banquet in April.