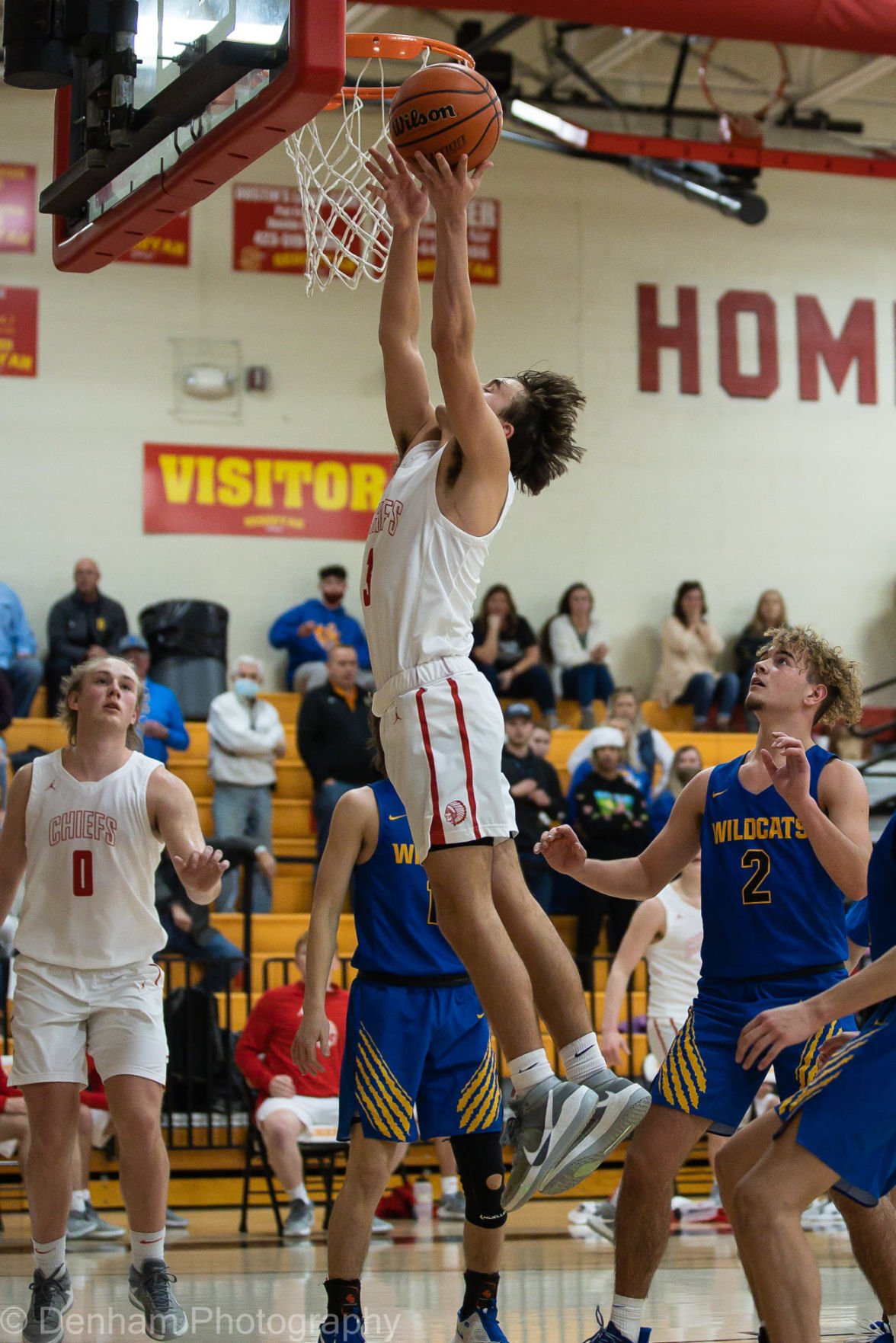 Cooper Strickland rolls the ball into the basket for Sequoyah in the Chiefs’ 58-57 win over Sweetwater in the District 5-AA semifinals on Feb. 19 in Madisonville. 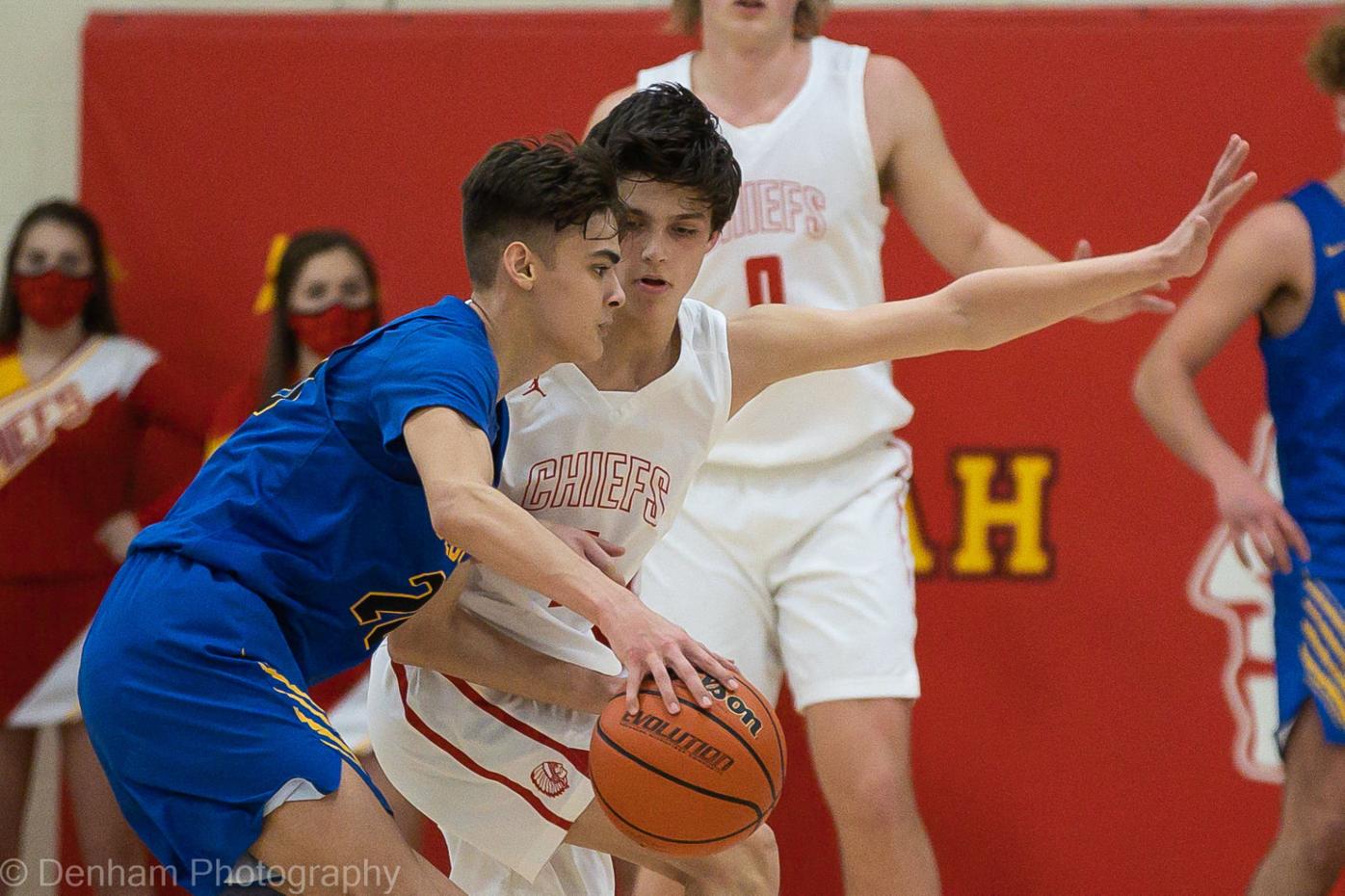 Sweetwater’s Jayce Upton (left) dribbles past Caleb Sloan in the Wildcats’ 58-57 loss in the District 5-AA semifinals on Feb. 19 in Madisonville. 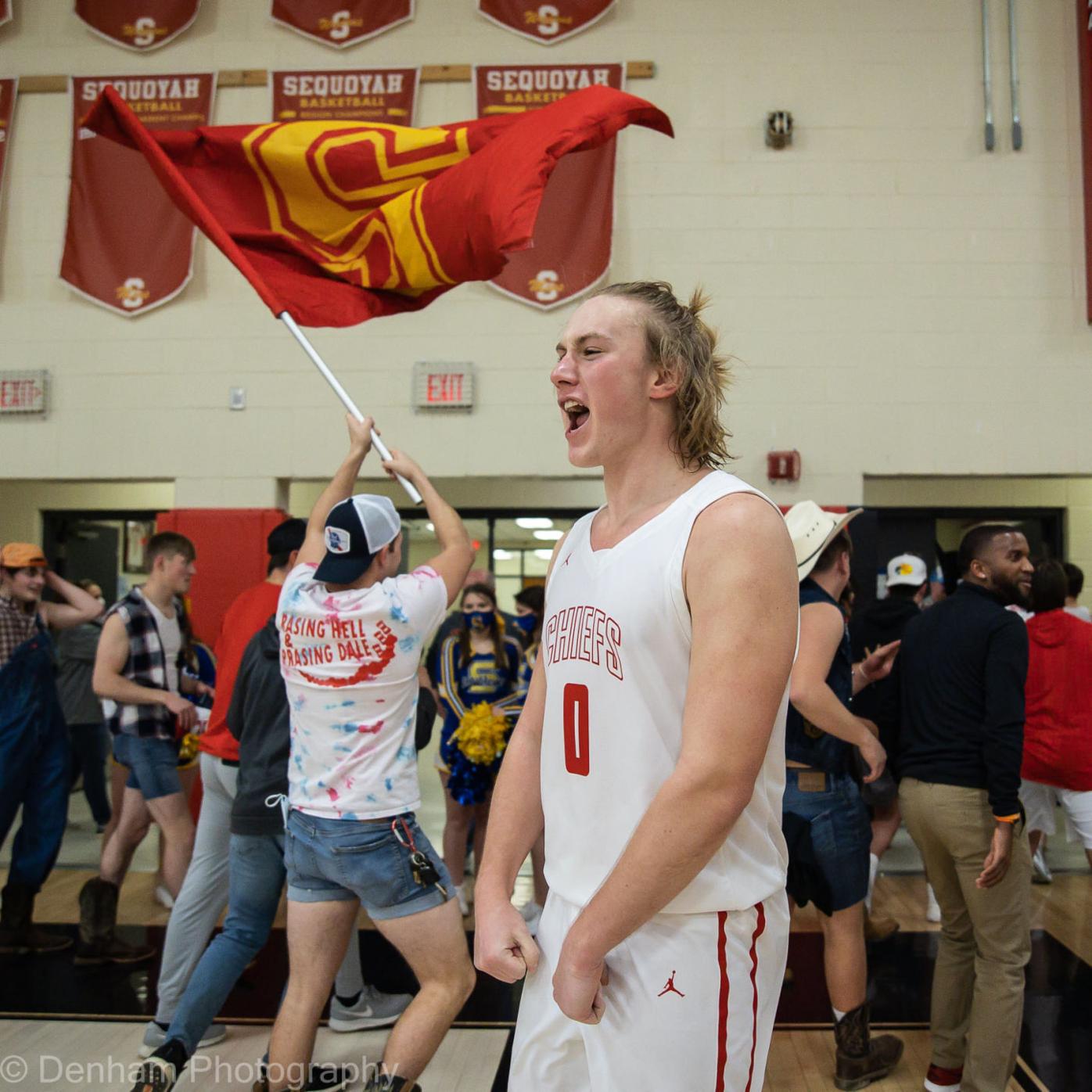 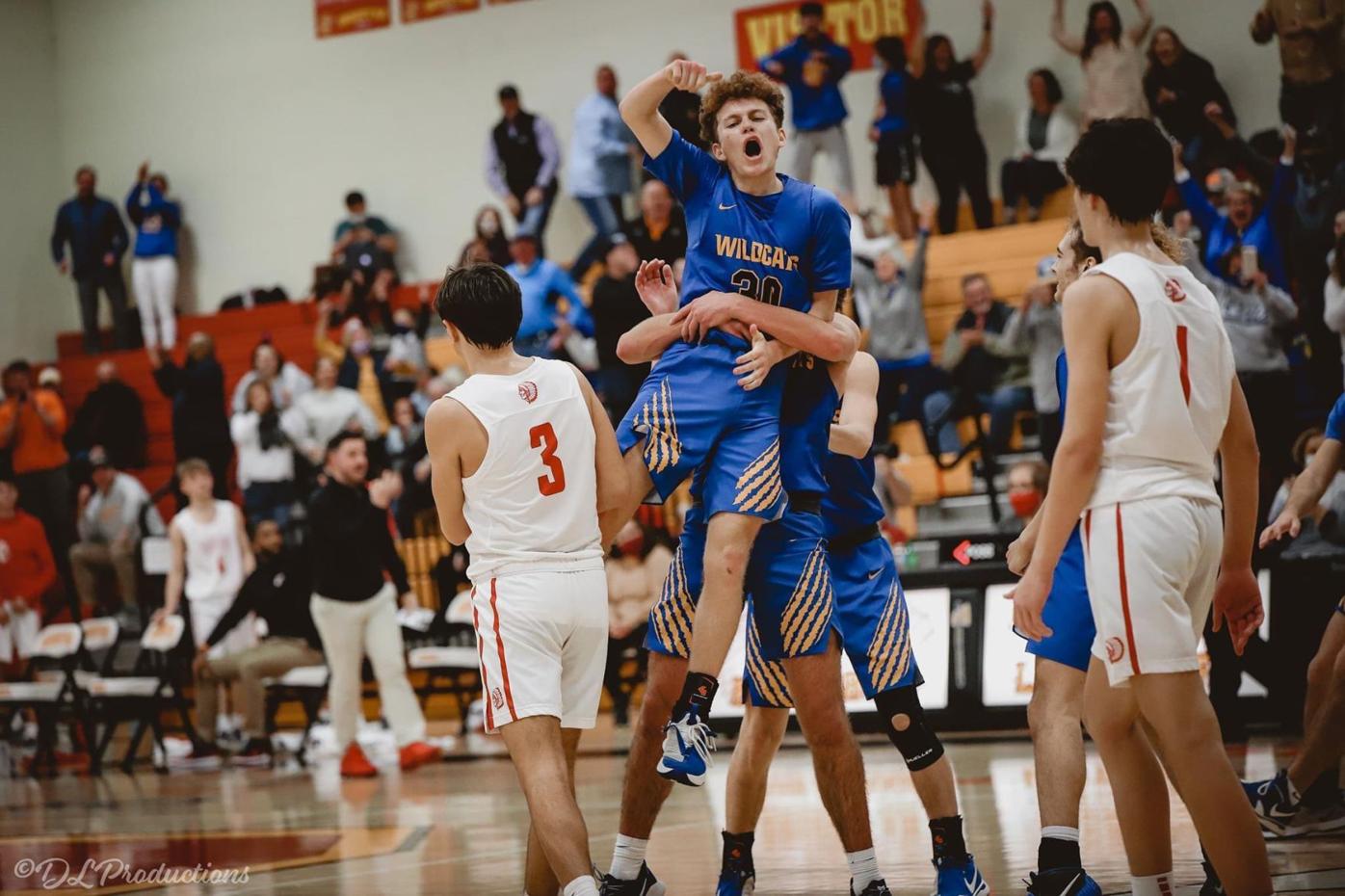 Kade Correll celebrates with his team after making a 3-pointer that sent the Sequoyah and Sweetwater District 5-AA semifinal game into overtime.

Cooper Strickland rolls the ball into the basket for Sequoyah in the Chiefs’ 58-57 win over Sweetwater in the District 5-AA semifinals on Feb. 19 in Madisonville.

Sweetwater’s Jayce Upton (left) dribbles past Caleb Sloan in the Wildcats’ 58-57 loss in the District 5-AA semifinals on Feb. 19 in Madisonville.

Kade Correll celebrates with his team after making a 3-pointer that sent the Sequoyah and Sweetwater District 5-AA semifinal game into overtime.

MADISONVILLE — Cooper Strickland drove to the basket with just over 10 seconds on the clock.

Down three, his layup bridged the gap, but Sequoyah still trailed and now, Sweetwater had the ball.

On the day after his birthday, Strickland stole the ball at half court and broke away for a layup — wrapping up a 58-57 home win for Sequoyah in the District 5-AA semifinals on Feb. 19.

Down the stretch, Strickland stepped up and made a play, lifting the Chiefs up in a hotly contested, double overtime matchup — clinching a home game in the Region 3-AA quarterfinals and snapping a four game losing streak.

“(I needed) to do whatever my team needed me to do. Score if they needed me to score and pass it if they needed,” Strickland said. “It was very important. We had an eight game winning streak going and then the switch flipped, and we started losing. It is good to come in here and get another win — hopefully we can keep it going into the region tournament.”

The Chiefs will travel to Loudon in the District 5-AA Championship on Tuesday while Sweetwater will host McMinn Central in the consolation game.

For the hosts, the win is a crucial spike in the long road that Coach Andy Pennington’s team has been on. The Chiefs, who had eight straight losing seasons, are playing for a championship.

“We waver some, and I know people get sick of hearing it, but our culture and the way we handle things is finally paying off. These guys are learning how to handle some adversity, and their character is showing when things go bad. I don’t know if we are the most talented team around, but I think our culture is different,” Pennington said. “It has been a long three years, but they are reaching the benefit of it and showing some poise.”

The Chiefs rocketed out to a 9-0 lead before Sweetwater brought the game back within a point. Jackson Kuberka and Dillon Stakely had 20 points each.

“It is a blessing. This is God’s plan, and I have prayed about it,” Pennington said. “Either way I was at peace with what happened tonight. I hate that somebody had to lose. I know those kids over there are crushed. My guys are going to celebrate all night. They deserve it. We will play for a district championship. We will hang a banner in this school, and I would love to cut some nets. This community deserves it. These kids deserve it, and their parents deserve it.

“Tuesday night is going to be big. I told them to enjoy tonight, but let’s lock in tomorrow.”

Saluki Football | 3 burning questions for No. 1 NDSU and SIU

Strickland, who did not score from the floor until his final two plays, finished the night with six points.

Caleb Sloan hit a 3-pointer in the second quarter and led the Chiefs with eight rebounds. Preston Abdulla followed with six rebounds.

For Sweetwater, the loss ends the chance of a three-peat as district champions. The Wildcats led on three occasions — once in the fourth quarter off of a pair of free throws from Gabe Leeeper and twice in the second overtime. Austin Long put the Wildcats ahead with two free throws, as well as Dalen Gibby dropping in a basket.

“I am very proud of my kids — they played their absolute butts off,” Sweetwater Coach Jeremy Henderson said. “Two great teams, but, for the first time, I found myself as a coach not knowing what to tell my kids in the locker room after that. Anybody that watched that game … I had multiple Sequoyah people come up and shake their heads. We got hosed. That is the most disappointing thing that that was done to a group of kids who played that hard, and fought to come back that hard. I don’t know what to tell you. I told my team, ‘guys get your heads up. I am proud of you. I have no answers for you, I have no words for you.’”

Jayce Upton led the Wildcats with 16 points, followed by 12 from Austin Long.

“I want to make it clear — I am not taking a single thing away from Sequoyah,” Henderson said. “They have a great group of kids, and they are very well coached. They are good kids and they play the game the right way. Great job by Pennington and those guys — I have nothing but respect for those guys.”

In the fourth quarter, Long knocked down his first free throw, bringing the lead to two, but missed his second free throw.

“It is tough. We had that, and we deserved that. Of course, we had to make those free throws there. I am just really, really disappointed. When you have fans from the other team telling you how bad that was at the end then you have a problem. I had 10 people, from Sequoyah, in the past five minutes tell me how bad that was,” Henderson said. “I always try to give everybody the favor of the doubt, but that was blatant — absolute blatant.”

In the final seconds, there was a dispute over the time on the clock as well as a couple plays.

“The biggest one is there were three of them in the corner trying to intentionally foul my guy, which is what they are supposed to do, and put us at the line. Instead, we just swallow the whistle, the ball gets ripped out and they just go shoot a layup. That is the first one,” Henderson said. “Then we hit the layup. We have 5.8 seconds, and I will be interested to see the film because honestly speaking I think there is more around eight seconds there when I am calling a timeout. We get the ball in bounds and come down. There was contact on the last play — the kid is fouling on the last play, and we just swallow the whistle.

“It is disappointing. I did not get to the door and I have coaches from other schools talking about how bad that was. It was blatant and obvious — I am just really, really disappointed for my kids.”