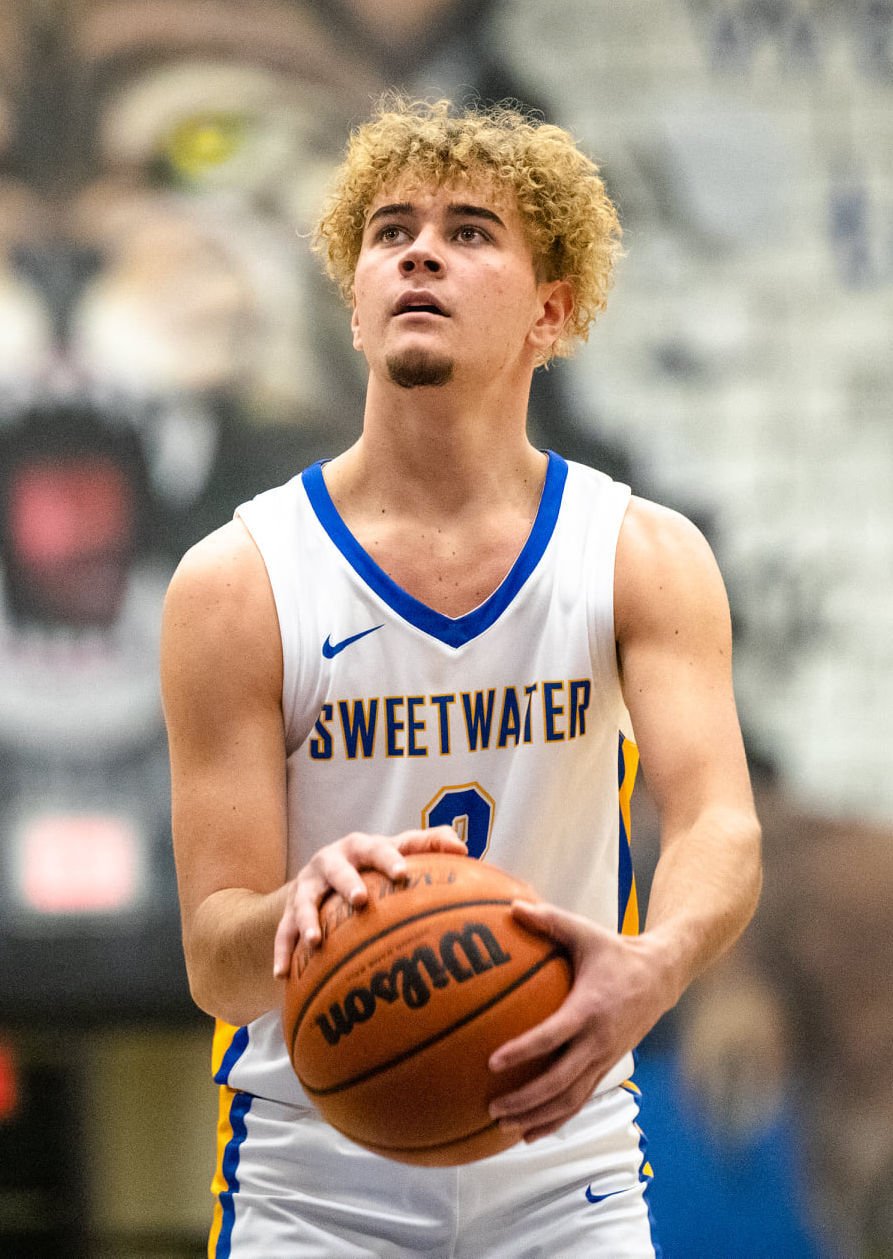 Austin Long takes a free throw for Sweetwater on Feb. 11 in Sweetwater. 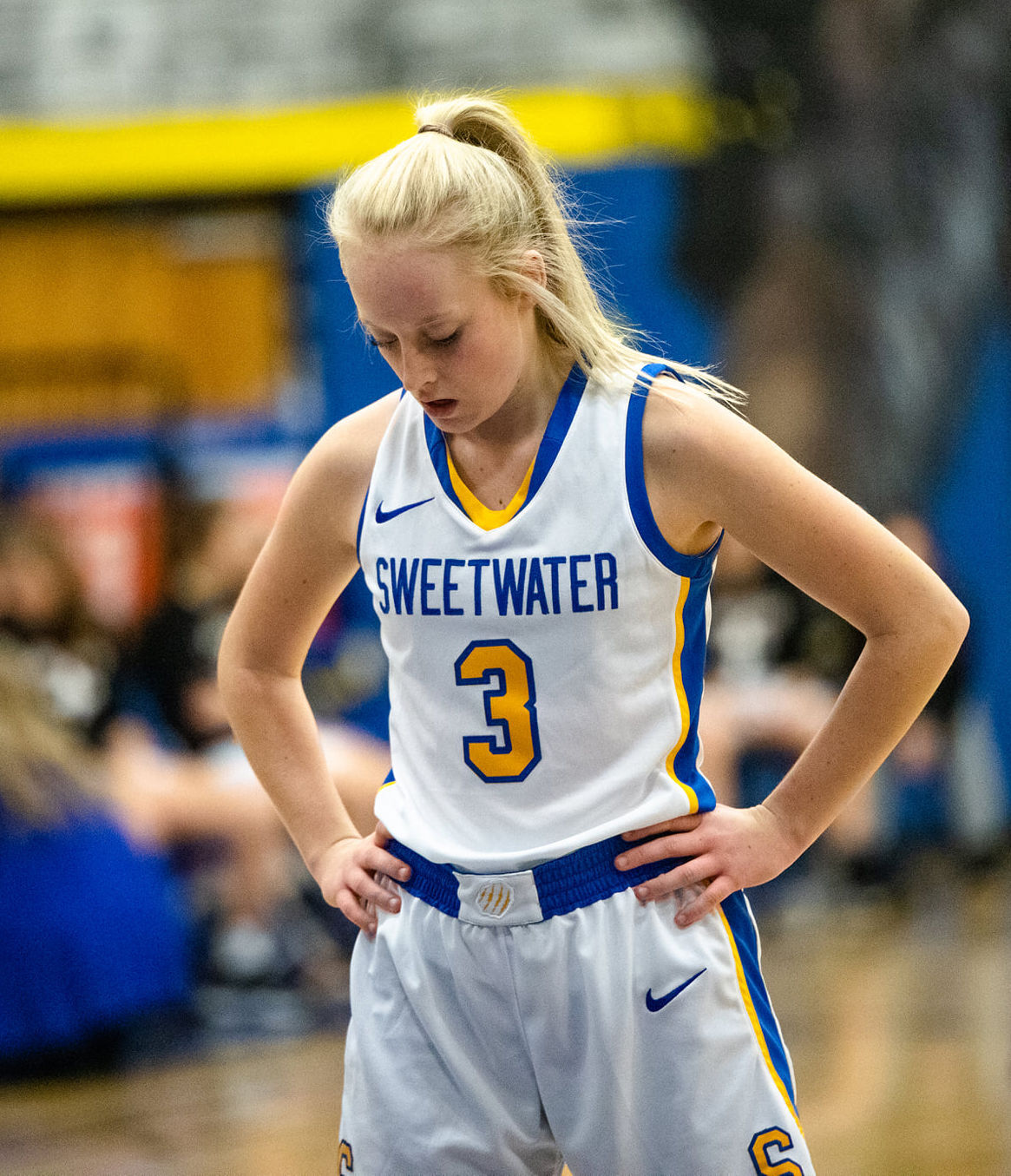 Abbey Barr gets ready to attempt a free throw for Sweetwater on Feb. 11 in Sweetwater 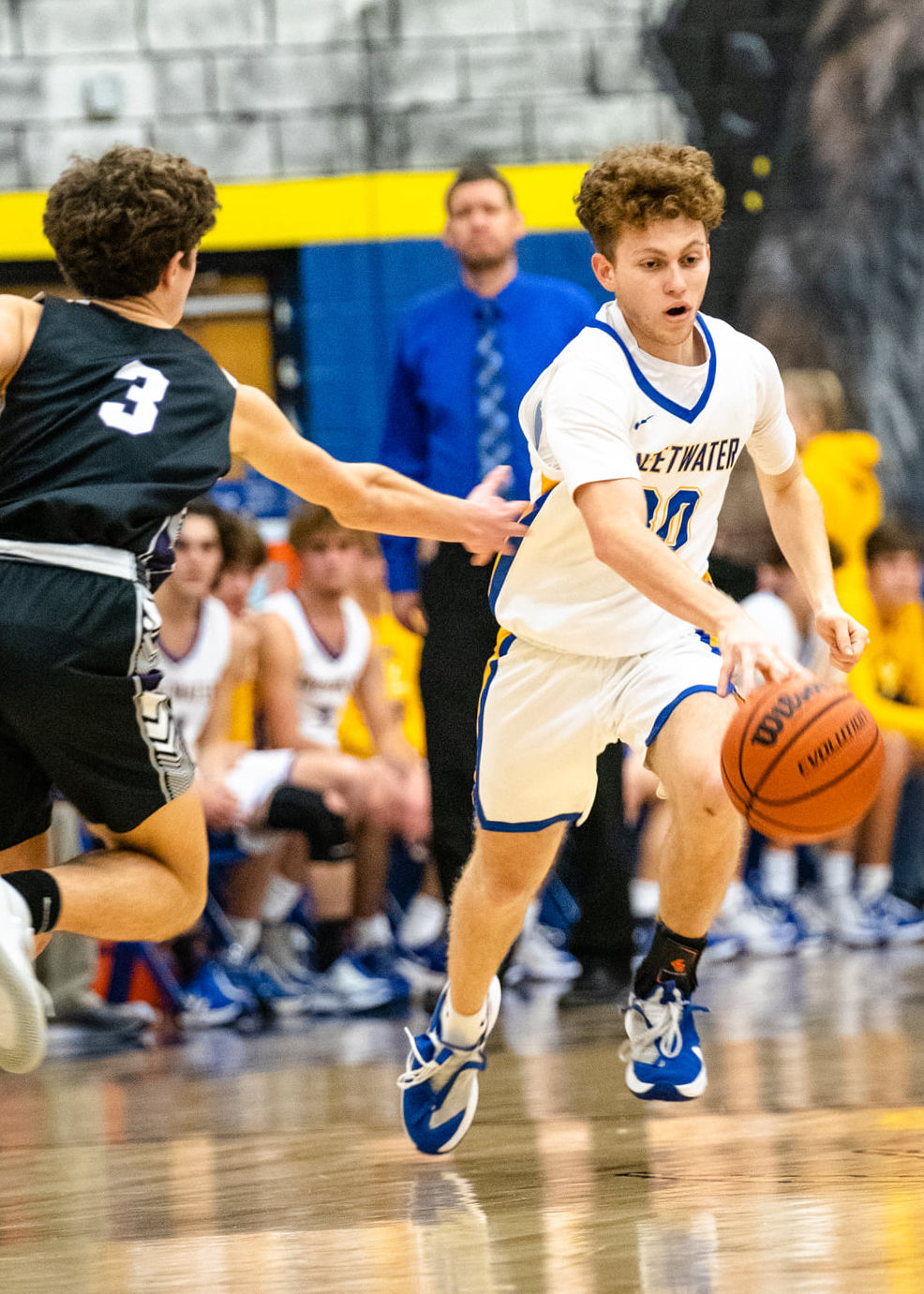 Kade Correll moves the ball for Sweetwater against the Knoxville Ambassador on Feb. 11 in Sweetwater. 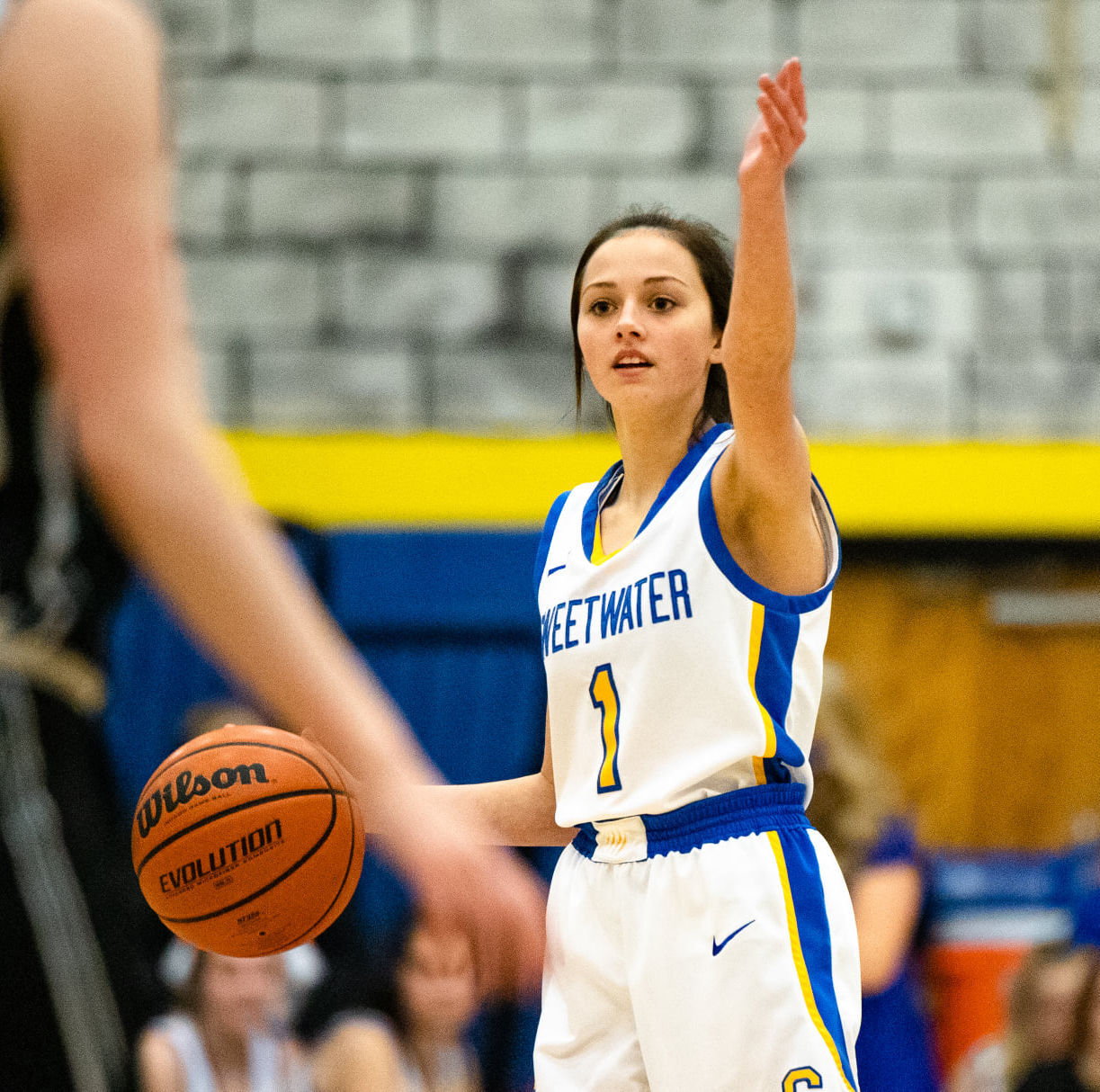 Abbey Davis moves the ball for Sweetwater against the Knoxville Ambassadors on Feb. 11 in Sweetwater.

Austin Long takes a free throw for Sweetwater on Feb. 11 in Sweetwater.

Abbey Barr gets ready to attempt a free throw for Sweetwater on Feb. 11 in Sweetwater

Kade Correll moves the ball for Sweetwater against the Knoxville Ambassador on Feb. 11 in Sweetwater.

Abbey Davis moves the ball for Sweetwater against the Knoxville Ambassadors on Feb. 11 in Sweetwater.

EDITOR’S NOTE: This preview was written before the Lady Wildcats and Lady Chiefs district tournament game, and will not reflect the results of that game.

Both teams in Sweetwater are heating up heading into the playoffs. The Wildcats have run through a tournament-like end to their district schedule, winning five district games in 10 days. However, both squads start their playoffs in elimination rounds at the Den. The Lady Cats host rivals Sequoyah on Tuesday, Feb. 16, while the Wildcats will meet Polk County on Wednesday.

Boys: Sweetwater struggled to get on the court in the first two months of the season due to COVID-19 issues, but now that they have gotten into consistent play, they have turned into a serious competitor in District 5-AA — highlighted by an overtime win over Sequoyah on Feb. 8.

The Wildcats’ (13-5) stretch down the season featured six straight wins, including two over Polk County. Sequoyah’s abbreviated start to the season left them with little on their record in the league, and had them in the lower half despite being one of the teams most in control of how they finish.

The growth is visible in Sweetwater’s season. After losing to Sequoyah by 20 in January, the Wildcats found their success. Coach Jeremy Henderson’s team is 8-1 since that game, with the lone loss being by seven at Loudon.

Back in January — Henderson said he needed a team of fighters and a team with the heart of Austin Long. Since then he has stepped up.

Gabe Leeper has been to the basket throughout the stretch. The sophomore, like he did against McMinn Central and Sequoyah, has added another shooter to the floor. Long remains the main threat — averaging 16.5 ppg.

Jayce Upton missed time on the court with an ankle and foot injury. Sweetwater looked like they might not see him until the tournament starts, but he came back a week earlier — another example of the heart that Sweetwater has found.

In the time without Upton, Carson Kile was called upon and managed the role effectively.

Henderson has two options at the big man. Dalen Gibby and Gibson Alford both have shown the physicality and effort they bring. Gibby has been more involved in the past couple weeks and Henderson has cited him as being one of the kids he has playing their heart out now.

Alford has been a solid option and carried a heavy load in the fourth quarter in the Sequoyah win. Kade Correll comes into the starting five and plays a role in spreading the ball around.

Things look like the Wildcats are poised for a district semifinal clash with Sequoyah. A win there would mean they start the region tournament at home. For the Wildcats, they could end up with anyone in the top four out of District 6-AA. Tyner Academy (15-2), Red Bank (10-8) and Howard (13-10) are all legitimate possibilities past the district tournament. However, Sweetwater has to take care of Polk County on Wednesday night before any of that can happen.

Girls: The Lady Cats start their postseason off the way any fan would love — hosting their rivals in the opening round. When Sequoyah comes to town, the Lady Chiefs will have to find a way to stop Trinity Upton. The junior completely took over the game last week at the glass and on the scoresheet. Sequoyah did not have an answer then as Sweetwater Coach Heather Jaramillo said it was the way she has been waiting on Upton to play all season.

Upton’s productivity could be the key to success for Sweetwater. She has added a scoring threat, along with Tennessee Wesleyan signee Abbey Barr. Barr is averaging 15 ppg while Upton has been getting higher numbers down the stretch. Working against Sweetwater, however, is they do not have a third person that can get to the basket.

Reagan Moree and Keke Norfolk have contested with each other for minutes, adding to the depth that Jaramillo has available. Moree, who missed time during the season with a non-COVID related illness, brings senior leadership while Norfolk is seeing quality minutes as a freshman.

While Sweetwater turned things around and beat a Lady Chiefs team that beat them in January, they have still had a tough run in District 5-AA. Finished at 3-7, all wins coming over lower seeds, the Lady Cats have a lot to work on to make a run in the District 5-AA tournament.

That starts at the glass. Sweetwater doesn’t score record highs night in and out. If they are going to succeed they need to limit second chances for the teams like Polk County, Meigs County and McMinn Central. Upton is the best rebounder available on Sweetwater — so it is a good thing she has stepped up. Emily Allen and Gracie Hart also have the ability to go and get the ball, and they will be needed to extend their chances.

The Lady Cats have lost to the higher three seeds by an average 23.4 points this campaign. A win over Sequoyah would mean they travel to McMinn Central in the District 5-AA semifinals.

Sweetwater kept pace when they visited the Chargerettes in early December before losing control of the game in the fourth quarter. Depending on the result, the Lady Cats would head to the consolation or championship game — meeting either Meigs County or the winner of Loudon and Polk County.

If the Lady Cats advance to the region tournament, they will have a tough road to travel. A loss to McMinn Central would send them to, most likely, Signal Mountain (17-3) or Tyner Academy (12-3) in the Region 3-AA quarterfinals. If they manage to get a lighter schedule in the region playoffs it could start off with a team like Brainerd (9-4), Red Bank (6-11) or Hixson (6-10).

Sweetwater has hinted at runs in the region tournament over the past few years. The next step for the Lady Cats would be a region championship appearance, but standing in the way of that is the success that teams like McMinn Central, Meigs County and Signal Mountain are having.