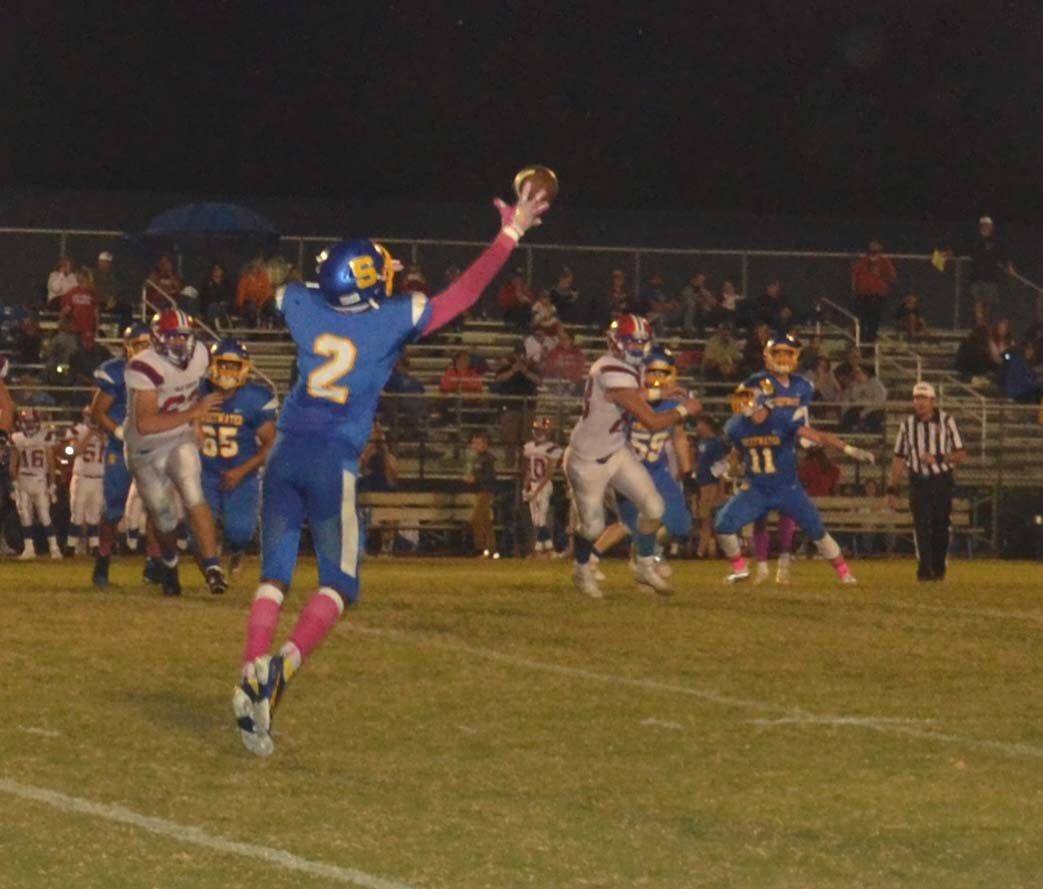 Sweetwater receiver Kaleb Johnkins reels in a one-handed grab Friday night during the Wildcats’ victory over Polk County. Johnkins scored three times in the first quarter and this catch set up a Jayden Barker touchdown one play later. 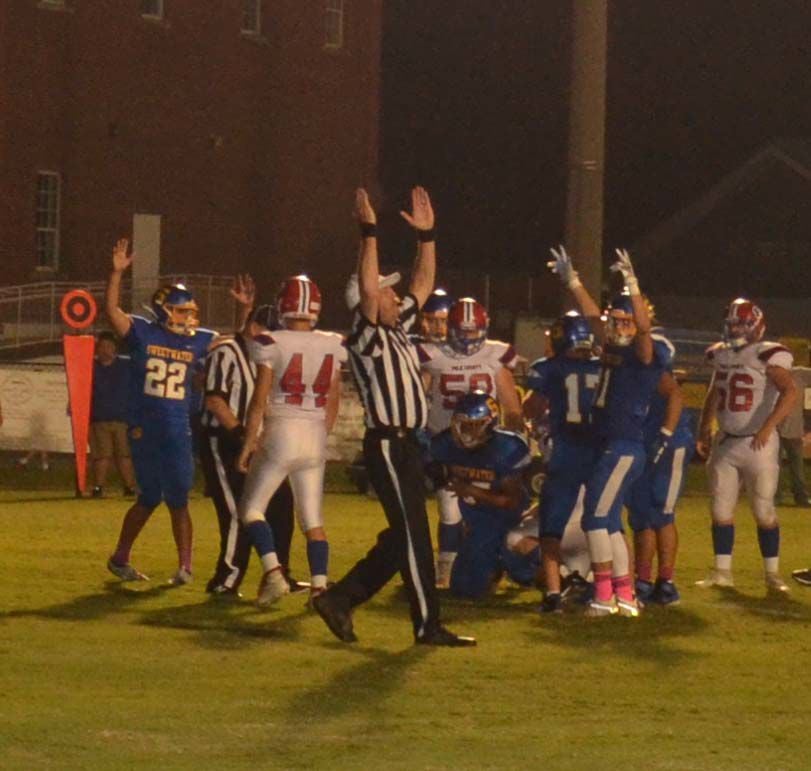 Arms were raised Friday night as Sweetwater defensive lineman Keyshawn Buchanan (65) fell on a Polk County fumble for a touchdown.

Sweetwater receiver Kaleb Johnkins reels in a one-handed grab Friday night during the Wildcats’ victory over Polk County. Johnkins scored three times in the first quarter and this catch set up a Jayden Barker touchdown one play later.

Arms were raised Friday night as Sweetwater defensive lineman Keyshawn Buchanan (65) fell on a Polk County fumble for a touchdown.

The Sweetwater receiver scored three of the Wildcats’ six first half touchdowns and the hosts scored in every facet of the game on the way to a 49-0 win over Polk County.

Johnkins opened the game fielding the kickoff, weaving to the right side of the field and then sprinting 95 yards for the game’s first touchdown. Jesus Guzman’s point after was good and special teams put Sweetwater up 7-0.

“We talked about it before we came out – we just wanted to get it started quick and take care of business early,” Sweetwater Head Coach Mike Martin said after the game. “Kaleb did a good job on the kickoff return, hitting the seam and hitting it at full speed.”

Martin said he was pleased with Johnkins’ performance, as well as that of the rest of the team.

“He always comes to play,” Martin said of Johnkins. “I was just proud of our team as a whole — we came out and executed.”

After a three and out for Polk, the Wildcats took possession at their own 30.

A mix of runs by Bryce Johnson, Simon Blomstrom and Johnkins moved the ball to the Polk 24 when Sweetwater quarterback Austin Long hit Johnkins with a fade in the right corner of the end zone.

Another quick three out by Polk set up a five-play Sweetwater scoring drive. Johnson and Long both carried the ball and the quarterback connected with Ty Ezell for 14 yards as well.

Facing second and 10 on Polk’s 45, Long looked to his star receiver once again, this time down the left sideline. Johnkins pulled in this pass over two Polk defenders and cruised to paydirt. Guzman once again was true on the PAT to put Sweetwater up 21-0.

That lead would extend once again on Polk County’s next possession, as a Polk backward pass went awry and was scooped up by Jovan Johnkins. With several other Wildcats in tow, he rumbled 25 yards for the score and Guzman made it 28-0 after one quarter.

Polk would pick up its only two first downs of the first half on the ensuing drive, but ultimately punted from Sweetwater’s 44.

With possession once again, the Wildcats went to work, as Long took over the drive and connected on passes to Kaden Duprey, Ezell, Ryan Littleton and Kaleb Johnkins – a pass that came in a little behind him, but he snagged with one hand and took to the Polk 13. The drive was capped by Jayden Barker’s 13 yard touchdown run and Guzman extended the hosts’ advantage to 35-0.

On the second play of Polk’s ensuing drive, Johnson burst through the line to disrupt the handoff and Nick Brown fell on the fumble. That gave Sweetwater possession at Polk’s 20 and it took one run each by Wesley Bean and Brown and then two by Barker to reach the end zone again. After Barker’s touchdown run, Chance Campbell knocked through the point after and Sweetwater led 42-0 with 28.7 seconds left in the half.

The second half was significantly shortened by the mercy rule, but featured seven runs by Isaac Price for 34 yards and a couple of rushes by Jayven Melton as well.

Red Report: Manning getting closer; return of Reimer; no change in plans; homecoming for Rogers

Bears TE Cole Kmet makes another key play, might have earned himself a bigger role

The lone score of the second half came after Sweetwater’s punt was downed at Polk’s three yard line. Polk was pushed back to its own one yard line on the opening play of the drive and then the visiting quarterback fumbled the next snap.

Sweetwater’s Keyshawn Buchanan fell on it in the end zone for the score and Guzman added the point after for the final tally. That marked Sweetwater’s second defensive score of the game.

The Wildcats scored in all three phases – offense, defense and special teams – in the victory.

“That’s what you want,” Martin said. “Everybody got involved.”

Kaleb Johnkins finished the game with 203 all purpose yards and three touchdowns – 99 yards and two scores receiving, nine yards on one rush and the 95 yard kick return.

Long completed eight of 10 passes for 152 yards and a couple of scores and rushed once for 14 yards.

Barker led the Sweetwater ground game with 41 yards and two scores on four carries. Price tacked on 34 of his own on seven touches.

Jovan Johnkins and Buchanan supplied defensive scores for the Wildcats.

Now, Sweetwater turns its attention to a big Region 3-3A game this Friday night as Loudon comes to town.

The Redskins are undefeated this season at 7-0, with the smallest margin of victory being a 35-18 win at Brainerd. They’re 3-0 in the region, with wins over Brainerd, Signal Mountain (55-21) and McMinn Central (41-0).

“They gave us a good ol’ whipping the last few years,” Martin said. “I can’t wait until Friday and I hope the kids feel the same way.”

He said preparation is going to be important as the Wildcats get ready to face the fourth-ranked team in the state.

“We’ve got to have a great week of prep and I hope this place is packed and we have a good ol’ Loudon-Sweetwater rival game,” he said.

Whether the the Wildcats can notch their second region win this Friday night is a tough question to answer, though.

“We’re going to play it and find out,” Martin said.