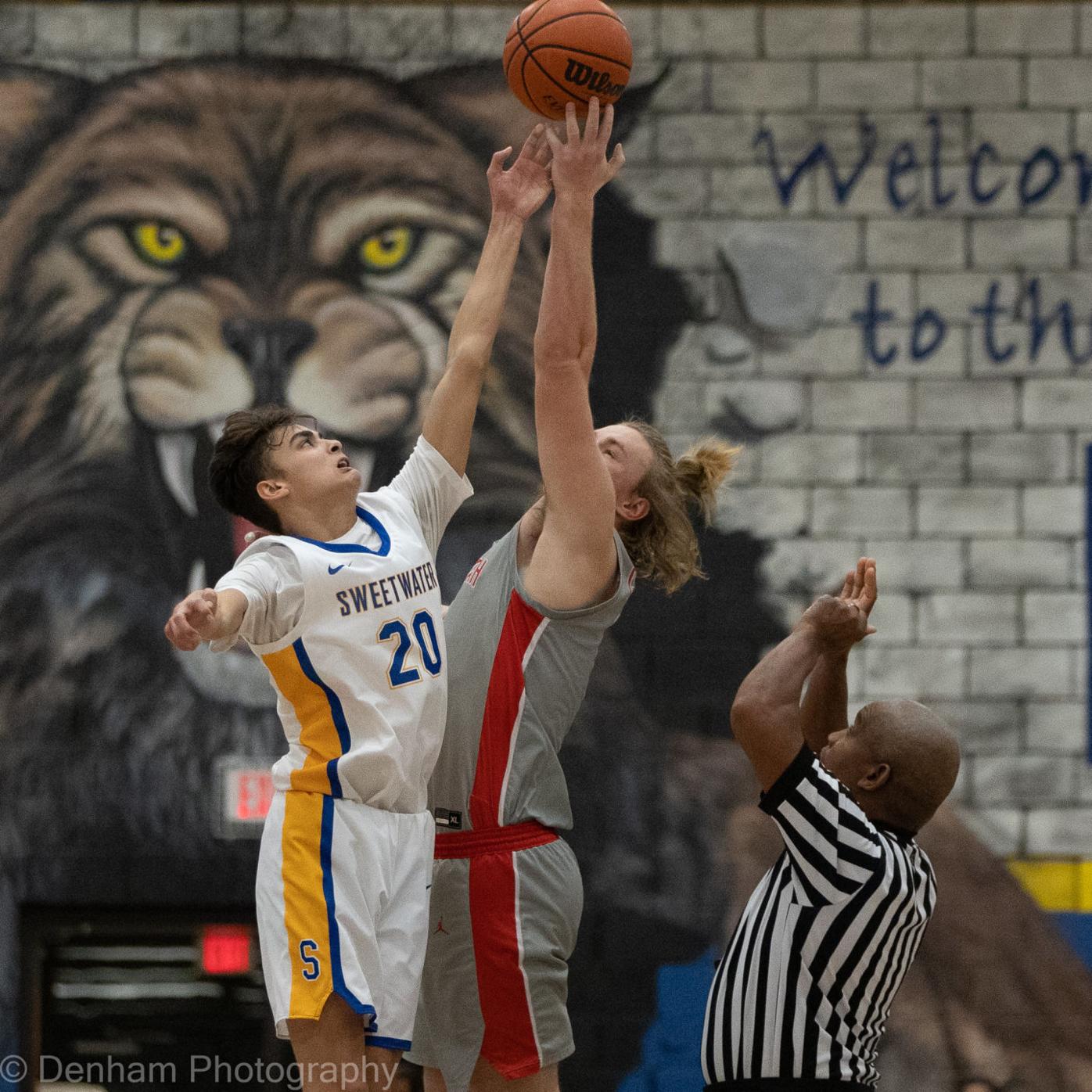 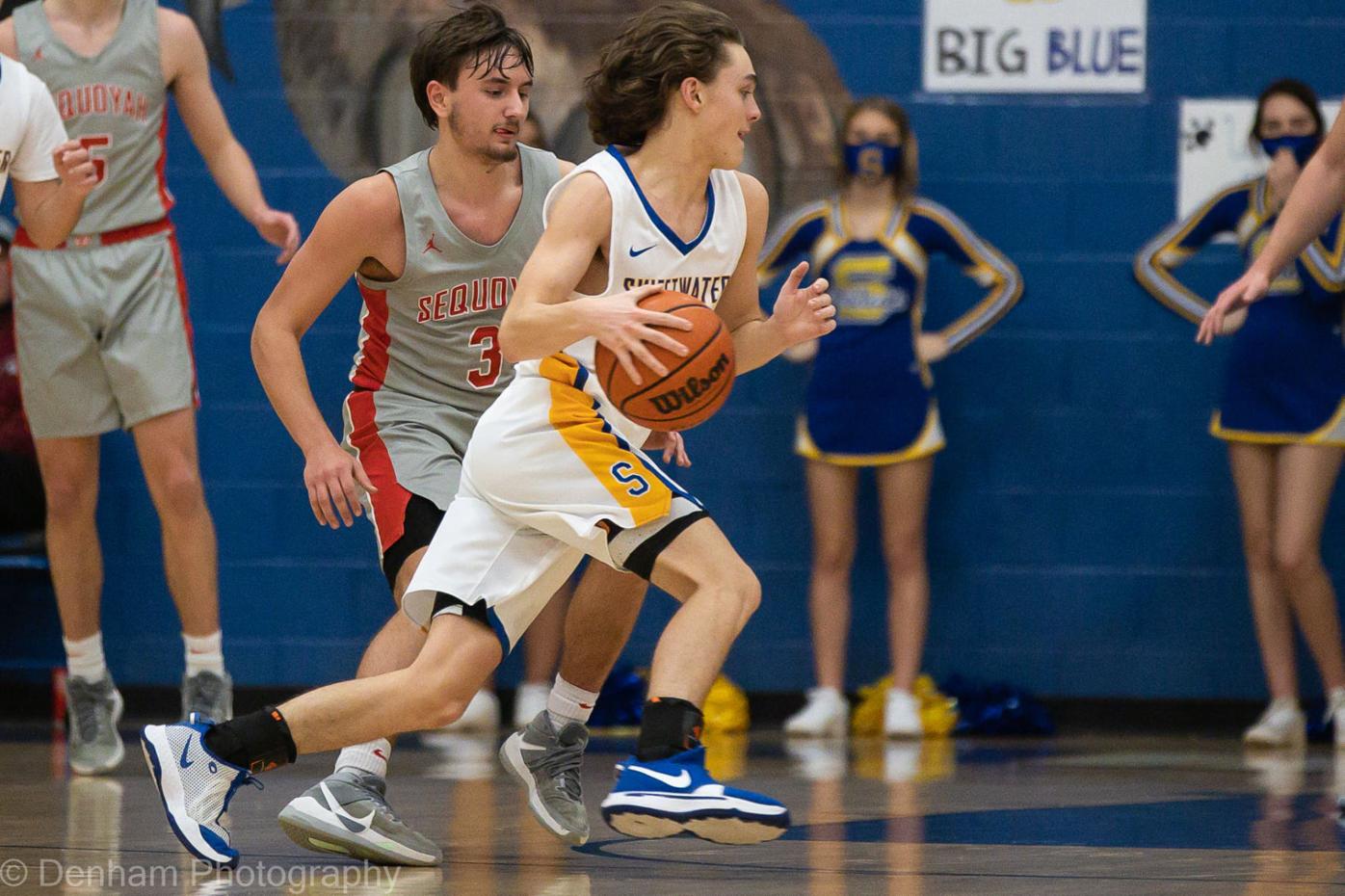 Carson Kile moves the ball for Sweetwater in the Wildcats’ 62-59 win over Sequoyah on Monday in Sweetwater. 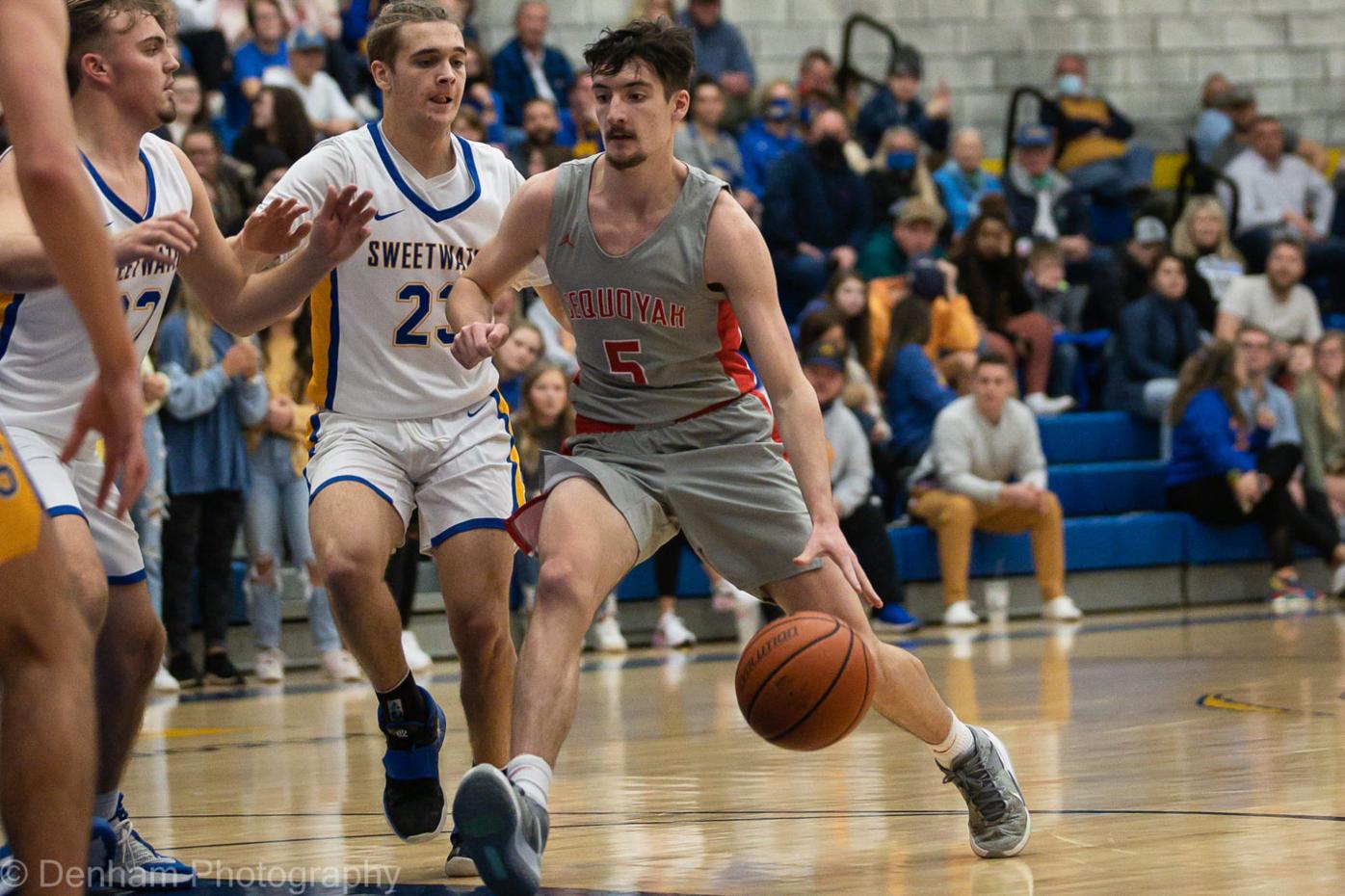 Dillon Stakely moves the ball for Sequoyah in the Chiefs’ 62-59 overtime loss to Sweetwater on Monday in Sweetwater. 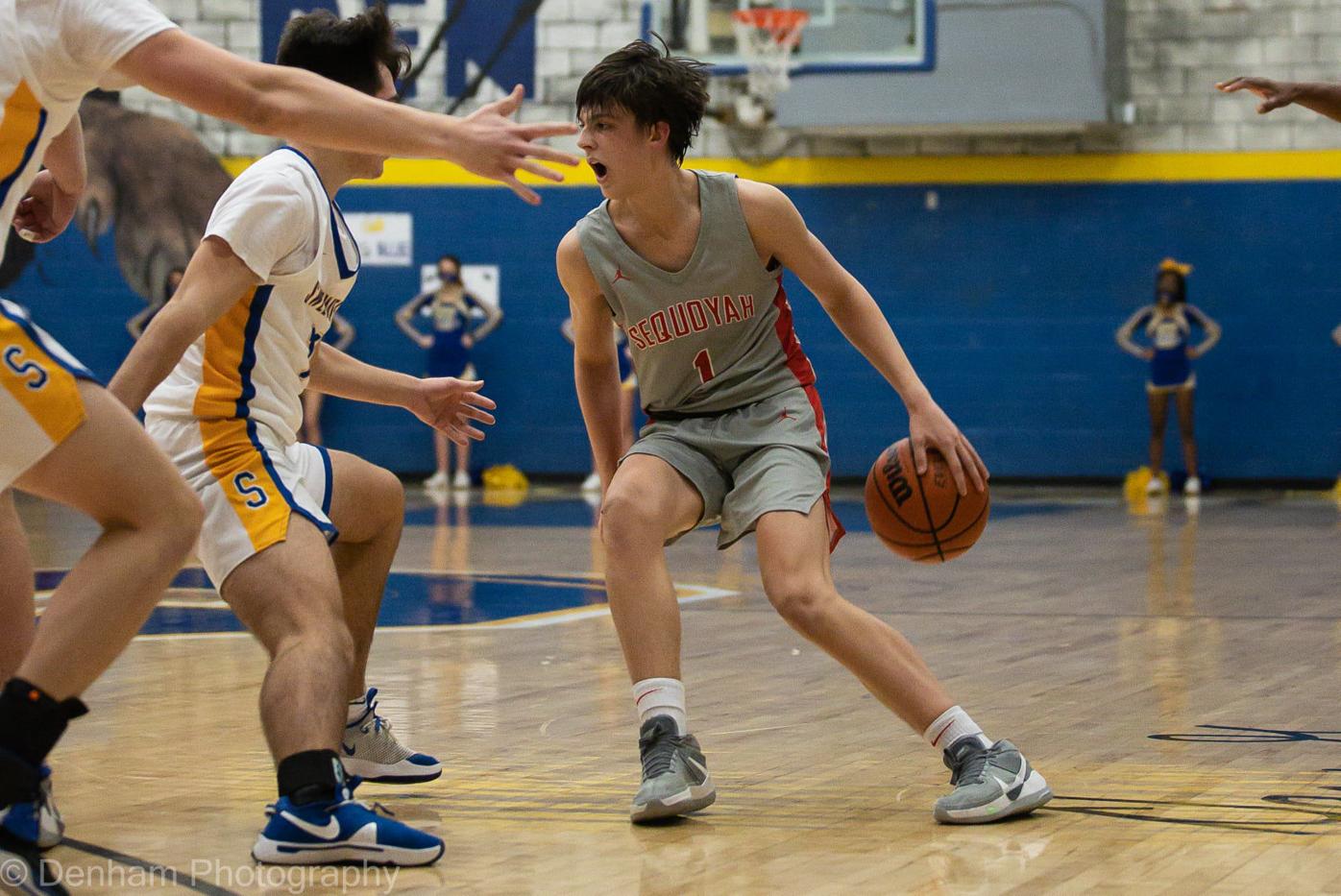 Caleb Sloan moves the ball for the Chiefs in Sequoyah’s 62-59 overtime loss to Sweetwater on Monday in Sweetwater.

Carson Kile moves the ball for Sweetwater in the Wildcats’ 62-59 win over Sequoyah on Monday in Sweetwater.

Dillon Stakely moves the ball for Sequoyah in the Chiefs’ 62-59 overtime loss to Sweetwater on Monday in Sweetwater.

Caleb Sloan moves the ball for the Chiefs in Sequoyah’s 62-59 overtime loss to Sweetwater on Monday in Sweetwater.

It took four extra minutes to find the difference between Sweetwater and Sequoyah on Monday night.

But when the dust settled, in a long night that represents a long season for the Wildcats, it was Sweetwater on top 62-59 in overtime.

The spark for Sweetwater was a sophomore. Gabe Leeper, softspoken, stepped up for the hosts and had a 22-point night.

Things did not look good for the Wildcats in the final minute. They trailed by six and looked like they might fall to Sequoyah who had the chance to tie for the regular season District 5-AA title if they won.

Leeper stepped up — from a long way out. He banked in a deep three to bring the game to one possession. Work still to do, but in one motion the sophomore cut the load in half.

“The shot was there, and I took it. It went in,” Leeper said.

If things were not dramatic enough, Jayce Upton, who was medically cleared to play earlier in the day, took the ball to the basket twice. A free throw from Sequoyah’s Dillon Stakely kept things locked at 54 each.

“Gabe Leeper had a heck of a night,” Sweetwater Coach Jeremy Henderson said. “A sophomore stepping up and had a heck of a night. Jayce Upton came back and didn’t play bad at all. You can see he is still not 100% right now, but he is close. He got released this afternoon. He felt good and he wanted to play — it’s Sequoyah and it’s a rivalry. I watched him run on it and cut on it — he was good to go.”

Early into the season, Henderson asked for guys to have the heart of his senior captain Austin Long. The Wildcats have been getting better as the season goes on, and the heart showed Monday.

Long was not the one called upon to make the needed play, maybe because it was expected for him to have the ball — but the result shows that Henderson’s squad has formed together with players showing the ability to step up and make the plays when they are needed. Not just one player, but a team.

“I love the fight and the way they battled. We got it to overtime — I got a little fired up and said ‘we did not come this far just to (lose). Let’s go take it,’” Henderson said. “It was a great response from these kids. Gibson Alford may not show up a lot in the scorebook, but I thought Gibson Alford had a really good night. Austin was Austin. Jayce was Jayce for what he could bring today. Gabe Leeper just kept making play after play after play.”

After the comeback was complete, Sweetwater sent the game into overtime.

Alford and Upton scored from the floor for the Wildcats, but it was Long and Leeper’s free throws that sealed the win. Henderson did not look to change anything tactically for his team, he just wanted to see his group go in and try to gut it out.

“I don’t think it was anything in particular,” Henderson said. “I tell you what, I am exhausted from coaching that game. We wanted that game, and I am so proud of the kids. We were down six points with a minute to go, and it was not looking great for us, but we made a couple plays. That is what has been missing this year is someone stepping up, making the play, never quitting and just fighting. It was not pretty. I was not very pleased with the actual execution on some of our plays, but we had some guys playing out of position on some of our plays.”

On the other side of the court, Sequoyah Coach Andy Pennington had a similar message heading into overtime — stick to what is working.

“That the game is not over,” Pennington said. “It was like a new half. You have to win those first three minutes, set the tone and keep doing what we were doing.”

With the run that Sweetwater went on, it would have felt that Sequoyah lost the game at the end of the fourth. Momentum was in full favor of the hosts, but there was still basketball to play.

Jackson Kuberka had five points in overtime, finishing with 16 on the night. Sequoyah has been comfortable with scoring the ball this season, but something that Sweetwater was doing took that away late.

“Basketball is a tournament sport and anything can happen next week. These kids have to show some character and we have to get some mojo back. We are fine. We won seven district games in a row, and even though the streaks have ended we hadn’t done anything wrong. We lost to a good basketball team on the road — it just wasn’t our night tonight.”

Sequoyah started out the night with a 7-0 run and held a seven-point lead in the fourth quarter as well. The Chiefs had the leads needed to seal the game, but Sweetwater kept coming at them.

Sequoyah’s loss secures them as the second seed in the district. Loudon (8-2 in District 5-AA) wins the regular season title and the top seed. Even if Sweetwater wins their final district match and tie Sequoyah at 7-3, the Chiefs have a win over the one seed, giving them the tiebreaker.

Dating back to Tuesday, Feb. 2, the Wildcats have won four district games in seven days.

“I think we finally hit our stretch to where we were last year,” Leeper said. “We found our stretch at the end of the season last year, and that is probably where we are at now. We just have to keep it going into the tournament.”

Earlier this week, on Tuesday, Feb. 2, Sequoyah’s Stakely hit a career milestone. The junior surpassed 1,000 career points in a 61-49 win at Maryville Christian.

“He is a great shooter,” Pennington said. “Everybody knows it. You are not born a shooter. He has a coach who understands what it takes to be a good shooter. When I saw his work ethic as a freshman it doesn’t surprise me that he has 1,000 points. I know it is Dillon’s accomplishment, but it is a team accomplishment. His teammates have supported him and encouraged him. I am proud of Dillon for his accomplishment.”