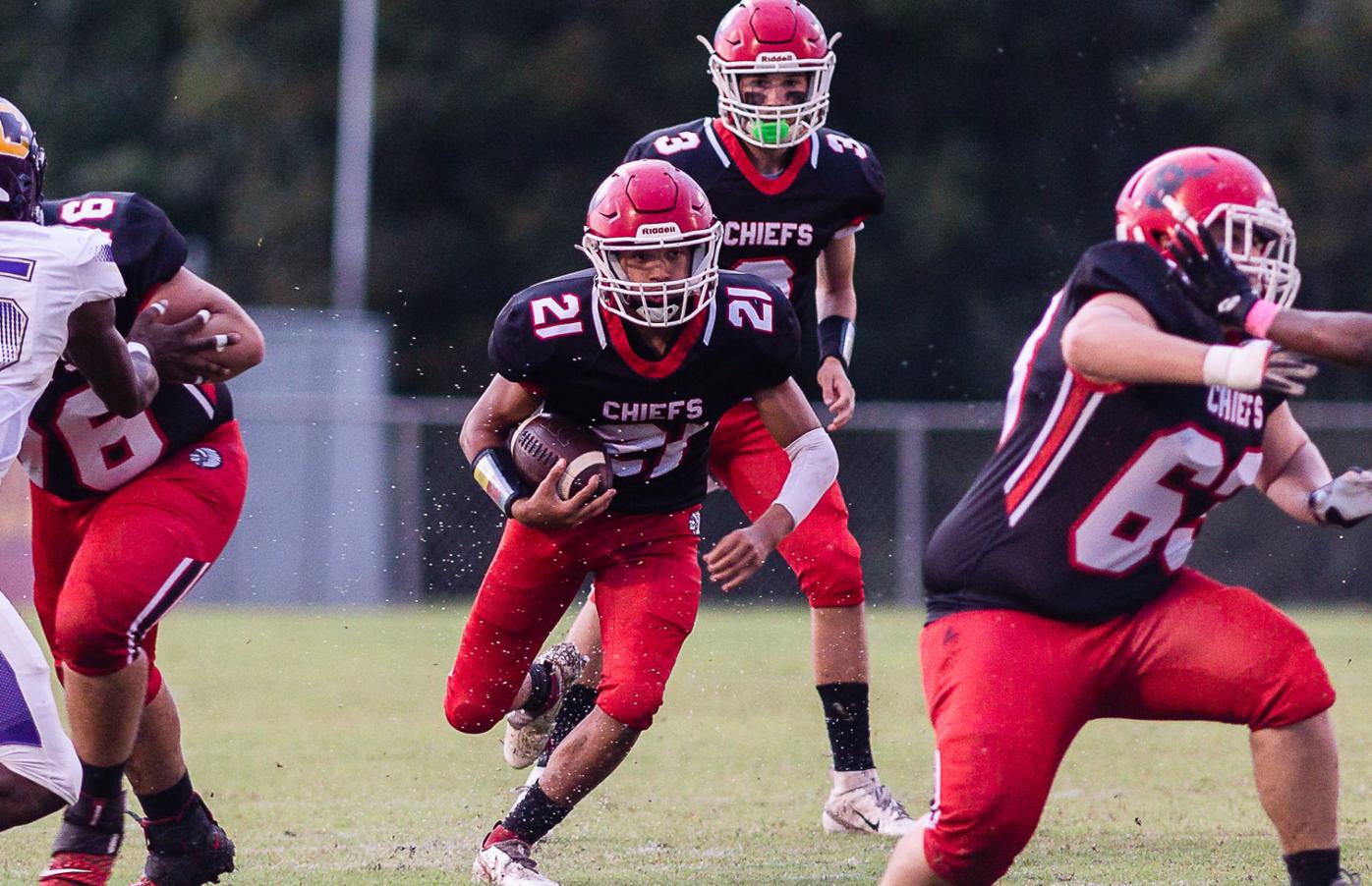 Sequoyah’s Kylan Carson (21) runs between two blocks during the Chiefs’ 35-0 loss to Chattanooga Central on Oct. 7 in Madisonville. 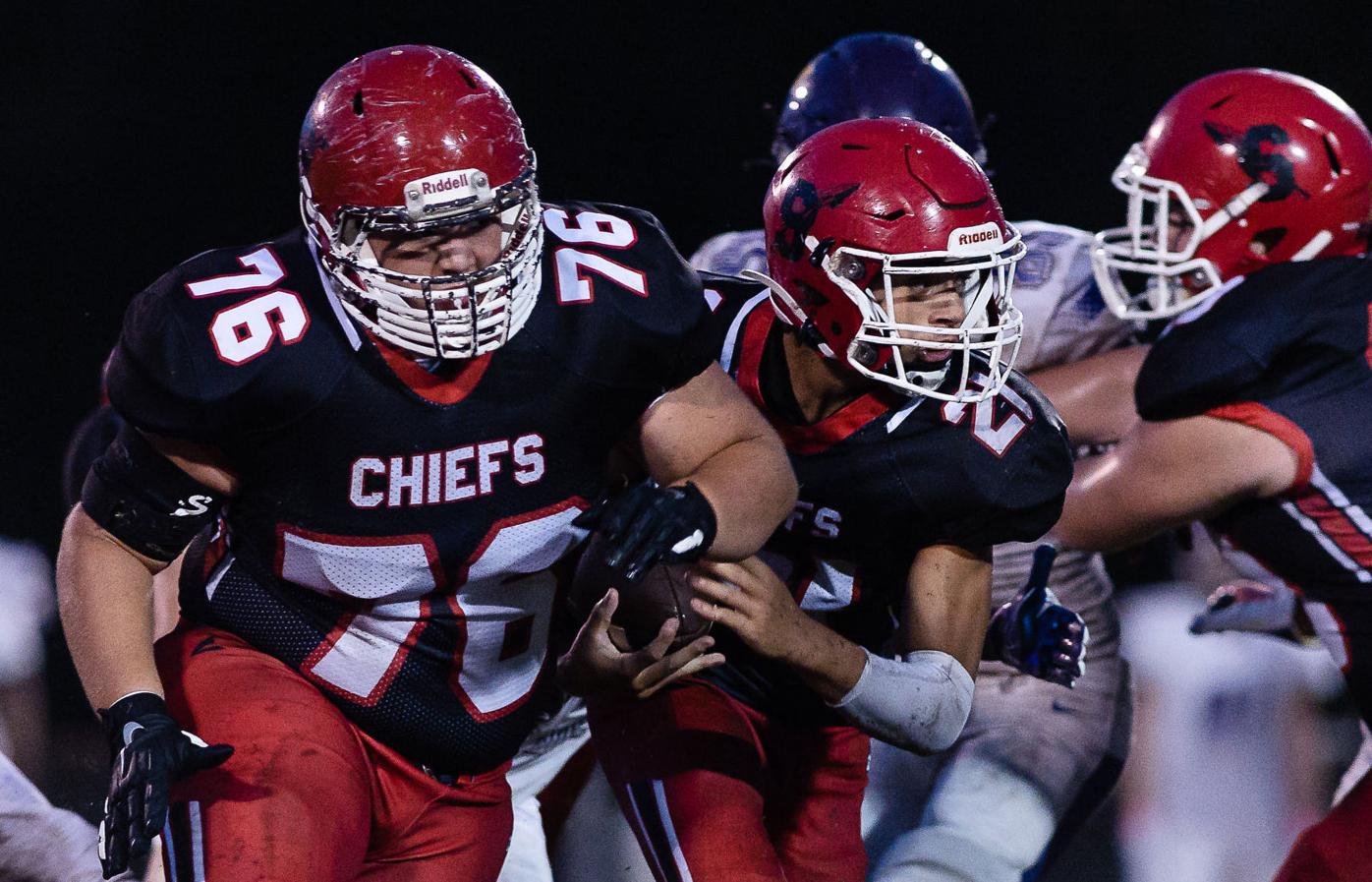 Sequoyah’s Cooper Lovingood (76) creates a lane for Kylan Carson during the Chiefs’ 35-0 loss to Chattanooga Central on Oct. 7 in Madisonville.

Sequoyah’s Kylan Carson (21) runs between two blocks during the Chiefs’ 35-0 loss to Chattanooga Central on Oct. 7 in Madisonville.

Sequoyah’s Cooper Lovingood (76) creates a lane for Kylan Carson during the Chiefs’ 35-0 loss to Chattanooga Central on Oct. 7 in Madisonville.

Battling a Chattanooga Central team that has greatly improved along with heavy rain, Sequoyah football managed to continue some trends.

The Chiefs moved the ball well, similar to their Polk County game in Week 2 — but could not capitalize on the opportunities they put themselves into.

“A lot of our mistakes just come down to fundamentals,” Interim Coach Dustin Peels said. “We will get a bad holding call, so it is really just fundamentals and keeping your hands inside and not reaching. (The kids) have to know what they are supposed to do on each individual play.”

Running into fundamental issues in Week 8 is not a situation that most teams want to be in, but it is a part of the process of an improving team.

“Fundamentals should always be a part of what you do. It is something that we have started working every single day. We just have to keep pushing,” Peels said. “We are improving as a football team, but we have yet to put it together all the way yet.”

Eddie Duncan forced a fumble on the opening kickoff to set the Chiefs up in good position. Emilio Sanchez and Emmitt Duff both earned interceptions while Zack Webb forced a fumble later in the bout.

Jim Polzin: Wins are piling up for the Packers — but so are the injuries

“We moved the ball offensively, but our issues had plagued us all year,” Peels said. “We will drive the ball, get around the opponents 20 or 30 yard line and then get a dumb penalty or make a mistake and turn the ball over. It was kind of the same thing in that aspect.”

While the weather did create problems for Sequoyah, having a week in the rain to prep helped to get more comfortable in the conditions.

“This week we were fortunate — the whole week of practice it was pretty wet,” Peels said. “Wet football drills are the best way you can do in that situation, so there is not really a way you can simulate what the footing is going to be like unless it is already wet outside.”

The Purple Pounders (5-2, 4-1) are much improved from their two-win season a year ago — the two being over Sequoyah and a COVID-19 forfeit win over Southeast Whitfield County (Ga.) Five wins is the most for the team since 2018 and a 23-21 win over Red Bank on Sept. 17 has the Purple Pounders poised for a second place finish in the region and a home playoff game.

Chattanooga is averaging around three and a half touchdowns per game — and 26.7 points per game. A stark improvement from the team that was held to six points or less in four games a year ago.

“They have a few really good athletes on their team and they are fast and physical up front. That, along with the weather, gave us some issues,” Peels said.

Chattanooga Central nailed two long passes in the first half for scores — cruising into a 14-0 lead after the first 12 minutes and 20-0 at halftime.

Sequoyah is looking for an opponent to face this upcoming week. After a COVID-19 related cancelation in Week 3, the Chiefs are at only nine games on the schedule. Sequoyah returns to action vs. Oneida on Oct. 22.