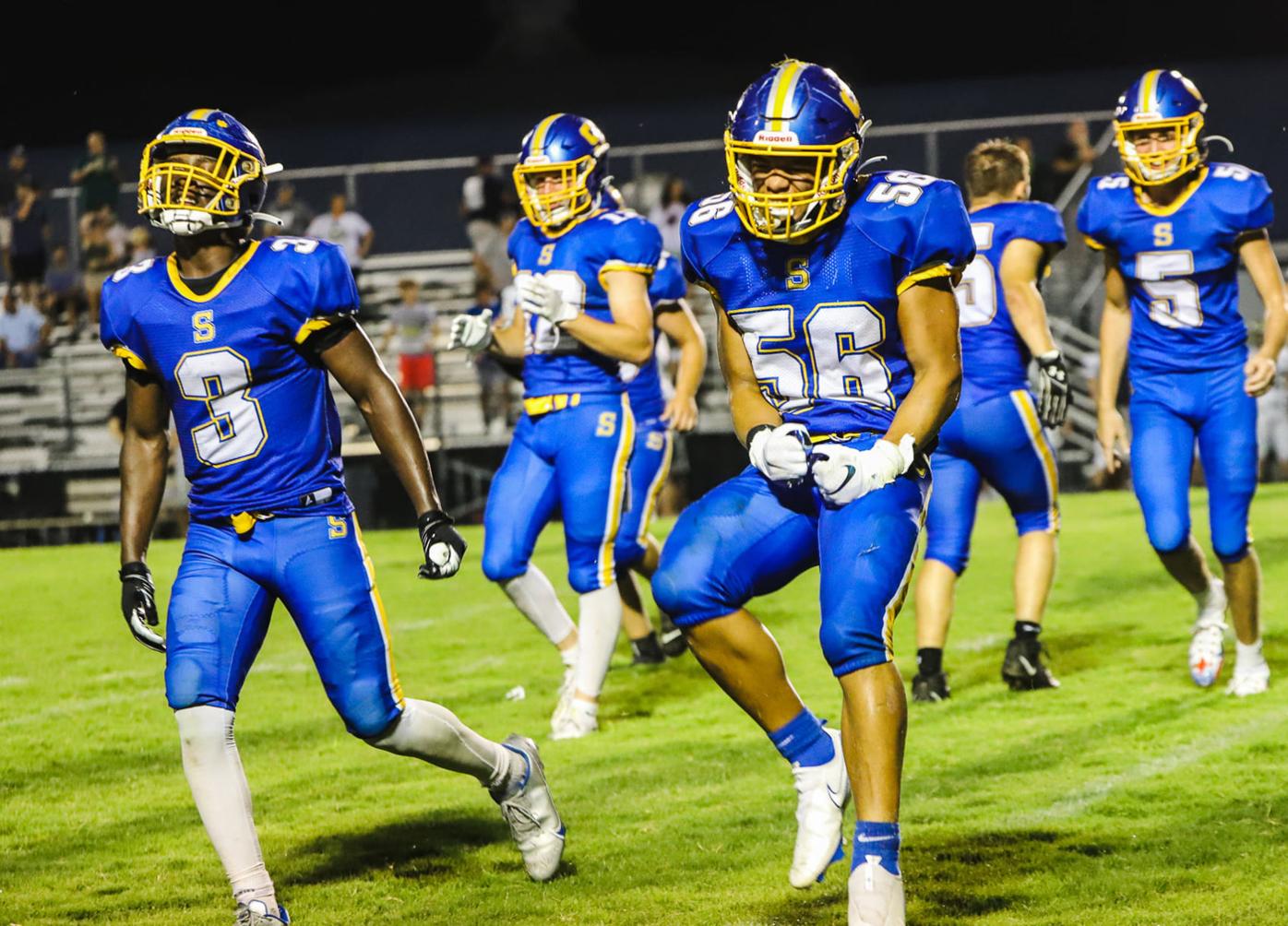 Sweetwater’s Tres Stone (56) lead the Wildcats off the field during a 36-35 overtime win over Rockwood on Aug. 27 in Sweetwater. 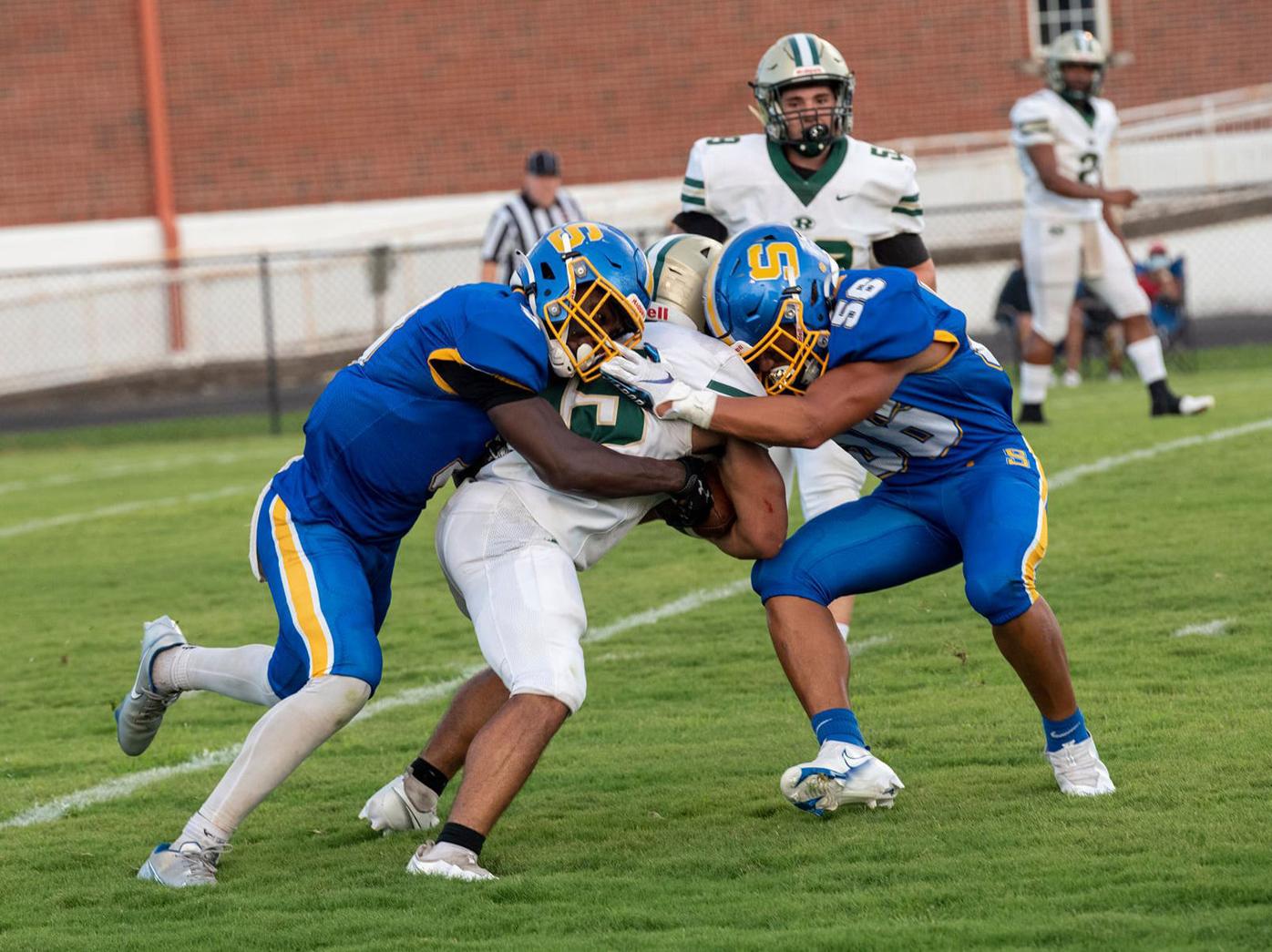 Tres Stone (right) and another Sweetwater Wildcat make a tackle during the team’s 36-35 overtime win over Rockwood on Aug. 27 in Sweetwater. 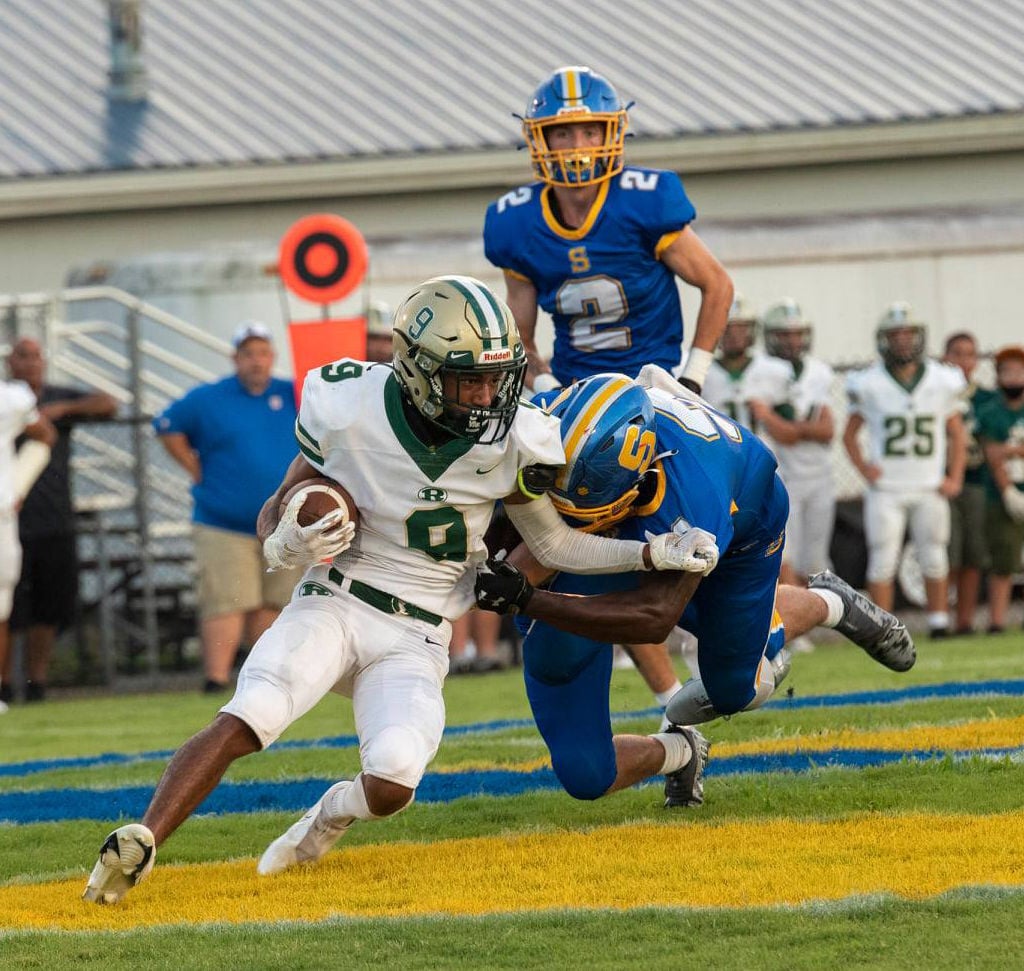 A Sweetwater Wildcat makes a tackle during the team’s 36-35 overtime win over Rockwood on Aug. 27 in Sweetwater.

Sweetwater’s Tres Stone (56) lead the Wildcats off the field during a 36-35 overtime win over Rockwood on Aug. 27 in Sweetwater.

Tres Stone (right) and another Sweetwater Wildcat make a tackle during the team’s 36-35 overtime win over Rockwood on Aug. 27 in Sweetwater.

A Sweetwater Wildcat makes a tackle during the team’s 36-35 overtime win over Rockwood on Aug. 27 in Sweetwater.

Landon Boyd is progressing into his role as the starting quarterback at Sweetwater.

On a night where he tossed for over 100 yards and three scores, his most important throw came last. Lane Hicks, just crossing over the goal line, caught Boyd’s 2-point conversion attempt as the Wildcats surmounted a 22-point deficit to achieve a 36-35 win over Rockwood in overtime Aug. 27.

Trailing 21-0 in the second quarter, 21-6 at halftime and 28-6 in the third quarter, Sweetwater (1-1) had their backs against the wall in King Berrong Stadium.

With a number of players from the 1971 team in attendance, a young and inexperienced Sweetwater team rose to the occasion to snag their first win of the season.

“If you fight I can live with that. I don’t care what our schedule is or who we play, as long as our kids fight I can live with that. Probably half our fans left because they quit on us. That’s just what Sweetwater people do is they just quit. That is why we have to teach our kids the whole time when we get them from freshman to senior year is to not quit and to finish the game out. So to all those people who left, shame on you. You should have to come back and pay $7 more,” Sweetwater Coach Mike Martin said. “That’s what we do here (is fight). That is what our country, our state and this town does is fight. It is easy to just quit, but we teach our kids not to quit. I think that showed last week against Meigs County. I don’t care what the score is, but if you are on the football field you don’t quit. As long as our kids fight I can sleep good at night and I slept pretty good (Friday) night.”

Boyd connected with Jayden Barker for a 7-yard touchdown in overtime. Rockwood went ahead in overtime off a 4-yard run from Dakota Waldo.

Sweetwater kicker Jesus Guzman had not missed an extra point on the day, but Martin wanted to show the trust in his team. Per Martin, he knew once they reached that spot, a chance to win, he was going for two.

“We had already decided to go (for the win). That is something we prepare for every week. I was going to go for two multiple times if we made our first one. But you don’t want to chase points for three and a half quarters, so we kicked extra points on the next three. We were chasing a one-score game,” Martin said. “When we got the ball with four or five minutes left we were going to have to go for two. We had gone over the play in our position meetings before the game. We actually have three plays in one. We call it at the line and do a dummy call to see what (Rockwood) was in. We signaled in what we thought looked the best — Landon Boyd and Lane Hicks executed it and it ended up working out for us.”

Late in the fourth quarter, chasing the Tigers, Martin faced a decision. In his third season at the school, Martin knew what he wanted to do on fourth down with 3:35 left in the game, down 28-20.

“I’ve got to have confidence in us. If we are going in I’m going to trust us. We had two or three fourth down conversions on that drive. I told Landon and the offensive line we don’t have a choice, we have to go and get it, and they found a way to go and get it,” Martin said, adding not going for the score wasn’t an option. “Never. I wasn’t going to punt. They have too many skill people and they are too good offensively to give them the ball back. That never entered my mind at all.”

Rockwood went ahead 7-0 with just over two minutes played. The Tigers (1-1) doubled their lead at the 5:42 mark in the second quarter before Dryston Turner picked off a Boyd pass and returned it for a three score lead.

Even at that point, Martin did not doubt his team.

“As bad as it was at halftime, I felt really good. We continued to shoot ourselves in the feet, but I still felt really good. We thought we would come out from halftime and score, but we didn’t and they scored,” Martin said. “We had some success moving the ball, we just needed to put it in.”

His approach mirrored what he did in Week 1 against Meigs County, reminding his team to keep fighting.

Another slow start hampers Missouri in loss to Texas A&M

“I told them the same thing (from last week). I didn’t feel like we were down 21-6. I felt good and should feel good. We just needed to go out there and finish, whether it is offense or defense. I felt like if we fixed our mistakes we would be OK,” Martin said. “You don’t even know if a 15, 16 or 17 year old is listening to you, but obviously they believed in something and we just kind of took advantage of turnovers that our defense created.”

Despite being outscored by 15 points in the first half, Sweetwater turned the tables, outscoring Rockwood 14-7 and 8-0 in the third and fourth quarters.

“They have some speed and they can change fields. We talked about staying in our pursuit lanes — we pursued the football every day in practice. I thought we did a better job with that and we rode some coverage and pulled an extra secondary up to help us on the run,” Martin said. “With that being said, I am going to call it like it is. Their quarterback got hurt in the fourth quarter and that hurt Rockwood. We really laid out on the run to stop the run and took our chance with the pass.”

Malik Arnett put the Cats on the board with 1:27 left in the first half with his first touchdown run of the season. Arnett’s 5-yard score cut the guests’ lead down to 21-6.

Less than a minute after Rockwood went up 28-6, Boyd hit Ryan Littleton for a 40-yard touchdown, his first of the game, with 5:44 left in the third quarter.

Boyd passed for 115 yards and three touchdowns with a long of 42.

“He has had two solid games, but we have to cut out the pick sixes. He has had two in two games, but he settled down. (Friday) night he just had a bad throw. That’s going to happen, you see it on TV on Saturdays and Sunday,” Martin said. “The two throws he made for the touchdown to cut it to two, and the two point conversion — anyone that wants to ask why he is at quarterback, just look at those two throws and how he handled himself.”

Under two minutes left in the third quarter, Arnett’s second touchdown of the game helped the Cats claw back. Arnett ran in from six yards out to cut the score to 28-20. Arnett carried the ball a whopping 30 times for 178 yards and two touchdowns.

“I honestly did not realize I toted him that many times. In my career I never handed the ball 30 times to someone. We probably should have got him out, but Brayden Westfield was on defense. It was a pretty humid night and Westfield got banged up running the ball, so we tried to keep him on defense,” Martin said. “Jayden Barker was at fullback most of the night, so we got to run two backs. We had a couple of backs that were in quarantine, so we are pretty thin. Coach Dustin Latham, his position coach, told him not to look over here because he is staying in. We were going to ride him and we were going to win the ball game. I think Malik grew up a little last night too.”

The Wildcats travel Friday to open up Region 3-3A play against Loudon (2-0), which is ranked third in the AP Class 3A poll. After a bye week, Sweetwater hosts the seventh ranked team in Class 3A Kingston (2-0) in region play.

“We go to the No. 3 team next week in our first region game, a pretty daunting task if you ask me. We don’t have to beat them 10 times, we just have to beat them once. If we can get some things going you never know,” Martin said.

Martin believes Friday’s comeback win will go a long way for several of the freshmen and first year starters on the Wildcats team.

“(The coaches) talked about (confidence) this morning. We hope (the kids) gained some confidence out of that because that is a pretty hole they got out of. It is just an experience thing. We are a Sweetwater High School football team. It doesn’t matter what grades we are, for these guys to get more playing time with the new starters you are going to have ups and downs,” Martin said. “We have grown and I think we showed an improvement from Week 1 to Week 2.”

Sweetwater and Loudon kick off at 7:30 p.m. Friday night.