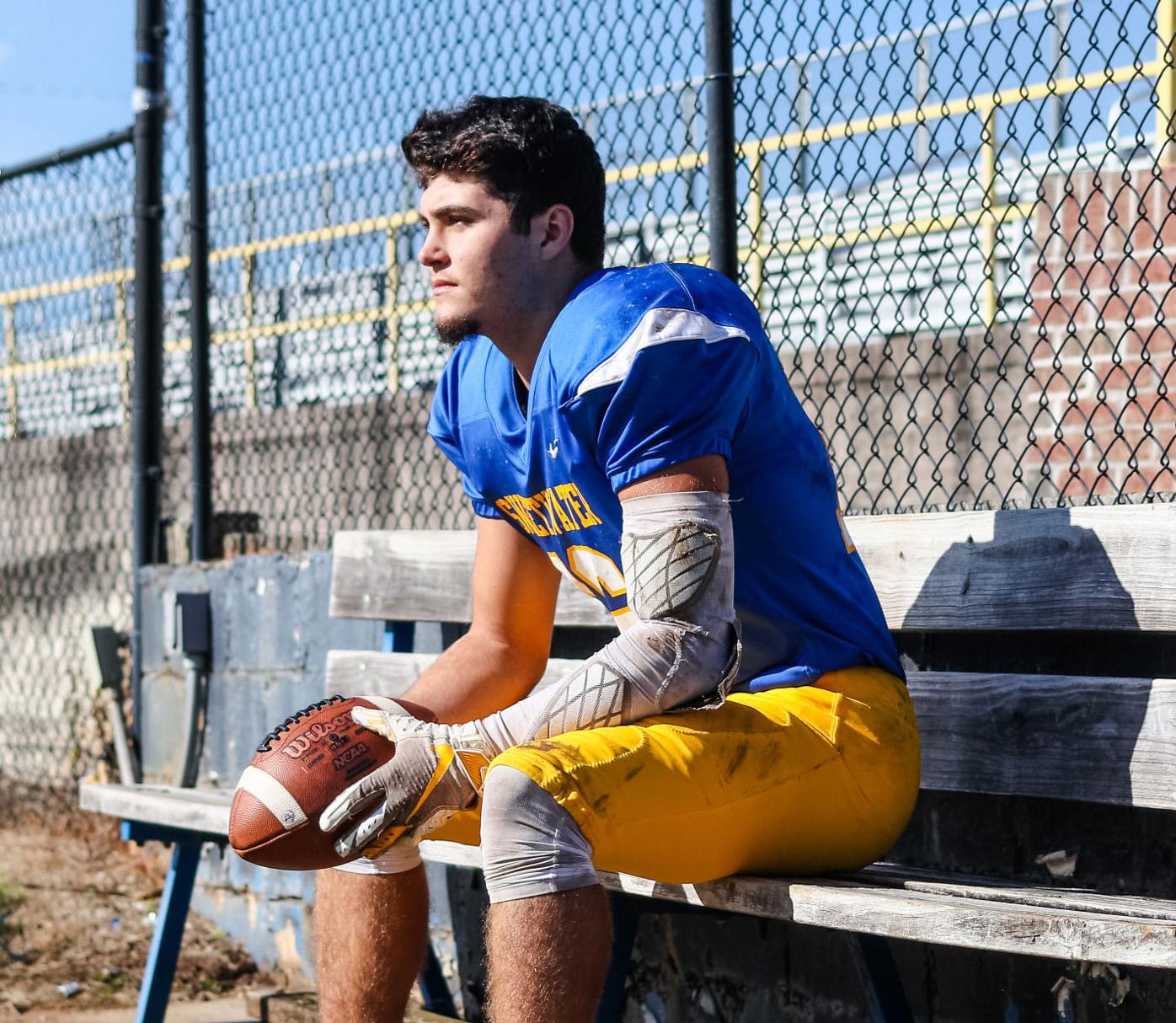 Bryce Johnson stares out onto the field following his senior season in Sweetwater. 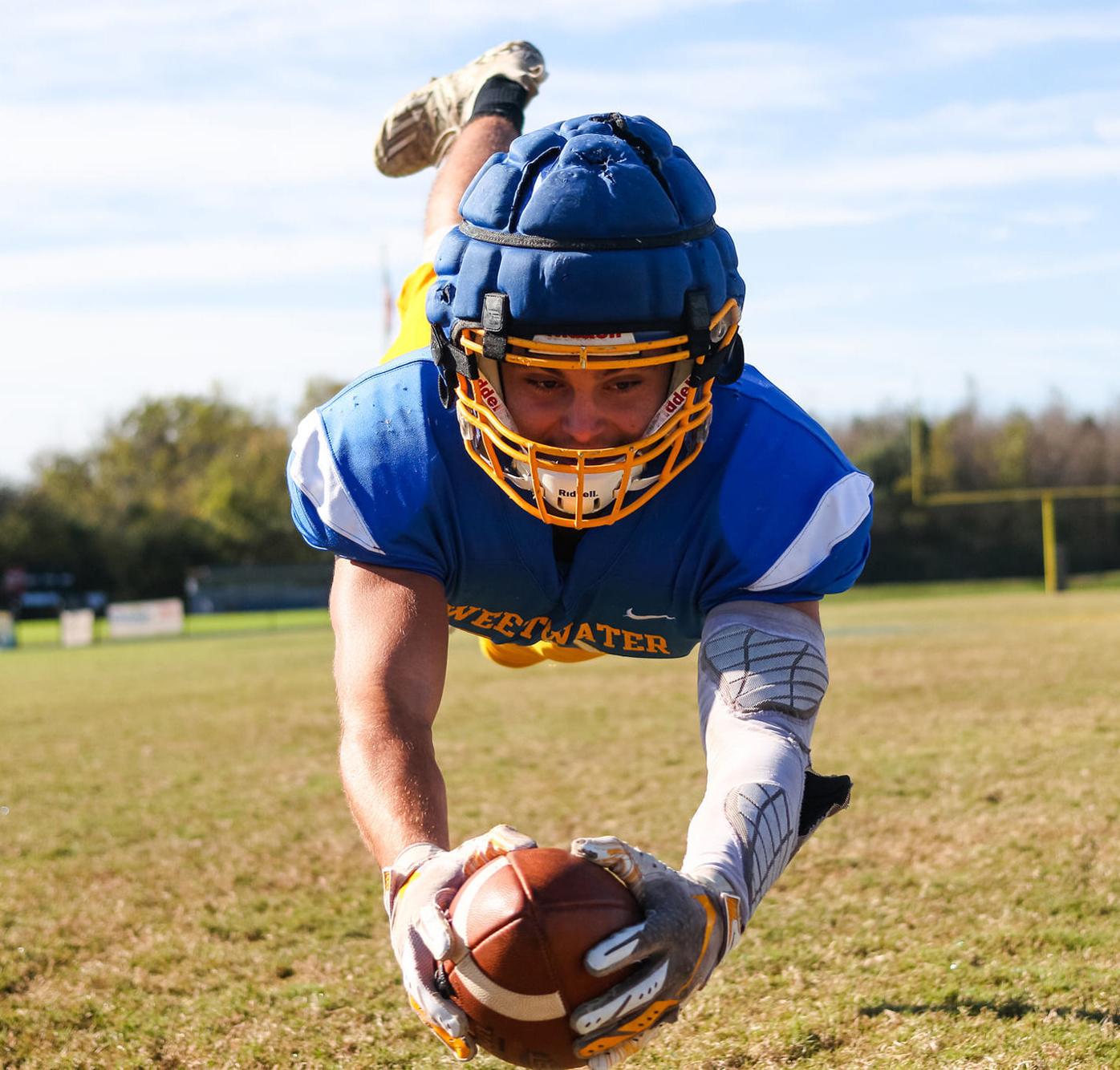 Bryce Johnson dives into the end zone following his senior season in Sweetwater.

Bryce Johnson stares out onto the field following his senior season in Sweetwater.

Bryce Johnson dives into the end zone following his senior season in Sweetwater.

Bryce Johnson has set an example.

The senior running back and linebacker put up high marks in his final season in the Sweetwater blue and gold.

The back rushed for nine touchdowns and over 800 yards through nine games. He also eclipsed over 100 tackles through his senior season — nearing an average of 13 tackles per game.

Johnson’s efforts saw him be named the Monroe County MVP by The Advocate & Democrat as well as an All-State linebacker by stateoftennesseehsfb.com

However, those postseason awards and stats accumulated will not define who he was to his teammates, to Sweetwater High School and to his coach, Mike Martin.

While there were rumors of playing football at the next level, that never seemed like the goal for Johnson. Come the fall, he will enlist in the United States Marines.

“I just want to be something like that and serve my country. I think this is the greatest country and I want to pay that back somehow,” Johnson said.

Johnson plans to enlist in September and will be taken to boot camp followed by infantry school.

Johnson has a reputation. He is not the most vocal guy out there. He may not always be the one with a thunderous voice that amplifies around the stadium and the locker room. But he knows who he is and he uses that to his advantage.

“He is very quiet,” Martin said. “Some people say how you can be a leader and be quiet, but I can tell you exactly how to do it. It is by what you do. He brought it every day and every game. I think people watched him and thought ‘if I am going to follow someone it is him.’ He was quiet, but when he talked he got your attention. He is an ideal kid to coach and I am going to miss him.”

However, Johnson is not afraid to be vocal when he needs to be. It may be a bit out of his nature, but he is the kind of guy who will do what he needs to do to make the team better.

Sweetwater fans might remember back to Oct. 23 against Tellico Plains. The Bears had just picked up a huge chunk of yards off of a blown coverage and were near the Wildcats’ goal line. It was Johnson’s voice that could be heard clear as day telling his teammates to get their heads on straight.

Johnson is a hard hitter and has built a resume to show that he is an even harder worker.

“He has got one of the best motors if not the best motor that I have ever coached. I cannot think of one time where myself or any other coach had to say anything concerning him with effort or not being ready to play,” Martin said. “I knew he was going to be a good one because he has that ‘it’ factor. He is a football player, period. You can try to break him down by possession, but he could probably play at any position probably, but he is a football player.”

Johnson had to develop into his leadership role, but when you become arguably the most impactful player on both sides of the ball for your team people will look up to you.

“I think it is good to be looked at (as a guy who leads by example.) You do not always have to be the most vocal to stand out and be an example,” Johnson said. “I tried to be a leader in practice and before games. I’ve given speeches to get everyone hyped up, so we can have a good game.”

Johnson missed nearly two full games in the middle of the season. An early ejection saw him leave the Sequoyah clash early and the suspension carried over to him missing the game at Red Bank the next weekend.

However, when he was on the field, all 21 of the other players knew his presence was there.

“It was fun playing. I didn’t really expect to get that many tackles this year with the two games I missed. I tried my hardest and my best, and just put my heart out there, and tried to do the best I can for my team,” Johnson said.

Of course, there were tough times in Sweetwater’s 2020 season. After finishing fourth in the region the year before, the Wildcats fell to 5-5 and 1-4 in Region 3-3A, missing out on the postseason.

“It was hard to swallow. Some games we should have won and times where we should have had it, but we just gave up in the end. It’s just part of it and part of the game,” Johnson said.

However, there was a time when Johnson may not have reached his senior season as a player.

“I had a real bad concussion my freshman year and was out almost all the season,” Johnson said. “That changed my demeanor a lot and how I played. It made me work harder. When you don’t get to play it shows you how much you miss it and that pushed me.”

The early injury put a year of experience and development away for Johnson. This was before Monroe County had middle school football, thus lessening already limited chances for Johnson to boost his level of play.

Johnson played three full seasons with Sweetwater, two of those were under Martin who stepped in ahead of Johnson’s junior season.

“I thought he had great leadership ability right off the bat simply by how hard he went,” Martin said. “I have an old saying that I have always said. It is that I would rather say ‘whoa’ when talking about football then ‘sic ‘em.’ If you have to try to teach them to sic ‘em in football it is pretty tough in football, but we have always had to say ‘whoa’ to him.”

Martin said seeing Johnson play was kind of like a blast from the past.

“You don’t have a lot of those anymore in football,” Martin said. “He is an old school, ‘80s guy. He grew physically in his two years. I was proud of the way he came on offensively. He really developed as a running back and he was very versatile.”

Johnson’s time on the gridiron has come to a close after being named county MVP. The senior had previously played basketball, but made the decision not to return to the court in his final year at Sweetwater.

“I just lost the heart for it. I did not want to play it anymore and I just got burnt out,” Johnson said.