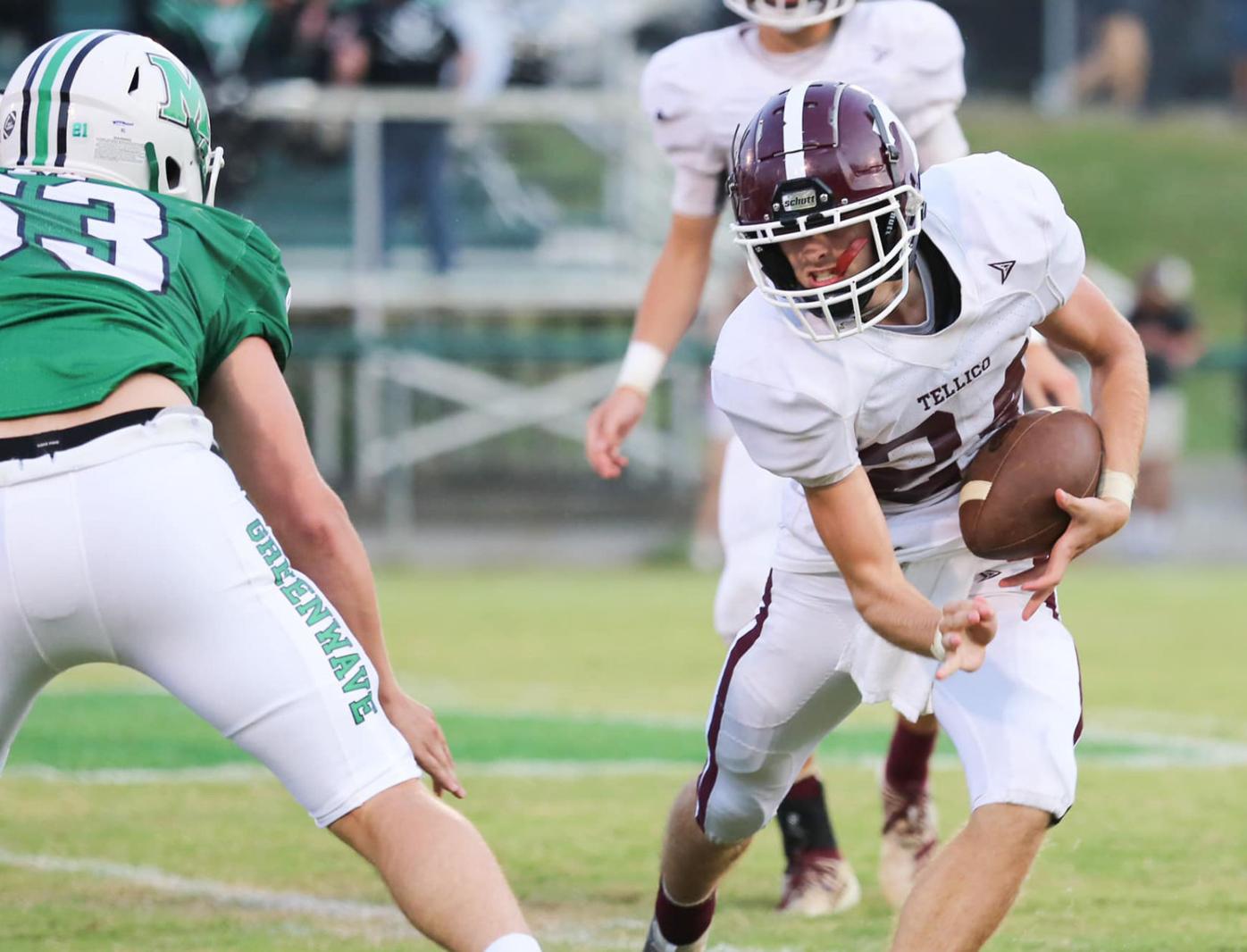 Tellico Plains’ Logan Cox (right) runs the ball in the Bears’ 23-19 loss to Midway on Sept. 10 in Kingston. 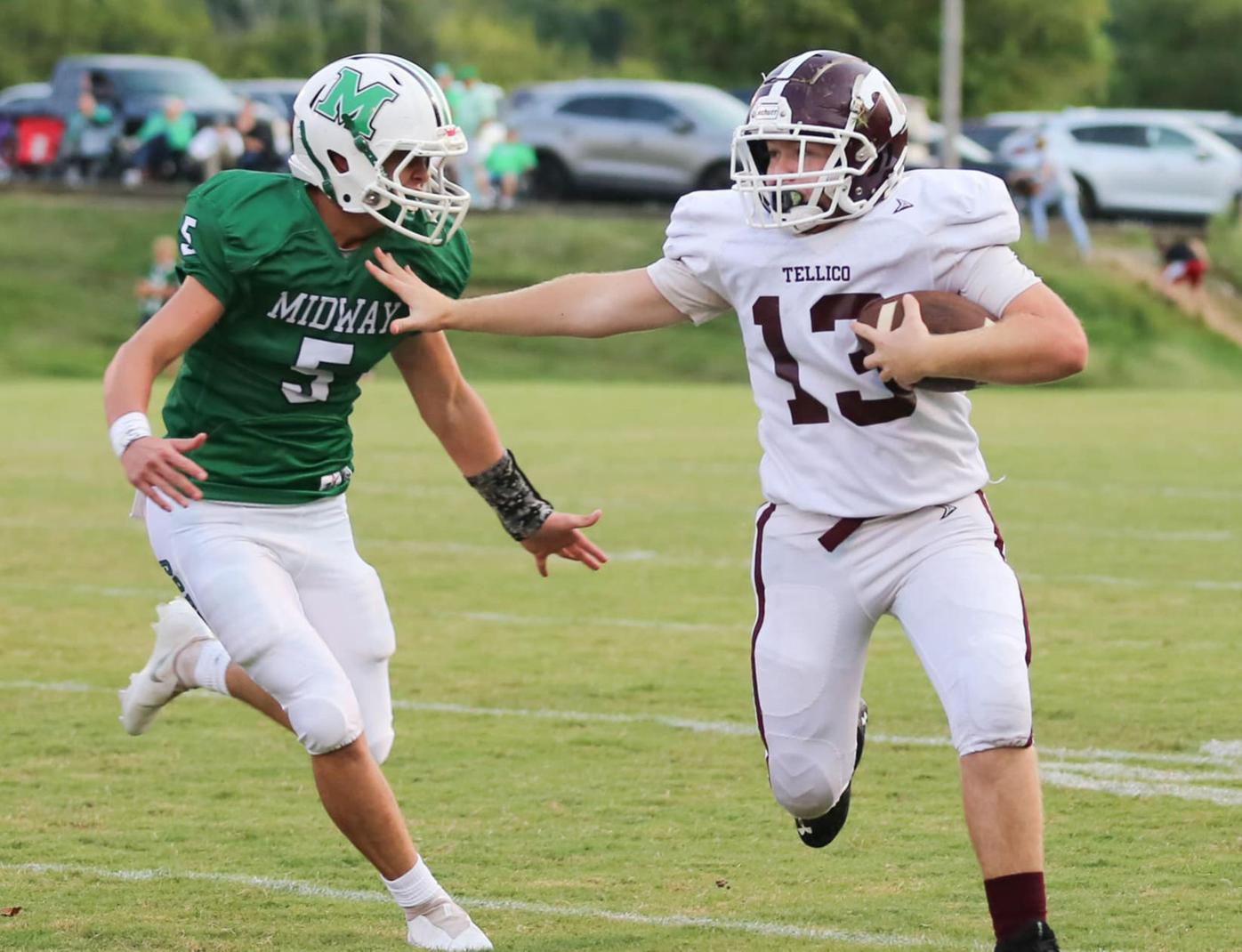 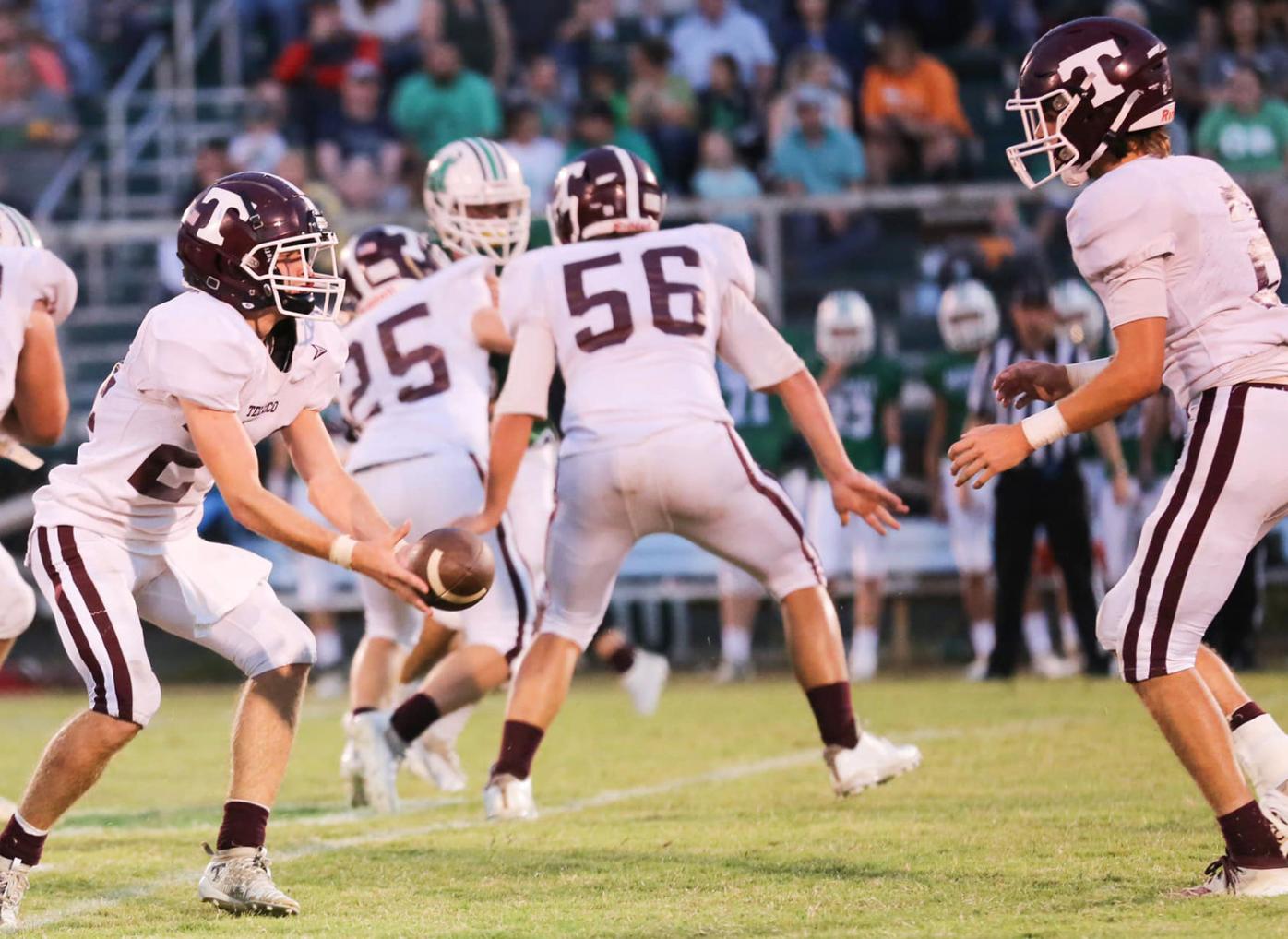 Tellico Plains’ Logan Cox (left) pitches the ball to Landon Hollinghead during the Bears’ 23-19 loss to Midway on Sept. 10 in Kingston.

Tellico Plains’ Logan Cox (right) runs the ball in the Bears’ 23-19 loss to Midway on Sept. 10 in Kingston.

Tellico Plains’ Logan Cox (left) pitches the ball to Landon Hollinghead during the Bears’ 23-19 loss to Midway on Sept. 10 in Kingston.

KINGSTON — Looking to escape on fourth down and 10, Landon Hollinghead scrambled.

The junior quarterback, still carrying an injury to his ankle from two weeks ago, was not as mobile as normal.

He cut back across the 50 looked down field, but couldn’t see anything. Keeping with their name, the Green Wave collapsed in on him.

Trent Crabtree led the squirm with a sack and the Bears turned the ball over with 1:44 to go in the contest.

As the clock barely sat above two minutes left in the fourth quarter, Midway’s Emmett Hegland capped off a 158-yard, three touchdown game with a two yard pass to a wide open Brennan Reed.

After a squib quick, the Bears were forced into their final chance at the 50-yard line. Hollinghead tossed three incompletions that nearly connected — one off the fingers of Ethan Teague and one just over the head of Logan Cox.

The Bears took a timeout ahead of third down, their final timeout of the night. Three passing plays that just went over left Tellico facing a fourth and long.

“We were just trying to calm everybody down and try to get them to make a play. Big time players make big time plays in those kinds of moments. They brought some extra pressure and we did not execute,” Tellico Plains head coach Jon Rechtorovic said. “With only one timeout left it makes it hard to run the football. If Landon was completely healthy we may have ran something else. We were just trying to put them in the best situation to make a play.”

Hollinghead never escaped from his pocket during the night, in part due to his injury.

“You can tell, he was limping around all night long. It is a twisted ankle, it is going to be sore ‘til halfway through the end of the season,” Rechtorovic said.

In a game that saw five lead changes, it was Logan Cox who struck first, bursting through a hole in the middle of the field for a 44-yard touchdown. The Bears, who struggled to score early on in their first two outings, had a lead in just 112 seconds.

Cox finished the night with 73 yards on eight carries.

They held their lead for nearly nine minutes, but Hegland’s first score of the day — a 2-yard pass to Seth Gordon — brought the hosts within one point.

Containing Hegland was no easy feat for the Bears. Coming off a junior All-State season, Midway’s shot caller continued to perform well.

“We talked about containing him all week long. He is just a good athlete. We had to try to keep him in the box and make him throw the football, but he was beating us with his legs,” Rechtorovic said. “We were doing a good job of covering stuff down field, but we were missing tackles on him. We were reaching and not running through tackles.”

Hegland’s second score of the game — a 52-yard pass to Austin Cathers — gave the Green Wave their first lead of the contest.

On the drive after Midway’s second score, Hollinghead hit Major Carter for a 35-yard gain. He connected with the senior two plays later at the 8:01 mark of the second quarter to square the score at 13.

The junior’s long of the day was his 37-yard pass that found Teague in stride. The senior then cut around multiple tacklers into the endzone — the Bears led 19-16 with four minutes left in the third quarter.

Despite Hegland combining for 264 yards, the Bears came up with crucial stops throughout the night.

A fumble set up the Green Wave at the 10-yard line. Hegland ran for five, but the Bears’ coverage forced two incompletions. Sierra Cowell tacked on a 20-yard field goal for a 16-13 halftime lead.

Coming into the second half, the Green Wave moved the ball well. Moving the ball 60 yards to first and goal at the Tellico five. A bad snap cost the hosts 10 yards — followed by an 11-yard loss from a Reid Shaw sack.

“When it gets down there to that part of the field you will always hear me yelling it is time for us to bow our neck,” Rechtorovic said. “We just needed to take care of our responsibility and to go hard and fast — we’re going to bring some pressure on some folks when it gets down there and it causes people to make mistakes.”

The Bears had another big defensive stand to start the fourth. Hegland rushed for a yard, setting up a third and goal from the one. Two penalties aided the Bears, but a sack of Hegland bought an extra 15 yards — making fourth and goal from the Tellico 26.

Tellico hosts the top ranked team in Class 2A, Meigs County (3-0), in their Region 2-3A kickoff next week.

“We just have to refocus. This one is over with — we can’t go back. Move forward. Try to regain our step in the process. We just have to keep working to get better. Some other people need to step up and help out along the way … that might have to happen,” Rechtorovic said.