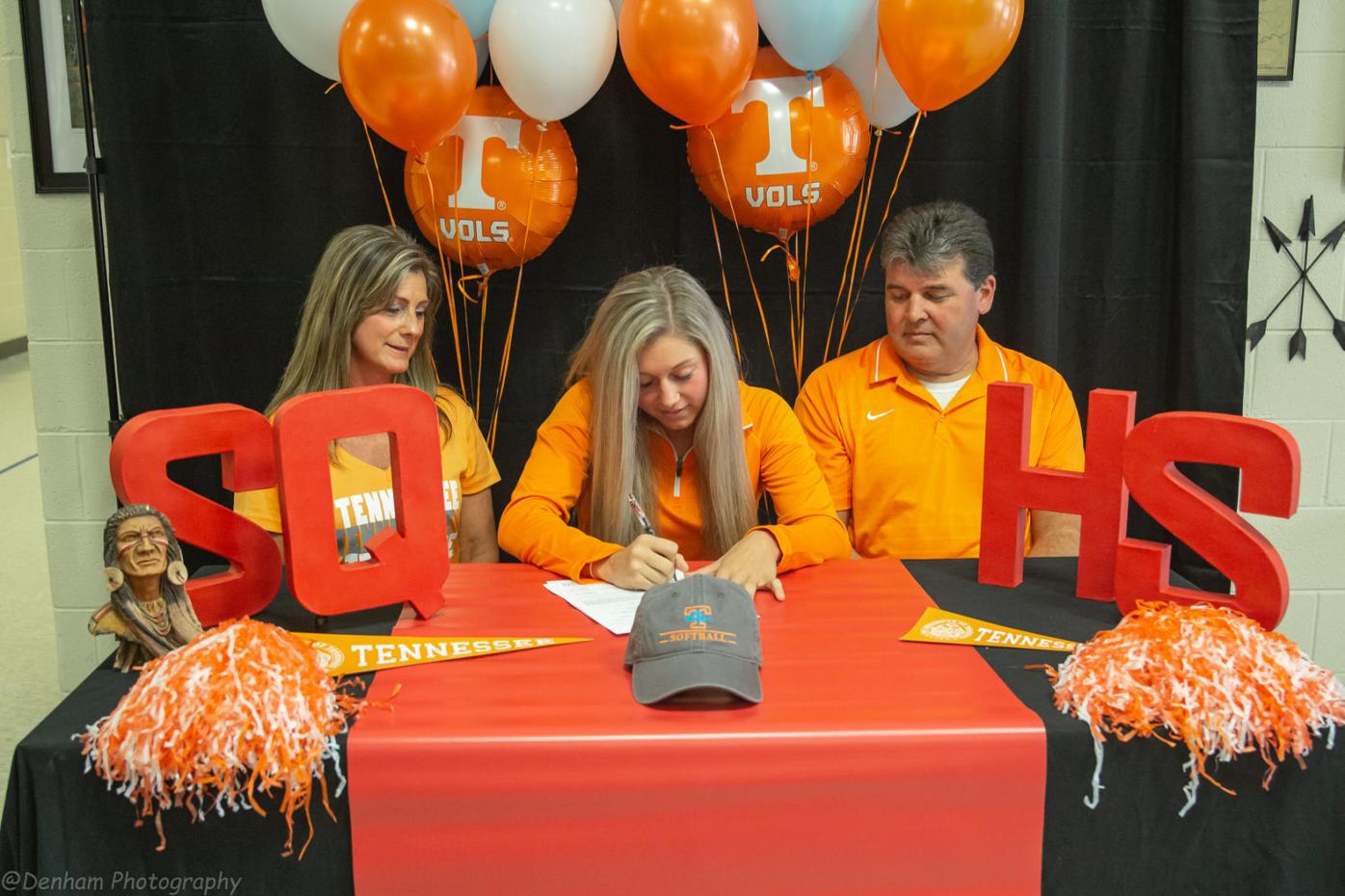 Olivia Underwood (center), alongside her parents, Candace Underwood and Daryl Underwood, signs her letter of intent to play softball at the University of Tennessee on Wednesday, Nov. 11, at Sequoyah High School in Madisonville. 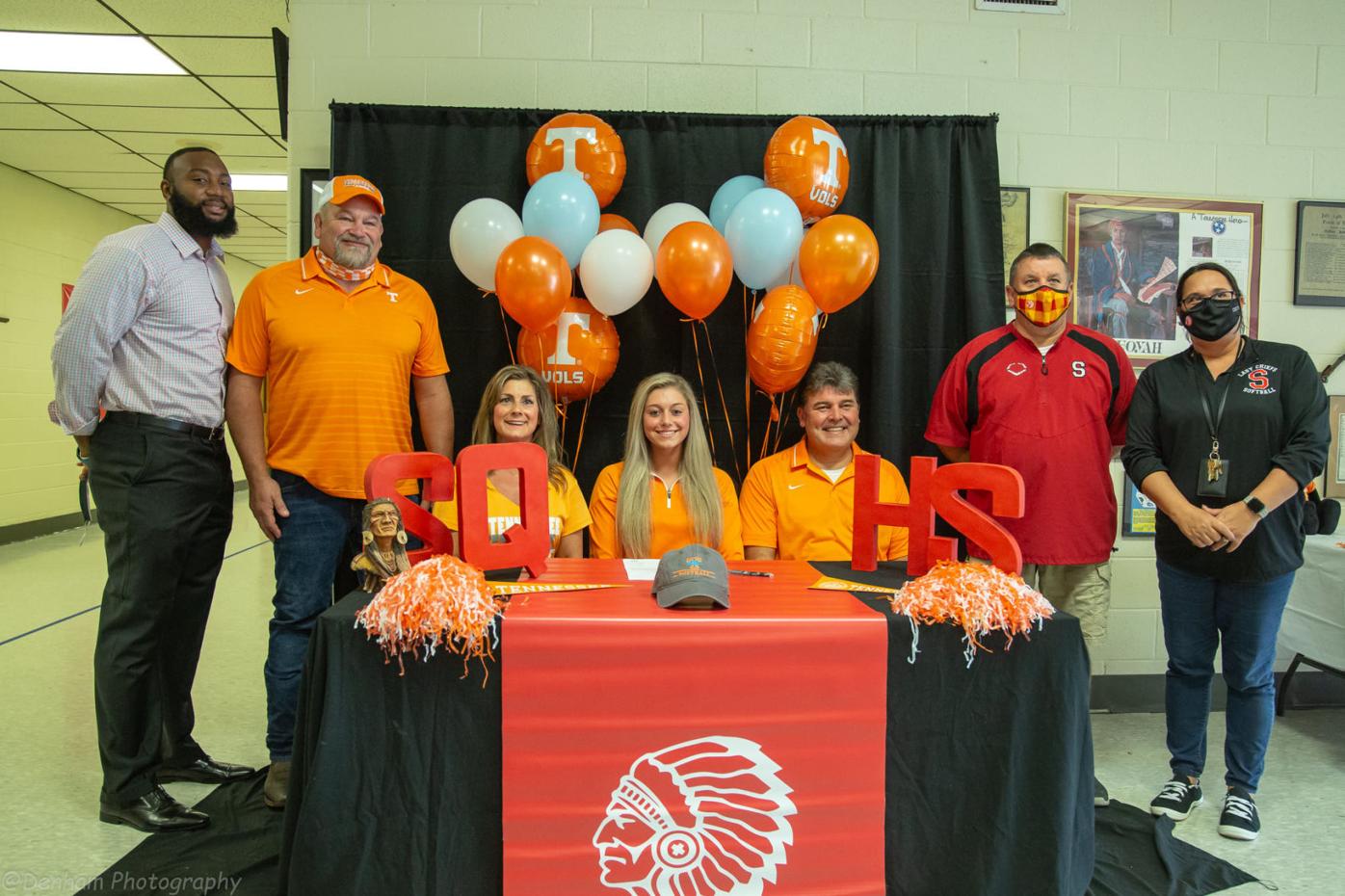 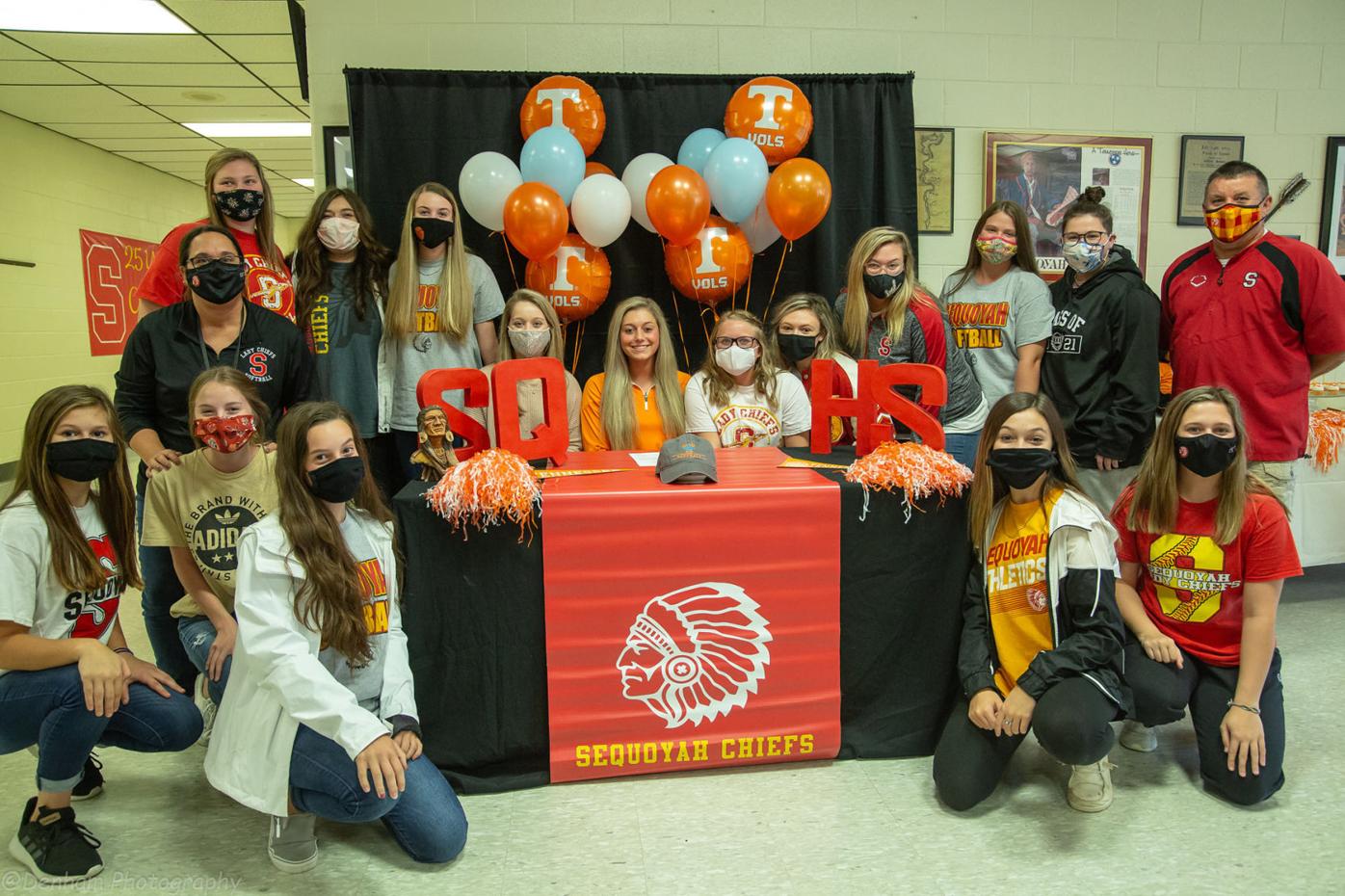 Olivia Underwood (center) poses for a photo along with the Sequoyah Lady Chiefs softball team on Wednesday, Nov. 11, at Sequoyah High School in Madisonville. 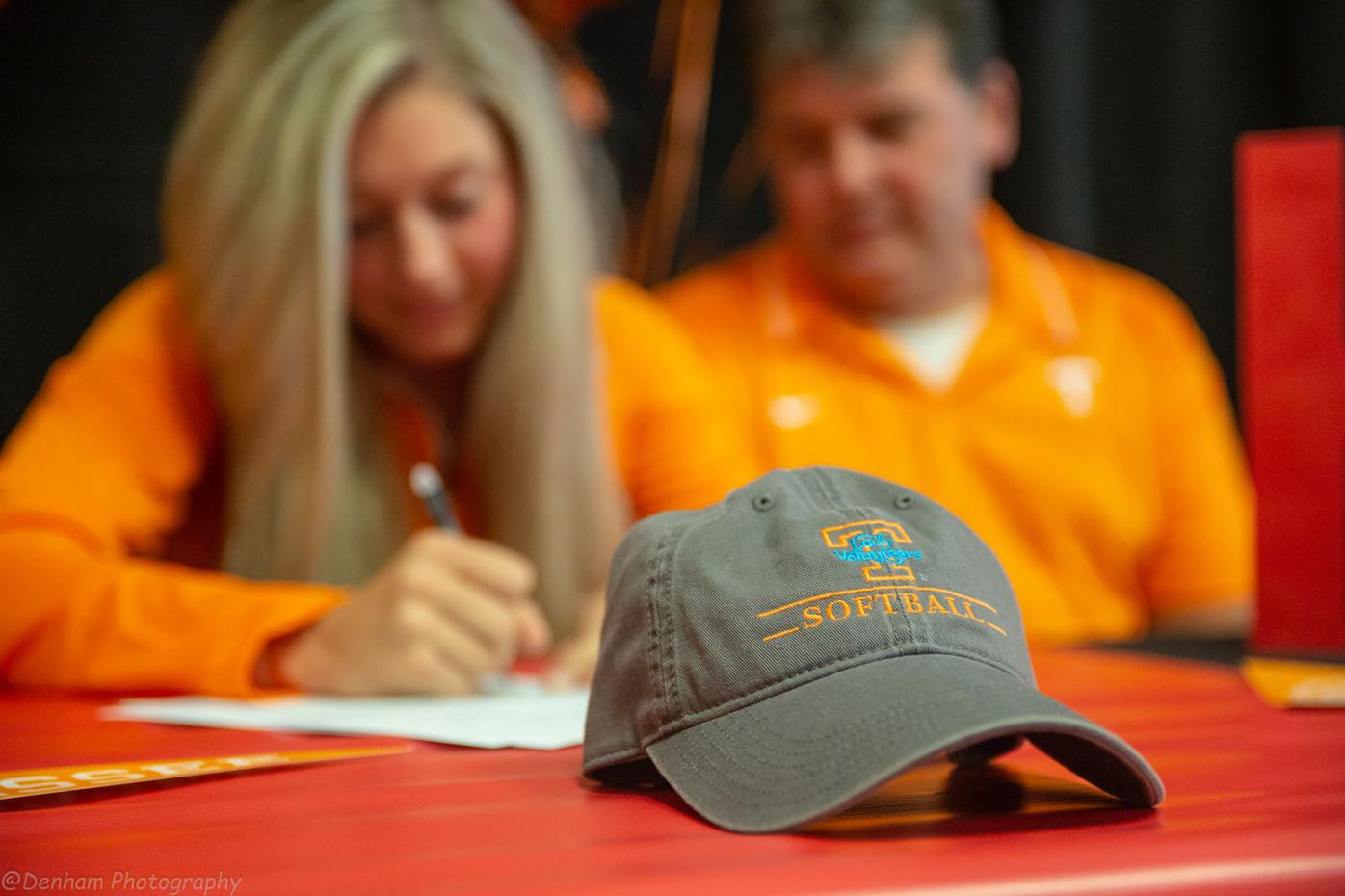 A Tennessee Vols softball hat rests on the table as Olivia Underwood, with her dad Daryl Underwood, signs her letter of intent with the Vols on Wednesday, Nov. 11, at Sequoyah High School in Madisonville.

Olivia Underwood (center), alongside her parents, Candace Underwood and Daryl Underwood, signs her letter of intent to play softball at the University of Tennessee on Wednesday, Nov. 11, at Sequoyah High School in Madisonville.

Olivia Underwood (center) poses for a photo along with the Sequoyah Lady Chiefs softball team on Wednesday, Nov. 11, at Sequoyah High School in Madisonville.

A Tennessee Vols softball hat rests on the table as Olivia Underwood, with her dad Daryl Underwood, signs her letter of intent with the Vols on Wednesday, Nov. 11, at Sequoyah High School in Madisonville.

MADISONVILLE — Olivia Underwood put into ink the realization of a lifelong dream on Wednesday.

The Sequoyah senior saw her years of effort culminate when she signed her letter of intent to play softball at the University of Tennessee at Sequoyah High School in Madisonville.

“I am beyond happy and proud of myself. I am just very excited,” Underwood said. “I grew up as a Vol fan, and as I got older and going through the recruiting process I realized that UT is were I wanted to be.”

There are a number of experiences that could have foreshadowed this day for Underwood. The senior has managed two sports throughout her high school career, softball and basketball, along with travel softball in the offseason. The juggling act kept her on her toes and moving, but did not come easy.

“It has been tough at times, especially during basketball season because I always have softball practice. It has been tough, but it will help me in the long run,” Underwood said.

Underwood knows that she could have not done it on her own though.

Her dad, Daryl Underwood, recalls late Friday nights — driving through the night while Olivia sleeps in the back of the car after basketball for a 13-hour trip to a softball tournament in Florida.

“My parents are the reason that all of this has been able to happen. Without them, I probably wouldn’t even be playing sports,” Olivia said.

But the sentiments are not just help from a paternal view. Sequoyah softball Coach Allen Roberts can look back to a game at Meigs County in Underwood’s freshman year. Meigs County, playing as back-to-back state champions, had Ashely Rogers on the mound. Rogers is now a pitcher at UT.

According to Roberts, this is the first time that a female athlete from the area has signed with the Vols in any sport.

“This is huge for our program,” Roberts said. “Any signing is big for our girls and we are so excited for them to have the opportunity to go to the next level and play softball. It is a lifelong dream for these girls. They start out and this is something that they want to achieve. To go to the flagship university in the state of Tennessee, and not just a power five school, but one of the top softball programs in the nation, to have a girl come out of our program and have that opportunity to sign with them is really big, and we’re so proud of her.”

With Underwood, UT softball is picking up a player who can get things done from the plate, and behind it as well. Underwood batted a career .600 average with 19 home runs.

“She is tenacious. She is tough,” Roberts said. “She plays hard on the offensive and defensive end. She never takes a play off and practices the way she plays. She really goes hard, she is a leader, you always hear her. She does things the right way, and you don’t have to point her in those directions, she is already heading there. She is going to come out and fight and give it everything she’s got; she is a very tough player. She is a great offensive player and a great defensive player — that is what makes her so special, is she is great all around.”

Underwood, as a freshman, was a name that most Sequoyah and area softball fans would know they could expect big things from based on her production in travel ball.

“We knew coming in she was pretty special. A lot of these girls play travel ball and we keep up with them. Her freshman year, she was already playing a high level of travel ball, but when she stepped on the team as a freshman she hit 10 homeruns and had a .609 batting average. That’s impressive,” Roberts said. “To come in and immediately put her in the three hole, it didn’t take long for her to earn a reputation. Teams did not want to pitch to her, they did not want to run on her.”

Roberts knows how hard his catcher has worked for this moment. Her skill level is undeniable, according to Roberts, but reaching this point comes from many years of long hours. Roberts remembers driving by the ball fields on Saturdays and seeing Underwood and her dad working on hitting and throwing and working on drills.

“It didn’t come by being athletic and talented, it came through a lot of hard work,” Roberts said.

Roberts, has been with Underwood through her first two seasons before the COVID-19 pandemic cut her junior season short. Roberts has seen over multiple seasons the level of talent that he has on his team.

“You run across some great players who are good on one side or the other, but Olivia is a shutdown catcher that can really affect a ballgame. Offensively, she is something else. She brings a lot to the table. She is a great kid, with a great work ethic,” Roberts said.

While it is only November, the TSSAA has not alluded at any idea of postponing the spring sports window like it was last year.