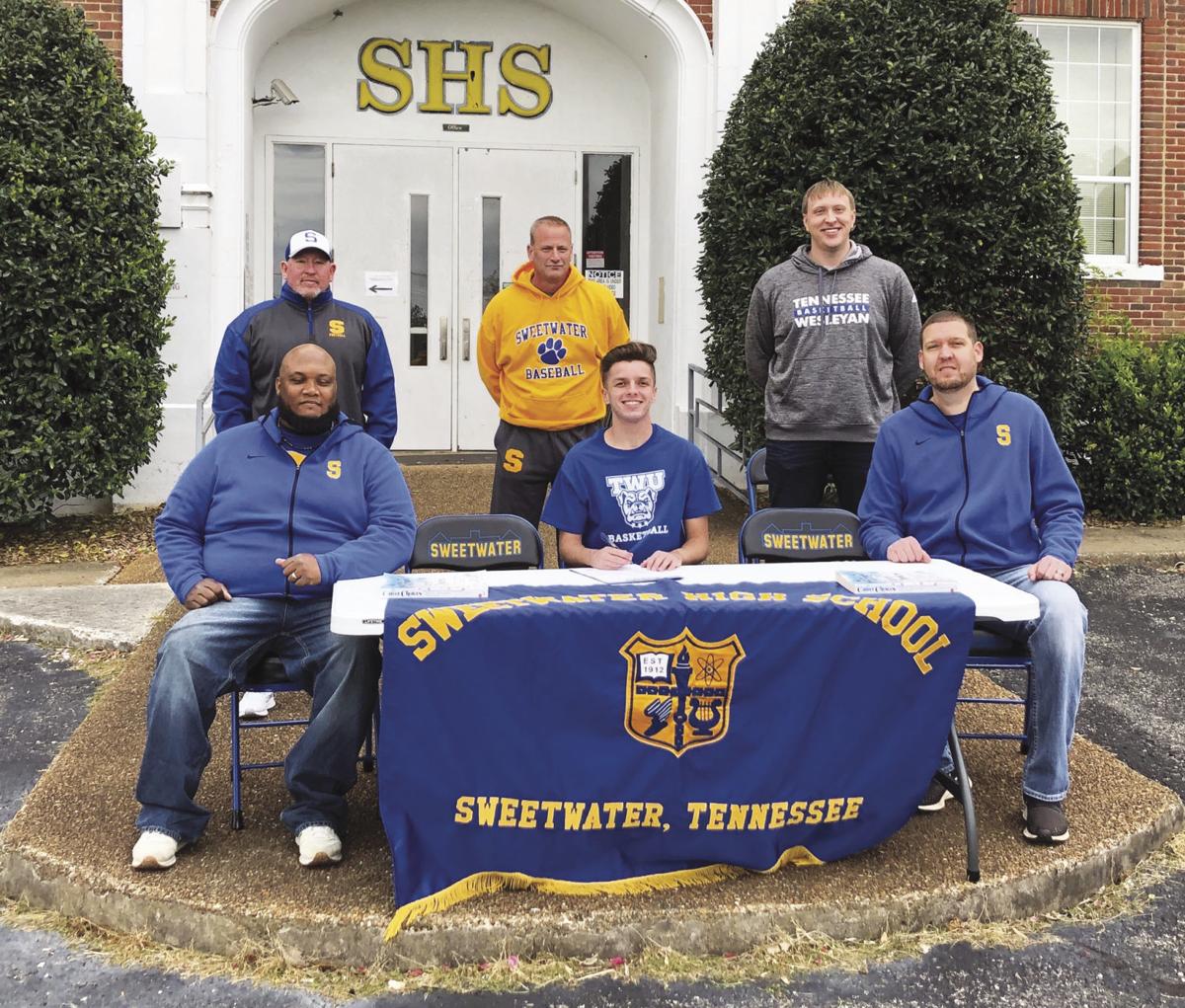 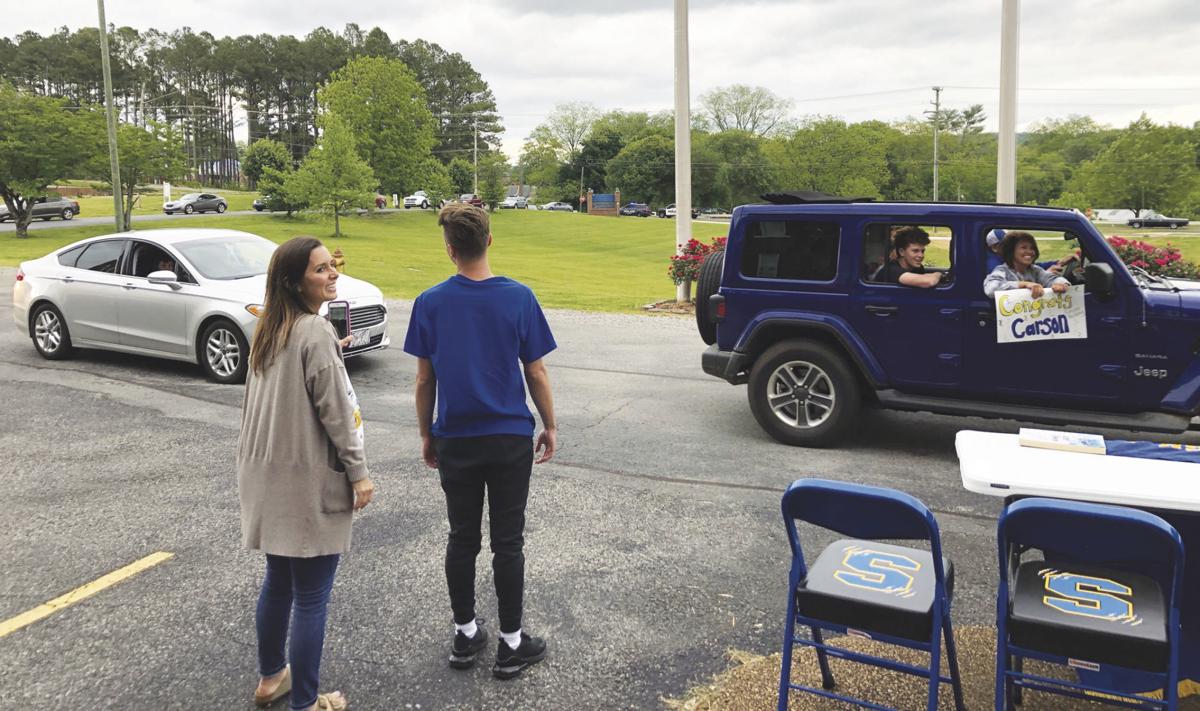 Sweetwater players, fans and community members congratulate Carson Hicks on signing with the Tennessee Wesleyan University men’s basketball program with a vehicle procession on May 6.

Sweetwater players, fans and community members congratulate Carson Hicks on signing with the Tennessee Wesleyan University men’s basketball program with a vehicle procession on May 6.

The Sweetwater senior had just officially signed with the Tennessee Wesleyan University men’s basketball program Wednesday, sitting at a makeshift signing table in front of the school. His family, friends and school administrators were there, too.

But the festivities had come to a halt, and people around him were starting to stall. He wondered why they halfheartedly requested more pictures, since there had already been plenty taken.

Led by a police car with sirens blazing, a long procession of vehicles made its way around the loop in front of the school. Some featured passengers holding signs of congratulations, while others had teammates waving and cheering.

This was for Hicks, a celebration of his signing amidst social distancing precautions due to the COVID-19 pandemic. It had been organized by Sweetwater head boys basketball coach Jeremy Henderson, and Hicks couldn’t believe it.

“It’s just awesome,” Hicks said. “Not even just my teammates. Past coaches, family, just other friends. It’s awesome. We’re just a brotherhood here. It meant a lot. Brought me to tears a little.”

Putting the plan together

It took a lot of planning on Henderson’s part to make everything come together.

He wanted to make sure Hicks’ signing was celebrated; the point guard had been more than a key member of Henderson’s team since he took over two seasons ago.

“(Hicks has) given everything … Carson had to overcome adversity with the knee (injury),” Henderson said. “He missed his entire sophomore year and set him back. He had a good, solid junior year, but you could tell he wasn’t quite himself. You could tell he didn’t trust the knee.

“This offseason, when we got out of it, got back in the weight room, you could see the confidence grow in the knee and you could just see him rise, daily. I knew he was going to have a really big year for us coming in just because of all the work that he put in to earn that.”

Since it wasn’t able to be held inside the school like normal, the signing was originally scheduled to take place at Hicks’ house. The advantages of holding it outside, where people could space out, though, eventually won over.

And as Henderson mulled it over, he figured out a way to include the teammates and community that mean so much to his veteran leader.

“Once Coach (Mike) Martin and Coach (Eric) Weaver were able to get approval for us to do this here this week, outside here, I just tried to think outside the box,” Henderson said. “The bowl here kind of makes a perfect loop.”

The hardest part for Henderson was keeping the surprise secret. He didn’t invite anyone to the procession until the day before the signing. Officers Anthony Dupree and Daniel Johnson, and the Sweetwater Police Department as a whole, helped out to provide the escort.

Henderson was more than appreciative.

“It just says a lot about this community,” Henderson said. “I’ll tell you all the time how special this place is.”

Get to know the Wisconsin Badgers' 2020 football recruiting class

Hicks signed with TWU Wednesday evening. He didn’t know about the procession before he saw it and was immediately grateful for the efforts his coach went to in order to ensure he was properly celebrated.

“(Henderson is) the best coach I could ever ask for,” Hicks said. “He’s always organized. He goes above and beyond for us. He’s a players’ coach, and I love him.”

What initially appeared to be a small gathering turned into a large-scale, yet safe event. The Sweetwater community was able to celebrate one of its own while still adhering to social distancing guidelines.

It was all worth it for Henderson.

“I’ll miss that kid,” Henderson said. “I hope that was really special because he’s a special young man and we love all our guys here. It’s a brotherhood. I think you got a little bit of a glimpse with what the brotherhood’s like with the turnout we just had for that, with most of that being current players and former players. We just support each other.”

What attracted TWU to Hicks was his work ethic and drive on the court.

“It’s a misconception, people say, ‘Well, they play hard,’” TWU assistant coach John Ferguson said. “But when you watch Carson play, he really fits the bill of just a hardnosed, tenacious competitor. And that’s really what we’re looking for.

“We want somebody that can be a leader at the guard position and someone that will defensively play their butt off the whole game. So that’s kind of what stuck out for us.”

Hicks had other options on the table, but a big plus for TWU was that his former teammates, Dominique Oggs, Kobe Billingsley and Matthew Kile, currently play there. He’d even been communicating with them about it through a group chat.

“That’s always been a dream of ours because we’ve hooped since we were tiny,” Hicks said. “So we’ve always wanted to play college ball together. When we could make it happen, we made it happen.”

Its closeness to his home and the relationships he forged with TWU’s coaches also played a big role.

“It just seemed like the right fit,” Hicks said.

Now, the focus turns to the college game.

“Just (excited about) expanding my game,” Hicks said. “As I’ve been hooping with other college players, they’re on a whole other level. And I just want to get to that level and eventually play with my old teammates. And get out there, have fun with them and just get the full experience.”

As he moves on to TWU, though, don’t expect Hicks to forget about what the Wildcats’ players, fans and community did for him as he closed a chapter of his life.

“It was awesome,” Hicks said.