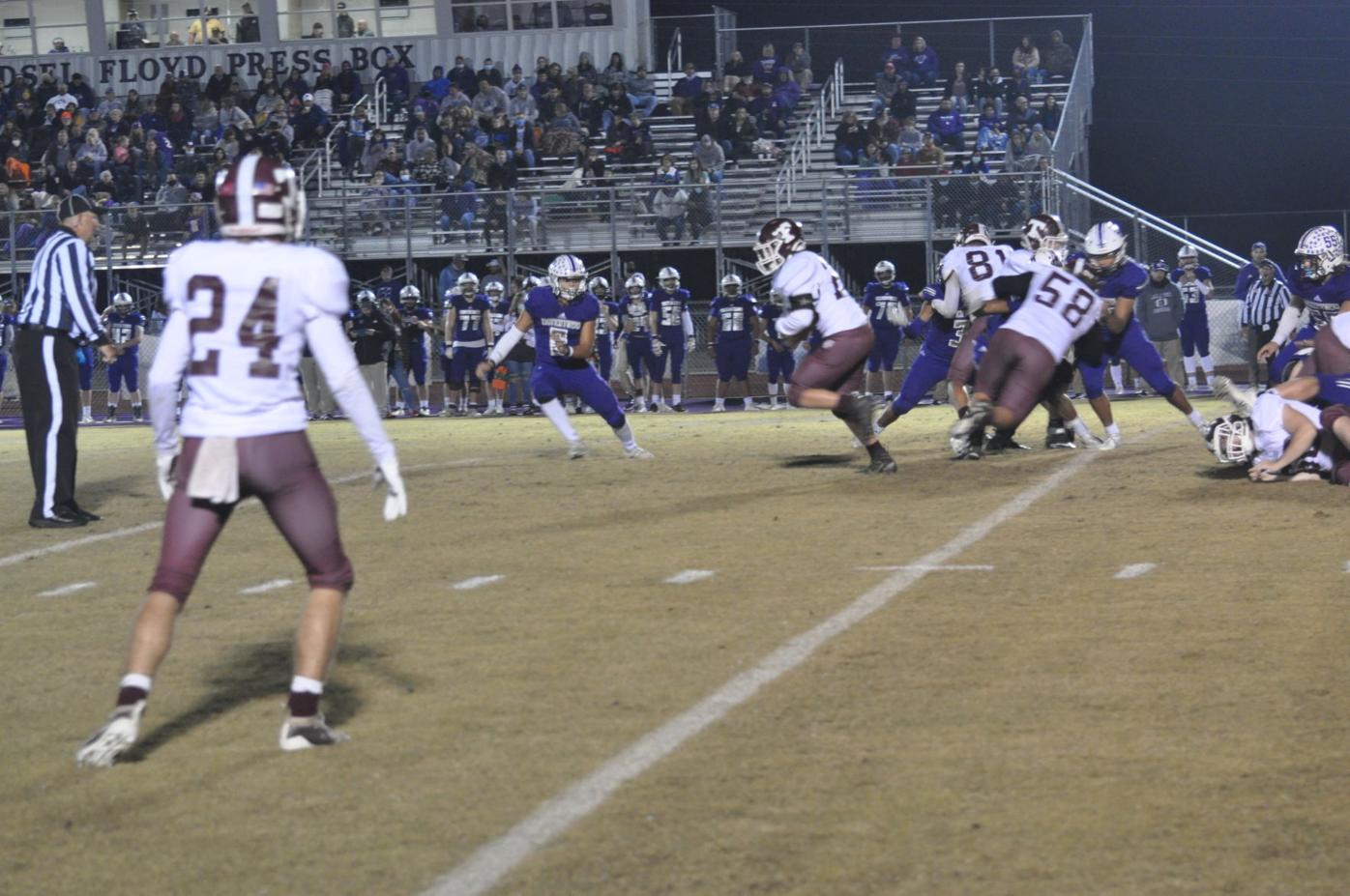 Kaleb Moore (center) runs the ball for Tellico Plains in the Bears’ 63-14 loss in the Class 2A State Playoffs First Round on Friday at Watertown. 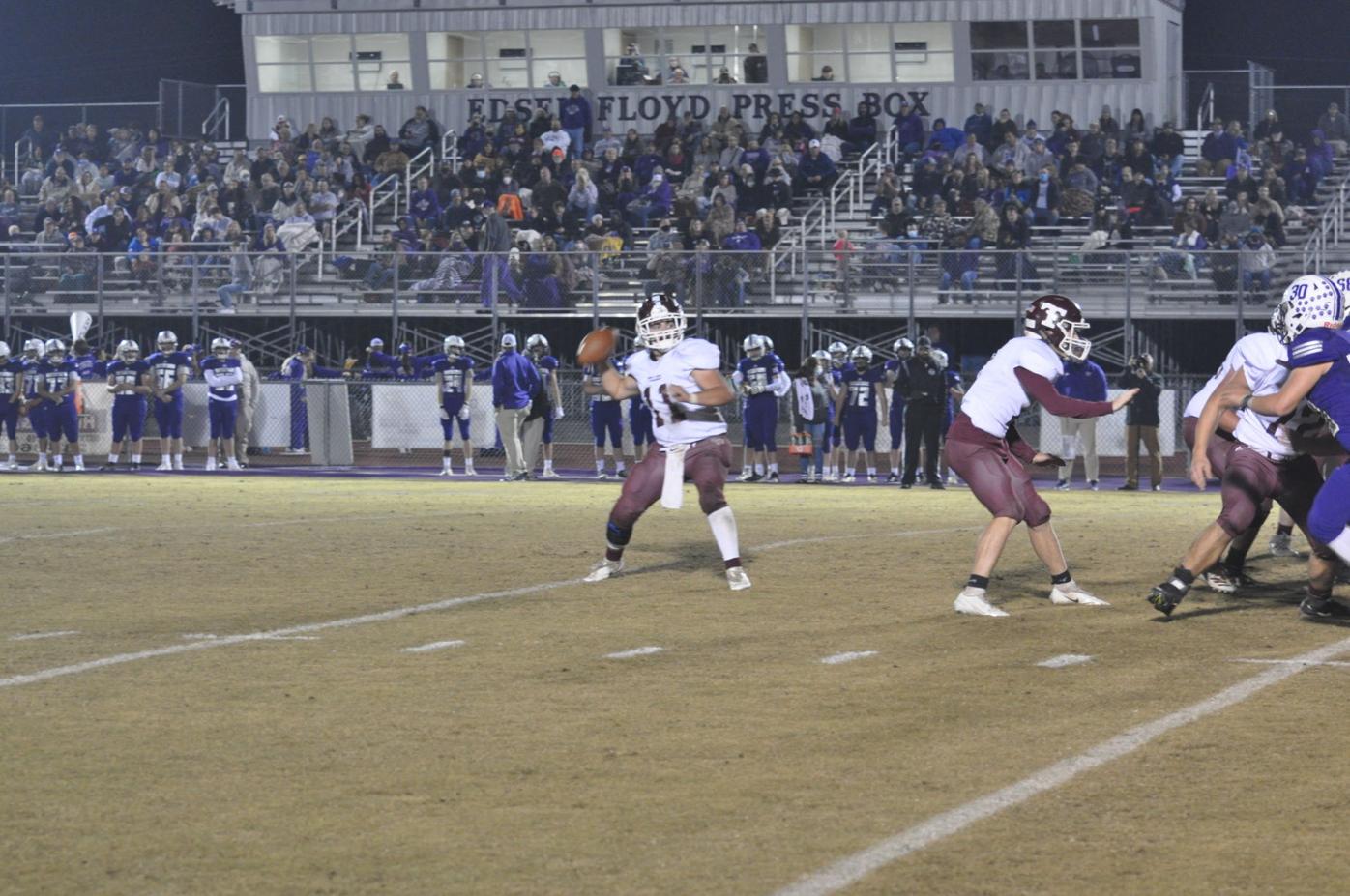 Reid Shaw (11) throws a pass for the Bears in their 63-14 loss in the Class 2A State Playoffs First Round on Friday at Watertown. 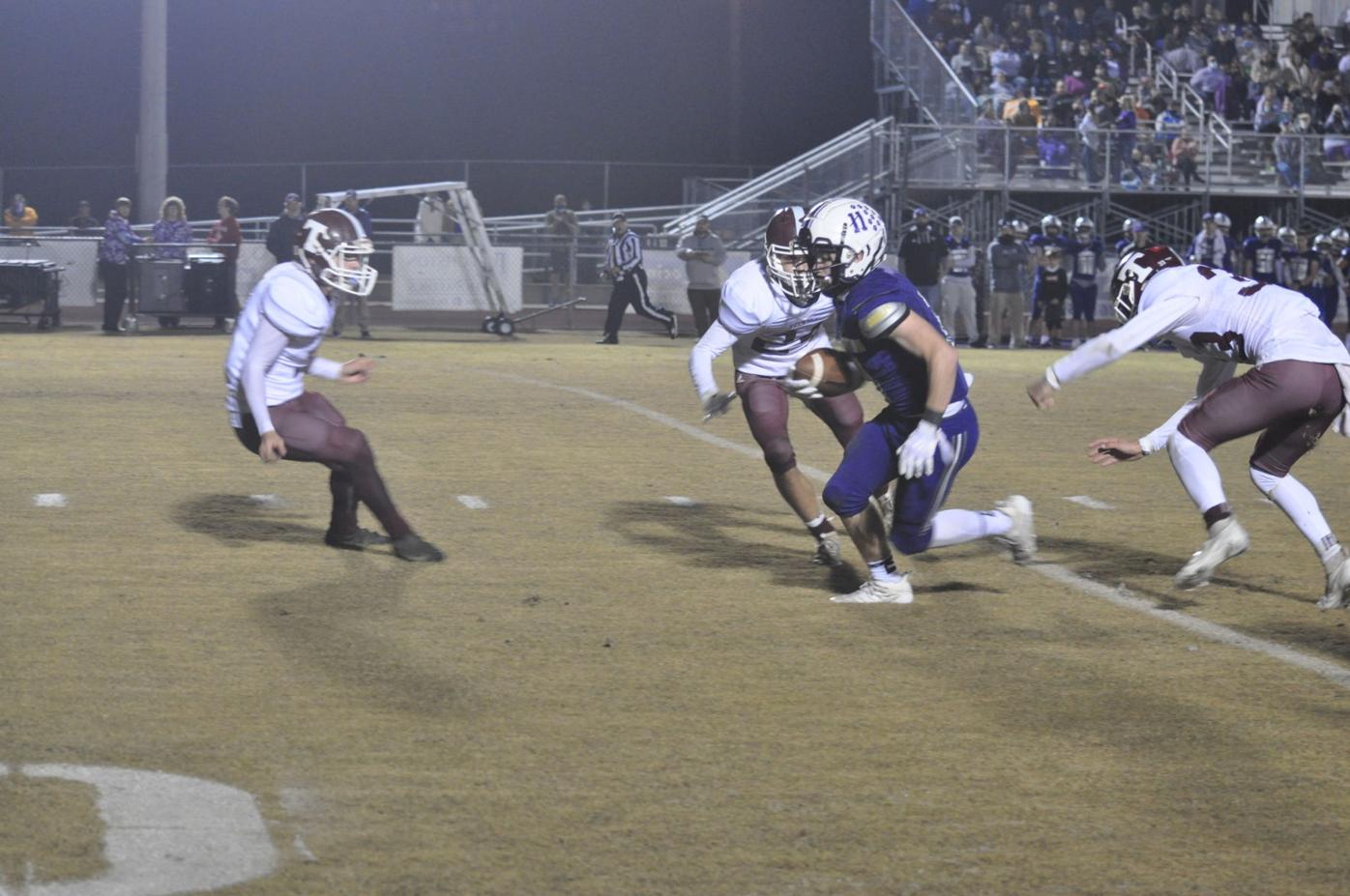 Logan Cox (center) and two other Bears close in for a tackle on Watertown’s Isaac Finch in Tellico Plains 63-14 loss in the Class 2A State Playoffs First Round on Friday at Watertown. 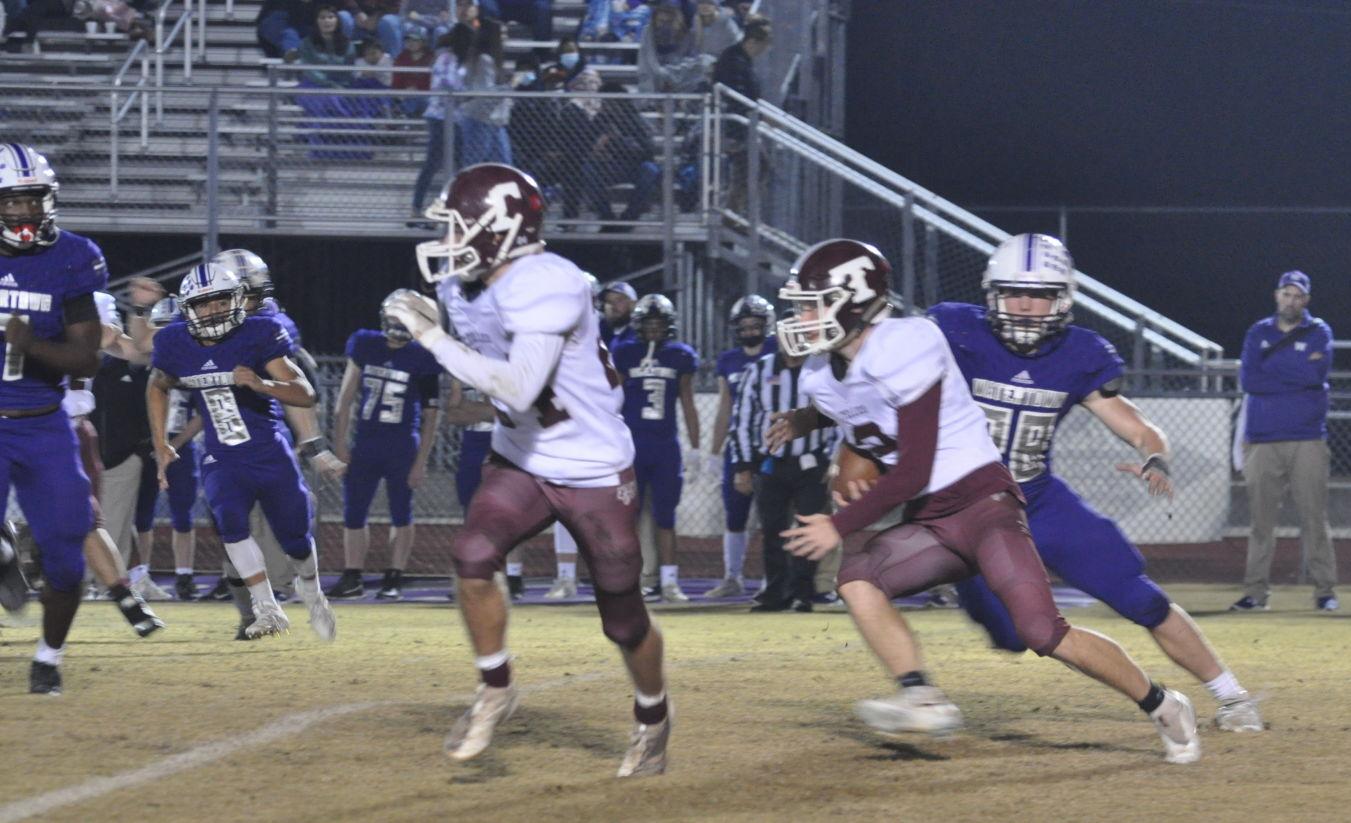 Marshall Dukes (right) runs the ball behind a Logan Cox block in Tellico Plains 63-14 loss in the Class 2A State Playoffs First Round on Friday at Watertown.

Kaleb Moore (center) runs the ball for Tellico Plains in the Bears’ 63-14 loss in the Class 2A State Playoffs First Round on Friday at Watertown.

Reid Shaw (11) throws a pass for the Bears in their 63-14 loss in the Class 2A State Playoffs First Round on Friday at Watertown.

Logan Cox (center) and two other Bears close in for a tackle on Watertown’s Isaac Finch in Tellico Plains 63-14 loss in the Class 2A State Playoffs First Round on Friday at Watertown.

Marshall Dukes (right) runs the ball behind a Logan Cox block in Tellico Plains 63-14 loss in the Class 2A State Playoffs First Round on Friday at Watertown.

WATERTOWN — Tellico Plains’ football season came to a close Friday night when the Bears visited Watertown in the TSSAA Class 2A First Round. The Purple Tigers’ (10-1) size and speed became too much for the Bears to contend with, jumping out to an early multi-score lead in a 63-14 rout.

The Bears (4-7) had a similar fate last season when they made the 177-mile drive to Watertown, falling 47-8 in the 2019 Class 2A First Round. However, Tellico Plains sustained two long-scoring drives in the second quarter, a sign of the progress that Tellico Plains head coach Jon Rechtorovic and his program have put in.

“Back to back years with a team that had not been in the playoffs before that shows we are making steps and strides,” Rechtorovic said. “This isn’t where my vision ends right here, I have big things for this team. We got to hit it hard in the weight room and keep working to get faster, so we can look like some of those dudes over there. They got some big dudes.”

The Purple Tigers are the fourth-ranked team in Class 2A, per the Associated Press, and have reached two straight quarterfinals. For Tellico Plains, the Bears are still working on their upswing and finding their identity in their second season under Rechtorovic.

The Bears, prior to Rechtorovic’s hire, had two postseason appearances in 16 years. Rechtorovic has matched that feat in two seasons. Tellico Plains’ turnaround in two seasons has shown capabilities of playing with bigger teams and bigger schools, citing their one possession defeats by Sweetwater and Midway.

“Our big thing is to get better everyday,” Rechtorovic said. “Our goal when we go out on the practice field and when we do weight room or agilities is find ways to get better. Making it to the second round or having home playoff games are things that we strive for as a team and some day we are going to reach them.”

However, the Bears still have a row to hoe ahead of them. Tellico Plains could not match the size of Watertown on the field. The Purple Tigers were able to hurt Tellico Plains on the run game, and then sling in passes from Brayden Cousino to move the ball. Tellico had struggled generating much on offense given the push off of Watertown’s defensive line.

Watertown 63, Tellico Plains 14: Watertown got on the board early, in just over two minutes the Purple Tigers marched 58 yards to the end zone through six plays — capped off by a 14-yard touchdown run by Jordan Cason.

Cason caused fits for Tellico Plains throughout the night — rushing for 154 yards and three touchdowns. However, Major Carter got the better of Cason on a first and goal attempt from the three-yard line hitting him for a loss of six.

Two of Cason’s three scores came in the first quarter, padding a 28-0 lead after the first eight minutes. Cason rushed for this third touchdown — a 47-yard score — early into the second quarter.

Freshman watch: LB Henrich's versatility will be handy down the stretch

Badgers notebook: Off week a chance to regroup for stretch run of season

A minute later, the Bears got on the scoreboard. Marshall Dukes broke free through the middle behind a pair of blocks and went 63 yards to the house. The Bears did their most effective work on the ground, though quarterback Landon Hollinghead was sidelined with an ACL tear he got in Wednesday’s practice. Junior Reid Shaw stepped in as quarterback, rarely throwing the ball (four completions on 11 attempts) but showing his mobility — picking up 27 yards on short yardage attempts throughout the night.

Watertown seemed to respond at the apparent end of Tellico Plains’ ensuing drive — returning the punt for a touchdown, but a foul against the Purple Tigers gave the Bears a new set of downs.

Logan Cox capped off an 8-play, 54-yard drive with a 17-yard run through the middle of the field. Cox rushed for 21 yards on five attempts while Dukes led the Bears with 71 yards on three carries.

“We try to be balanced and keep them guessing. We popped a couple runs and caught a couple passes, it was just playing Bear football,” Rechtorovic said. “We were trying to change up formations and motions and run the ball where they ain’t.”

Watertown was able to move the ball through the air as well, however, spelling issues for Tellico across the field. Cousino threw for 177 yards and five touchdowns. All touchdowns were hauled in by the Purple Tigers’ Quanterrious Malone, who finished with 57 yards.

The Bears’ defense in the second half slowed down Watertown — limiting the hosts to a scoreless third quarter, but the night showed that there is still progress to be made for a young Bears team.

“I am always proud of our kids and we don’t go down without a fight. They knew that the Bears were here tonight and that is all I can ask for. Play every down and have some fun while we do it,” Rechtorovic said.

The Bears’ senior class totals at 11 students. Amongst those include Dukes — who scored the opening Tellico Plains touchdown — and Chase “Diesel” Hunt, a captain and integral member of the lineman core.

“Diesel, Dukes, Gaige Fairbanks, and our offensive line took us two years into the playoffs. They built the foundation which we hope to build in from there. They got to the playoffs twice and built or foundation, and that is all you can ask from there,” Rechtorovic said.

Class 2A — First Round