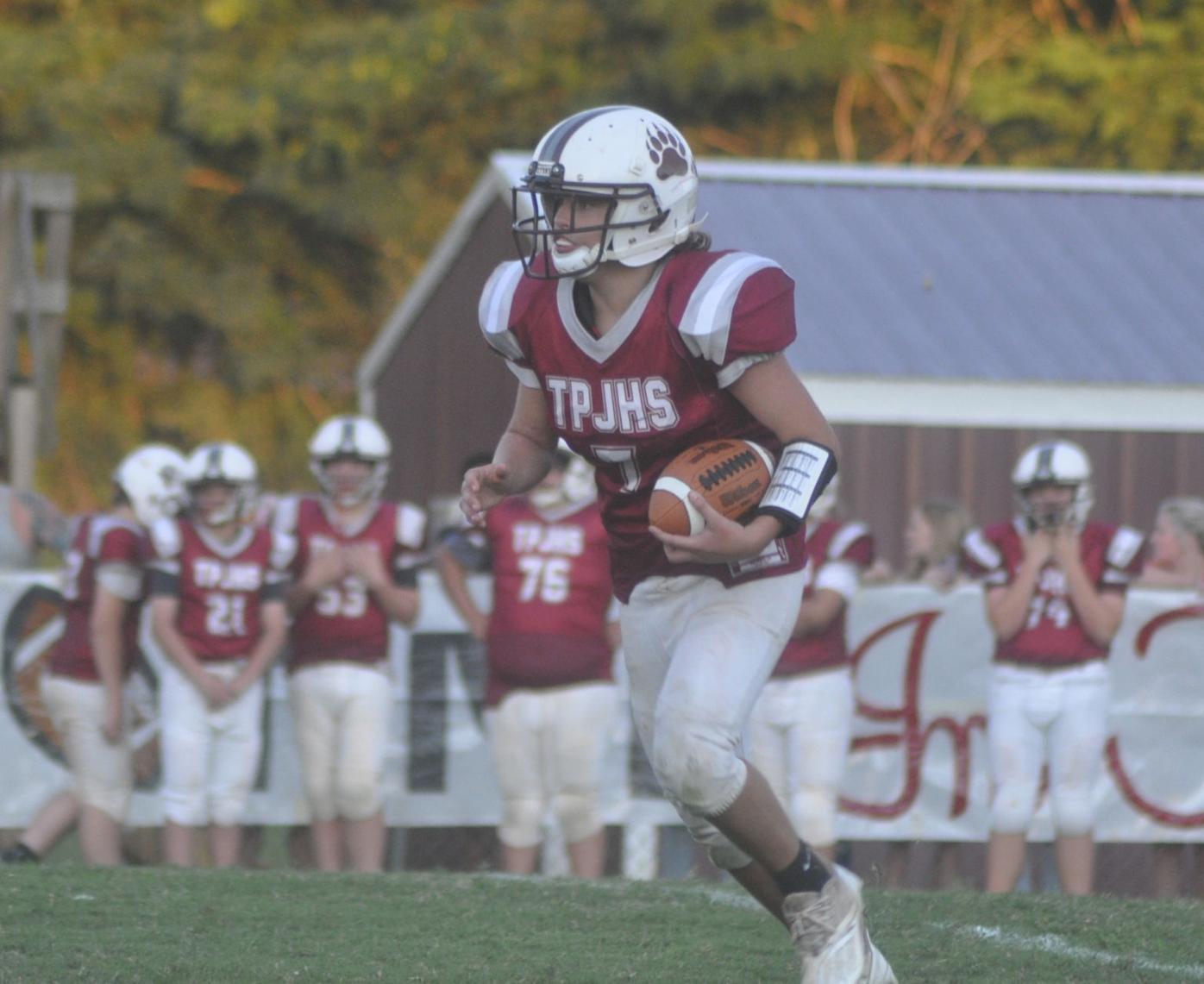 The Junior Bears’ Isaac Hollinghead runs the ball during a 12-6 overtime win over the Junior Chiefs on Sept. 9 in Tellico Plains. 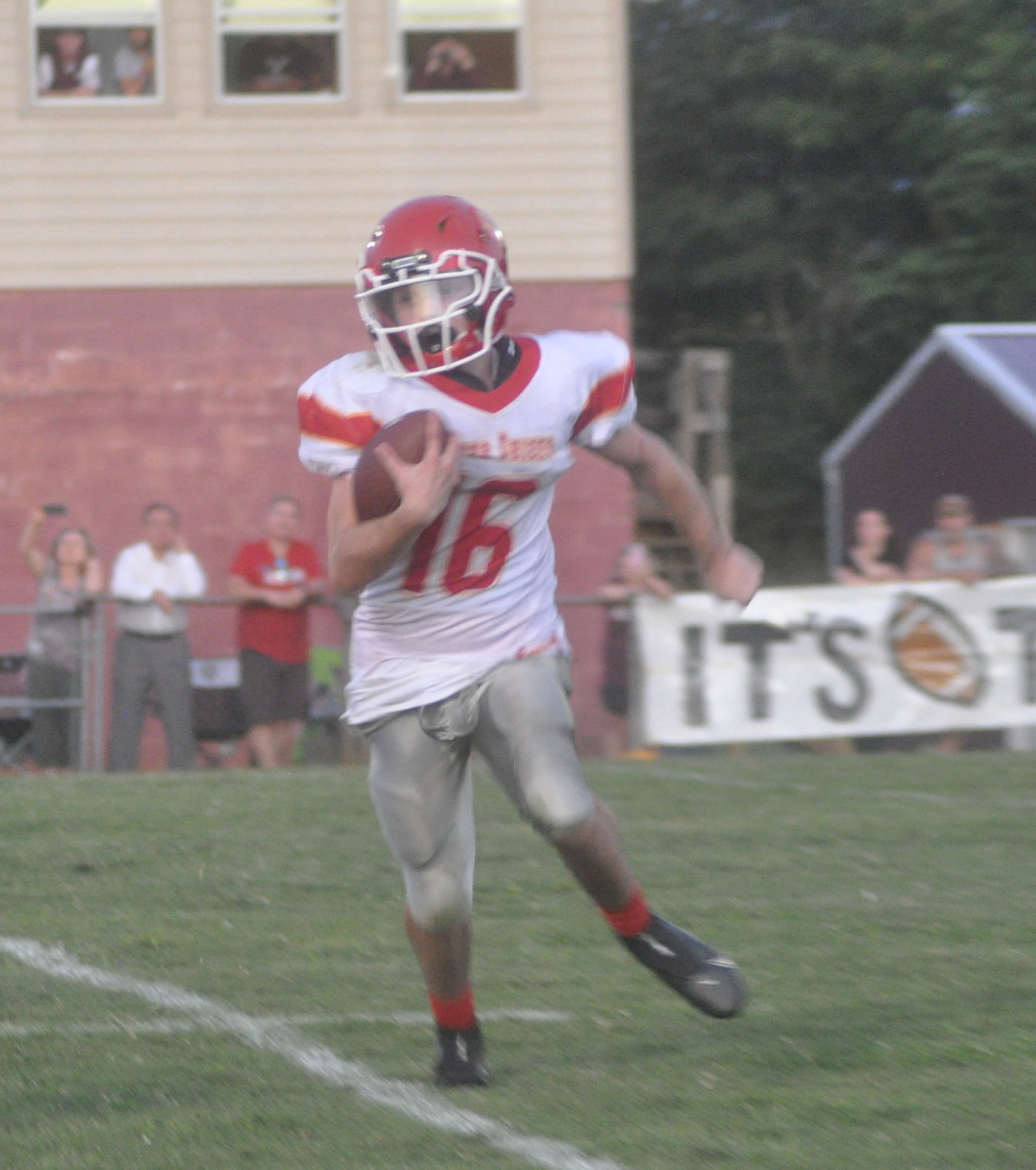 The Junior Chiefs’ Shane Sloan runs the ball during a 12-6 overtime loss to the Junior Bears on Sept. 9 in Tellico Plains.

The Junior Bears’ Isaac Hollinghead runs the ball during a 12-6 overtime win over the Junior Chiefs on Sept. 9 in Tellico Plains.

The Junior Chiefs’ Shane Sloan runs the ball during a 12-6 overtime loss to the Junior Bears on Sept. 9 in Tellico Plains.

TELLICO PLAINS — On second down in overtime, Isaac Hollinghead ran the ball up the gut.

Junior Bears head coach Josh Mullinax fell to his knees in prayer on the sideline. Hollinghead carried the ball across the goal line, cementing a come-from-behind 12-6 win over the Junior Chiefs on eighth grade night, Sept. 9.

Mullinax, the son of legendary Tellico Plains head coach John Mullinax who passed away early in the morning of Aug. 1, wanted to share the moment with his late father.

He also wanted to let him know he got one over on him.

“As many games dad coached, I got one more than he did. He never beat Sequoyah and I did. So for Dad in heaven, I got this one on him,” Mullinax said.

Before the game reached the end of regulation, the Junior Chiefs had a chance to seemingly steal it away. Shane Sloan and Connor Lawson split touches marching the ball down the field — something they struggled to do since their first drive.

The Junior Chiefs got to the five yard line, but could not get a play off as time expired — sending the game into overtime.

“Pride. They are very prideful. Shane Sloan is a a young man who has never played football before. He has been an excellent basketball player. He is really just learning. He has a lot of pride and he has a lot of push,” Junior Chiefs Coach Stan Rice said. “For him and Connor Lawson, they both stepped up really hard when we really needed them. They are small guys, going up against the big guys time after time is hard, but they got the job done. It is all about pride right there.”

A combination of runs from Hollinghead and Will Sanders moved the ball inside the five and, with 3:30 to go, Trevor Kibler scored the tying score on a 5-yard quarterback keeper.

“You have to give Sequoyah credit. (They’re) big up front and they were hurting us early. We made some adjustments and went to the Wing T, my dad who is up in heaven would be proud. We made some changes and those guys up front got us going,” Mullinax said.

While the touches went to a trio of Junior Bears, their animated coach was quick to hoist up players like Lynkon Hamilton, Landon Hamilton, Hayden Phillips, Jaden Driver, Nathaniel Bivens, Kobe Bradley and Dalton Thomas.

“Those guys did a job. Isaac Hollinghead told me he wanted the ball (in overtime). He has been here two years, he is an eighth grader and tonight is his night. He must have run over them with three or four guys pushing him into the end zone,” Mullinax said.

Early into the night it was the visitors who started things off hot. The Junior Chiefs converted an onside kick that was followed by 41 yards on five plays from Shane Sloan — capped off by a 1-yard touchdown run just 2:59 into the game.

The Junior Chiefs, with a significant size advantage, then shut down the opening Junior Bears drive. However Rice’s team could not recapture the momentum they had on the initial drive until the end.

“I’m proud of these guys both ways. I just feel like, if we did not have our 40 yards in penalties at the beginning of the game, we would never have been in the situation at the end of the game. So we have to get better at the beginning of the game. We need to clean up our mistakes … we’re getting there,” Rice said. “We had a week off for COVID-19 and with two practices it is kind of hard. We had 12 or 13 out in the last two weeks, but we are going to get back to where we were. We’re going to be alright.”

With the ensuing possession in overtime, the Junior Chiefs quickly found themselves in a hole, 4th down and 12 yards to the end zone.

Sloan got the ball on a flea-flicker, reared back and fired a pass complete to Elijah Fariji. After a pile up and a delayed call from the officials, the Junior Chiefs came up shy by about a blade of grass.

“We had to step up and we had some play all night long. I think we kind of wore them down. We made some adjustments and we wore them down in the second half. It took two plays for us to win the game, I don’t know if it could end any better,” Mullinax said.

The night was a solid outing for fans of defensive football as they would appreciate the Junior Bears’ defensive success this season. Mullinax’s defense, led by Coach Mike Millsaps, has allowed only two scores on the season.

Adjusting to combat the size and strength advantage from the Junior Chiefs was a testament to the Junior Bears’ discipline.

“They kind of came out in something a little different and their size affected us, I’ll say that. Not to mean that our guys are scared by no means. After that first drive we figured some things out and moved some people around. They did not get much after that first drive,” Mullinax said.

“We will go as far as that defense. We will block and tackle the way we did down the stretch — we did not play our best game by far. Being off hurt us, we only go to practice one day in pads. I’m not trying to make excuses — Sequoyah had to do the same thing — but that hurt us.”

The Junior Bears’ offense has been prolific in 2021, scoring 30 and 46 points in their last two outings — meaning the 28:30 of shutout football put together by the Junior Chiefs is no easy feat.

“We kind of wore out in the end. Towards the end of the game we started getting out of breath and getting tired. I got them to suck it up a lot and hold in there,” Rice said. “I know the feeling — I have lung cancer — I know the feeling when you are in there and you are tired. It gets really hard, but that’s where the physicality of the game comes in. Being off for the week does not help. That is the part we have to pick up at practice. I believe we will be alright.”

The Junior Bears return to action at the Sweetwater Junior Cats on Sept. 23. The Junior Chiefs host Lake Forest on Sept. 16.