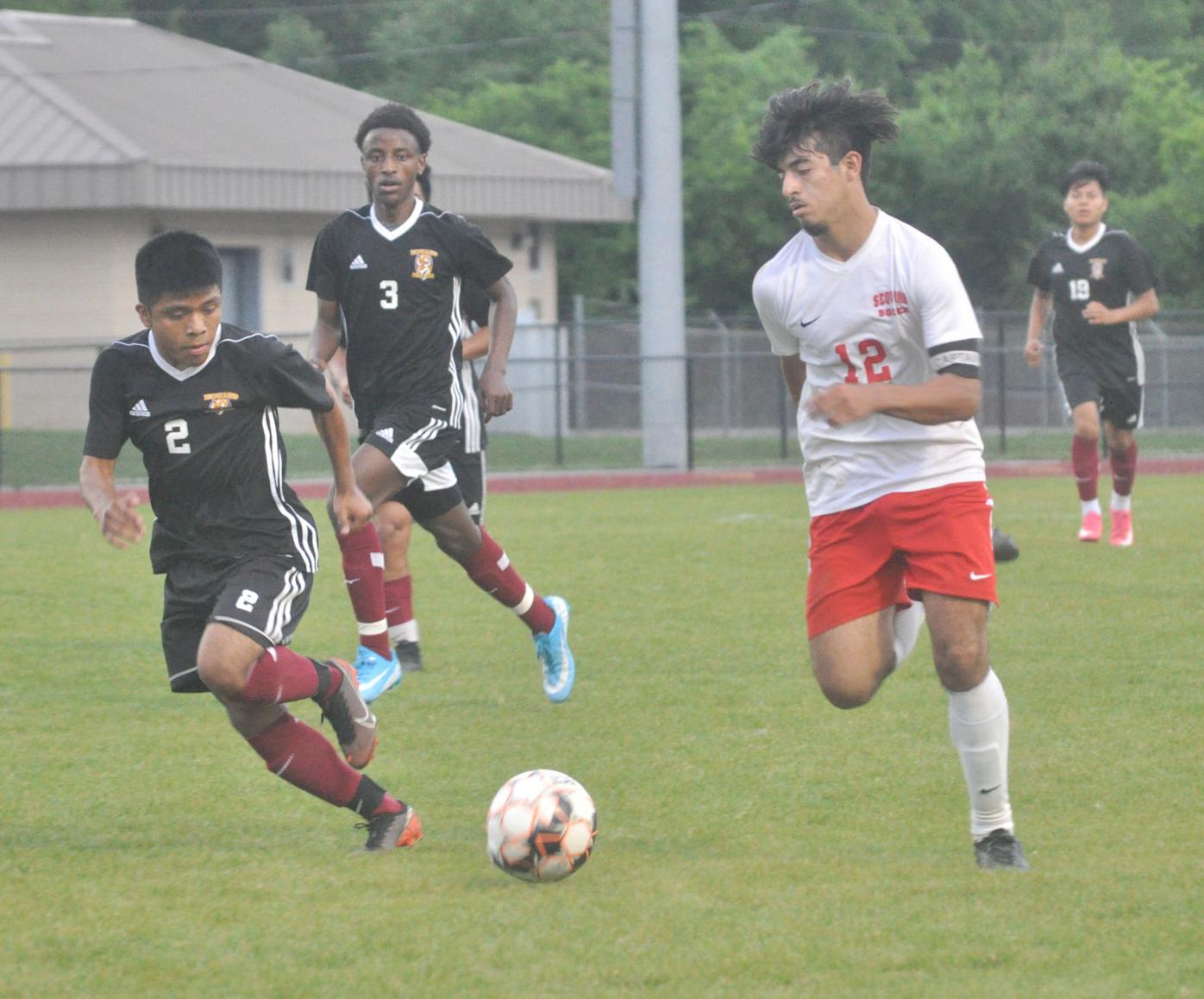 Ruben Ramirez moves the ball for Sequoyah in the Chiefs’ 5-0 loss to Howard in the Region 4-AA semifinals on May 18 in Chattanooga. 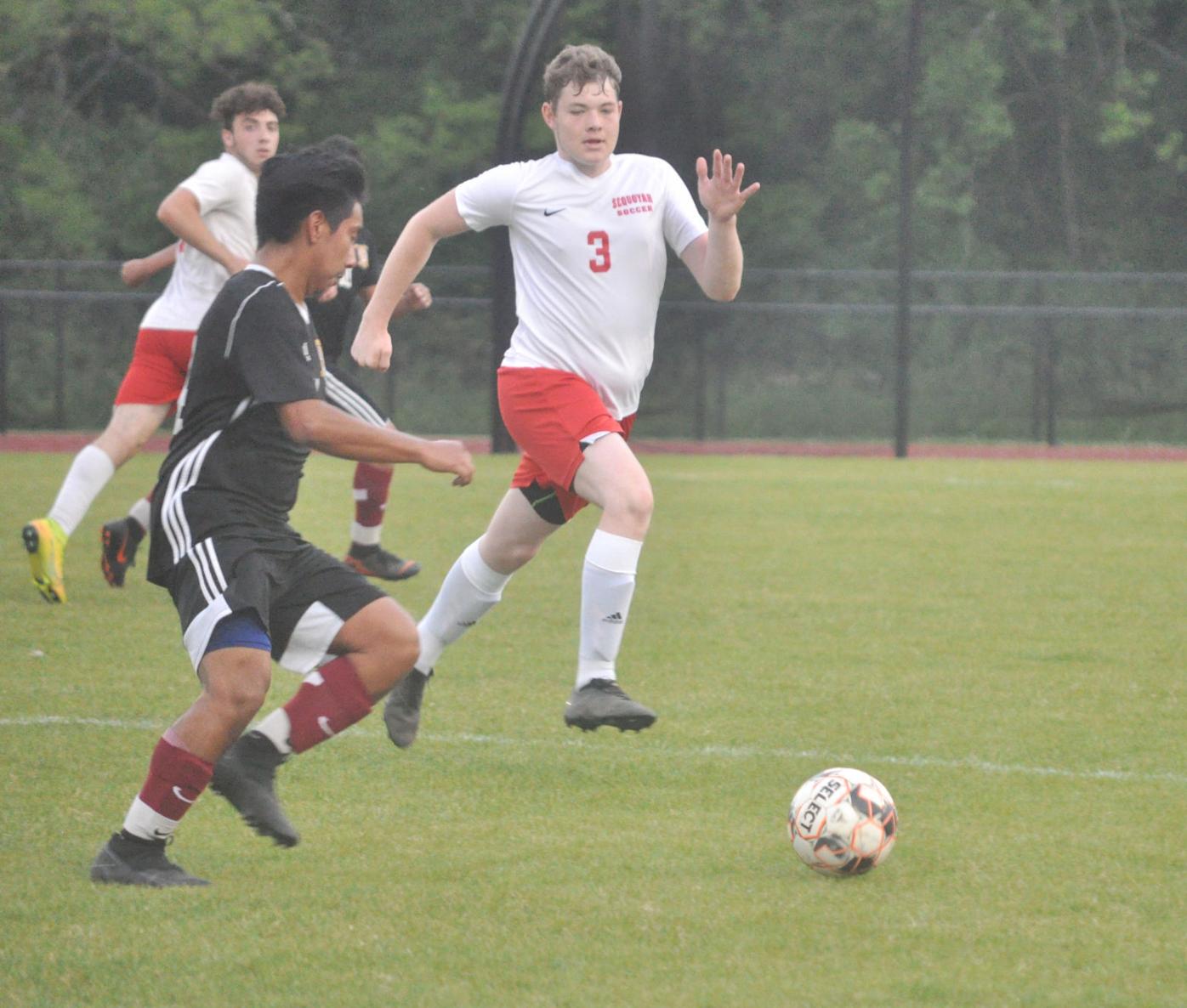 Riley Allman goes to block a pass in Sequoyah’s 5-0 loss to Howard in the Region 4-AA semifinal on May 18 in Chattanooga. 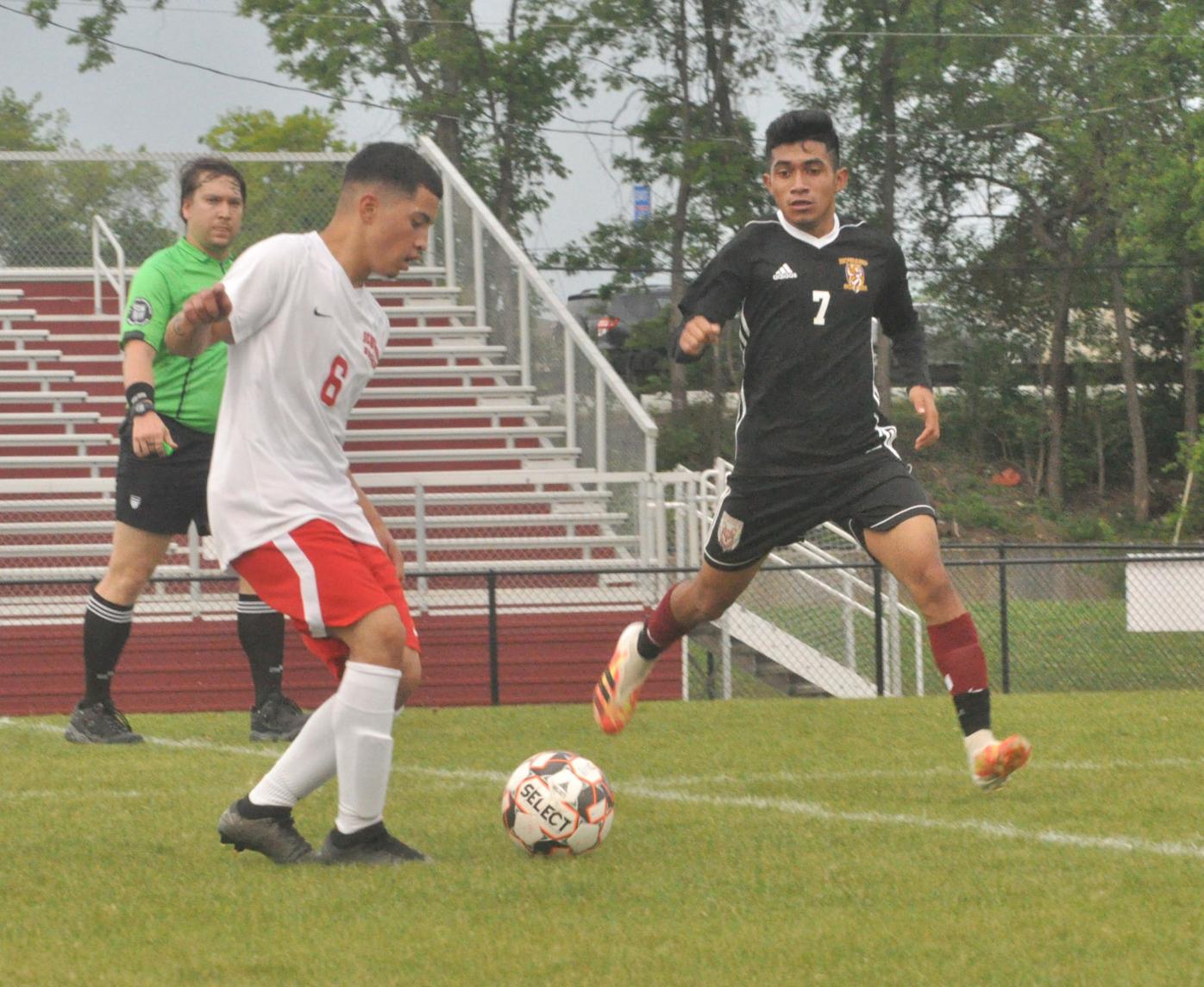 Nata Carcamo moves the ball for the Chiefs in Sequoyah’s 5-0 loss to Howard in the Region 4-AA semifinals on May 18 in Chattanooga.

Ruben Ramirez moves the ball for Sequoyah in the Chiefs’ 5-0 loss to Howard in the Region 4-AA semifinals on May 18 in Chattanooga.

Riley Allman goes to block a pass in Sequoyah’s 5-0 loss to Howard in the Region 4-AA semifinal on May 18 in Chattanooga.

Nata Carcamo moves the ball for the Chiefs in Sequoyah’s 5-0 loss to Howard in the Region 4-AA semifinals on May 18 in Chattanooga.

CHATTANOOGA — Sequoyah soccer’s visit to Howard Tech showed the two situations the programs are in.

Due to injury and other issues, the Chiefs only fielded 11 players after having 14 on the roster at the start of the season.

Howard had 65 kids show up to tryouts and were able to field a 22-man varsity and 22-man junior varsity to start the season.

The disparity showed on the field, with the Hustlin’ Tigers getting on the score sheet inside five minutes en route to a 5-0 win over Sequoyah in the Region 3-AA semifinals on May 18.

“It has been awesome. It has been hard. It has been gut wrenching at times. We deal with what is in front of us. I tell them to get blinders on and focus on the task at hand. (I tell them) to go into each game like it is their last game,” Sequoyah coach Manuel Orozco said. “Unfortunately, we have had injuries. Those players, at the moment, didn’t realize they were playing their last game. I told them to take that into consideration and that, due to COVID, we could be shut down at any time. We didn’t know what could happen, so be aware that every game could potentially be their last game so put 100% into our effort.”

Jefferson Bravo Lopez’s opening goal was complimented in the 14th minute by a bicycle kick finish from Amos Vyizigiro.

Sequoyah’s clearance from the right flank into the middle created the early chance for Bravo Lopez, and Vyizigiro pounced on a ball in the box after Roni Cruz blocked the initial shot.

Vyizigiro finished with a hat trick for the Hustlin’ Tigers. Bravo Lopez had a brace.

Sequoyah senior Ruben Ramirez took a long ball in stride in the sixth minute into the box. Ramirez cut outside to create an angle and forced a save out of Bryan Calderon Gomes.

Ramirez also carried the ball into the attacking third for the Chiefs in the 30th minute, winning a corner. The senior got his head on the ball in, but Calderon Gomes came up with a save to keep the clean sheet.

“I am extremely proud of how well the team played the entire season. Obviously, we didn’t finish where we would’ve like to, but the herculean effort that the guys put in day in and day out made them better players as well as accomplished young men,” Orozaco said. “I wish I could have offered them more. It is one situation, but the adversity we went through at the beginning of the season to where we ended up … I’m very proud of the team.”

Life in the Red: The good, bad and potentially ugly ramifications of likely NIL changes, presented by Scott Frost

Playbook learning, on-field competing and … napping? How Packers rookies have benefited from a true offseason

When Ramirez picked up a yellow card in the 36th minute, the Chiefs were temporarily down a man, creating the chance for Howard’s fourth goal from Bravo Lopez. Vyizigiro scored seven minutes into the second half to complete his bag.

Sequoyah had the closing effort of the half — a shot on target from Lisandro Avila created by Jose Avila.

“I was telling the players at the end that I would rather go down with them and those 11 players that were on the field than having a program like (Howard),” Orozco said. “I am so attached to Sequoyah soccer and these players that I wouldn’t (want to) be in any other situation. I have been at Sequoyah and extremely happy these few years.”

Depth has been an issue for Sequoyah throughout the season — even having to cancel a game due to the number of players available. However, the Chiefs have put up a 7-3 record on the year and were within an overtime period of a regular season district championship and a District 7-AA Tournament Championship.

Ramirez came within inches of getting on the score sheet in the 56th minute when his corner kick curled in and was cleared off the line.

Senior Nata Carcamo took a long range free kick in the 49th minute that forced a save.

Sequoyah finished the night with 10 shots — five of those from Ramirez — forcing Howard into six saves.

Alex Espinoza, senior keeper, finished with five saves for the Chiefs — including two off of a pair of volleys.

“It has been an awesome experience to see them as freshmen — come in as 14-year-old kids and now graduating and becoming 18-year-old men. It is bittersweet — to see their last game,” Orozco said. “I am going to miss the players, especially the seniors. I keep telling them how honored I am to have coached such a talented group and seeing them come together as family made the experience unforgettable.

Howard will move into Class AAA in the new classification next school year. The Chiefs’ district stays the same, but Soddy-Daisy will join the region.