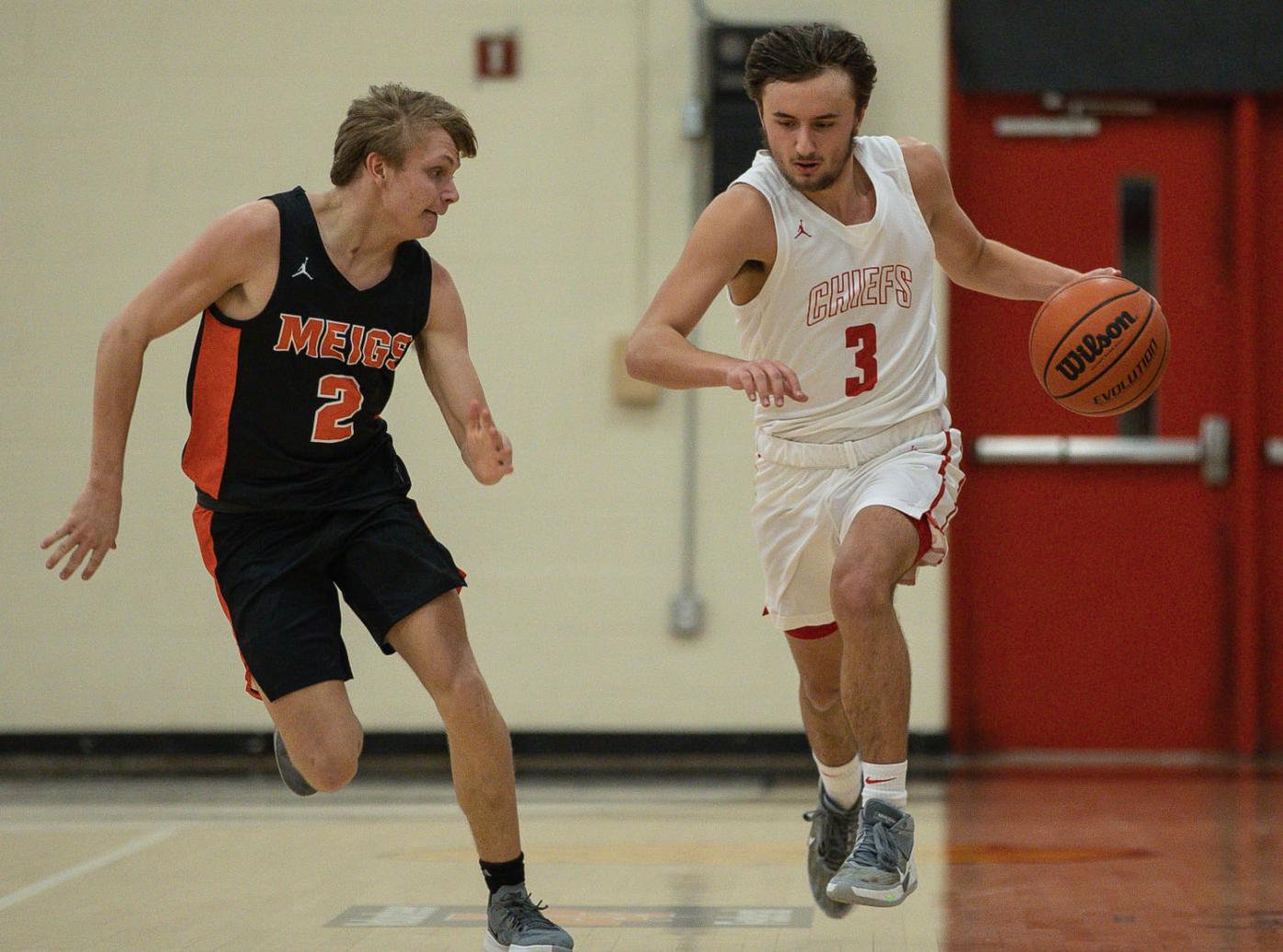 Cooper Strickland moves the ball for the Chiefs against Meigs County’s Seth Caldwell in Sequoyah’s 74-52 win on Jan. 5 in Madisonville. 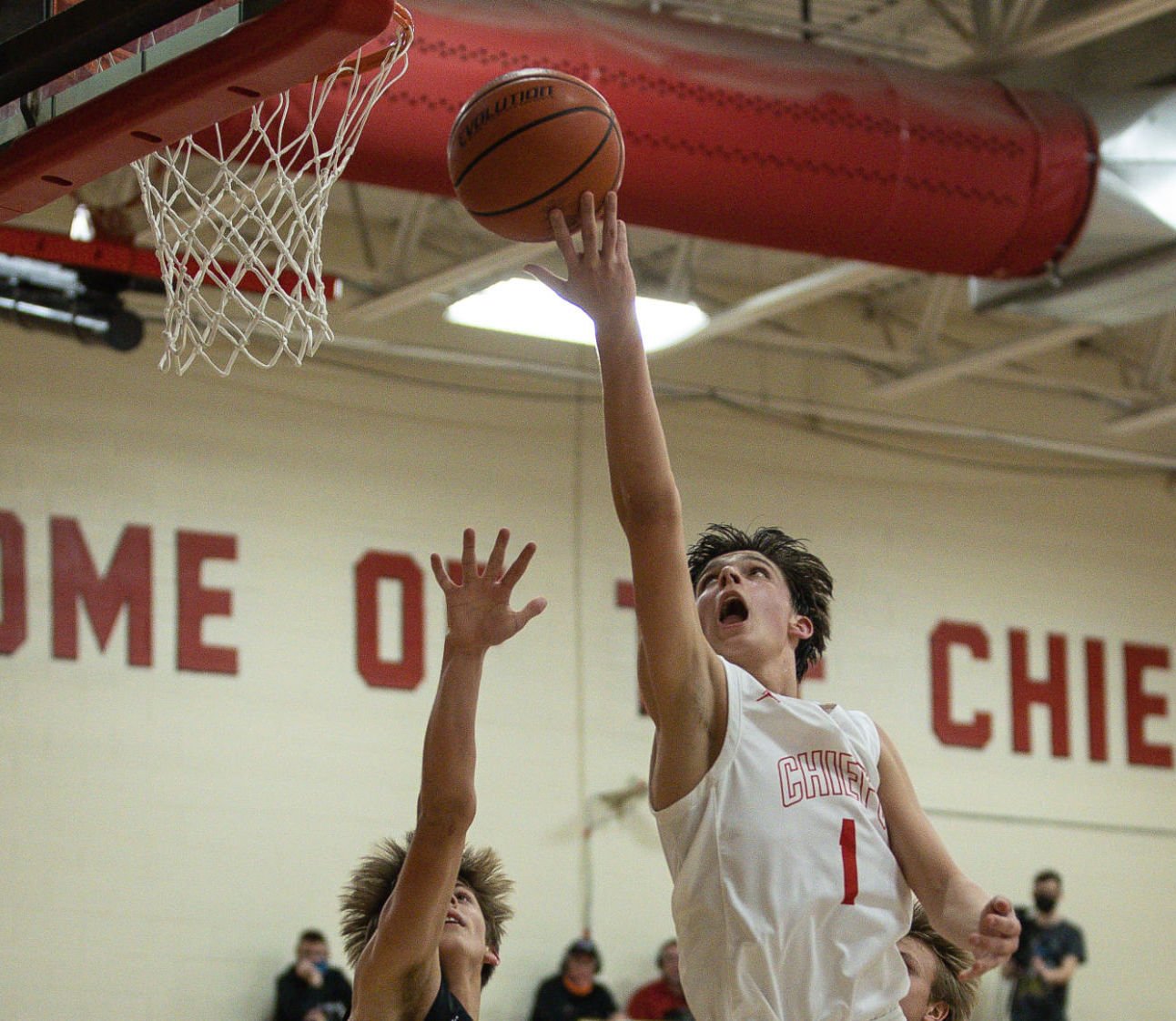 Caleb Sloan goes to the basket for the Chiefs in Sequoyah's 74-52 win over Meigs County on Jan. 5 in Madisonville.

Cooper Strickland moves the ball for the Chiefs against Meigs County’s Seth Caldwell in Sequoyah’s 74-52 win on Jan. 5 in Madisonville.

Caleb Sloan goes to the basket for the Chiefs in Sequoyah's 74-52 win over Meigs County on Jan. 5 in Madisonville.

Sequoyah cruised to their first District 5-AA win of the season in their first game of 2021.

Stakely, a junior, is averaging 20.6 points per game and leads the Chiefs with 124 points on the season.

However, it was Jackson Kuberka and his 24 points that led the Chiefs. Kuberka, a 6-foot-6, uncommitted senior, is averaging 18.5 points per game for Sequoyah.

While Stakely and Kuberka are typically the headliners on Coach Andy Pennington’s squad, it was the lesser heralded starters who brought in the Chiefs’ first win in district play.

Cooper Strickland broke into double figures as well, his 15 points came mostly in the fourth quarter, as the Chiefs tried to stall any sort of comeback from Meigs County.

“Cooper played like that all last year,” Pennington said. “I put him off and he’s not our point guard because I wanted the ball more in his hands to make decisions. We moved Caleb to the point, and he has done a great job. Tonight, that looked like the old Cooper. I am super super happy for him. When he plays off two feet he is as good as any guard in the district. He can finish and he can make plays for other people.”

Caleb Sloan, one of Sequoyah’s more consistent players, got more involved in the scoring later in the night.

Sloan finished with nine points, including a late 3-pointer.

“Caleb looked a little impatient tonight, and I think that is because he has had such a good start to the season. That is just another growth thing — it is not that he wasn’t getting shots, but it was not just his night. He was getting shots for everybody else,” Pennington said. “We got Hayden Rhea and Cole Strickland in as well. Hayden and Cole have been doing great in practice. I am not the type of guy who is going to work your tail in practice then not reward you in a game. Asher Dalton got in, and he was out for 30-something days. We are trying to get him back in shape.”

Perhaps the biggest takeaway from the night, the Chiefs got on the winning side in district play. Early losses to Loudon and McMinn Central have put Sequoyah back in the league standings, but with plenty of district basketball ahead, the Chiefs can control their own fate.

Tiger Kings: LSU's Thomas too much as MU loses in regular-season finale

“We expected big things this year, but did not get off to the start we wanted. I know it is still early on, but now I feel like we have the chance to fight back and see what we are made of,” Pennington said.

In the third quarter, the Tigers (3-7, 0-1 District 5-AA) tried to salvage the contest — led by Matthew Boshears who had 19 points, all coming in the second half.

Sequoyah made adjustments to keep the ball away from Boshears, and to force Meigs County into taking tough two-point jumpers.

“We don’t want teams to shoot threes. If you go back and watch the film on the tough shots they made, those are the tough shots we want people to make — I promise those are not the shots they are working on in practice,” Pennington said. “If they make them, good for them, but if they don’t we are going to get the rebound and we are going to go. We can rebound those a lot better than those threes.”

Meigs County’s Ethan Moore finished with 14, 12 of those coming in the opening 16 minutes.

“(We were) definitely talking. At halftime we were told to know where (Matthew Boshears) and (Ethan Meadows) were the whole time, so that is what the two forwards and I tried to do the whole time,” Kuberka said.

Kuberka, like every other athlete in the county, has had to patiently wait to get back on the court, ending a three week long layoff.

“I came into the locker room first time here, and coach said he could tell in my eyes how excited I was. It was definitely good to be back,” Kuberka said.

After not being together for over half a month, Sequoyah has a tough turnaround with six games in nine days — including trips to Class AAA’s Lenoir City, Cleveland, Knoxville West and Maryville.

“We have had five weeks off, and we just played off three weeks,” Pennington said. “But now we are getting ready to play six games in nine days. All of them are really good quality opponents, and I may shoot myself in the foot for doing it. This is my thing though, we play or practice everyday, so why not play. In the world we are living in right now if I can get games we are going to play and be thankful we can get out there and play.”

Sequoyah will return to action on Thursday when they visit Lenoir City.