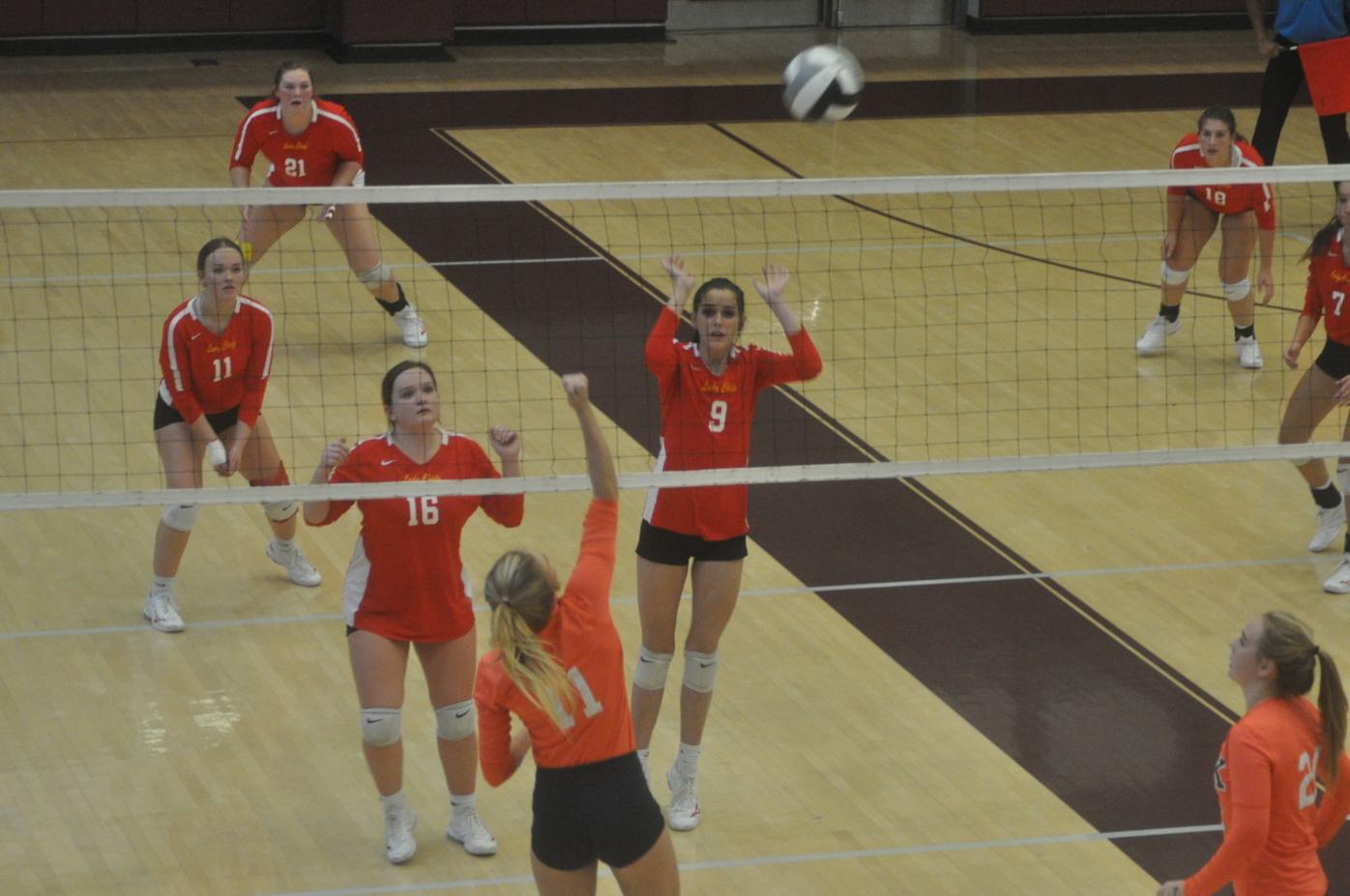 Sequoyah’s Emma Massengale (16) and Jordan Alsup (9) defend during the Lady Chiefs’ 3-1 loss to Kingston in the District 5-AA Quarterfinals on Oct. 4 in Alcoa. 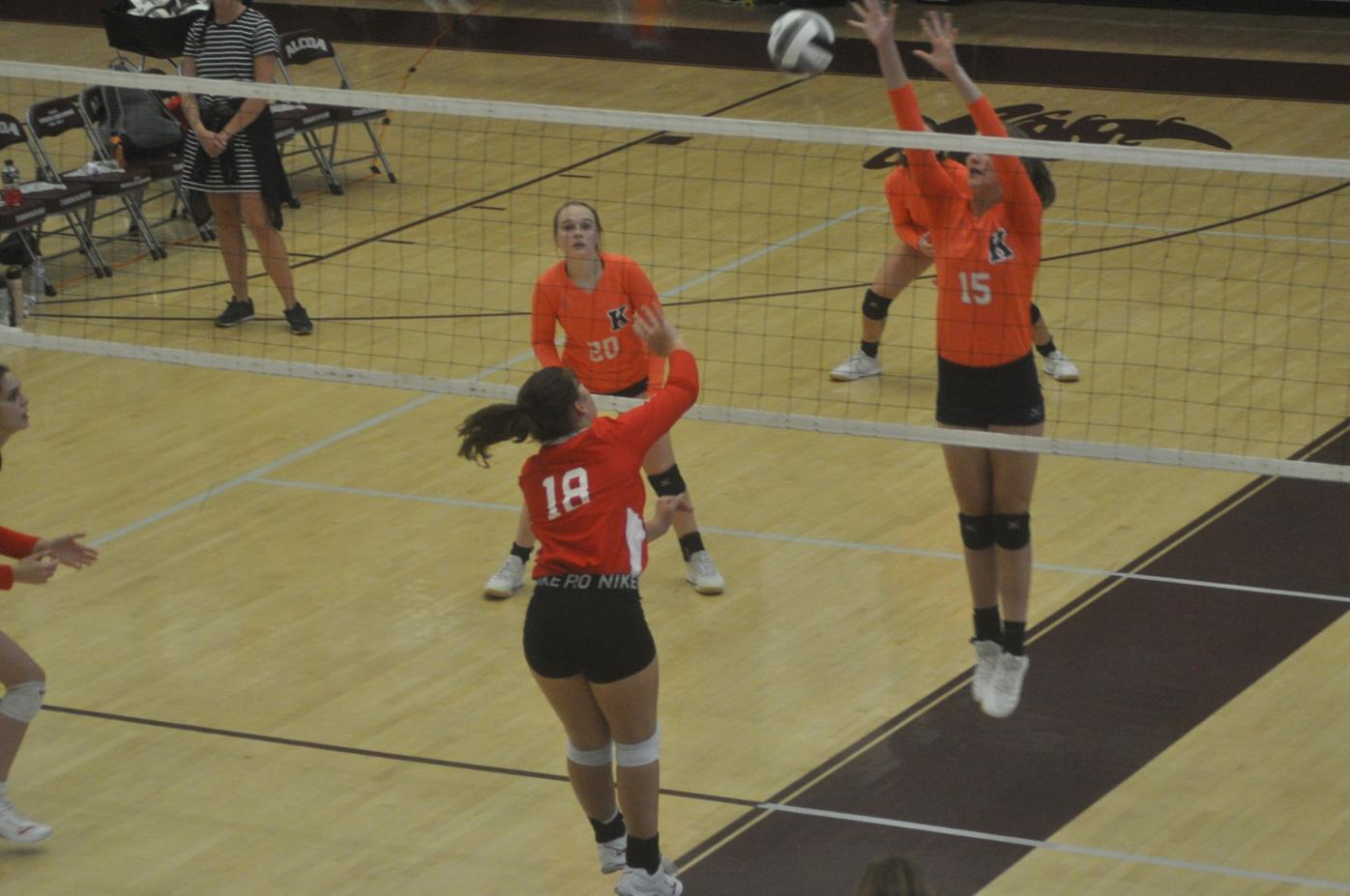 Sequoyah's Natalia Shank hits the ball during the Lady Chiefs' 3-1 loss to Kingston in the District 5-AA Quarterfinals on Oct. 4 in Alcoa.

Sequoyah’s Emma Massengale (16) and Jordan Alsup (9) defend during the Lady Chiefs’ 3-1 loss to Kingston in the District 5-AA Quarterfinals on Oct. 4 in Alcoa.

Sequoyah's Natalia Shank hits the ball during the Lady Chiefs' 3-1 loss to Kingston in the District 5-AA Quarterfinals on Oct. 4 in Alcoa.

ALCOA — In the early going of their District 5-AA quarterfinal, Sequoyah volleyball showed they can compete.

The Lady Chiefs were doing everything they needed to do — spread the floor, make plays at the net and force Kingston into tight angles.

And for some time it paid off. But, as the game progressed, the rhythm faded. Kingston found their zone and came from behind to beat Sequoyah 3-1 and progress to the District 5-AA semifinals.

“We played really well in that first set — I was really proud of us,” Sequoyah Coach Rebekah Monhollen said. “Unfortunately, we did not keep that up at all. We played so well and we could not find that rhythm again. I was very proud of them for how they were moving. That was some of the good play that we needed.”

The Lady Chiefs were not allowing much space to their young opposition. Kingston — sporting only one returning player from a year ago — was struggling to hit the mark, misplacing shots as Sequoyah quickly jumped out to a 10-3 lead. Sequoyah senior Zoe Cathcart was dialed in the early going. She delivered two blocks in three points and a kill to get her side up seven. Cathcart finished the night with six blocks, a pair of kills and two aces.

Kingston rallied in the first set, cutting the Lady Chiefs’ lead down to 19-18, but a combined block from Emma Massengale and Cathcart was emphatic enough to help see the set close out 25-19.

Kingston picked up speed in the second set — mostly behind Cat Hackett, who finished the night with 12 kills.

“It’s difficult (to defend against Hackett). She was the MVP of the district last year — she is a good player, there is no doubt about it,” Monhollen said. “When we got our hands on her it was great, but she is a good player. The girls … we just have to match up and we are not used to seeing someone of that caliber early on.”

Pinpointing an exact moment that the tide turned is hard across four sets, but a controversial end to the third set helped quell a Lady Chiefs’ comeback.

Down 22-19, Sequoyah earned points off of a Kingston error. The Lady Chiefs then hit two balls out of play, making the score 24-20 Kingston.

A Kingston player appeared to hit the ball out of play, but the point was awarded to the Yellow Jackets. Both teams stayed on the court while the point was deliberated and ultimately awarded to Kingston — winning the set 25-20.

The Lady Chiefs held a 16-10 lead in the third set before things took a turn. An error, followed by a Kingston ace, brought the Lady Yellow Jackets closer. Sequoyah then hit the net followed by two more points tilting Kingston’s way.

Monhollen took a timeout ahead 17-15.

Michael Thomas could be a couple weeks away from Saints return: report

College football on TV: This week's lineup and your best bets

“(I wanted us) to pick up energy and communication,” Monhollen said. “That first set we played really well and came out strong, but then we slowly lost energy and momentum. I was hoping to get it back, but we kind of never did.”

Out of the break, Sequoyah surrendered five of the next seven points.

Kingston made things difficult with their serving throughout the night. The Lady Yellow Jackets scored 10 aces on the night.

Defending the serve and making strong first contact had been an issue for Sequoyah this season — prompting a change in how they handled their receives entering the match.

Kingston hopped out to a 4-0 lead in the fourth set before Sequoyah tied the match at five-all. Senior Jordan Alsup delivered a kill to cut Kingston’s lead down to three, but Kingston hit another level after that.

The Lady Yellow Jackets went on 6-0 and 11-1 runs to go ahead 23-11. Backs against the wall, Sequoyah mimicked how they looked in the first 10 points of the game — spread the floor and made plays.

Natalia Shank delivered a kill and Massengale made an ace to cut the lead down to 24-18 before Kingston mustered out the final point of the night.

“(They were) my first group of freshmen coming in, so I had these girls all four years. I really got the chance to know them, see them grow, see where they come from and see them play,” Monhollen said. “It has been a joy — we’ve had struggles — but I am really proud of these girls and how they came in as freshmen not knowing much about volleyball and seeing them grow.”