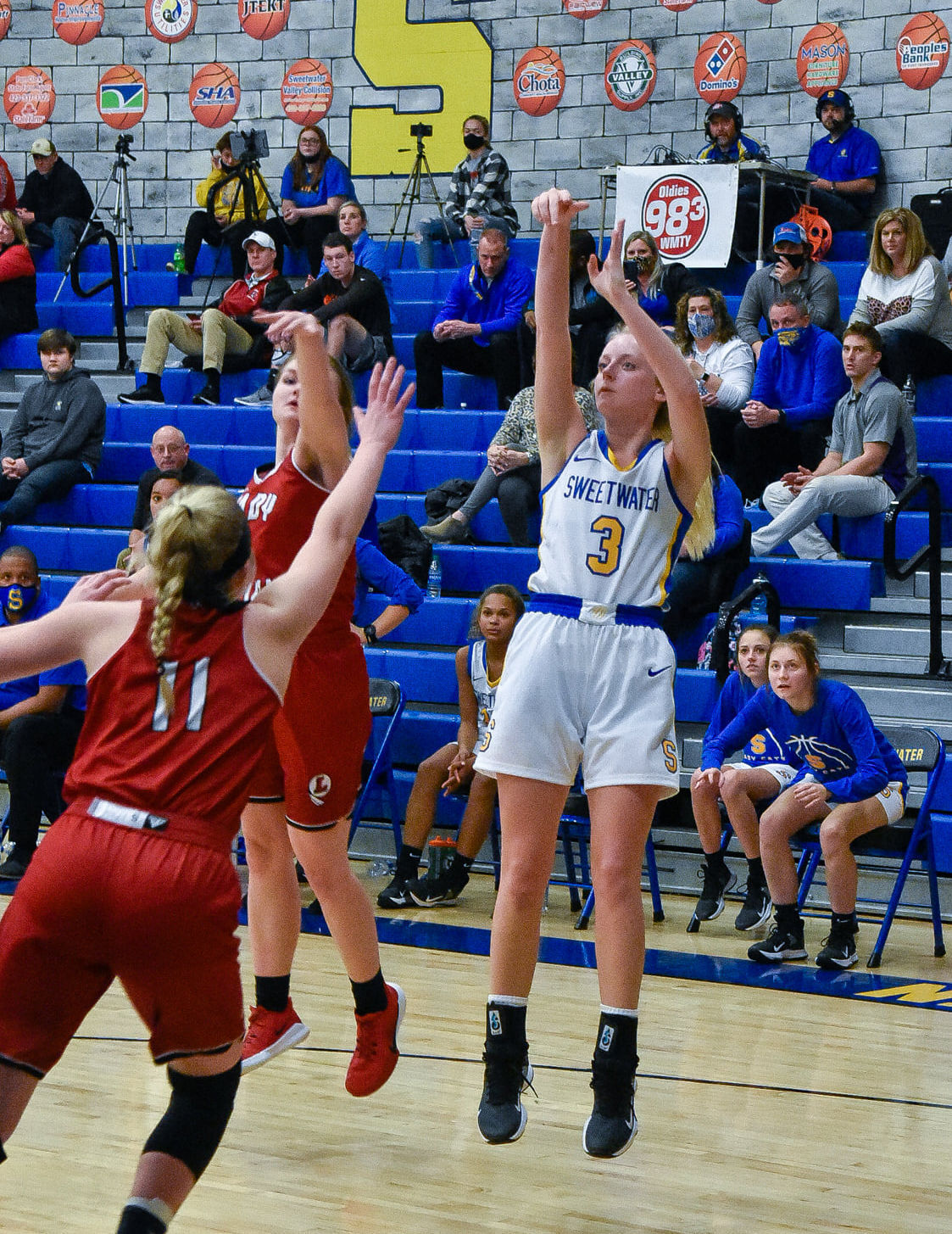 Abbey Barr (right) takes a shot for Sweetwater in the Wildcats’ 64-40 win over Loudon on Jan. 12 in Sweetwater 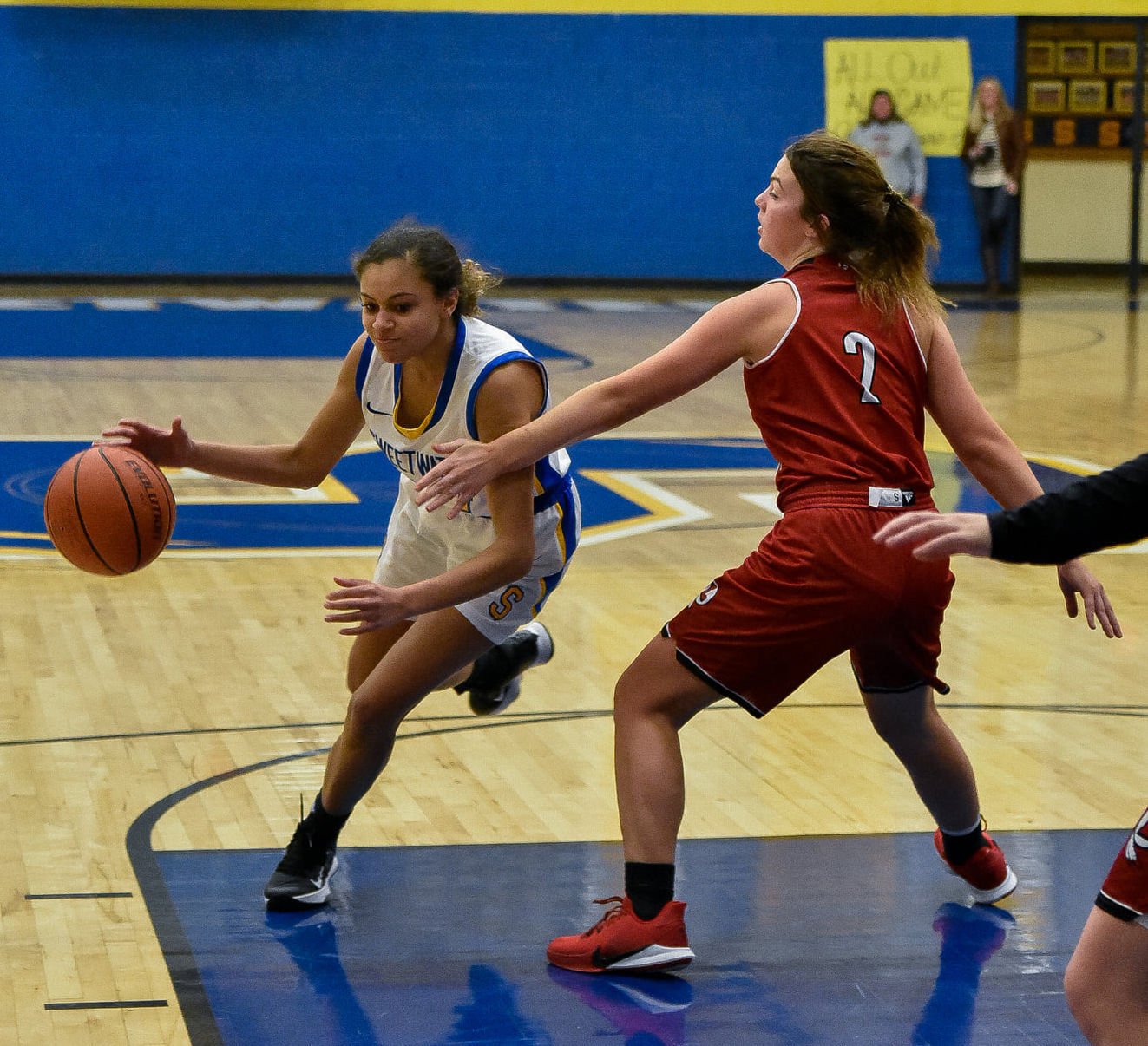 Alaysia Macon dribbles the ball for Sweetwater in the Wildcats’ 64-40 win over Loudon on Jan. 12 in Sweetwater.

Abbey Barr (right) takes a shot for Sweetwater in the Wildcats’ 64-40 win over Loudon on Jan. 12 in Sweetwater

Alaysia Macon dribbles the ball for Sweetwater in the Wildcats’ 64-40 win over Loudon on Jan. 12 in Sweetwater.

SWEETWATER — Abbey Barr put on a lights out performance for the Sweetwater Lady Wildcats when they hosted Loudon in District 5-AA basketball Tuesday.

Barr’s five first half 3-pointers powered the Wildcats to a 64-40 win, their first victory in district play this season.

Barr finished the night with 31 points, a season high, behind eight triples. She knocked down four 3-pointers in the second quarter, as an 11-0 run helped Sweetwater create the distance needed to feel comfortable.

“You can’t describe it unless you see it. It is just amazing,” Sweetwater’s Trinity Upton said. “I help her out by making sure she can get a shot, and get into her moment.”

Sweetwater’s win brings them level in District 5-AA play at 1-1. Loudon drops to 0-3 in the league.

“It felt great to have the girls focused,” Sweetwater Coach Heather Jaramillo said. “We still have a lot of work to do on our defensive side, but I was happy with our overall performance. People grabbing down rebounds and finding the open shooter. We really played a team ball tonight.”

Season delays have pushed back much of the Lady Wildcats schedule, making tonight their second district game of the season. A 53-33 loss to McMinn Central on Dec. 3 makes this the first league win since beating Polk County 35-32 on Feb. 14 last season.

“The momentum is going great. We are just slowly coming together as a team, and getting better at our own game,” Upton said.

The Lady Wildcats’ 64 points are a season high, well above their 43.1 average.

“They came on the floor with a determination that I have been waiting on them to step on the floor with,” Jaramillo said. “Rolling over from Rhea County into tonight, I can see the progression of where I want them to be heading. Now it is continuing to tick away at the little things that we have to fix and get better.”

Sweetwater, for the first time this season, has stringed together back-to-back wins after beating Rhea County 54-24 on Jan. 8.

“I think you are starting to see the confidence on their faces as they are playing. They are starting to feel each other more as a team,” Jaramillo notes. “They are knowing what each other’s strengths are and how they are going to move as a team. We still have more work to do, and we definitely have not arrived, but I think that we are headed down the right path.”

The Lady Wildcats were scoring like they wanted to cement the win early, a 19 points second quarter being one of their offensive highlights of the year. However, loose fouls in the paint kept getting the visitors to the line, allowing Loudon to hang in the game, cutting an 11 point lead to six and trailing 33-22 at the half.

Upton made an impact early to lift the Lady Wildcats. She finished the night with seven rebounds, including five in the first quarter. Upton also went 5-for-6 at the line and mixed in a basket from the floor to finish with seven points on the night.

“Well rebounding does not take much, all it takes is heart and the power to go and get the ball instead of just watching,” she said.

Gracie Hart added to the scoring barrage in the third quarter, knocking down two 3-pointers of her own, as well as two free-throws. Hart finished with 10 points and two rebounds.

Early into the fourth quarter, Barr netted a pair of free throws to extend Sweetwater’s lead. Barr, a senior signee with Tennessee Wesleyan University, set a season high with eight 3-pointers. Sweetwater, as a team, finished with 10 triples.

The second quarter run for Sweetwater started as a response. Loudon’s Summer Parnell hit a corner three at the top of the quarter, seemingly showing some lift off for the visitors’ offense.

However, Barr sank back-to-back threes and then complemented them with another one moments later. Keke Norfolk closed out the run with points in the paint. Barr ended the second quarter with a step back 3-pointer with less than 10 seconds on the clock.

Sweetwater returns to action on Friday when they host Meigs County in District 5-AA action.