Kori Hamilton (left) and Chloe Ratledge shared an excited hug as they held on for the victory over Wartburg on Monday night. 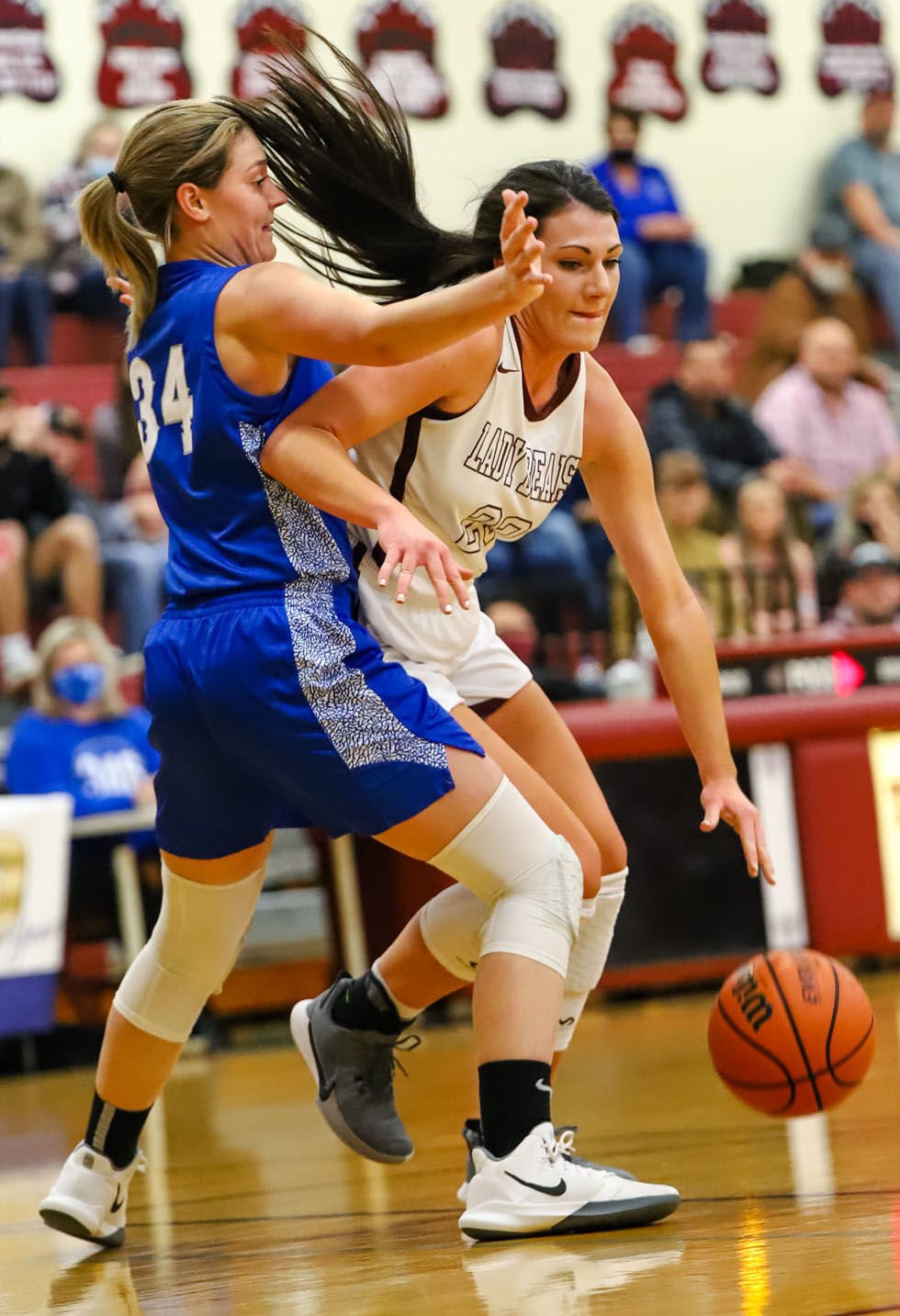 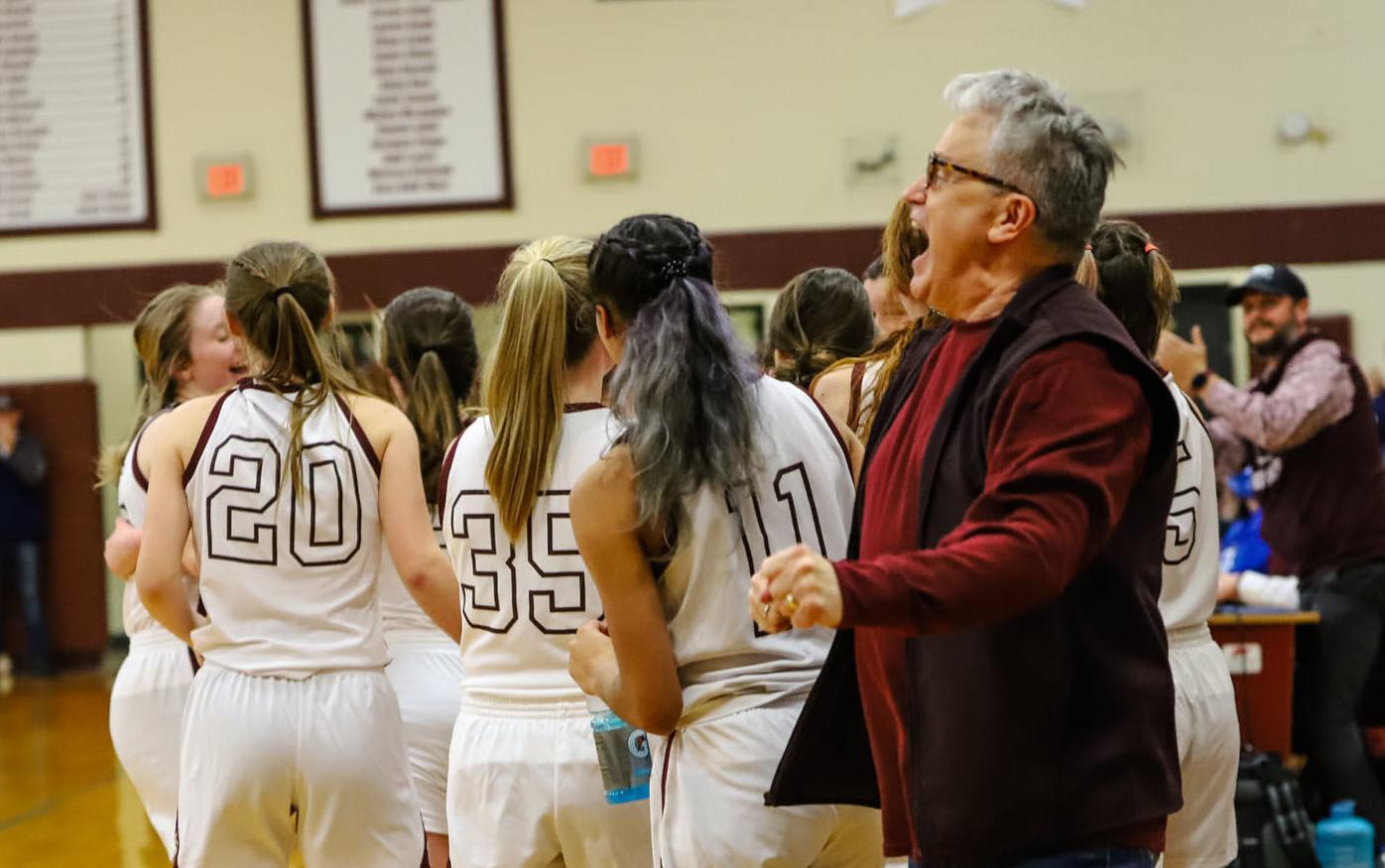 Kori Hamilton (left) and Chloe Ratledge shared an excited hug as they held on for the victory over Wartburg on Monday night.

TELLICO PLAINS — Jaden Hollinghead turned away from the basket with her hand still in the air. The senior knew in her mind that the second free throw was all that Tellico Plains needed.

Overturning a two-point deficit in the fourth, and avenging a defeat last year in the same round, Tellico Plains (24-0) booked a spot in the Region 2-A Championship, as well as a Class A sectional berth, with a 49-43 win over Wartburg Central on Monday.

The Lady Bears had to retake the lead twice in the fourth quarter. Chloe Ratledge started the quarter with a triple to tie the score at 34, followed by Hamilton adding another basket to go back ahead.

Hollinghead followed that sequence with a three-point-play for a three point lead. The shift in momentum came after an abysmal third quarter for the Lady Bears, and may have not happened if Tellico Plains Coach Gary Tucker had not called a timeout.

“It was more of an emotional (timeout). We had to settle down. We were trying to score on the first pass — five, six, seven possessions in a row,” Tucker said.

A few possessions later, Wartburg Central (13-10) retook the lead off a Selena Byrge free throw. Joell Stinnett then leveled the score at 41.

Hamilton added a basket for the final lead change and Hollinghead sealed the advantage with a score on a breakaway. The Lady Bears led 45-41 with under 1:20 to go.

“When we got the lead I knew we could handle it, but I am not one to rest until the horn goes off. I have confidence in our girls,” Tucker said.

Ratledge and Hollinghead did their job at the line, securing the win for Tellico Plains.

The fourth quarter became monumental for the Lady Bears’ season because of how the third quarter went down. Elizabeth Keathley and Regan Redmon hit back-to-back 3-pointers for Wartburg, and the Lady Bulldogs went on a 13-4 tear in the quarter — highlighted by an 8-0 run.

“I felt like we came out a little stagnant defensively, for whatever reason I don’t know. Of course, they were mentally focused and they made shots,” Tucker said.

Down the stretch, Tellico Plains caught a break.

Olivia Davis fouled out in a controversial dispute. Wartburg Central Coach Jason Davis’ argument that Davis only had four fouls fell short, and she did not return to the game. Keathley would foul out moments later.

Montana State expecting to lean on depth at running back

Hamilton, who Tucker likens to as the team’s quarterback, finished with 19 points while continuing her average of 15.1 points per game into the postseason.

Hamilton started the night off with a 3-pointer, and continued that momentum inth scoring the first seven points for the Lady Bears — Tellico Plains led 7-1 early into the night.

“I did not want the momentum to stop. I wanted us to play fast and keep playing our pace of basketball,” Hamilton said.

Hollinghead finished with a double-double off of 11 points and 11 rebounds. Ratledge finished with 13 points, followed by four points from Maggie Hooper and two from Stinnett.

Tucker stuck with his starting five for nearly the entirety of the first half. With 16.2 seconds left in the second quarter he made his first change — bringing in Emma Moore.

“I do trust that (the starters) can play. We work to stay in shape, so you can play 32 whole minutes,” Tucker said.

Throughout the night, Tucker took a different approach defensively than the Lady Bears have this season. Respecting the ability of the Lady Bulldogs, Tellico Plains pulled off their press throughout the night and gave more of the court to Wartburg than they have during much of the season.

“It speaks to (Wartburg’s) maturity. They have three seniors and a junior that has a lot of experience. I felt, especially with the foul trouble, we needed to back off a little bit. It hurt us a little — we stayed with them in the first half, and we were able to cause a little chaos,” Tucker said.

With the win, the Lady Bears advance to face Oneida in the Region 2-A Championship on Wednesday at 7 p.m.

Oneida (22-6) is the defending Region 2-A Champions and reached the quarterfinals of last year’s state tournament.

“Defense first of all, and we have to rebound. They have good experience and good interior post. They are good three point shooting team and they are experienced,” Tucker said.

Despite both Tellico Plains and Oneida being their respective district champions, the Lady Indians are given the home court per a TSSAA ruling. The ruling gives home court advantage to the odd-numbered district in odd numbered years, and vice versa.

“It is a revenge factor for us, we lost to them my freshman year, and I cannot wait. I know we can pull it off,” Hamilton said.