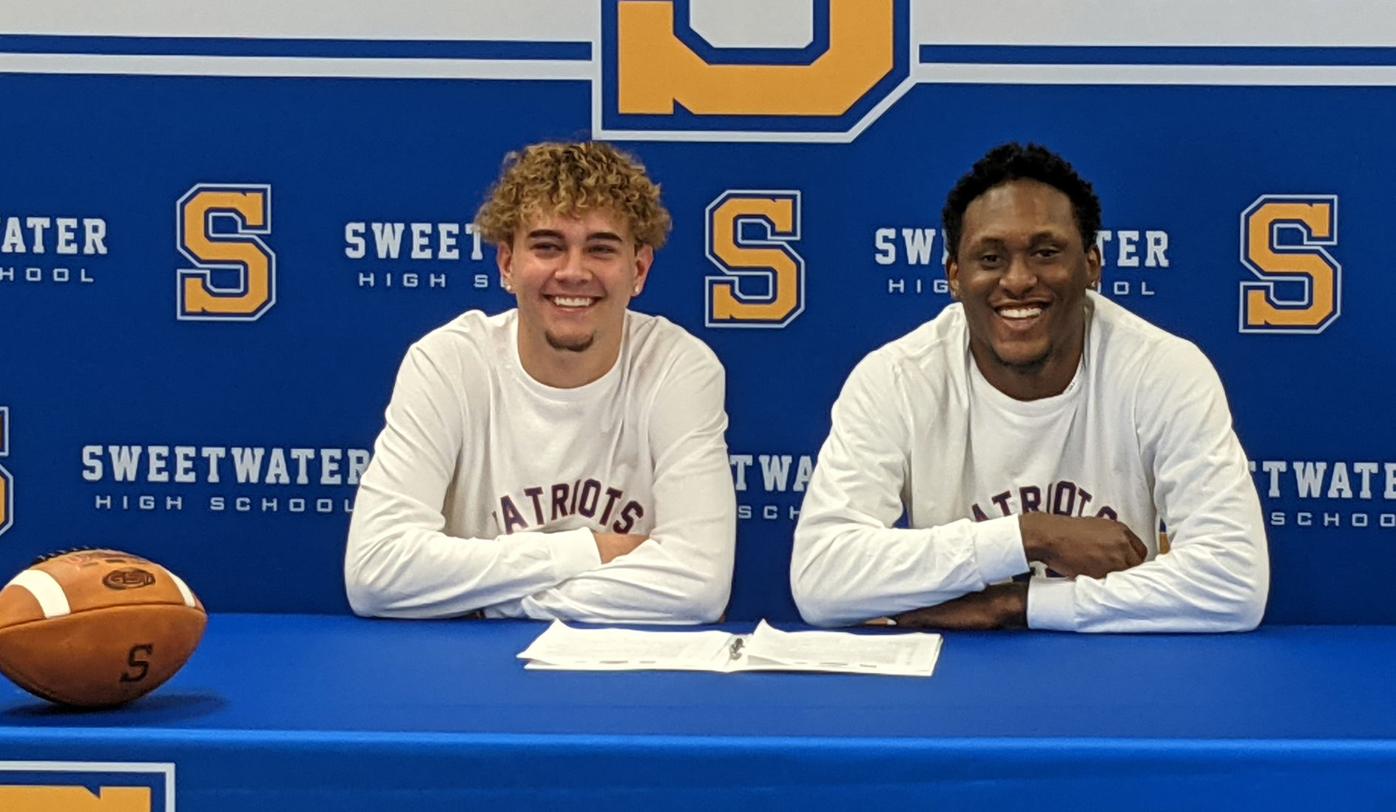 Shown here, (from left) Austin Long and Kaleb Johnkins pose for a photo after signing with the University of the Cumberlands on April 29 in Sweetwater. 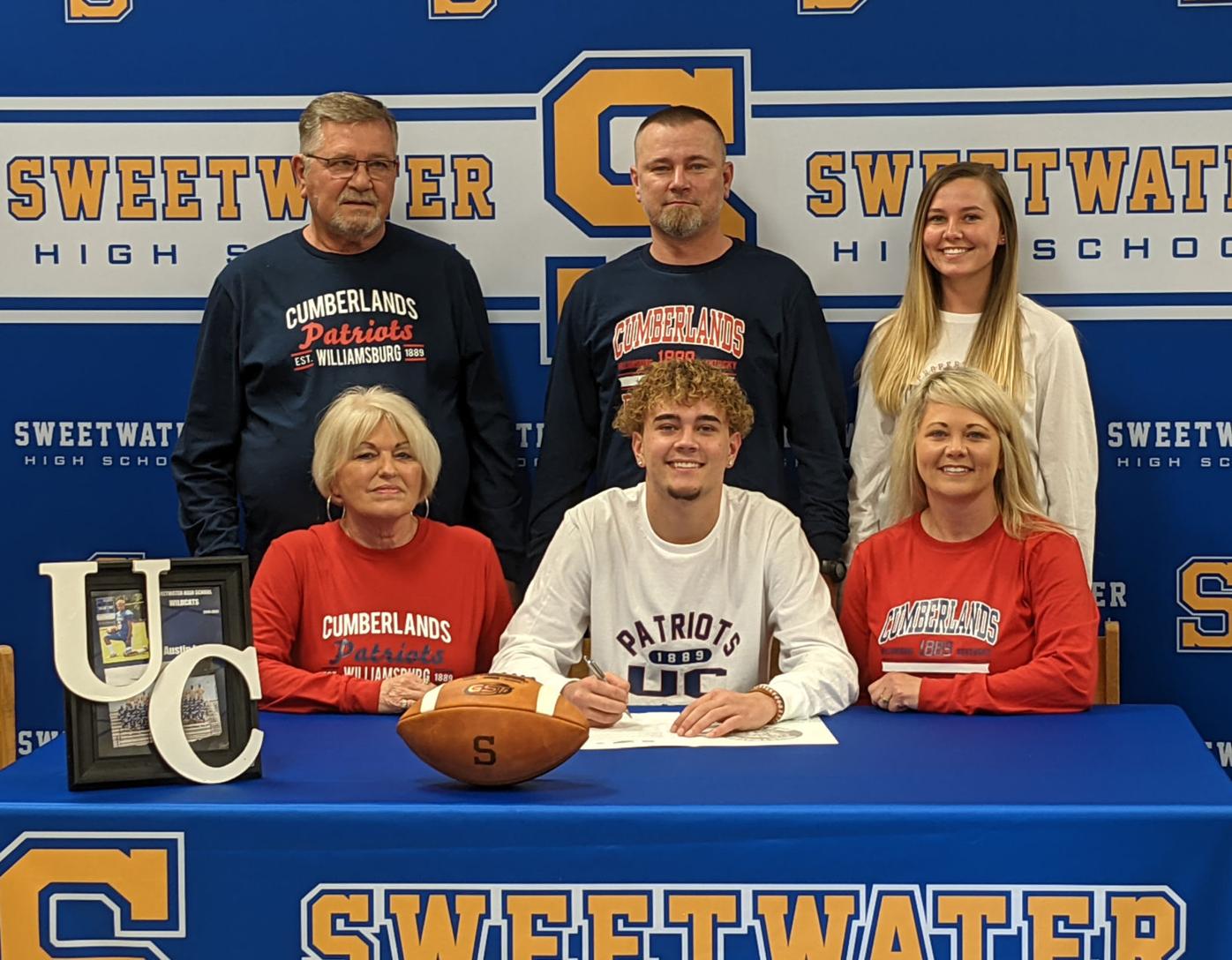 Shown here, (front row, from left) Vicky Long, Austin Long, Christina Long, (back row, from left) Bill Long, Travis Long and Darian Long pose for a photo during Austin Long’s signing with the University of the Cumberlands on April 29 in Sweetwater. 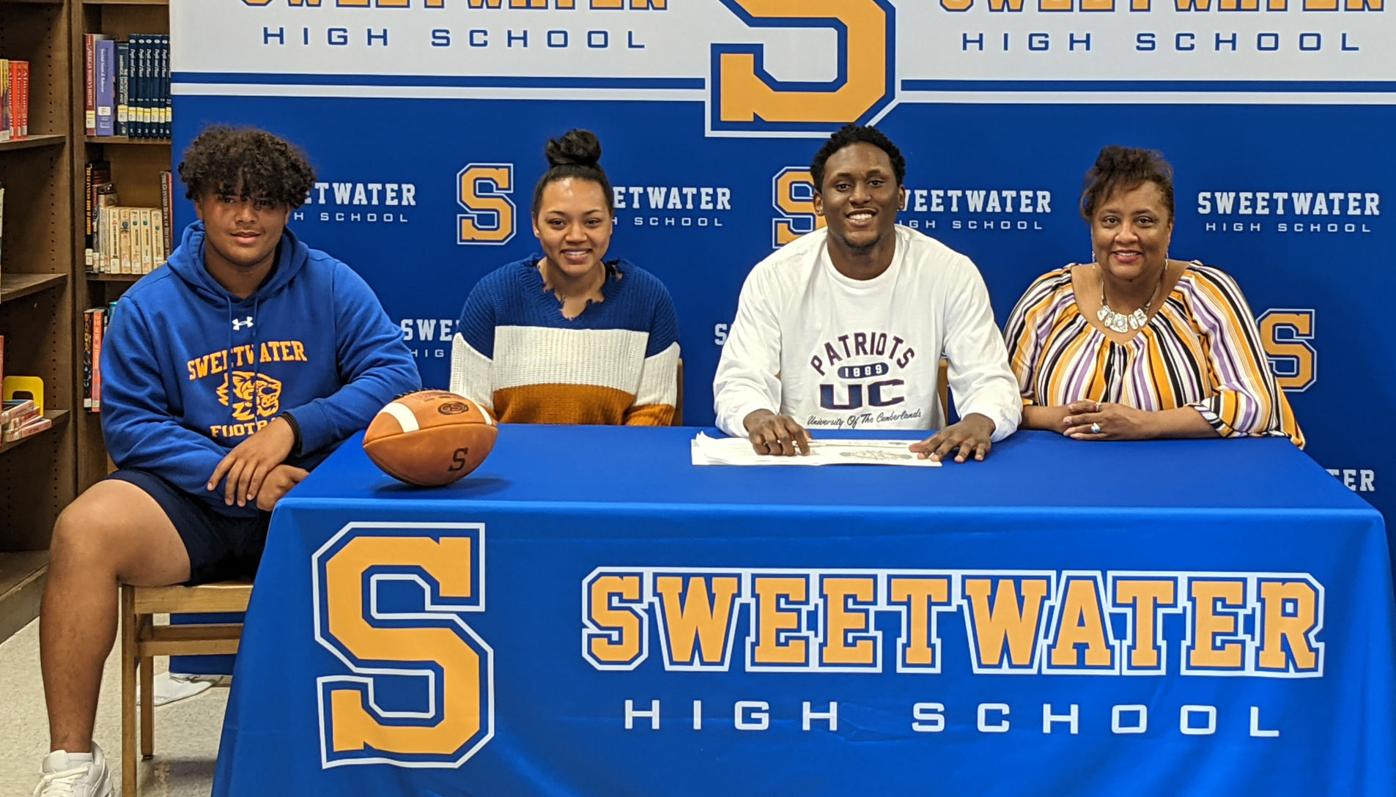 Jovan Johnkins, Tania Ward, Kaleb Johnkins and Michelle Johnkins pose for a photo during Kaleb Johnkins’s signing with the University of the Cumberlands on April 29 in Sweetwater.

Shown here, (from left) Austin Long and Kaleb Johnkins pose for a photo after signing with the University of the Cumberlands on April 29 in Sweetwater.

Shown here, (front row, from left) Vicky Long, Austin Long, Christina Long, (back row, from left) Bill Long, Travis Long and Darian Long pose for a photo during Austin Long’s signing with the University of the Cumberlands on April 29 in Sweetwater.

Jovan Johnkins, Tania Ward, Kaleb Johnkins and Michelle Johnkins pose for a photo during Kaleb Johnkins’s signing with the University of the Cumberlands on April 29 in Sweetwater.

Austin Long and Kaleb Johnkins have shared a connection for some time.

Being the starting quarterback and star wide receiver of Sweetwater football has made them grow on the field and share the highs and lows of the game together.

However, that connection didn’t end in Week 11 of high school football this past season — it will carry on to Saturdays this fall with the duo committing to the University of the Cumberlands in Williamsburg, Kentucky.

“It’s not surprising to me. They are committed and they have been committed ever since I have taken over this program. They have been here every day and worked hard. Usually those types of kids get rewarded,” Sweetwater Coach Mike Martin said. “I am tickled to death for them to have the opportunity to go to the next level and Sweetwater High School is proud of them. I am proud of them and hope they have nothing but good things ahead of them.”

Martin played a role in helping the University of the Cumberlands’ program getting to know the pair of Wildcats and when the school told Martin they wanted to extend two offers he knew they would find comfort in the similar style.

“It just kind of felt like home. We run almost the same offense,” Johnkins said. “They are a good program.”

Playing at the collegiate level has been a dream for both Jonhkins and Long. Getting to do it with a familiar face and a system that the two are comfortable in is an added bonus.

“Coach Martin had texted me that he reached out to them and they gave me on offer. I got kind of excited,” Johnkins said. “It felt good knowing all the work I put in — I get to continue playing the sport I love.”

As a senior, Johnkins averaged a first down per reception. He caught 42 passes for 531 yards and eight touchdowns. Johnkins also returned a kickoff for a touchdown and tallied two interceptions.

Johnkins’ pass break up on fourth down against Tellico Plains won Sweetwater the County Cup for the second straight season.

“He is a great route runner. I think he is one of the best route runners that I have coached. He is a natural athlete. He doesn’t care to get his nose dirty blocking from the wide receiver spot. A lot of them don’t like to do that,” Martin said. “He has all the tools too. He will just have to go in and learn the system. Once they learn the system and let their athleticism take over they will get stronger and be ready to roll.”

Austin Long, who was named the Offensive MVP for the county in 2020, threw for 1,464 yards and 17 touchdowns. The senior will hope to carry that productivity to the NAIA level.

“Obviously a big arm. He has one of the strongest arms that I have been around,” Martin said. “He is athletic enough to run the football when they need to. He has to work on his reads and the speed of the game at that level is going to be a little different.”

Weekend WR transfers close book on rough recruiting stretch even as confidence grows for 2021, beyond

In Long’s visit, he saw the same similarities that Johnkins did, and that made settling in with the Patriots an easy task.

“After we went there and we talked with assistant coach Dewyane Wells for a while he showed us film on them and we went over their offensive playbook and everything. I feel like we can relate to it a lot because it is kind of what we ran here,” Long said. “He talked about some of the years where they went 8-2 and how deep they have gone in the playoffs, so I feel like it is a very good program to follow into.”

Martin thinks the similarities will also help the duo ease into a competitive program.

Before Long made the commitment to the University of the Cumberlands, he had to decommit from Bryan College. The senior, who averaged 15.8 points per game for Sweetwater basketball, had made the decision to play basketball with the Lions before his offer for college football came through.

That left Long with a decision to make.

“I have played football since I was four years old and I started playing basketball when I was in fourth grade. Of course I had a love for both of the games, but it really just came down to the point where I had to really focus on what sport I wanted to go to school for,” Long said. “I had no football offers yet, so I figured I was going to go ahead to school for basketball, so I committed to Bryan College. Once Coach Martin gave me my late offer I had to call Bryan’s coach and tell him it was just a love for the game that I have had since I was four years old and I am going to have to stick with that. It has been a dream since I was a little kid.”

Long and Johnkins were keys to a Sweetwater program that finished 5-5 last fall.

Johnkins, who is soft-spoken off the field, credits that to Martin.

“Coach Martin has pushed me to do a lot — in the weight room and on the field,” Johnkins said.

Playing for Sweetwater, the two have made memories that they can hold on to. Even when the difficulties came along.

“It has been really hectic. It has been a lot nerve wracking because you have a lot on your plate and a lot to dish out,” Long said. “You get a lot of hate from it, but you get a lot of love from it. Once you just see the fact that you have a city backing you up a lot ... it just feels really good to come out and play, and have all the memories that I have made here at the high school. I want to thank each one of my coaches that I have had all four years. They have really turned me into the man that I am today.”

The University of the Cumberlands is under two hours away from Sweetwater — just across from Jellico over the state line. The Patriots play in the Mid-South Conference. The Patriots finished third in the Bluegrass Division in 2020.