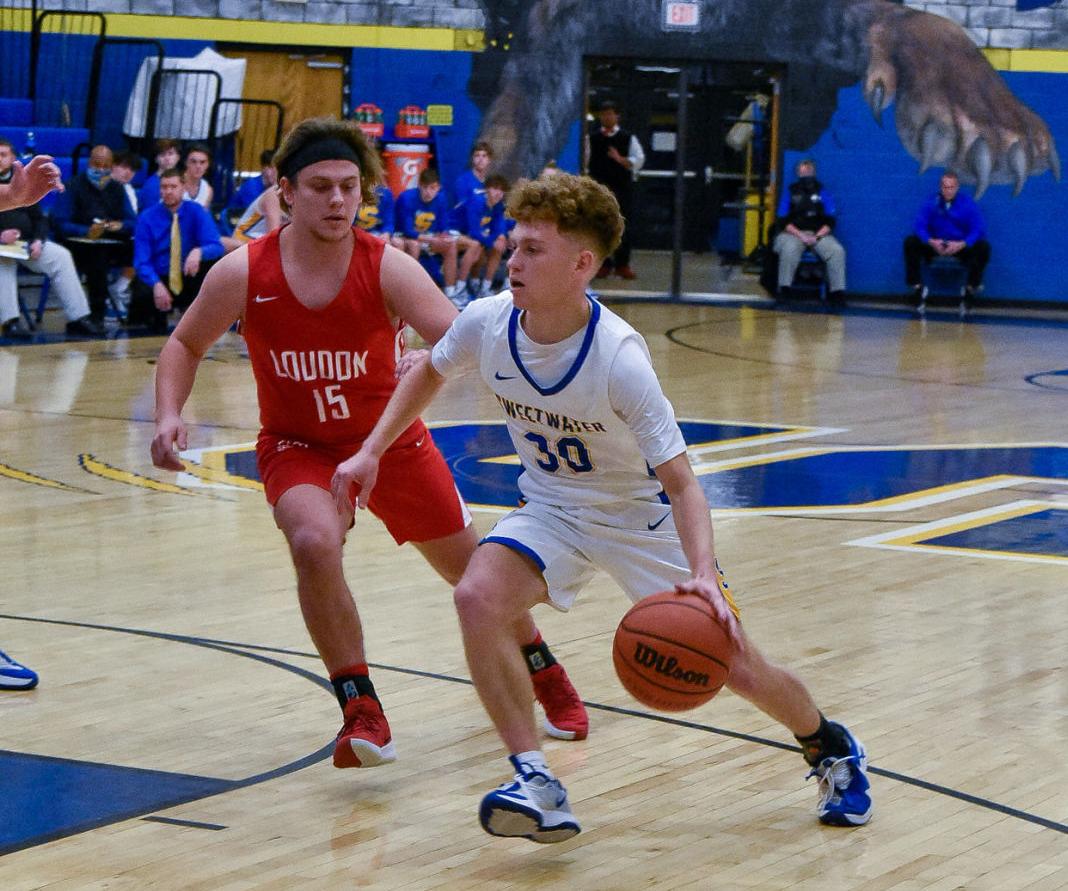 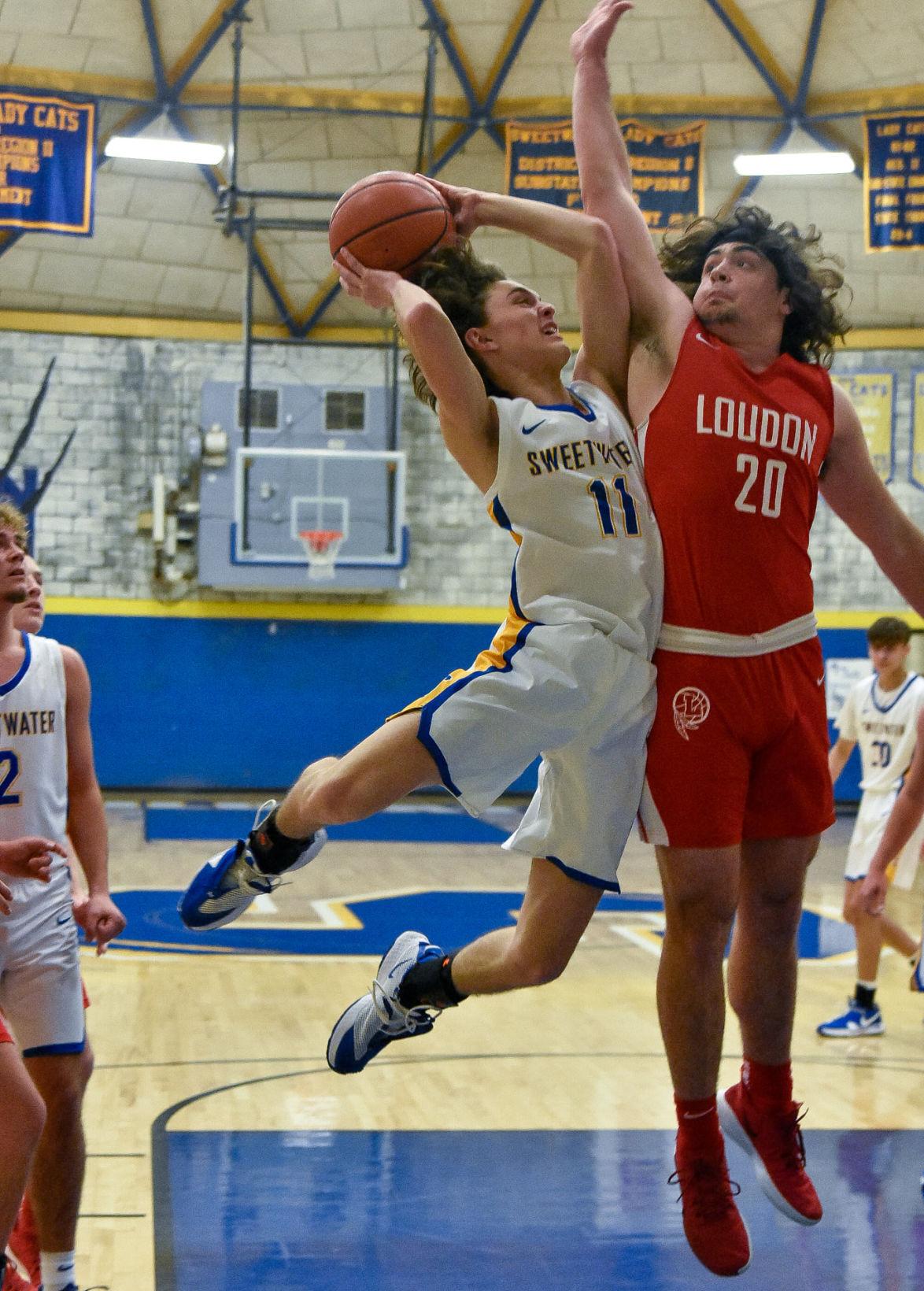 Carson Kile takes the ball to the rim for Sweetwater against Loudon's Haden Houser in the Wildcats' 60-42 loss on Jan. 12 in Sweetwater.

Carson Kile takes the ball to the rim for Sweetwater against Loudon's Haden Houser in the Wildcats' 60-42 loss on Jan. 12 in Sweetwater.

Jayce Upton put his shot off the glass and it fell into the net as Sweetwater finally found their rhythm.

Moments later, Loudon’s Landon Mallo fouled Dalen Gibby, who knocked down both his free throws. Aaron Stigall knocked down a shot on the ensuing possession. However, Gabe Leeper continued the Wildcats’ response with a basket of his own. Finally, after eight to nine minutes of work on the court, Sweetwater had cut Loudon’s early lead to two points.

Then, with less than a minute until halftime, the visitors built that lead again. Loudon’s Donavon Blankenship buried two corner 3-pointers and the guests rebuilt an eight point advantage that took Sweetwater over a quarter to file away. Loudon held on through the second half, sealing a 60-42 District 5-AA win over Sweetwater (3-3, 0-1).

Sweetwater Coach Jeremy Henderson sat alone in his office after the game. The locker room empty, he contemplated on the performance from his squad, which is searching for a successful defense of back-to-back district championships.

“I am very disappointed right now, but one thing we talked about was your character is going to show with how many times you are going to pick yourself up after you have been knocked on the ground,” Henderson said. “We have a lot of stuff to fix. We have to be coachable. A lot of it is little stuff. We come in, we break down film, we game plan and we just do not do a very good job of being mentally focused and ready to play as far as execution.”

Sweetwater started off on the wrong foot, missing their four opening shots from the floor. Meanwhile, Loudon was hitting everything in sight. Blankenship rolled in two points, followed by a Loudon 3-pointer. Keaton Harig added two more points, and the guests led 7-0 out of the gate.

Sweetwater tried to muster a response. Kade Correll went to the basket and brought in the first Wildcat points of the night at the 4:14 mark in the first quarter. However, Loudon kept burying their shots.

The Redskins had three players finish in double figures. Brody Harrison led the guests with 17 points, all coming in the second half, followed by Blankenship with 13 and Jackson Williams with 11. Austin Long led Sweetwater with 21. Upton finished with the most of any other Wildcat with eight points.

“I believe the kids are playing hard physically. We are just not very focused and not playing very smart basketball. We are not following our assignments. It has to change and it starts with me — it is my job,” Henderson said.

The Wildcats have had a tough run of things since the year started. Inconsistent performances have plagued basketball in Sweetwater and the Wildcats are still working on finding their identity. Sweetwater lost a close battle to Austin-East on Jan. 7 where they were pushed around by the Roadrunners in the paint before shooting lights out against Rhea County a day later.

“Last week I was frustrated because I felt like we got pushed around,” Henderson said. “I am still not happy, obviously, with the rebounding, but the biggest thing I see offensively and defensively is mental breakdowns. It is not being in position and not following the game plan. These kids are very, very capable of cleaning it up and capable of having a strong year. It is frustrating, but we have to come in here tomorrow ready to bounce back and see if we can clean it up.”

The Wildcats have had delays in their season, which is putting a lot of pressure onto the squad as they prepare for the final stretch. Sweetwater has only played six times come Jan. 12, and will face nine district games in a four-five week span, just to complete their season.

However, while the delays add a large load for the Wildcats in January and February, Sweetwater mathematically can control their own fate.

However, the Wildcats are going to have to start generating full performances and leave behind inconsistent and lopsided outings like 15-7 and 19-9 first and fourth quarters put up against district leading Loudon.

“We clawed back from the slow start,” Henderson said. “Loudon, you have to give it to them. That Loudon team reminds me of our team last year. I feel like by just looking at our team and the other district coaches that I have spoke to leading up to this game. Those kids are on a mission and you can see it. They are not doing anything flashy at all. They are just doing and executing their game plan. They are doing everything that we are talking about. They are boxing out, they’re in good help side position. Coach Josh Graves does a good job with those kids and he is always going to have a solid gameplan. Tonight, I knew what he was going to do. Nothing caught me off guard. He was going to keep (Jayce) Upton and (Austin) Long from getting to the rim.”

Leeper had four points for the Wildcats, followed by Wesley Bean, Correll, Dalen Gibby and Gibson Alford all with two each. Carson Kile finished with one point.

“At this point right now we really need to sit down as a team and focus on film studying and cleaning up these mental errors. It’s frustrating,” Henderson said. “Fourth quarter, I can tolerate a lot, but we are just not getting back in transition and giving up layups and stuff like that, I just can’t watch it. Let’s give some of these other guys an opportunity. Some of these guys would probably like to compete for playing time.”

Sweetwater worked the Loudon lead down to eight at the end of the third quarter, but watched their opposition build it up again when they got the ball in their hands.

“We are very capable (of turning things around). I have a lot of belief in these kids and a lot of belief in this team. I told them to go home and do some soul searching. Look within yourself, what can you do better and where are your mistakes. I am going to probably stay up half the night and do some soul searching myself. What can I do better? It is a team and a family, and we have to stick together," Henderson explained.

The Wildcats return to action on Jan. 15 when they host Meigs County.