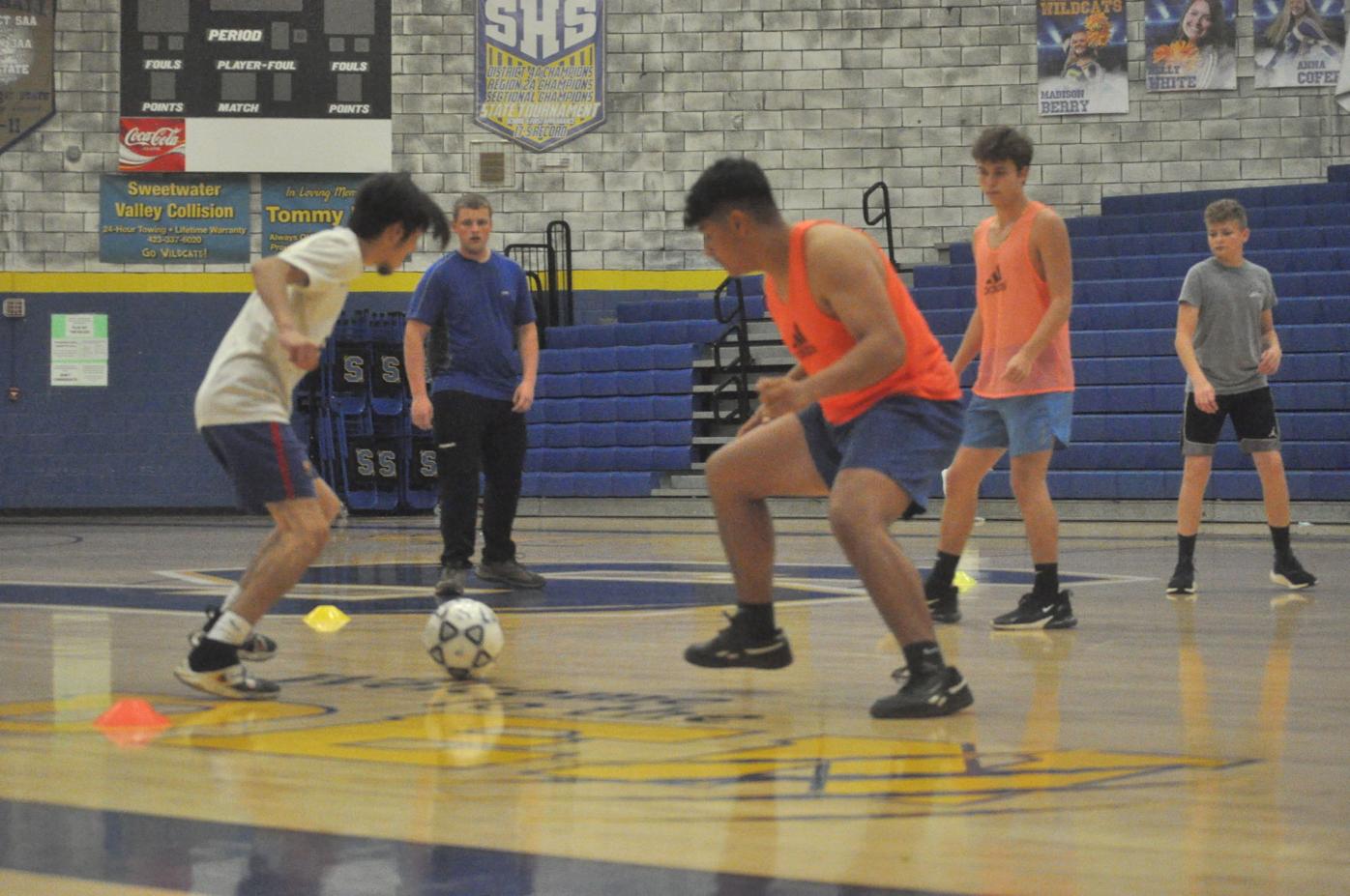 Yordi Cortez (left) looks for a pass while being defended by Jesus Guzman during Sweetwater’s practice on March 17 in Sweetwater. 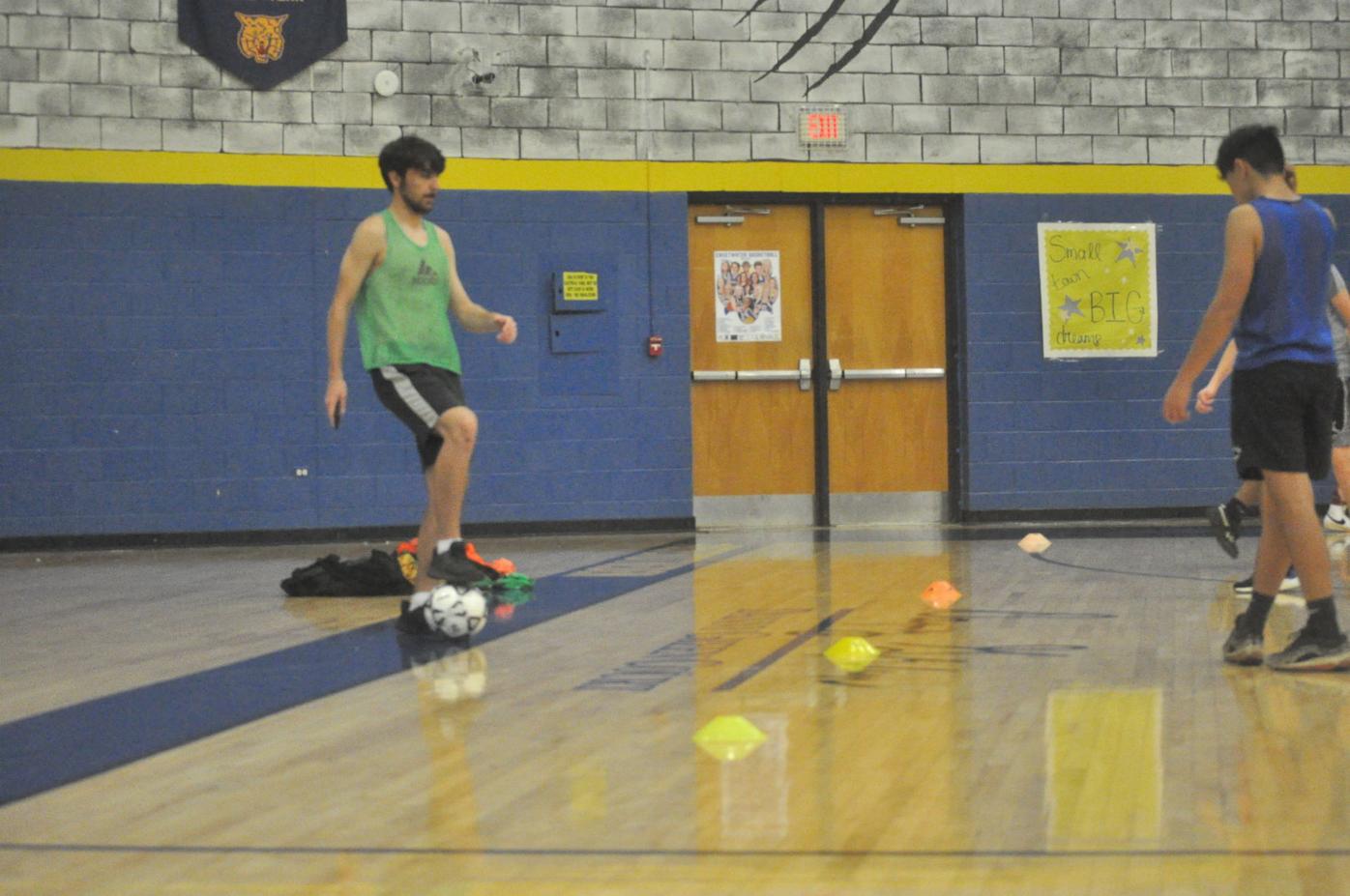 Jack Marlow looks for a pass during Sweetwater’s practice on March 17 in Sweetwater. 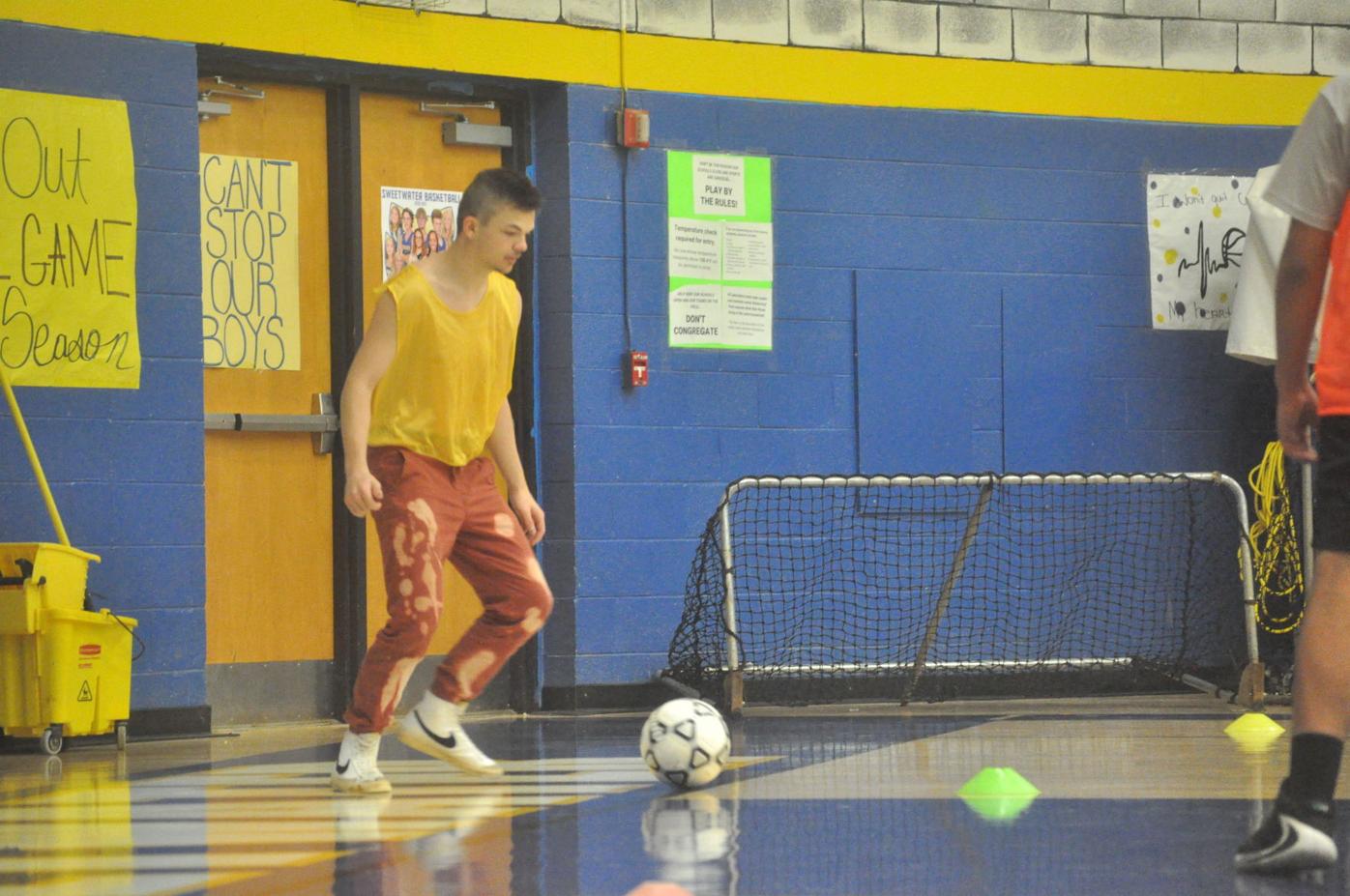 Jacob Shabdue looks for a pass during Sweetwater's practice on March 17 in Sweetwater. 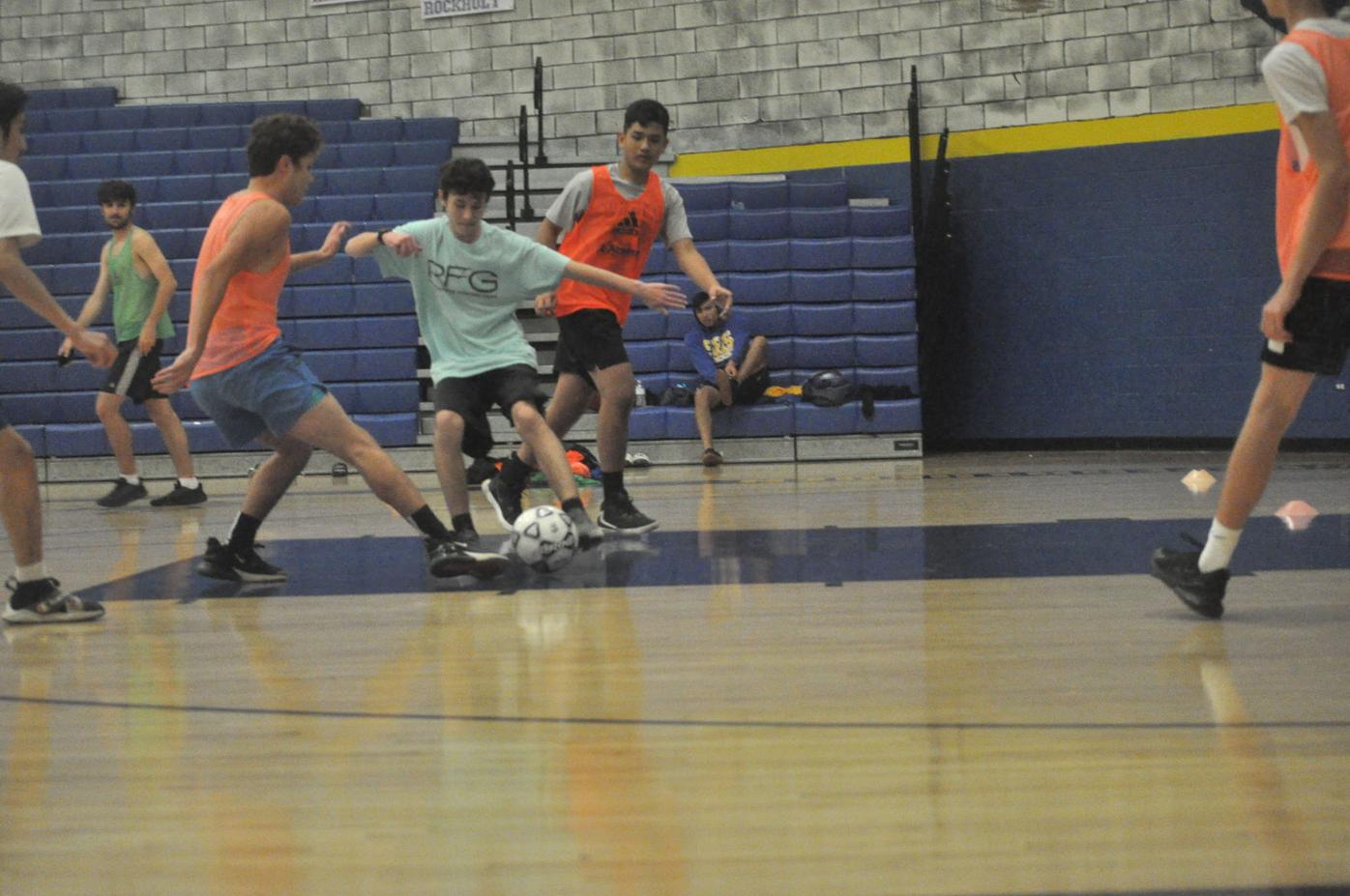 Ben Brackett (left) and Christian Contreras (back) defend against Joben Wilkins during Sweetwater’s practice on March 17 in Sweetwater. 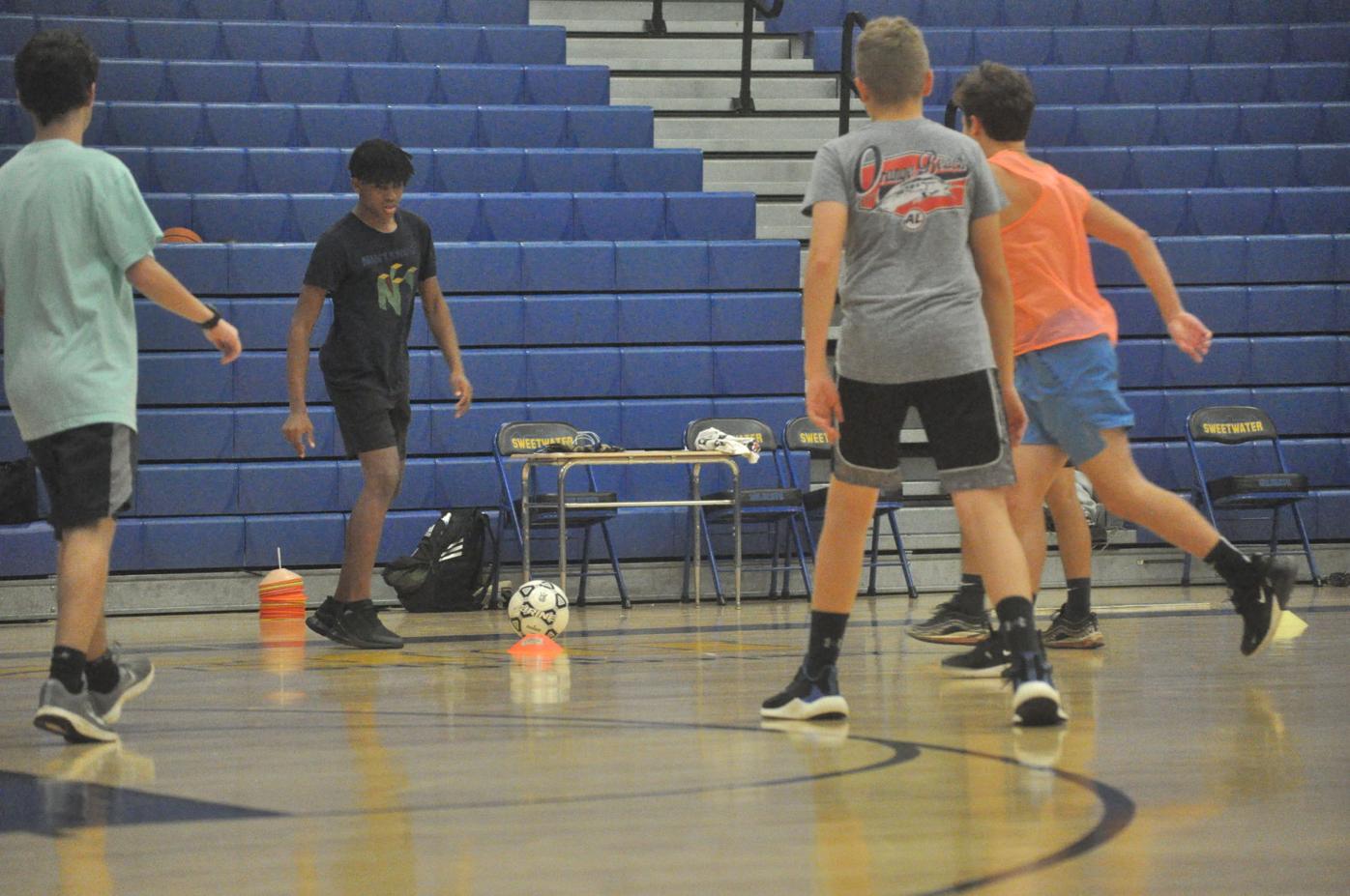 Demarth Upton looks for a pass during Sweetwater’s practice on March 17 in Sweetwater.

Yordi Cortez (left) looks for a pass while being defended by Jesus Guzman during Sweetwater’s practice on March 17 in Sweetwater.

Jack Marlow looks for a pass during Sweetwater’s practice on March 17 in Sweetwater.

Jacob Shabdue looks for a pass during Sweetwater's practice on March 17 in Sweetwater.

Ben Brackett (left) and Christian Contreras (back) defend against Joben Wilkins during Sweetwater’s practice on March 17 in Sweetwater.

Demarth Upton looks for a pass during Sweetwater’s practice on March 17 in Sweetwater.

Success for Sweetwater on the soccer field this season might come down to how they can create the best working relationship between two sects of players — the year round soccer players with the two sport athletes.

For 24-year-old coach Sammy Baker, that is his task. The second year coach will need to find ways to get his core of the team up to speed after losing that chance last season.

“We have lost a ton of time (with player development),” Baker said. “Last year we had a ton of kids that were coming out. We got to work for three of four weeks, and our younger kids coming from the junior high did not have a program last year, so we have lost a lot of time player development-wise. A lot of our guys play other sports, so this is the only time they get soccer in the year.”

Improving the relationship between the two groups will be needed for Sweetwater to compete at the level they hope to be.

“It’s been pretty noticeable,” Baker said “You get kind of your key groups and we try to split them up and keep our soccer guys with a couple non-soccer guys when we do scrimmages to make sure both teams are as balanced as we can make them. Some of our more experienced and more rounded players will kind of shy away from passing the ball away from our non-soccer guys — especially in key areas of the field. If it’s like middle of the field they can pass wide, but in the final third they would rather dribble through. In their defensive end they would rather try to dribble out or clear it out.”

Much of the preseason in Sweetwater has been spent on rebuilding those techniques — properly weighted passing, receiving the ball.

“We have kind of had to revert back this year,” Baker said. “I tell them every day that I have a u-10 girls team and we do pretty similar stuff at both practices with reteaching and relearning how to take good touches and make good firm passes. We definitely have gone back to the basics and we are just going to kind of let the early season fall as it may with that.”

Working on the same drills that a u-10 team would work on may not seem like the direction you would expect a soccer team that reached the state tournament two years ago to do, but for Baker, who is trying to continue the growth and development of the game in Sweetwater, it is about changing a mindset.

“I like to play a more possession-based game,” Baker said. “It is a lot harder because a lot of your soccer players are not actually soccer guys — they are guys coming out from other sports. We get some really freak athletes out here and I find that you play a bunch of boop ball. You might win games doing it, but it does not look good and it is not fun to watch. I like to slow the game down more, keep the ball and make those nice 1-2 passes and that is what we are trying to develop here is a little more of a calmer or cooler, collected style of play.”

Baker said he likes to play a 4-3-3, the same setup that Paris Saint-Germain of the French top division play, but with the skill sets he sees in the 2021 Wildcats soccer team he thinks he might run with a 4-2-3-1, similar to FC Bayern Munich, the reigning European and World club champions.

He also could see their youth lead the team to a simple 4-4-2.

“We are going to have a lot of younger guys on the field,” Baker said. “If I look at my starting 11 right now, I probably have three freshmen in there, so just to try to keep it simple for them and not to put too much pressure on them to not go 1v1 with seniors. The 4-2-3-1 or 4-4-2 is what we are probably going to look to do most of the season.”

The defensive midfield for Sweetwater will be key in a 4-2-3-1. Reynaldo Villeda, a senior who saw major minutes since being a freshman, will be the leadership and anchor in the back of the midfield.

Villeda has been a key player with Sweetwater and played a role in the 2019 team reaching the Class A State Quarterfinals. He will pair with one of Baker’s “non-soccer” guys.

“He is a track kid, a cross country kid. He is full engine all day,” Baker said. “Defensively, he is all over the place. If the ball is there he is on you and he usually does not just stab in and he just stays on you. He is tough to get away from.”

In attack, a lot of emphasis will be put on the two wingers and their ability to get down to the touchline. Baker wants to get them on the side where they can cut inside and open the goal up to their comfortable shooting foot.

The backline could be a work in progress. Sweetwater returns an experienced keeper in Jack Marlow, along with Ben Brackett as an outside back. There will be a pair of younger guys in that defensive setup and Sweetwater has had issues with communication and knowing when to shift across.

Marlow, a senior, had a shutout and strong performance in the short season that Sweetwater got to play in 2020, and seems comfortable with the group that he will have in front of him.

“I have known them for three or four years, and most of them I played with back in junior high, so I have had a long time to gel with them,” Marlow said.

Sweetwater is wanting to play the ball out of the back, making the familiarity between Marlow and his defenders crucial.

Brackett can play on either the left or right side of the defensive line. The junior will have the freedom, and the experience and fitness, to push up when need be.

“I will stay at home if it is a closer game. I could go up, just defending on their midfield and how open everything is. If our forwards are up and our midfield is pushed back, I will go up,” Brackett said.

Sweetwater will be dropping a sweeper role this season, which will mean more of a push from their defenders into attack.

“I think this year it will be since we are playing a four back with no sweeper, it will make us run a whole lot harder and keep us on our toes,” Brackett said.

Despite some of the development issues, Marlow sees a lot to be excited about for the season ahead.

“This is an energetic group. I am confident and we have a good chance to head on back there. The goal is to win state,” Marlow said.

The Wildcats return their leading scorer from the 2019 team, who was a freshman at the time. Sweetwater lost five seniors off the team last year.

“There are some similarities between this team and that team,” Baker said. “There are a couple guys that are there and they have that mentality. It is going to be putting them with the younger guys to try to get in that mentality.”

Sweetwater has a few games on their schedule that will prepare them for the hopes of a trip back to Murfreesboro.

The rivalry and competiveness with Sequoyah will always be there, along with Oneida, a team they met in the Region 2-A Championship in 2019.