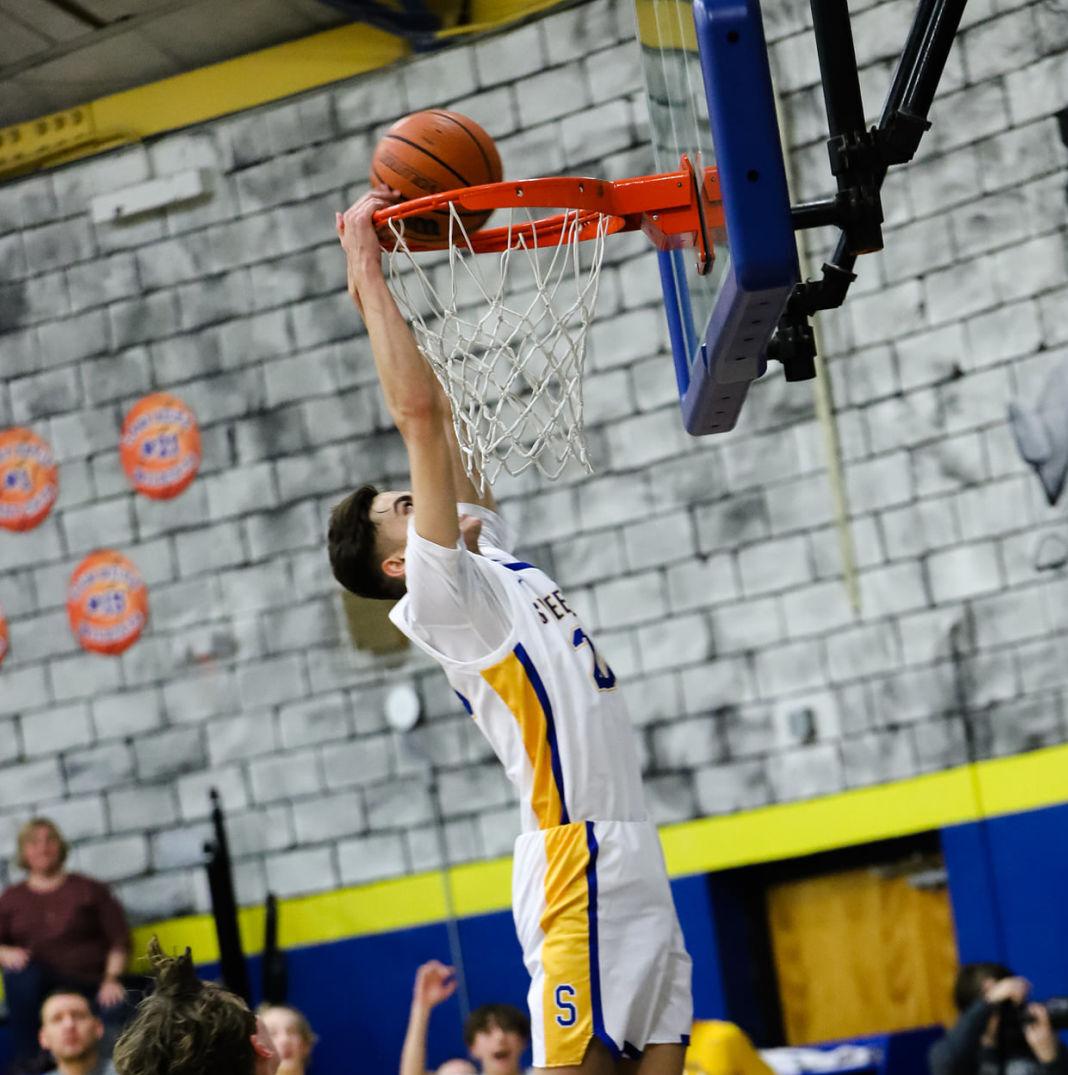 Jayce Upton dunks the ball on a breakaway against Polk County in Sweetwater’s 81-57 win in the District 5-AA First Round on Feb. 17 in Sweetwater. 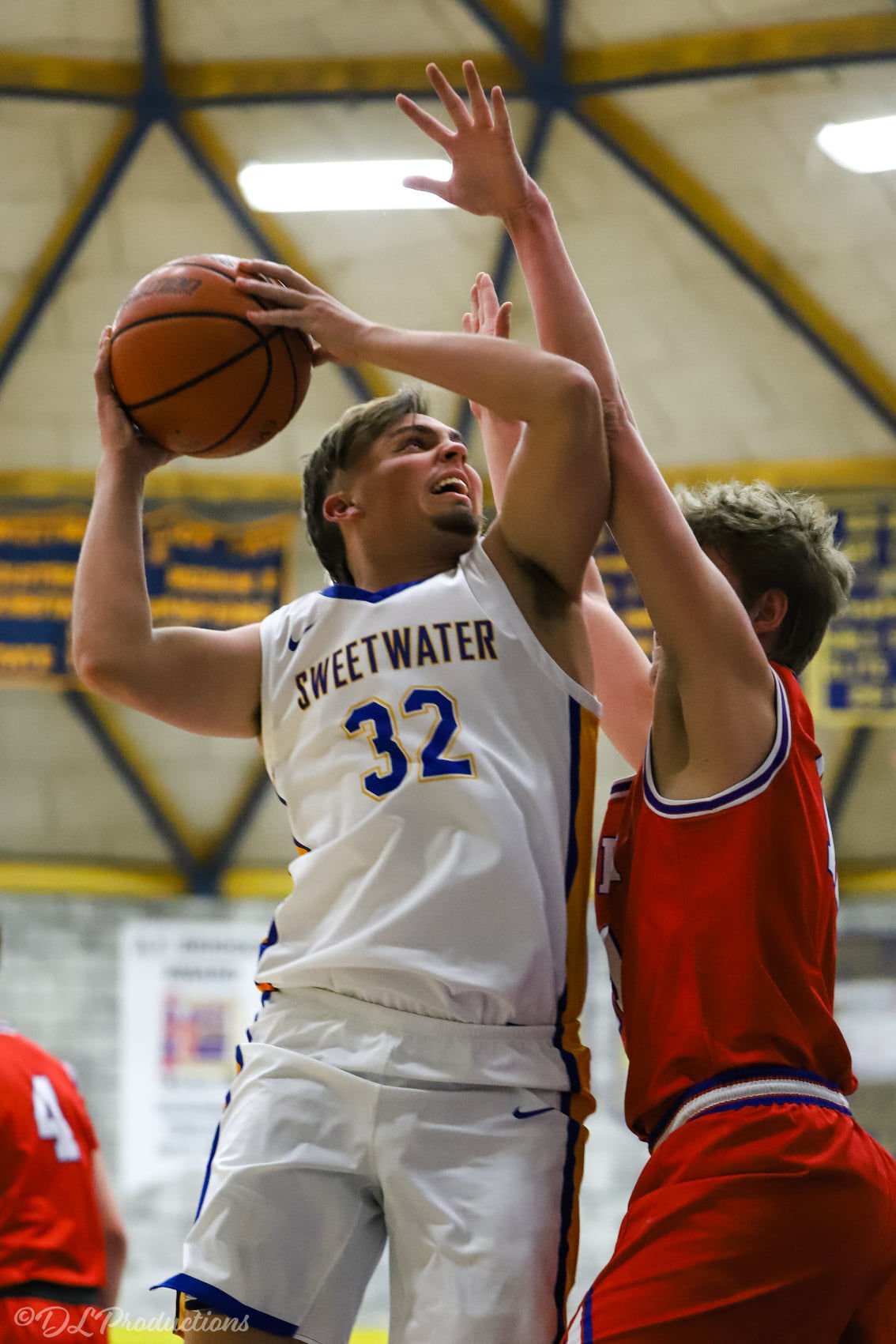 Dalen Gibby (left) battles to the basket for Sweetwater in the Wildcats’ 81-57 win over Polk County in the District 5-AA First Round on Feb. 17 in Sweetwater. 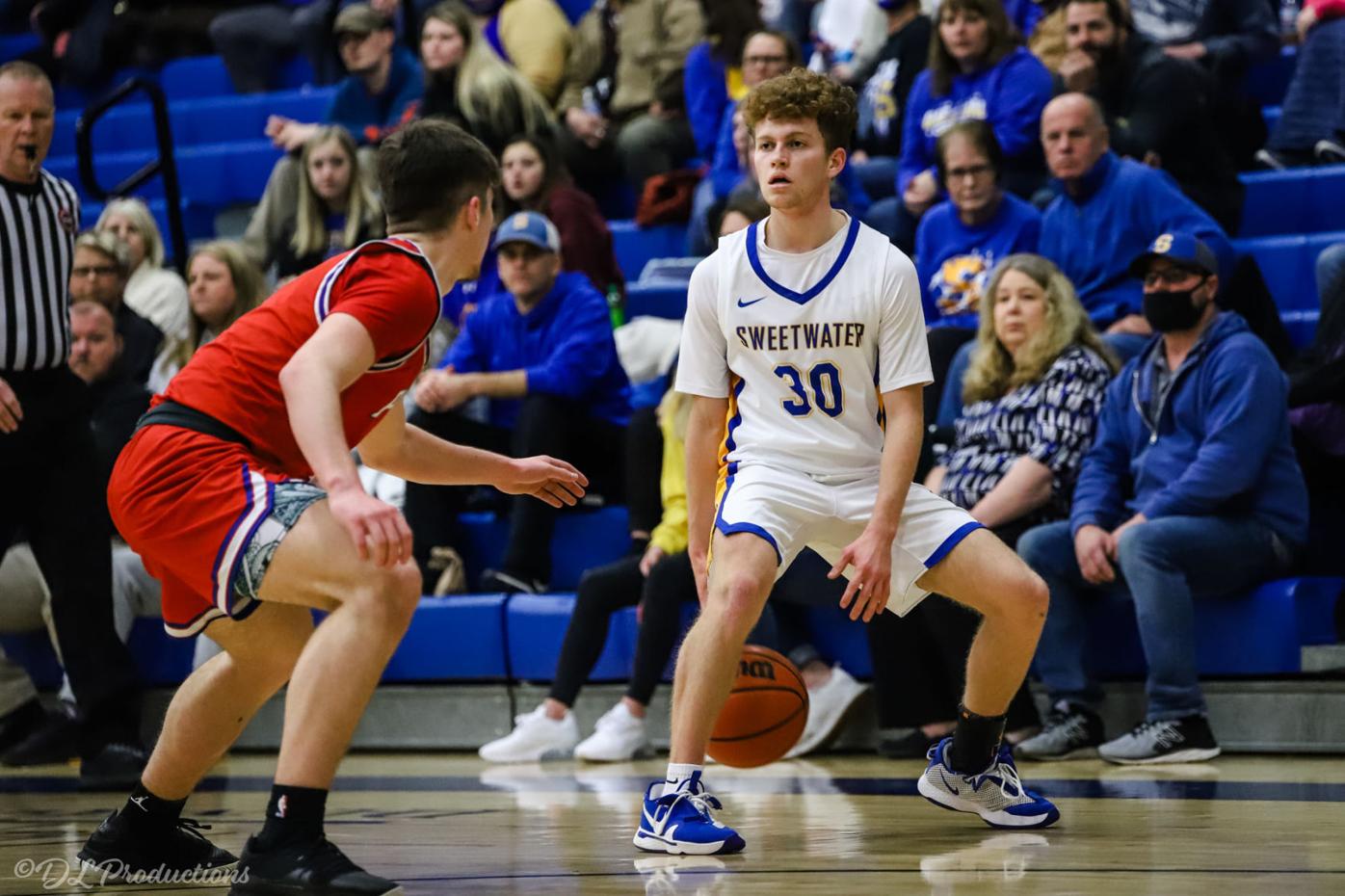 Kade Correll looks for a lane for Sweetwater in the Wildcats’ 81-57 win over Polk County in the District 5-AA First Round on Feb. 17 in Sweetwater. 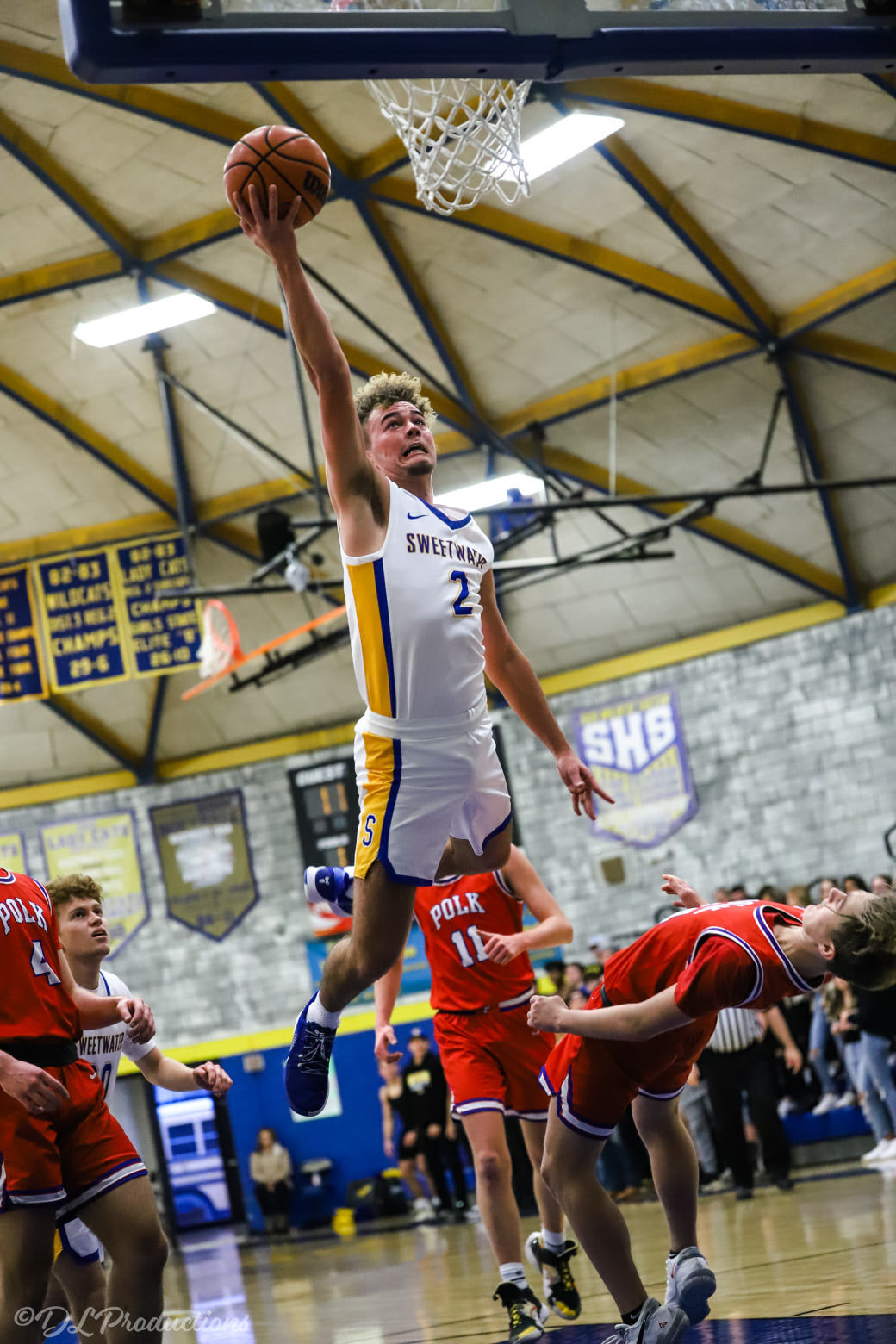 Austin Long goes to the basket for the Wildcats in Sweetwater's 81-57 win over Polk County in the District 5-AA First Round on Feb. 17 in Sweetwater.

Jayce Upton dunks the ball on a breakaway against Polk County in Sweetwater’s 81-57 win in the District 5-AA First Round on Feb. 17 in Sweetwater.

Dalen Gibby (left) battles to the basket for Sweetwater in the Wildcats’ 81-57 win over Polk County in the District 5-AA First Round on Feb. 17 in Sweetwater.

Kade Correll looks for a lane for Sweetwater in the Wildcats’ 81-57 win over Polk County in the District 5-AA First Round on Feb. 17 in Sweetwater.

Austin Long goes to the basket for the Wildcats in Sweetwater's 81-57 win over Polk County in the District 5-AA First Round on Feb. 17 in Sweetwater.

SWEETWATER — When it is tournament time there is a simple message that coaches throughout the history of high school basketball have echoed — play your best ball.

That may be what Sweetwater did when they hosted six seed Polk County in the first round of the District 5-AA tournament on Feb. 17, winning 81-57.

Coming out of the second quarter Sweetwater hit three straight 3-pointers from Wesley Bean, Carson Kile and Gibson Alford to jump out to a nine point lead they would not relinquish for the rest of the night.

Jayce Upton led the Wildcats’ (14-5) charge from the start. He finished with 18 points — matching Kile for a game high — and four rebounds. Upton capped off the night with an emphatic dunk in the fourth quarter.

Upton was rested in Sweetwater’s last game as he is still working back to 100% from an ankle injury. According to the junior — he feels great.

“It is probably the second best shooting night we had this season,” Sweetwater Coach Jeremy Henderson said. “The junk defense that they came out in we were prepared for. We tried to get two shooters in the corners and to get Austin (Long) downhill. I thought the guys did a real good job executing for the most part.”

The Wildcats built on their lead in the second quarter — powered by two 3-pointers from Kile and six points from Upton. Sweetwater scored 25 points in the second quarter, using one of their best offensive nights of the season to clinch a spot in the Region 3-AA tournament.

“It was a good all around effort,” Henderson said. “We prepped for about all you can. I don’t know what you would call that junk defense, but we saw it a couple years ago against Sequoyah, so we just went back on it and did some things we did a couple years ago. You never know this time of the year; you just have to expect the unexpected. Luckily we were prepared. (Polk) ran that against Loudon earlier this year, and we kind of had an idea that he would try to take (Gabe) Leeper, Long and Upton and try to slow them down a bit.”

Defensively, Henderson was not comfortable with the 17 points his team gave up in the first quarter. However, big runs in the second and third frames were set up by Sweetwater’s defensive shape. The guests added 15 points in the second quarter, but could not catch up with the Wildcats.

“Defensively, we did some good stuff, and threw some different looks that I do not think people expected. We have pretty much seen Polk County twice in the past 11 days. You have to expect something different. It is tournament time, and I think we did an excellent job executing what we were trying to execute,” Henderson said. “I was not very happy (in the first quarter). We had 20, which was outstanding, but they had 17, which is a little much for my liking. I thought we tightened up after that. Overall, it was a good effort from the guys and I am very proud of them.”

Sweetwater has now played Polk County three times since Feb. 5 — building up their winning margin each time — from six to 10 to now 24 points.

Saluki Football | 3 burning questions for No. 1 NDSU and SIU

“We have been playing better,” Henderson said. “Season to season, my hope is that what matters is that we are playing our best ball come tournament time, and then hopefully we are peaking at the right time to make another run and get this three-peat.”

Kile finished with 18 points as well — beating his season high he set in Sweetwater’s last game with the Knoxville Ambassadors.

“I thought Carson Kile was outstanding tonight. He shot the ball and attacked the rim with confidence,” Henderson said.

Long finished with 10 points and five rebounds. Long averages 16.4 points per game, but turned into more of a facilitator role in the opening round.

“Everybody was ready and everybody was focused up,” Upton said. “We knew they would be keying in on me and Austin and Gabe. Everyone else knew they needed to be ready to be taking shots. It was a great team win all around.”

Sweetwater has improved throughout the season — winning 10 of their last 12 games and seven straight. Henderson’s biggest message to his team has been to start playing complete 32 minutes.

Sweetwater’s result in the District 5-AA semifinal at Sequoyah on Feb. 19 will decide if they are at home or on the road in the opening round of the Region 3-AA tournament, and would see if they play a higher seed or not out of District 6-AA in the round.

“It’s closer. I will tell you this — we are going to have to have that Friday night at the Chop House,” Henderson said. “That game last time was a great ball game with two good teams. I don’t think we led until overtime. We are going to have to bring it Friday. Not only is it a big district tournament game, but is a county rivalry. I would be willing to bet that this is the last time Sweetwater and Sequoyah play in the same district with them moving up (in classification).

“I do believe we are 100% ready (to make a run),” Long said. “It is going to be a tough game, but it is always a tough game when we play Sequoyah. I got taken away tonight, and I felt like I did not need to score — I had other teammates who could score.”

Sweetwater storms past Polk County in first round; win 10 of their last 12 games